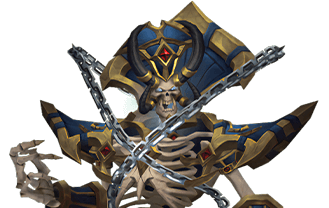 Oblivion’s Echo works just the same as heroic, a silence zone around 5 players which will create a zone on the ground after 6 seconds, which will then spawn a Frostbound Devoted add out of it.

In Mythic you should stack all of these pools on top of each other like this: 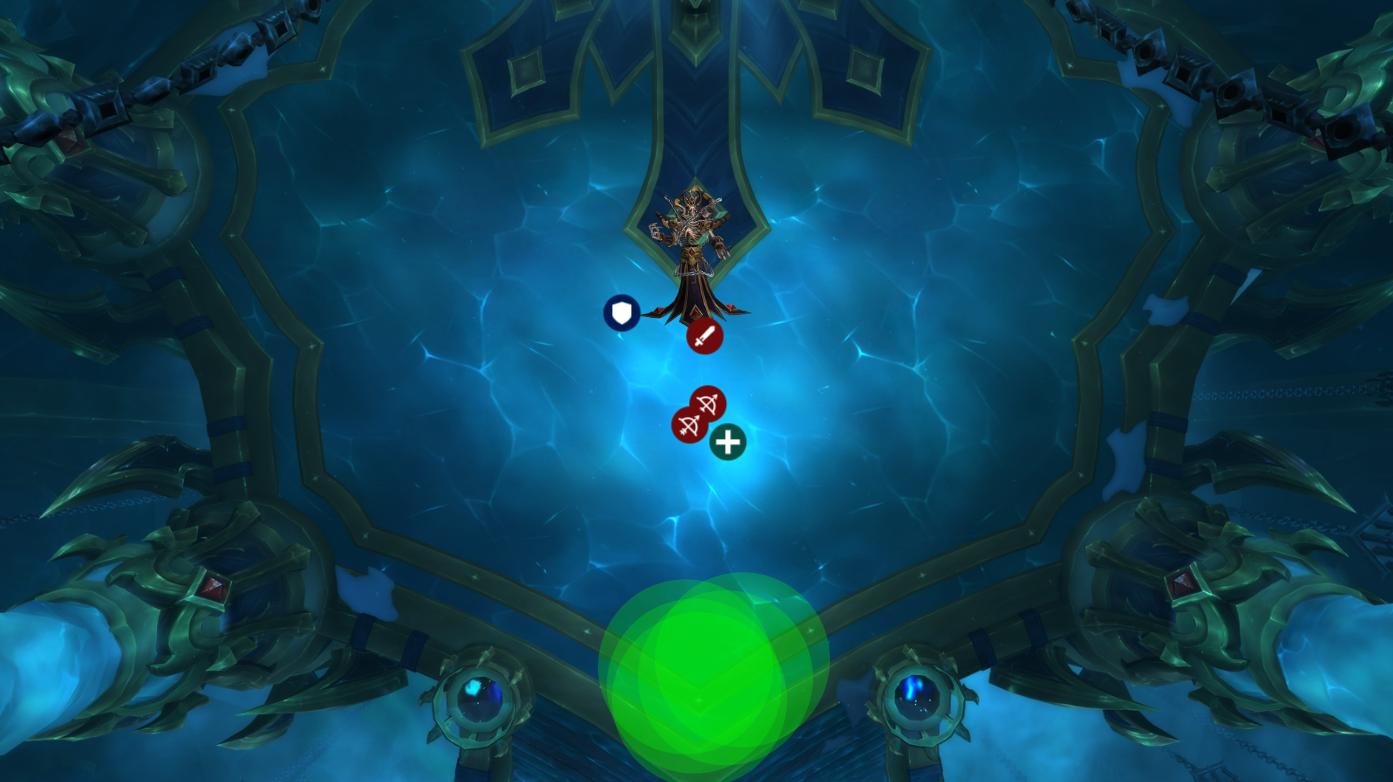 This will cause all of the adds to spawn in the same place stacked on top of each other which makes them far easier to deal with than if they were wandering all around the room.

Soul Fracture also has no changes in Mythic, however as you are stacking the Oblivion’s Echo pools at the back of the room instead of using them to interrupt the adds, your raid needs to be really good at kicking these. Boomkins are great for this as a Solar Beam will generally last most of one of these adds lifespan.

Your raid should always hard switch to these every time they spawn with no exceptions.

Once dead, the Tank needs to run around and collect their Soul Shards as on Heroic.

The boss will revive all Frostbound Devoted that have died in the phase when he casts Dark Evocation, these should always spawn on the position where you are stacking Oblivion’s Echo and can be Mass Rooted by Druids, stunned etc.

Stack Under the Boss

You should always stack these on top of each other like this, under the boss: 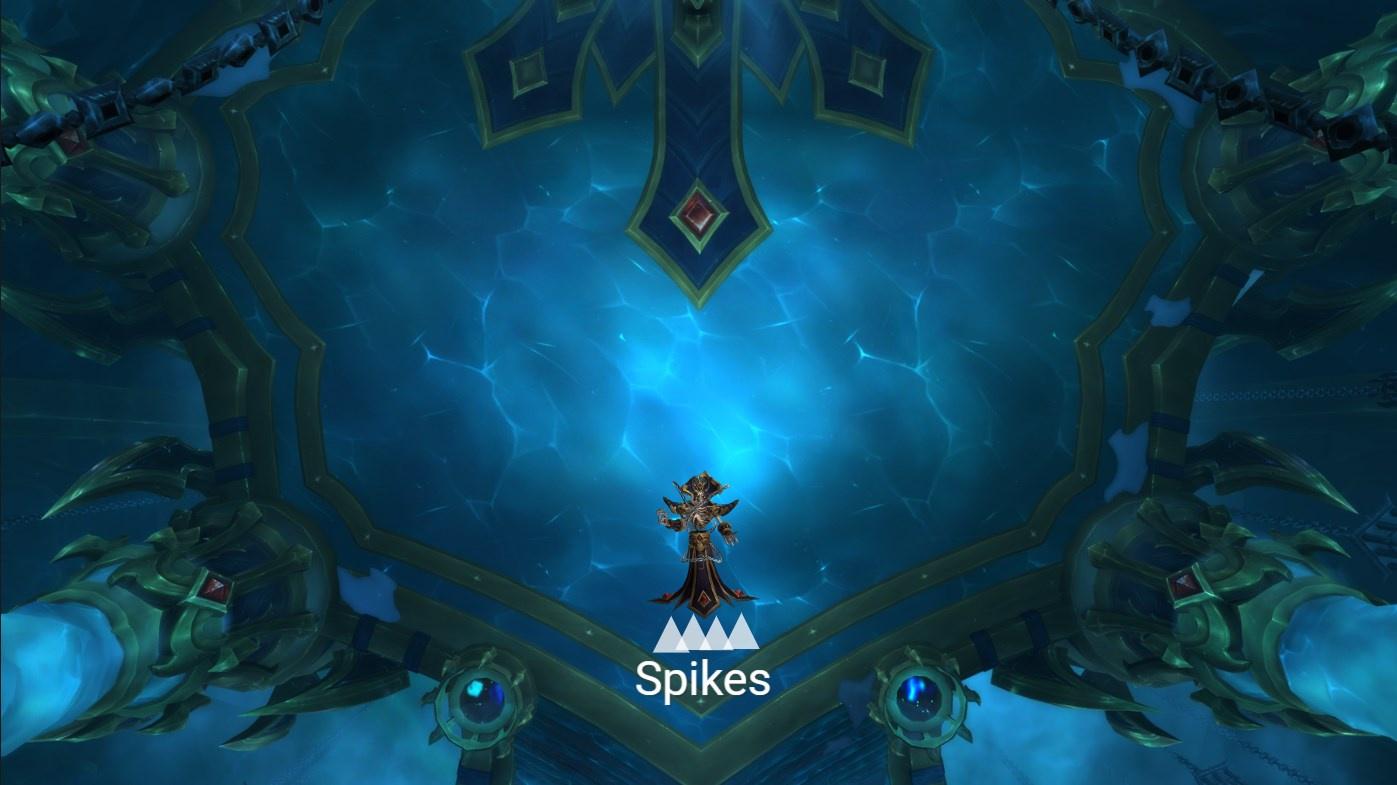 This positioning keeps them under the boss and devoted adds, which means you do not lose uptime on boss dps while handling them.

You want to aim to kill the Spikes immediately after they spawn every time, cleaving them on top of the boss and any Devoted adds that happen to be there at the time.

Once they die, the raid needs to remain inside whatever Healing CDs are up until the DoT has fallen off them.

Frost blast will happen twice in each Phase 1 segment, and can be soaked by 4 people, usually the spare Tank, Rogues, Warlocks, Druids, Demon Hunters, Death Knights with defensive cooldowns are all viable options.

Keep in mind to dispel the soakers afterwards if they need it.

This can be soaked anywhere in the room, just mark a spot for people to always go to for it fairly central but not where you want to fight the boss.

Since the recent update to the boss, this mechanic ticks for increasing raid damage and hurts a lot, especially when you are committing your healing CDs to the Spikes. You should aim to push the boss either before he casts this or not long into the cast before it kills you.

The Frostbound Devoted adds work the same way in heroic, fixating a player and exploding if they reach them (Relentless Haunt).

On Mythic we stack these in one spot as mentioned above, with the Oblivion’s Echo mechanic.

The way to handle these adds can be a little confusing to look at but it’s quite simple really. There are two mechanics that interact with these, Oblivion’s Echo which causes 5 of them to spawn, these are “new” adds, and then Dark Evocation, which causes the boss to revive any that you have already killed, at the position they died.

When the boss casts Dark Evocation you will have to fight a growing number of adds throughout the fight as they are all resurrected.

Important Note: A key factor to this boss is that you push him quickly out of each phase before he is able to cast Howling Blizzard for too long, as this will kill your raid. Maintain good dps uptime on the boss at all times whilst keeping on top of the Tank Adds.

The boss will always do his mechanics in this pattern:

When the phase begins you will need to kill a set of Soul Fracture adds, placing the first set of Oblivion’s Echo circles as you do this.

The first set of Frostbound Devoted will spawn out of these.

Then your raid needs to place the Spikes and kill them ASAP before Soul Fracture 2.

Soul Fracture 2 / Frost Blast 1 which will come close together.

Once you have handled that, you need to kill the devoted adds that are resurrected by the boss.

After this, you will have Soul Fracture 3 and Oblivion’s Echo 2 - handle the adds and soak Frost Blast 2 which will come just before the boss casts Howling Blizzard, ideally you want to push the boss before Soul Fracture 3 if you have good dps, to avoid the tank adds here.

Note that the Boss HP will become noticeably higher in each phase as you have to put more and more damage into Frostbound Devoted adds as more of them are resurrected with each Dark Evocation.

Unchanged from Heroic to Mythic, dodge the lines they send out and make sure you don’t stand on them as they spawn or you will get clapped.

Unchanged also, interrupt them with a rotation of 3 melee or 5 ranged kicks.

Have your warlock put Curse of Tongues on these to make interrupting easier.

The key mechanic of the phase, any add that is killed will be revived within 10 seconds unless the inside team push the Remnant to the correct HP to move into the next phase.

You need to bring the 2 Abominations and 3 Reavers low together, and then kill them all within that 10 second window, ideally as close together as possible.

On Mythic difficulty the Remnant will cast Foul Winds, pushing you away from it, you need to run against these while dodging the other mechanics and dpsing.

Unchanged from Heroic, dodge the blast by moving away from where the boss is aiming the projectile.

Inside
Place well and move out

On Mythic the Shadow Fissures leave behind pools which hit for 25k damage per second if you stand in them, it’s important to control your positioning and place these as close together as possible as a group to keep space free around the room.

Unchanged from Heroic, once below 20% Health the Remnant will cast Glacial Winds, a tornado that will root you if you are hit. To dodge this, take a step back away from the Remnant and then move back in once the mechanic has passed you.

Have your tanks drag the Abominations over the Reavers until they are at around 20% health, moving on so that they do not die to cleave. Once everything is at around 20%, kill the Abominations, and inform the inside team they have 10 seconds to push once the first mob dies.

Try and kill everything quickly before the Remnant team push out of the phase or the mobs will gain 500% damage and CC immunity and people will die.

Phase 3 is very simple, and basically the exact same as heroic.

Pop Bloodlust and nuke the boss, dealing with the Frost Blasts he spams out in this phase. Soak the first two or three with immunities/raid, and then start sacrificing any more that you get.

Make sure to interrupt the Soul Reavers in this phase or they will kill people and Dodge the lines from the Abominations. Not a lot else can go wrong here, so unless you do not interrupt then it is hard to wipe in this phase.

I would recommend putting the boss on top of Soul Reavers that spawn if the ice patch RNG allows for it.

This fight is quite straightforward from a healing perspective: most of the raid damage comes from Frozen Destruction caused by Glacial Spikes’ eruption, which will inflict a big raidwide hit and will apply a DoT for 10 seconds. With 5 or 6 spikes erupting at the same time this damage can be lethal, however, by using the most common strategy the raid will have all healing and DR cooldowns available for every set of Spikes, which negates the mechanic as long as CDs are chained properly and the raid is stacked.

Outside of that, there’s not much else happening: Healing inside the phylactery is quite trivial and just requires the healer to be stacked with other DPS. Piercing Wail from tank adds should be interrupted / CCed, Frost Blast is generally soaked only by a couple of DPS with a beefy personal, and ramping up damage on the very last phase is usually negated by Bloodlust / Heroism and how quickly the boss dies.

All of that means that there is no need for more than 3-4 healers on this fight, with 4 being the preferable amount.

The healing composition I would advise would be as follows (just a personal recommendation, not by any means the only viable comp):

Constantly keep an eye on KT’s health during Phase 1 - tell you raid to stop DPS when you need to.

Remind players assigned to early kicks in P2 not to try and interrupt the last set of Soul Fracture adds in P1 before you phase.

Keep a very close eye on that Glacial Wrath 2 timer and make sure the boss dies before it finishes.

Give a clear 10 seconds warning to the Remnant team when the first mob dies outside, and tell everyone outside to pump as hard as they can and kill everything. 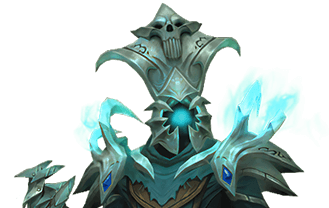