The Death Knight class tree is incredibly strong and offers a good variety of talents that allow Blood access to many things we haven’t had recently. We’ll go over some of the core talents, ones that you will be taking no matter what and that have a direct impact on how you play, and then situational and utility talents.

Improved Death Strike is a very powerful talent that we gain access to very early on into the tree. The 5% increased Death Strike healing is nice, but the real power comes from the 5 runic power cost reduction. This, tied with other talents like Ossuary, allows us to cast Death Strike very frequently due to the heavily reduced runic power.

While it looks rather bland, Permafrost tied with other talents like Gloom Ward and Icy Talons on the class tree, and Sanguine Ground on the spec tree, become a very powerful passive ability. Being a 2-handed weapon spec, Blood’s melees typically hit for a decent amount. This tied with the auto attack speed increase from Icy Talons and haste, along with the absorb size increases from Gloom Ward, Sanguine Ground, and Vampiric Blood, allow for Permafrost to be quite a potent talent and absorb a lot of damage that comes your way.

Gloom Ward is another simple, but very powerful talent. A flat 15% increase to absorbs is incredibly powerful once you start looking at how many absorbs blood actually has. Permafrost, as mentioned above, Anti-Magic Shell, and Blood Shield, from our mastery (Mastery: Blood Shield), all benefit. Gloom Ward also increases the value of external absorbs as well. So abilities like Power Word: Shield and Life Cocoon are increased, as well as trinkets like Decoration of Flame from Eranog the first boss in Vault of the Incarnates.

Unholy Endurance is actually a rework of a mainstay Conduit from Shadowlands, Hardened Bones. In fact, it’s been buffed from its Shadowlands version to give even more damage reduction as well as increase the duration of Lichborne by 2 seconds. This adds another powerful cooldown to Bloods arsenal and is definitely a must take.

One of the many talents that buffs Death and Decay, Unholy ground provides you with 5% increased haste while standing inside your Death and Decay. Similar to Improved Bone Shield and many other haste effects, this effect is multiplicative.

Will of the Necropolis

This staple of Blood is making a return yet again and is just as potent as ever. This effect allows you to dip below 30% without much worry and provides a very good safety net. I will note that even though the game displays Will of the Necropolis as an absorb, and things like Details! and Warcraft logs treat it as one, it is not affected by Gloom Ward, and it showing up as an absorb is just the game’s way of presenting it to you.

While at first Death’s Echo looks like a simple quality of life talent doubling the number of uses of various abilities, it is actually much more powerful. Death’s Echo allows you to maintain an incredibly high uptime on Death and Decay, and with all of the very powerful benefits that multiple talents give Death and Decay, this makes Death’s Echo one of Blood’s most powerful and important talents. The quality of life from the second charge of Death’s Advance and Death Grip bring only further increase the value it has.

The 18% increased auto attack speed that Icy Talons gives is a very strong effect. Not only does it increase the amount of damage that our auto attacks do, but it also provides a lot of defensive benefit from Permafrost, and minor benefit from Runic Attenuation. In fact the benefit is so potent that you should strive to have 100% uptime on this buff throughout any encounter.

Empower Rune Weapon provides you with a flood of resources on a relatively short cooldown. Providing 5 runes and 20 runic power over its duration as well as being your own personal Bloodlust with the 15% haste it provides makes it one of the most powerful talents on the Death Knight class tree.

I included both of these talents here because you can only ever take one of the two. They both have their uses, but the majority of the time in 10.0 you’ll be taking Abomination Limb. Soul Reaper is VERY strong on pure single target fights, especially with the change to be copied by Dancing Rune Weapon and the rework of Eternal Bond to have the second weapon apply its own debuffs. However, the second there is more than one target Abomination Limb becomes the play. Abomination Limb really helps with Bone Shield management, burst damage and threat, and is great utility to boot.

Gaining access to Blinding Sleet is very good for Blood. It’s an uncapped aoe stop that doesn’t share diminishing returns with many other stops. It’s relatively short cooldown of 1 minute and the 50% slow afterwards make it a very powerful tool for M+.

Anti-Magic Barrier has been incredibly powerful for a very long time, it just had the unfortunate situation of sharing the row with Will of the Necropolis. Now, with the talent trees, we gain access to it with very little cost. In situations where AMS is good this talent just makes it better.

Anti-Magic Zone is a great raid cooldown that Death Knights bring. 20% magic damage reduction is very strong in certain encounters and your raid leader will love you for taking it. Do note that it is not increased by Gloom Ward despite stating that it is an absorb, this is similar to how Will of the Necropolis is treated.

The single target stun we have come to know and love is still available to us.  Although Asphyxiate is a bit outshined by Blinding Sleet, there are certain situations where it’s still very powerful and it’s a good tool to have in Blood’s toolkit.

Blood Scent and Suppression are near worthless to a Blood Death Knight and should not be taken. You get more of what they are trying to give from many other talents.

Chains of Ice is a button you almost never ever press as Blood, so spending a talent on Proliferating Chill point to make it hit an additional target is worthless and should be avoided at all costs.

Death Pact is just a worse Death Strike on a two minute cooldown with downsides. Never ever take this.

Unfortunately the Blood trees don’t allow for much variation so your tree for M+ looks the same for raid.

The core talents for Blood

Dancing Rune Weapon got a major upgrade coming into Dragonflight. Getting the legendary power of Crismon Rune Weapon as a talent in Insatiable Blade, and the best part of the season 3 tier set in Eternal Bond greatly increases the power of this cooldown. Additionally, the second rune weapon summoned with Eternal Blade was fixed to now duplicate your abilities properly. Previously, the original weapon would cast every ability twice and the second weapon would just melee. This means that you would not get 3 stacks of Blood Plague or 3 instances of Soul Reaper before, but you do now. Overall it’s not a terribly huge buff, but it is still a significant fix and worth noting.

Another reason to always be inside Death and Decay. Sanguine Ground 5% damage increase and 5% healing increase is nothing to scoff at. This talent alone would be enough to warrant standing in Death and Decay as much as possible.

This talent does an absurd amount of damage, both on single target and in AoE, and is the biggest reason to strive for 100% uptime on Death and Decay. The damage done by Shattering Bone is tripled while you are inside Death and Decay. This, on top of it being uncapped AoE makes this talent one of the strongest ones on the Blood spec tree.

Bloodshot is absolutely amazing. Currently how the game works is that when you Death Strike, Blood Shield (from Mastery) is applied before the damage event, meaning you get the 25% physical damage increase to every single Death Strike. However, this is a bug, and the devs have stated that they will fix it, but until they do this talent is an incredibly potent damage option for both raid and M+. Once it’s fixed, you’ll likely drop it for M+, but it will still be worth it in raid.

Red Thirst got a bit of an upgrade coming into Dragonflight. At 1 point it reduces Vampiric Blood by 1 second per 10 runic power spent, at 2 points it’s increased to 2 seconds per 10 runic power. While that second point sounds very good, it’s actually a bit of a trap. The total uptime of Vampiric Blood at 2 points is around 45-50%, compared to the 40% uptime that 1 point brings. This means there really isn’t much value in investing a second point into Red Thirst except for very specific encounters like Rygelon from Sepulcher of the First Ones.

Tombstone has had a hell of a glow-up the last few tiers. While the spell itself hasn’t changed, the interactions it has with other abilities has caused its value to skyrocket. In season 3 and 4 of Shadowlands it was primarily used to reduce the cooldown of Dancing Rune Weapon to obtain very high levels of uptime on the ability. Now, in Dragonflight, it does so much more. In fact, it does so much that it has become our single most important and impactful cooldown. When you use Tombstone correctly it will:

Proper usage of Tombstone will make or break how much damage you do.

The yellow path is your core path through both trees, you’ll be taking these always. The green nodes are core points as well, except you only put 1 point into them. The purple nodes are your utility choice nodes. On the Class tree you have 2 points to spend on purple nodes. My recommendation is taking Blinding Sleet and either Anti-Magic Barrier or March of Darkness. On the Spec tree you only have 1 free point unfortunately, but there really isn’t that many choices so it’s fine. You can take Bloodworms for more damage and a bit of healing, or Gorefiend’s Grasp if you want even more grips. The orange path on the Class tree is there for if you want access to Purgatory. In M+ you’d drop Bloodshot for Heartrend and use the extra point for Purgatory.

Additionally, with the 2 piece in keys, you can drop Leeching Strike and Blood Tap, for Reinforced Bones, and Bloodworms for Heartrend and the extra point for Purgatory. 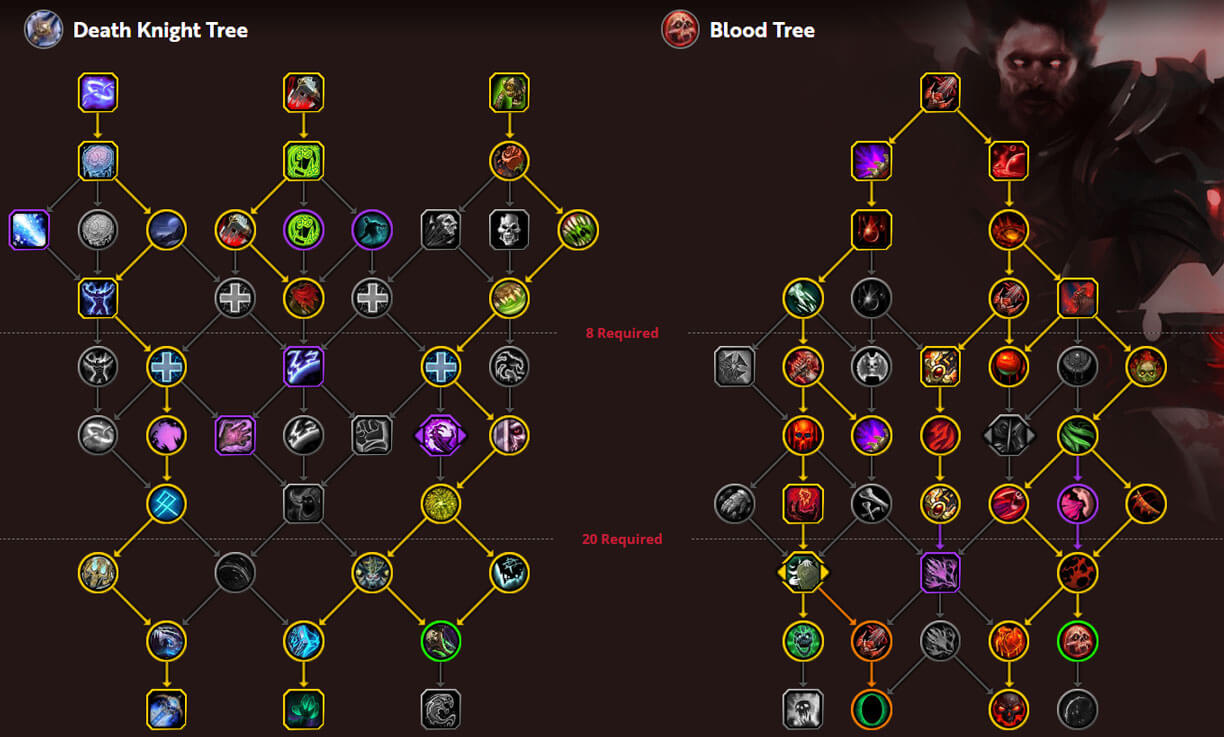 In raid your choices don’t really change much. On the spec tree, Anti-Magic Zone becomes a bit more enticing, and Anti-Magic Barrier will definitely have use on many fights in this tier. Also, you do get a bit of choice for single target vs cleave and AoE. Soul Reaper is a very potent talent for pure single target fights, like Terros. You drop Abomination Limb and one point in Rune Mastery to get access to it. However, once there is more than 1 target for most of the fight, Abomination Limb pulls ahead significantly. On the class tree nothing really changes for your choices. The biggest thing that changes is if you want access to Purgatory, you drop Hemostasis instead of Bloodshot to get the extra point needed to reach it. 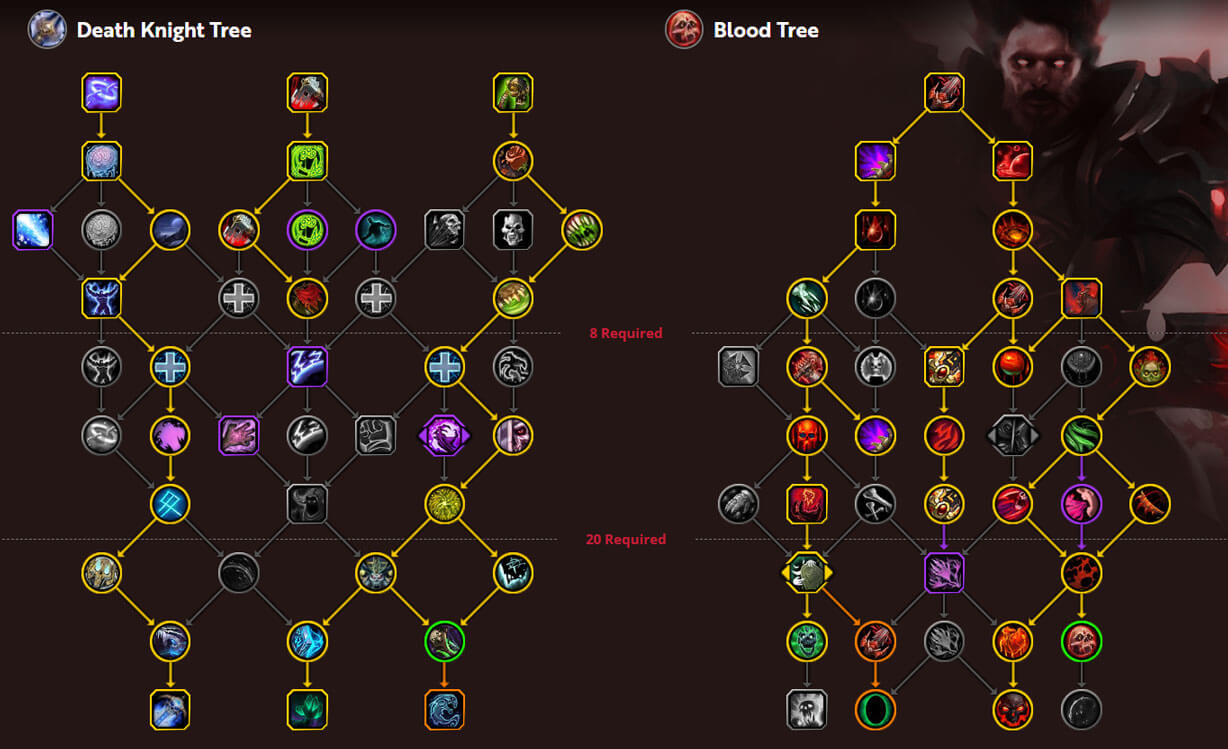