News What is going away with Dragonflight and Season 4

What is going away with Dragonflight and Season 4

Shadowlands Season 4 ends the week starting 25th of October, 2022 (at 10pm the night before maintenance begins in each region), the Dragonflight Pre-expansion Patch is October 25th, 2022 and World of Warcraft: Dragonflight releases on the 28th of November, 2022.

Blizzard have confirmed that Phase One of the pre-expansion patch will start on October 25th, 2022 and Phase Two will begin November 15th, 2022. Notably, the new Race/Class, Dracthyr Evoker will be available in Phase 2. You can read more about what is available in each phase in their article.

Unfortunately, after each of this dates, some mounts, titles and rewards will be removed. So, in this article, we will talk about what they are removing from the game and hopefully help you get these rewards before it's too late. 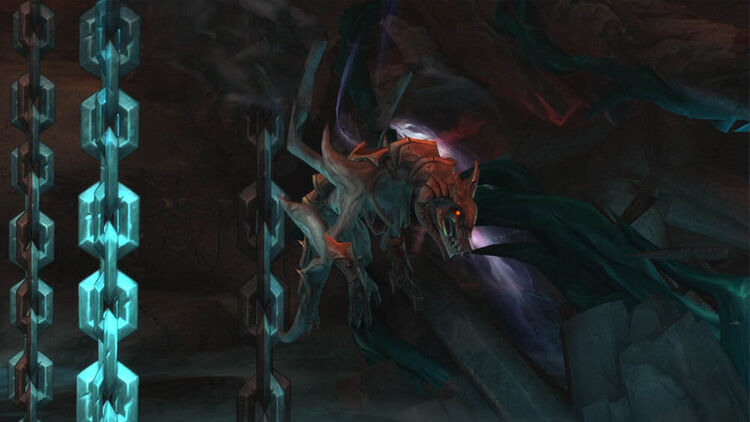 The Eternal Gladiator's Soul Eater mount is being removed from the game when Shadowlands Season 4 ends the week of October 25th, 2022. To get this unique-looking mount, you need to get the Gladiator: Shadowlands Season 4 achievement by winning at least 50 3v3 arena matches with a rating above 2400. However, if you want the “Eternal Gladiator” title, you must be in the top 0.1% of players in the ladder after Season 4 is over. 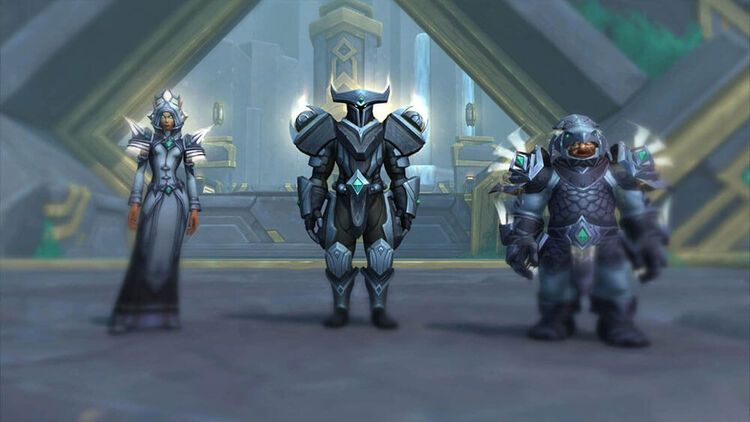 The Elite PvP Armor set is much easier to obtain than the Gladiator mount and title. To unlock the entire armor set, you need to reach a PvP rating of 1800. If you reach 2100 rating, you will unlock an additional Weapon transmog and illusion (Eternal Flux).

You can see below, the PvP rating that is required to unlock the individual pieces. The color for these sets are the same as in season 3, so if you already got them in the previous season, you don’t have to worry about getting these ones.

When the season ends the top 0.1% players in each region, based on Mythic+ score, will be locked in and be awarded the Shrouded Hero: Shadowlands Season 4 achievement that rewards the Shrouded Hero title.

The Winds of Wisdom 50% Experience Buff

The Winds of Wisdom buff grants a 50% increase to experience gained for characters between level 10 and 59.

The buff was first active on October 4th, and according to Blizzard's news post, will be going away "when the new Dracthyr Evoker becomes playable during the Dragonflight pre-expansion patch". The new Evoker class will be available to play in Phase 2 of the pre-expansion patch on November 15th, 2022, so that is when we assume the Winds of Wisdom will go away.

This experience bonus is great for getting your characters leveled to 60 before Dragonflight or having more characters available for farming mounts. If you have been putting off leveling some characters, now is the time to do it!

It seems that although Season 4 ends before Dragonflight, according to Blizzard's news post outlining some of the deadlines, the Restoration Deathwalker Mount and Mythic+ Dungeon Teleports will be achievable up until Dragonflight is released. 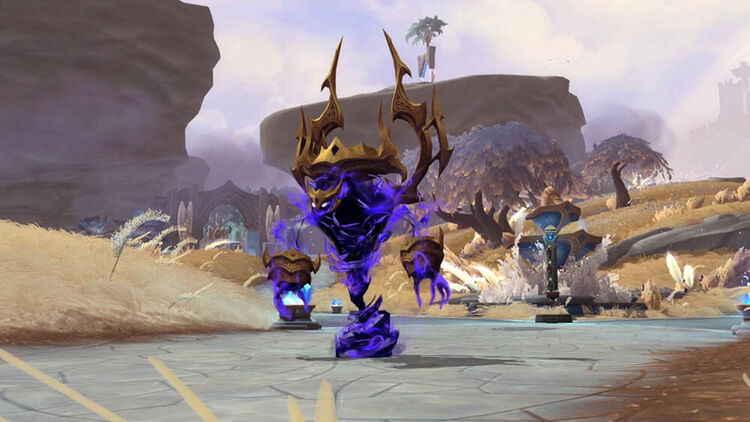 To get the "The Shrouded" Title, you need to reach a Mythic+ rating of 1500 to complete the Shadowlands Keystone Conqueror: Season Four achievement.

If you didn’t get any of the Mythic+ season reward mounts in Shadowlands then this is your last chance to get one. To earn the Restoration Deathwalker mount, you need to complete the Shadowlands Keystone Master: Season Four achievement by earning a Mythic+ rating of 2000 or higher during Season 4.

Timing a Mythic+ dungeon at a level 20 key or above will reward you with permanent teleport to that individual dungeon. The “Mega Dungeons” (Karazhan, Tazavesh and Mechagon) require you to complete both parts of that dungeon to unlock the respective teleport; complete both Workshop and Junkyard at level 20 or above in-time to unlock the Mechagon Teleport.

Unlocking these dungeon teleports may not be gone for good because mythic+ dungeons will rotate every single season in Dragonflight, but here are the teleports you can earn in Shadowlands Season 4 by completing the following achievements: 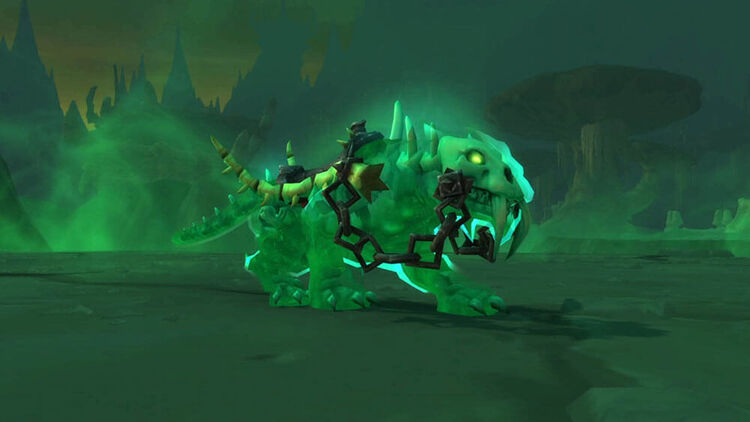 One of the biggest features in Season 4 was the introduction of Fated Raids. Unfortunately, they are going away with the launch of Dragonflight, which means their rewards are also being removed.

The fated raids are currently on a weekly rotation, so it takes 3 weeks to get these rewards because the achievements require you to complete all 3 fated raids in Shadowlands. However, when the Dragonflight pre-patch releases, all raids will become fated, and you no longer have to wait for the raids to rotate which one is fated.

These are the rewards for defeating all bosses in each of the fated raids on Normal, Heroic & Mythic difficulty:

Completing the raid on a higher difficulty also counts towards your progress of the lower difficulty achievements. For example, completing all bosses on Mythic difficulty will unlock all of the Normal and Heroic rewards.

It’s worth noting that although progress towards each achievement needs to be done on a single character, the raid teleports are account-wide once unlocked, so you can use them on your other characters that haven’t completed the achievement. This will be helpful in the future for farming Transmog or the mounts that drop from The Nine, Mythic Sylvanas and Mythic Jailer on multiple characters. 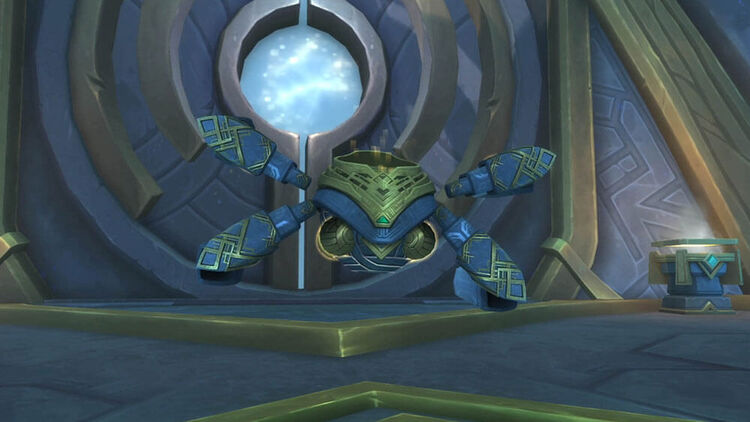 The Carcinized Zerethsteed mount can be obtained by defeating the Jailer on Heroic or above difficulty in Sepulcher of the First Ones. Once you have defeated the jailer, he will drop everyone an item called Almanac's Echo. This begins the Leading Motives quest to simply bring the Almanac's Echo to Firim in Exile's Hollow (Zereth Mortis) and rewards you with this amazing looking mount.

If you’ve been away from the game and you are just getting back into it because you want to prepare for Dragonflight, it might be tough to get a group. Luckily gearing in season 4 is a lot easier, and a lot of content creators on twitch, including Method streamers, are doing community runs. So be on the lookout for that! 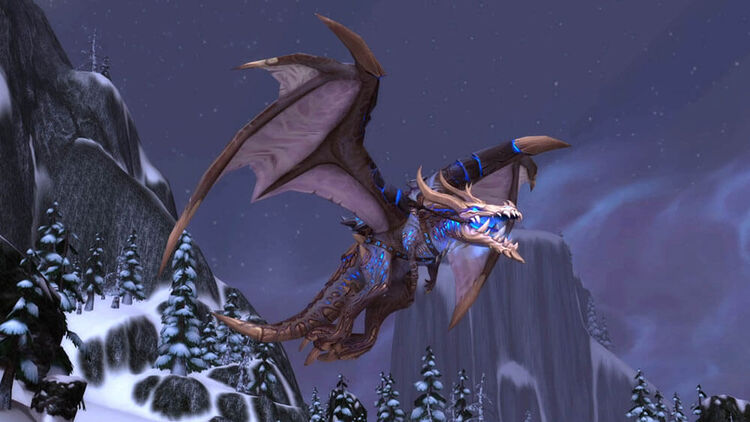 Back from the Beyond Achievement - Veilstrider Title 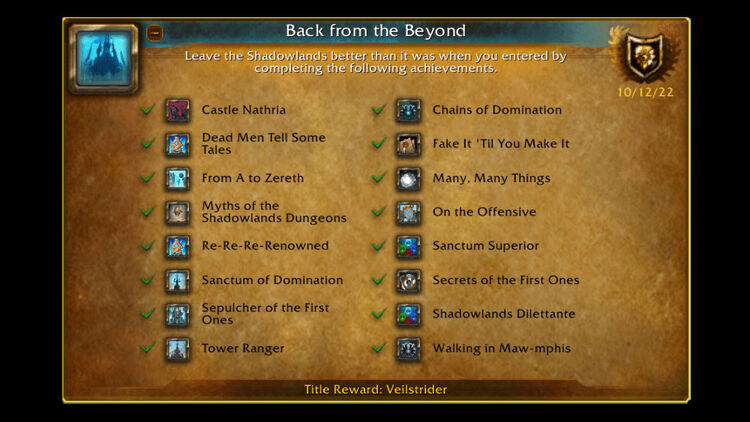 Back from the Beyond is a time-consuming meta-achievement introduced in patch 9.2.5 and rewards the player with the "Veilstrider" title. Sadly, it’s going away with the launch of Dragonflight.

We Are All Made of Stars Achievement 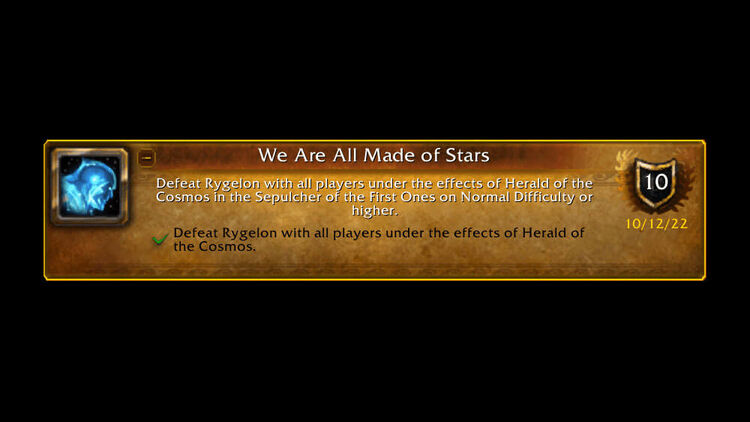 The We Are All Made of Stars achievement is also being removed. To earn it, you must defeat Rygelon without anyone dying in Sepulcher of the First Ones while everyone in the group is under the effect of the Herald of the Cosmos debuff.

To get the debuff your raid group must spread out onto the blue hexagon floor panels and pull the boss. Make sure everyone has the debuff before moving around.Once the entire group is under the effect of Herald of the Cosmos the boss will gain 3 additional abilities that you have to watch out for.

IMPORTANT NOTE: You must defeat Rygelon with the Herald of the Cosmos debuff without anyone dying! However, you can restart the boss if someone ends up dying during the encounter.

Activate Herald of the Cosmos Debuff:

These are the blue hexagons that your raid group needs to stand on to activate the Herald of the Cosmos Debuff. 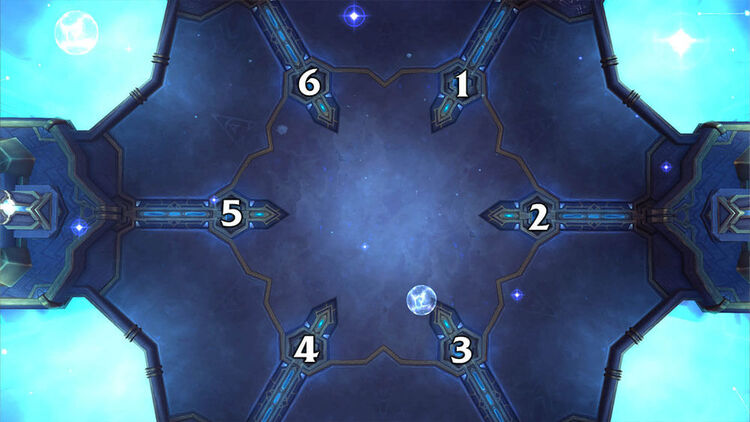 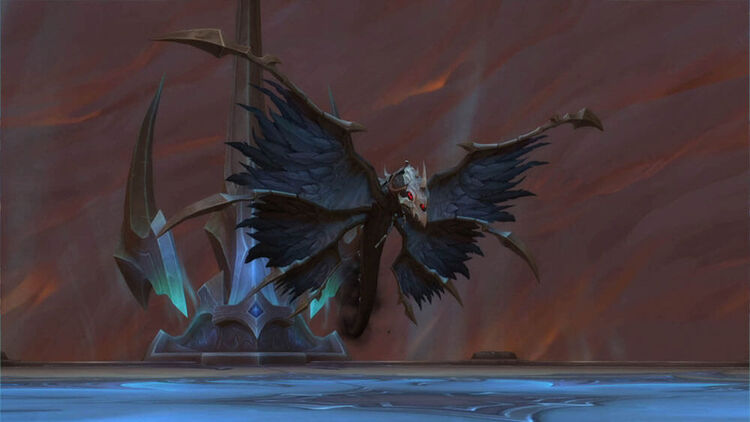 Vengeance’s Reins drops from Sylvanas Windrunner in Sanctum of Domination on Mythic difficulty. Currently, the mount has a 100% drop chance with two guaranteed mounts every time you defeat her. However, when Dragonflight releases, she will only drop one mount per kill, and the drop rate percentage will be reduced to approximately 1%, making this mount much harder to obtain. 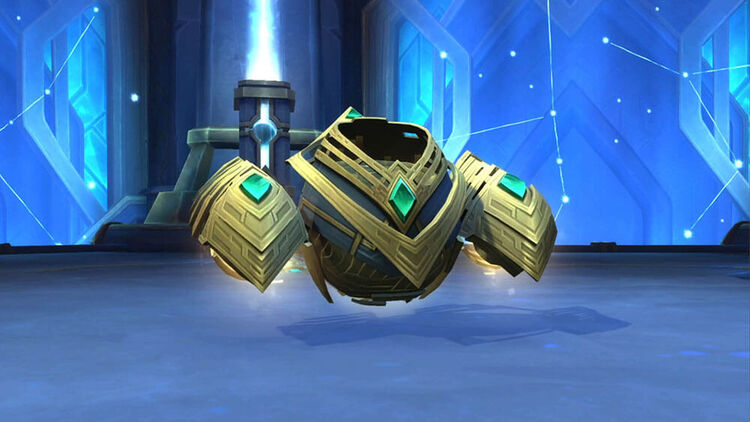 Fractal Cypher of the Zereth Overseer drops from The Jailer in Sepulcher of the First Ones on Mythic difficulty. Like the Mythic Sylvanas Mount, The Jailer drops 2 Overseer mounts per kill. However, when Dragonflight releases, he will only drop 1, and the drop chance will be reduced to approximately 1%, making it much harder to obtain.