The advent of Mythic raiding seems to have revitalized the competitive scene quite a bit, and now we even have some guilds rising from the dead! After Paragon's rejoining of the race, as well as quite a few other 10 man guilds stepping up to the main event, this time it's the most well known US guild, around since Vanilla and only recently disbanded dropping back into the World First race. So let's see what they have to say on just how this came about and how surprisingly little the Mythic announcement actually had to do with it!

What was the initial thought going into reforming the guild? Obviously the Mythic announcement played a big part, but it's only 5 less players than now, what was the real trigger?

Grafarion: I believe the spark behind reforming the guild had nothing to do with WoW or the changes to raiding (although they certainly do not hurt). Many of the former members met up at Blizzcon and in the process felt like having a chance to play again under different circumstances would be fun. The excitement from the event (new expansion announcement) and recollection of memories past inspired the rebirth of the guild. Before you knew it many former members were contacted and things were set in motion.

Kevin: We thought of the idea at Blizzcon and initiated the idea a little after the event. We thought it might be fun to try out the new expansion.

Nykez: The thought going into reforming the guild is to be more casual by cutting out alt raiding. I don’t think the Mythic announcement was really a trigger for us to reform. The only thing Mythic raids allow us to do is have less of a skill disparity from top to bottom. Prior to our breakup there were definitely players in the raid making more mistakes than most and “getting carried”.

Who started the idea off, who initiated the reforming?

Kevin: Adam, Rammy, and I thought of the idea.

Nykez: The idea started between Rammy, Adam, and Kevin. They were all officers of the guild at some point. 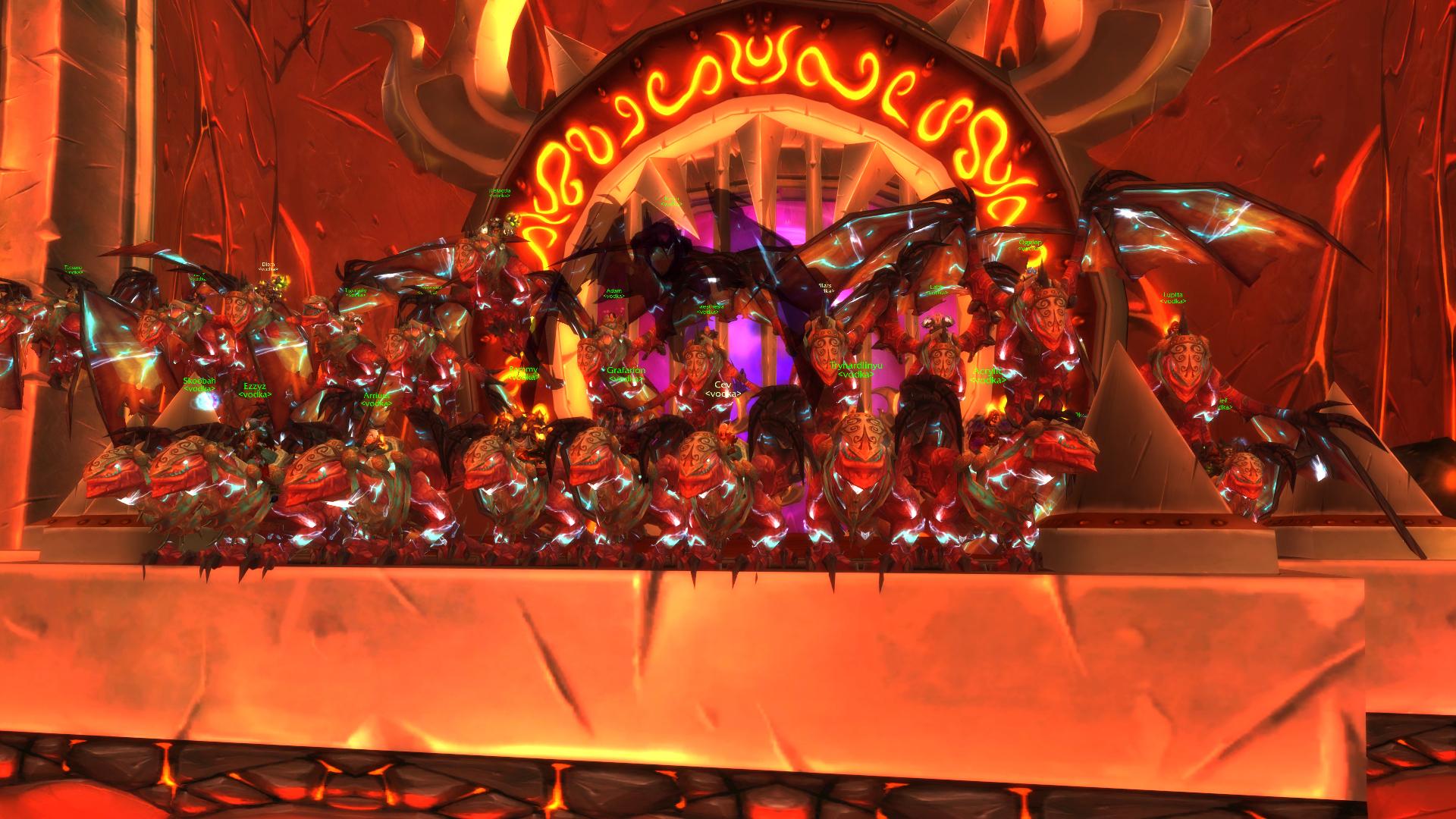 Vodka is a very venerable guild, going back to Vanilla - why did it break up relatively easily and why do you think it will hold up this time?

Grafarion: I do not think the guild really broke up so much as it decided to merge with Exodus in order to remain competitive in the world race (that was the guild's number one priority at the time). Obviously vodka had its issues and guild mergers are never easy, but I think that the guild has different goals and expectations this time around so it should hold up without issue.

Kevin: I had already quit the game during Dragon Soul in Cataclysm so I don't really know what caused the guild to break up. I think the guild will hold up this time because we will be raiding a lot less than we previously were, and the overall atmosphere will be a lot more casual.

Nykez: I think it broke up so easily last time because of the pressure to play alts, and even multiple alts. It caused burnout for a lot of players, including myself, and with the recruiting pool basically empty it was hard to replace all the people with new quality players.

Is Grafarion back and what exactly happened with him last time?

Grafarion: I am back and nothing really happened to me. I ended up quitting wow for a period of time simply because the situation I was in made playing an un-pleasurable experience. I also did not like what vodka as a guild had evolved into in order to remain competitive, and rather than make sweeping changes I chose to step away instead. I really felt like the guild strayed away from its core values and what was important to me.The way in which I left was not the best but I knew if I tried to quit any other way I likely would not have.

Kevin: Grafarion is back. #The Return

What's the guild structure like at the moment, who's in leadership positions, who's the planned core of players and how many players do you have at the moment?

Kevin: The guild structure is the same as it was before. We have a handful of officers that are used to being in the position and will help run the guild. The core of the guild will consist of familiar faces. People that were following our guild before might recognize a few of the members.

Nykez: There is not too much structure at the moment. We are just bringing back, and bringing in, as many quality players as we can and we will go over the specifics later as a group.


Which guilds did the players mostly come from?

Grafarion: The majority of the current guild is former members from vodka as well as friends.

Kevin: A good amount came out of retirement. The newer members came from various US guilds.

Nykez: I think most people came from the retirement guild. 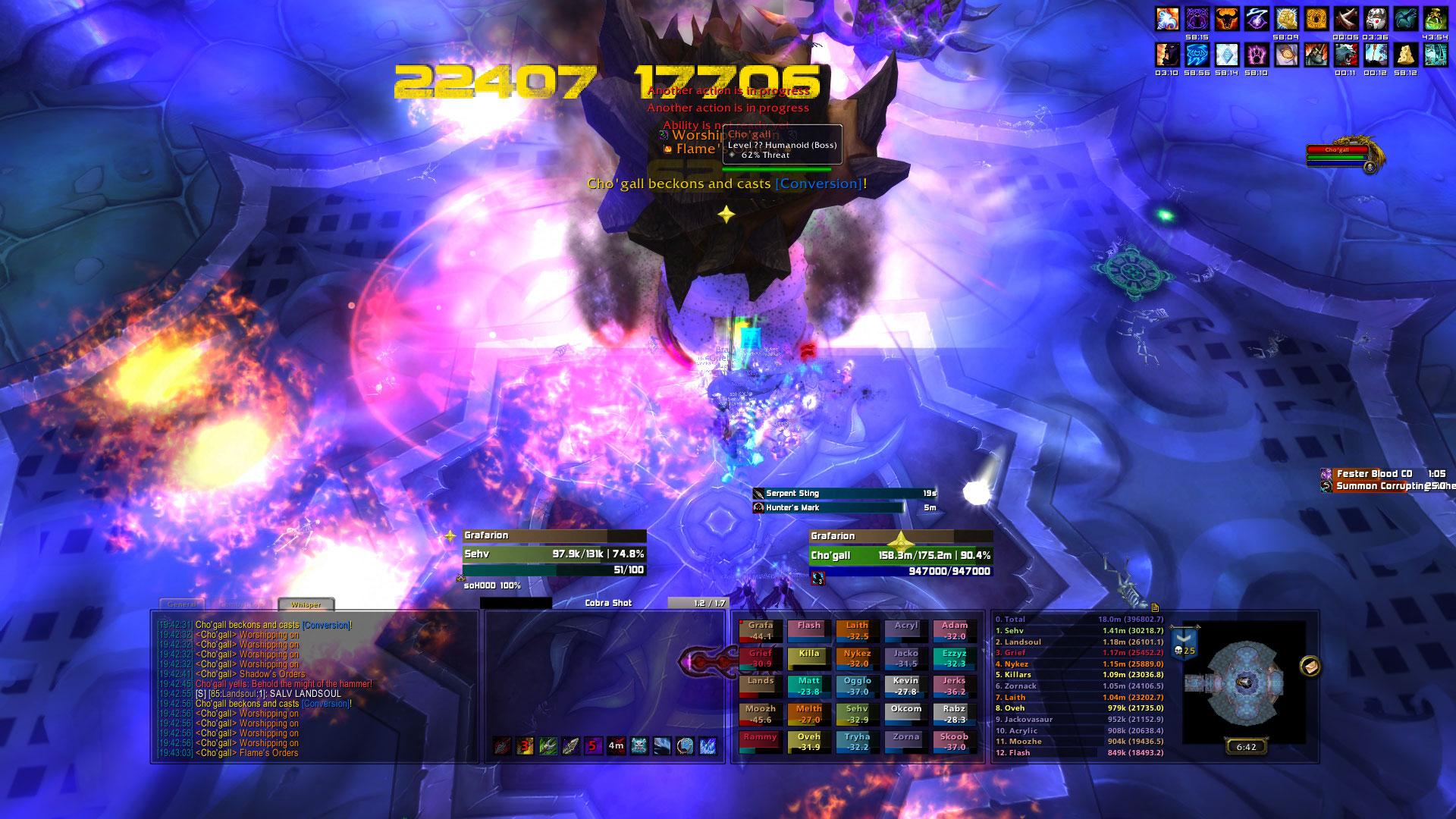 How competitive do you plan to be, are you shooting for US No.1 or perhaps even higher? Are you going to go full out, 24/7, like the very top guilds?

Grafarion: I think the goal of the guild right now is to do the best we can based around the schedule we have put in place. We won’t be raiding 24/7 like the very top guilds and the guild goals/expectations are not centered around rankings or achieving world first kills.

Kevin: This time around, our guild will be more casual. We will be raiding 4 days a week. We will still be competing against the world's best guilds but at our new pace. Over the breakup and the past few years we realized that we all wanted to enjoy the game together and have fun.

Nykez: We plan to raid hard but we are not going to go all out 24/7 with 3 alts like the top guilds. Our rank may suffer in the process but it’s something we are willing to accept.

The competition is going to be much more intense come WoD with 10 man guilds coming up to Mythic and the top 25 ones trimming down to the very best of the best. How important is a good placement in the first tiers going to be for you? If you don't perform well at the start, for example, will that be it for this iteration of vodka or are you just going to enjoy raiding regardless?

Grafarion: As I said before rankings are not our focus at the moment but I think it would be nice to be respectable. I also know how unrealistic it would be for us to form a guild and attempt to complete for world first right away. We want to become a good guild again regardless of that taking time and a lot of hard work. Knowing that should allow us to enjoy playing the game regardless of what the outcome is early on.

Kevin: We'll perform our best. Can't really say much else this early. I will say we will enjoy raiding regardless of how we perform.

Nykez: We are hoping that having a high skill requirement for each position will allow us to perform well and compete for top positions without the alt raiding. However, if we don’t perform well then we are just going to enjoy raiding. The reason we wanted to remake the guild was because we all had so much fun playing together. The problem we had previously was that it became too much of a job with alt raiding and was no longer fun.

How many members do you think you'll need to be competitive?

Grafarion: Vodka has always been a smaller group and we will likely remain that way.

Kevin: Our roster at the moment is pretty small which is what we usually like to have, there might be a chance we will increase it later on.

Nykez: Somewhere around 25 I imagine. You don’t want too many people to sit since we expect to have quality players in each position, but sometimes classes are better, and sometimes people have other commitments.

Are you going to try for a 25 man roster now to get some experience raiding together again or will you just be waiting for the beta or doing 10 man?

Grafarion: Right now we are raiding whatever we can each week and progressing as best we can with what we have on a limited raid schedule, but it is a lot more unstructured currently; especially with some members not returning till closer to WoD.

Kevin: We have been trying to raid a few times a week. We aren't doing much at the moment besides a couple raids a week.

Nykez: Yes, we are starting to get people back to build cohesion with some of the new people we have and to get some leveling gear. 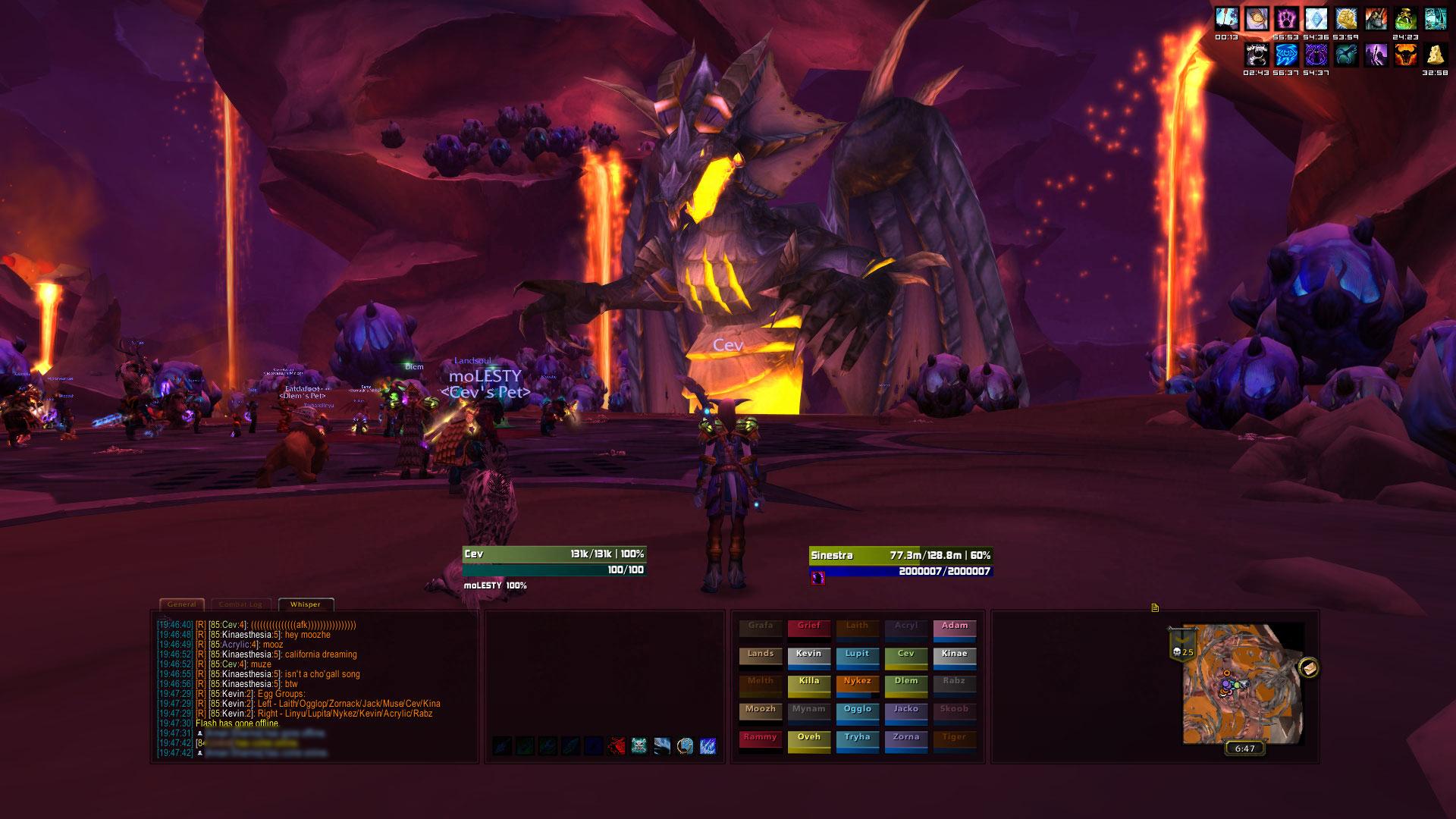 What were the first reactions of some of the people that were approached about the reforming?

Grafarion: Vodka has always been a special and unique guild and I think many were excited because the guild fit them well in the past.

Kevin: We spoke to a few people about it to get a head count to see who might be interested. Somehow the idea spread like wildfire and just about everyone who was friends with someone in vodka knew about it. The day after we accumulated an almost complete roster.

Nykez: I think some people were surprised to hear about certain people coming back that seemed like long shots. Overall though most people were very open to the idea since we really had a great team in the old vodka, and had a lot of fun raiding together.  Having the opportunity to enjoy the game again is something most people are open to.

What are your thoughts on Mythic in general, was it a good move by Blizzard?

Grafarion: I think Mythic raiding is a good move by  Blizzard simply because it allows them more freedom and flexibility in designing, developing, and polishing high quality end game content for players. Hopefully this results in more/faster produced raid content that is well balanced and bug free. While it may seem like a shock to guilds and the raiding community, having to deal with restructuring etc, this greatly increases the pool of players at the very top of raiding, making the competition better, the opportunities greater for up and coming players as well as making recruitment easier for guilds. With one raid size the playing field will be even and the standings clear cut.

Kevin: By having one difficulty they are free to add more elements to a fight that they previously weren't able to.

Nykez: I feel like it was an awful idea honestly. I feel really bad for the 10 man groups that are going to have to find a whole bunch of people or other guilds to merge with because massive influxes of new members or merges can often times go south. It was very lazy on Blizzard’s part in my opinion and was solely done to make it easier for them to balance things with there being only one size to manage.

Anything else, in closing?

Grafarion: Nothing other than sorry to all the fans that really loved vodka. Hopefully we can bring it back to its roots that the community fell in love with over the years moving forward.