The Warm Up: Throne of Thunder Heroic Race Recap

The final tier of Mists of Pandaria is now upon us and there are less than 3 days until the Heroic progress race starts. The last raid of an expansion has historically been one of change at the top. Chaotic is a mild way to describe the last four end-of-expansion/game bosses and the competition to get them down first. Even Vanilla wasn't immune to this insanity as for most of it the US guilds, and specifically Death and Taxes, were on top. Nihilum's C'thun kill came out of nowhere and under very special circumstances (the hotfix at a weird time), so it didn't really change the flow of Vanilla as Death and Taxes were immediately back on top in Naxxramas, up until the very end.

So, starting with Vanilla:

No guild that dominated an entire expansion has so far managed to retain their crown at the very end. This tier might be the one to change that, as Method are still going full steam ahead, but there's a reason these things happen at the end and we might get yet another upset - making this tier one of the most exciting in a long, long time.

And that's saying something, since Throne of Thunder was an amazing tier as well as an incredibly interesting race. So, in preparation for this tier's potentially cataclysmic battle, let's take a look at the trials and tribulations facing last tier's competitors and the changes that they went through as <Storm's End> was up for grabs.

Firstly, in a somewhat surprising turn of events, vodka's guild leader Graf “steps down” from his role as leader of one of the highest-ranked United States guilds. As a result of this, much of vodka merged with , another top-ranking US guild. Killars, vodka's world famous troll rogue troll, became one of the officers of this new arrangement. The new guild promised to perform extremely well and went in to Throne with a measure of confidence that was perhaps a little overbearing and wishful.

Low blow, but Exodus is famous for exploiting Yogg Zero, then exclaiming it was "impossible" when caught -
only to have Stars kill it a legit a few days later.

With one of the top United States guilds now dead, its best players merging into Exodus, the pressure was on Blood Legion (ranked US #1 for the previous tier) to clean up and emerge as Overall World First. In addition to this, several other US guilds prepared to volley for ranking in Throne, including

On the Eastern side of the Northern Atlantic, Method was primed and ready to assert their place at the forefront of raids after the tragic end of

In the 10 man race it was fairly obvious Paragon were going to clear house, so the excitement was somewhat to absolutely smaller than for the big 25 man race.

Notes from the field: Tier 15

The tier turned out to be an interesting mix-fest of bottlenecks and piñatas, bosses like Tortos and Jin’rokh fell quickly and easily, but others like Ji-Kun, Durumu and even Dark Animus proved a difficult challenge for the competitors. Notably, Method managed to catch the United States guilds at Ji-Kun, despite the later start for Europeans that is now "tradition" in each new raid tier. With a bit of a hang up on Durumu due to the AoE requirements, and some finagling and tomfoolery with Primordius, the rest of the tier proceeded rather smoothly. It was not until the encounter with the Twins that either guild ran into some notable problems. Staying up deep into the night, as is par the course for the World First race, Method came very close to a kill on the two concubines. After calling it a night however, Blood Legion secured a kill ahead of them the next morning.

A hotfix was implemented after the reset of the raid (in order to bring 25 man difficulty in line with 10 man), and due to the US raids being open 24 hours previous to European ones, Blood Legion was able to secure the kill on a nerfed and corrected version of the encounter. Method obviously did not like this and secured a kill as soon as their realm came back online post-hotfix. As it always has been, the issue of US guilds having a 24 hour (or more, in some cases) head start had come to the forefront. Those 24 hours, despite seeming small in the scale of the overall tier for most raiders, makes a significant difference for bleeding edge progression. Case in point, that extra time amounts to extra attempts and extra strategy development, which can amount to a significant advantage. However, with Twins falling easily after the overnight hotfix came the REAL race: Lei Shen.

During all this Paragon had managed to miss out on exactly two World First kills, specifically on the first two bosses, as they also had the 1-day disadvantage for being a EU guild - spoiler alert - those were the only two bosses they didn't get a World First on in the entire tier.

While the remaining guilds were finishing the encounters already beaten by Method and Blood Legion, Lei Shen proved a serious challenge to both top guilds. Over a long period, with the eventual gear progression of both raids and the tactical innovation of both groups thriving, the boss remained alive. You can always tell a good raid tier by how long the Final Boss refuses to die, and Lei Shen was stubborn. In the words of Method's tank, Sco:

“Perfectly tuned. Lei Shen required strong strategizing, coordination, maximization and great individual AND team play. The boss was killable in his earliest form with the then current gear levels – but only just! We worked on the boss for a full reset, gradually improving each day before getting the kill. I think that Lei Shen is probably the best tuned end boss that Blizzard has created as of yet.  A lot of the other bosses in the past have been more along the lines of ‘come back when you have more gear’.”

Nearing the end of the raid week, Method finally secured a kill. Several days of progress and strategizing finally came to fruition. Lei Shen had remained alive for around 15 days and has universally been praised as one of the best, if not THE best boss in World of Warcraft raiding so far.

The tier, effectively, was over, Ra-den being a mere trifle in comparison to the extremely tight technical and skill requirements to defeat The Thunder King. Finishing in second, right on the heels of Method, was Blood Legion. Third were those lovable Russians in Exorsus, who used a strategy that was, in the words of Roger Brown of Method, “more 'brute forcy' than the other two. The word that I kept having in my head while watching their tactic was 'YOLO'! I couldn't see their raid frames/grid, but I think they probably had a lot of close calls with that tactic.”

Obviously, Paragon cleaned up in 10 man with 11/13 World Firsts. Sanitas and Hordlinge closed out the top 3 and there's a healthy competition there for the No.2 spot or, as we like to call it, No.1-not-counting-Paragon.

As far as the lofty boasts prior, Exodus unfortunately met its demise at the end of tier 15 after a fairly disappointing performance, coming in behind the 4-nights a week guild Midwinter in 5th place. A far cry from the anticipation and expectations from their merger with vodka. For whatever reason, whether from in-guild friction, personal dissatisfaction, or even skill problems, Exodus disbanded. Killars, resident longtime vodka player and rogue, said on Facebook:

“Yes, I'll confirm the news here for anyone not in the loop or questioning the rumors.

Despite this final tragic end to a storied American guild (vodka has been around for a very long time, and was in fact the cast of the notable YouTube boss guides Learn2Raid), the tier overall could be considered a success from a competitive standpoint, and a notable example of a tier of perfect length for the World First Race. No gating. No limited attempts (with the exception of Ra-Den of course), and no bosses guarded by item level requirements. The fact that Lei Shen was beaten with only two week's worth of heroic gear is not only a testament to the skill level at which top guilds routinely operate at, but a significant achievement on the part of Blizzard. Making a boss that is just beatable by the slimmest of margins is a difficult endeavor, and this time the boys in Anaheim succeeded. 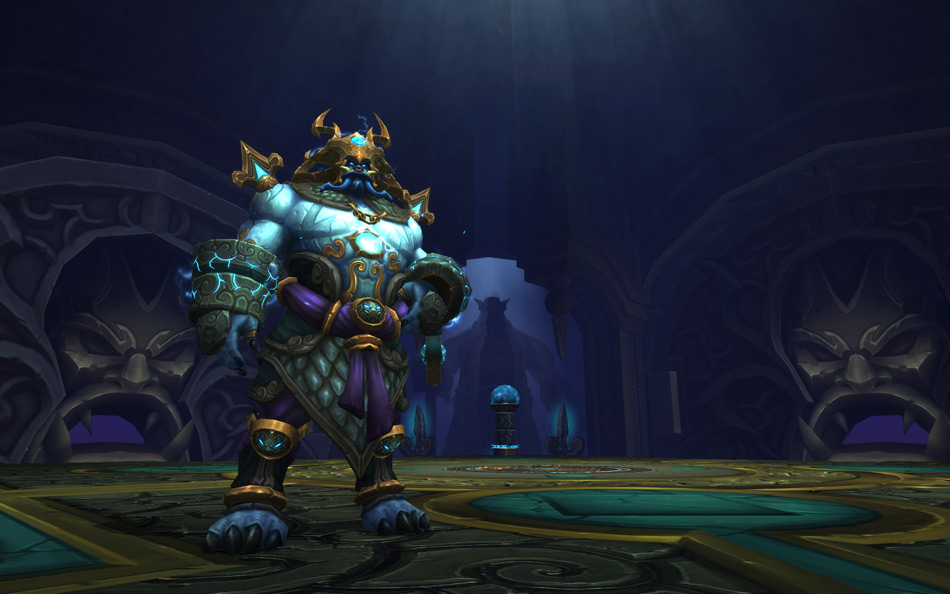 That being said, it is also noteworthy to see the somewhat dwindling hardcore raiding scene. Especially with the demise of vodka, who had several World First kills in the previous tier, it is more important than ever to realize the skill and dedication required to raid at the absolute edge of progression. The guilds remaining and competing for World Firsts put in serious amounts of time and energy towards achieving those kills. To compete for, and win, a World First boss kill in WoW is just as notable, from a competitive e-sports perspective, as winning the International or a Dreamhack tournament. The World First race is the PvE game's playoffs, the most intense part of the year, and the most exciting. The health of this race is perhaps a good thermometer for the health of the game as whole. When people see talented and dedicated players performing at an outstanding level, it makes the experience of playing wow more fun, more immersive, and more serious.

Siege of Orgrimmar's World First race is a measuring rod for the health of the PvE game as a whole, and if we learned anything from the last tier, great raids make for a great race.

If you want to read more about the previous tier to get you all warmed up and knowledgeable for Siege, check these articles out:

Throne of Thunder Heroic Progress - The full course of the tier 15 race, with dates, times, tables for each boss as well as videos and WF killshots.
The Throne is Method's: A Post T15 25 man Victory Interview - Method share their thoughts on the tier.
DREAM Paragon: The Undefeatable 10 - An interview with Paragon after the race was over.
The Raiding Pinnacle: Exorsus - An extensive interview about the No.3 25 man guild.
Top 10 with a 6 Hour Raid Day: A ScrubBusters Profile - The No.8 25 man guild speaks about their less-than-hardcore raiding schedule and how they still managed to finish in the top 10 with it.
Exodus Is No More - The sad announcement of the guild breaking apart. 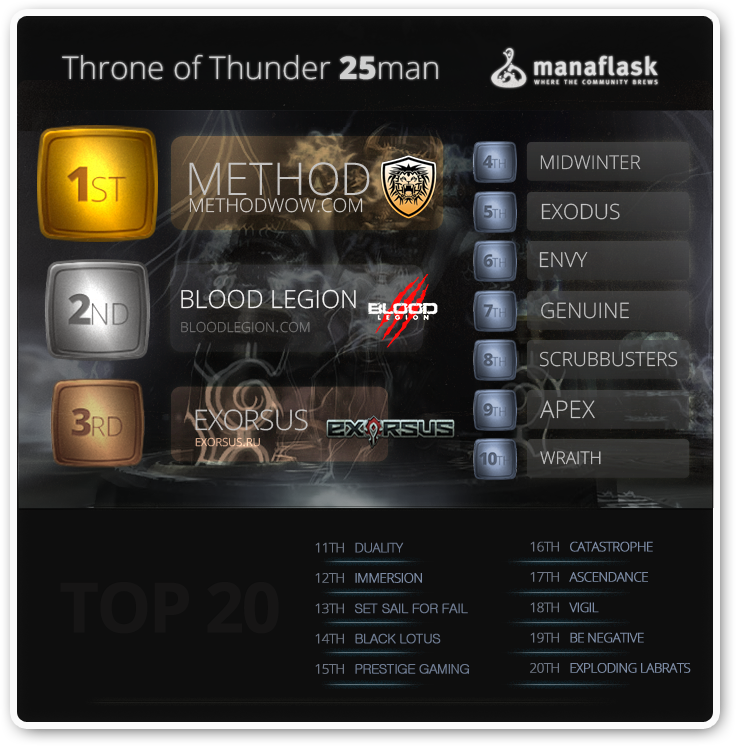 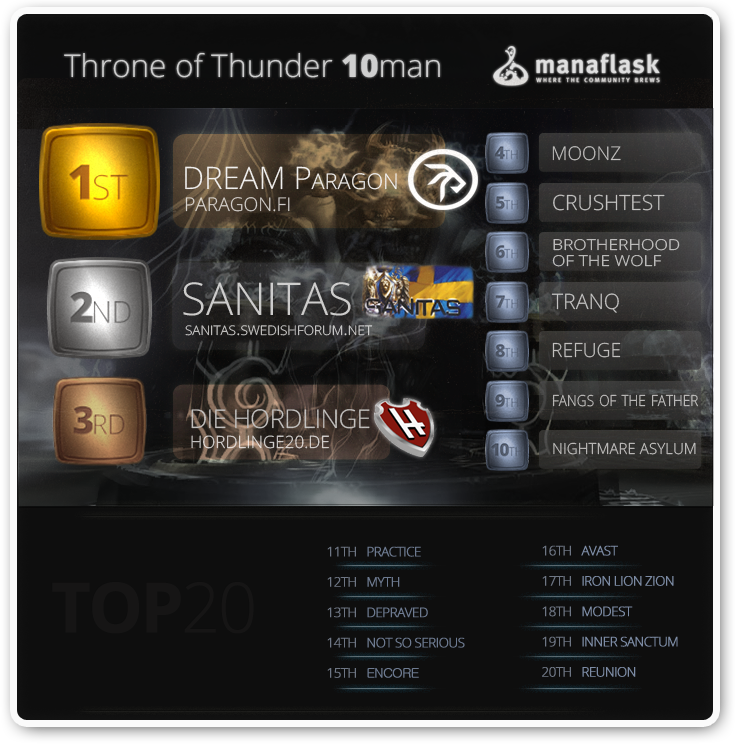