Welcome back to another entry. In the first episode I started talking about our progression through Siege of Orgrimmar, pre-patch preparation and then the PTR. This week we will be going in to the normalmode week which most of you know involves the fun of... SPLITRAIDS! For the people who are not familiar with what splitraiding is, I'll explain.

It all started back around ICC when Paragon became dominant. They basically introduced us to what we know as "hardcore raiding" today, and it involved having a lot of alternative characters so that you could run multiple raids during the normalmodes to get more gear to your main characters that were going to be used during heroic progression. Let's say you have enough characters to run 3 normalmode raids, then you evenly split up main characters into the 5 different raids. You make sure that every set token (Conqueror/Vanquisher/Protector) is covered by at least 1 main in each raid and the same also goes for weapons, trinkets... well pretty much every piece of loot that potentially could drop. After that you fill up the raids with alternative characters, so you funnel all the drops into your mains so that you are as prepared as possible for the week after when heroic mode opens up.

Sadly I lost the old documents that we used to have for all the characters for SoO, but I did however find an old document where the healers were split for Throne of Thunder.

So for group 1 you got Strydem/Faerko looting healing items such as trinkets, group 2 Aladya, Group 3 me(Sonie) and Isheria, group 4 Apku and group 5 Nagura. And I think Owld was in group 4 as well (he came back shortly after this document was made).

So with that covered, let's get back to SoO. SoO was a bit special since the first boss was Immerseus which was extremely easy and had what many people consider to be the most important item in the whole instance: Purified Binding of Immerseus. We started out on Wednesday evening with 8x 25m raids on Immerseus with all our casters split up so that they could potentially get the trinket which was a huge upgrade. Things didn't go as well as we thought they would though, the loot god wasn't with us and I believe we only got 1-2 trinkets max which was really demotivating, as our competitors got more than that. The rest of the night we just chilled which gave people who didn't do the legendary cloak quest before a chance to finally do it. During the normalmode week we never take days off work/school, so we only play during the evenings. 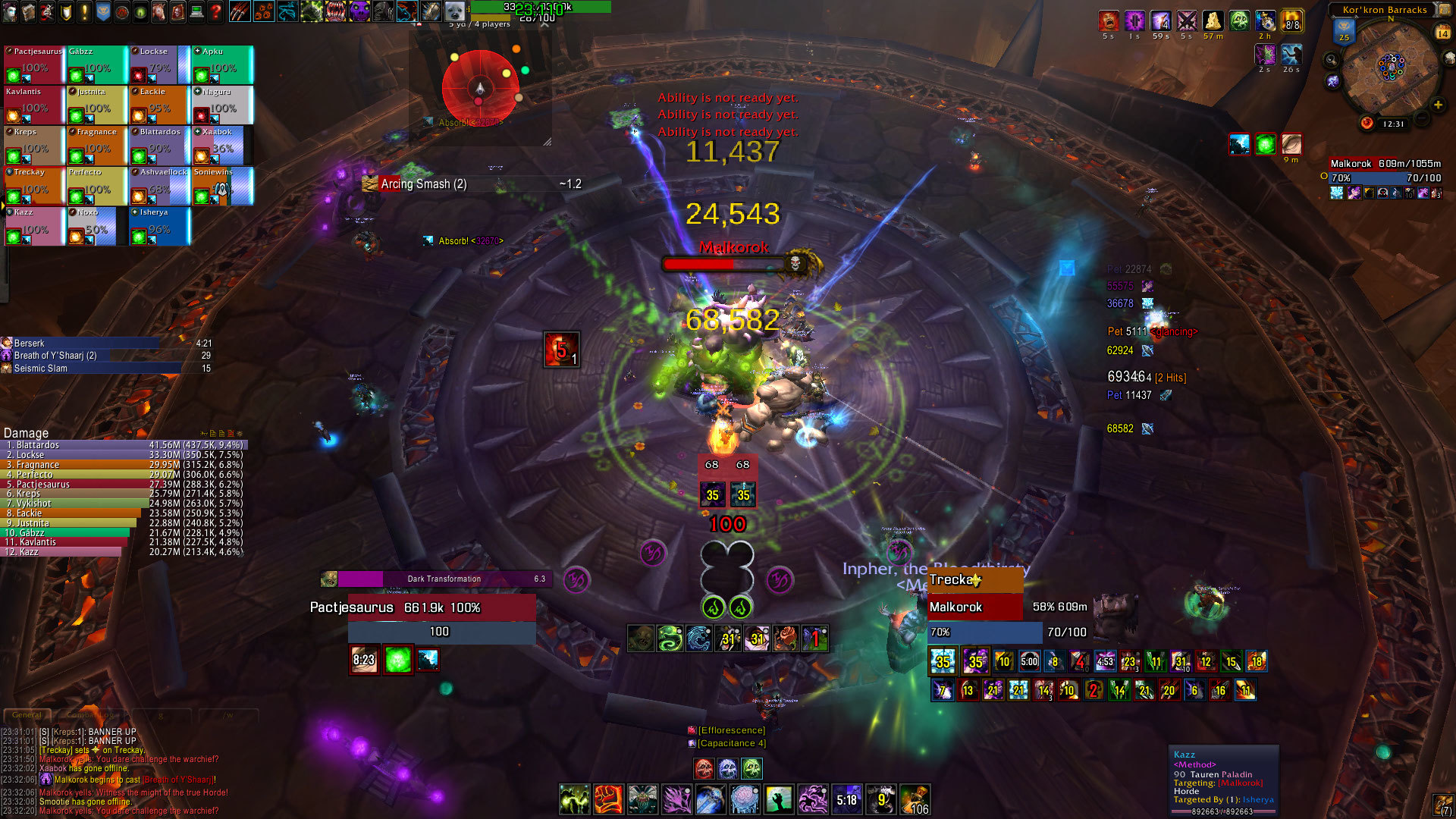 For Thursday we went back to 5x 25m raids for all other bosses and, as you can see, these raids weren't exactly the "Method top standard" raids that you usually get. But we just needed the mains in each group to step up and carry the rest of the raid.

Saturday we arrived at Paragons of the Klaxxi in all of the raids and that's where we first ran into some issues. Paragons was a really complex fight with many abilities and a lot of things that could go wrong. But the main issue was the enrage timer when you had so many alts in the raid. I do believe we had to re-balance the raids a bit at this point to even-out the dps/healing. And we decided to start with the raid that we thought had the worst dps. You do this because if the raid with the worst dps can kill it, then all the other raids after should not run into any issues, and if you do it the other way around and the raid with the best dps kills it first, then you run into the risk of not being able to kill it later in the other raids and then it's too late to make any adjustments. After a few hours of trying out mechanics and speculating about the heroic ones (we didn't get very far on the heroic testing) we killed the boss in the first raid and moved on to the other raids and finished the boss without too much hassle.

All of Sunday was assigned to practice on Garrosh, the final boss. We spent the whole day practicing different approaches to the fight, testing which classes were best for doing X task but, most importantly, positioning. We came up with a strategy that we believed was really solid and would be the one used to claim our first kill in the heroic version. Let's just say... we were so wrong. 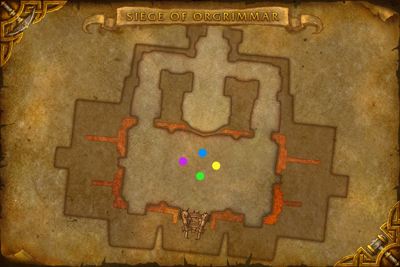 The picture above is what we had planned for phase 2 at first and dealing with the weapons. The raid was supposed to be stacked at blue with the boss there as well, and then you had 7 people out for the desecrated weapon at yellow. When the boss started casting Whirlwind the tanks dragged the boss away to diamond and after that back to the raid at blue, except if you got a weapon at same time on blue, then the whole raid moved to green. We realized later that this wouldn't work since you had to kill the weapons too quickly for it to be viable and then it's not very dps efficient since you just want them up for the people who actually gain damage on Garrosh by dotting them. And then you basically couldn't keep up with them.

Another issue with the strategy was when you had Empowered Whirlwind and adds spawned, they would have all been very stacked. Which was fine on normalmode since we actually used the kiting strat there, but on heroic we decided not to and then we had to swap the strategy as well, but more on that in a later episode!

At like 22:00 we were satisfied with the time we spent practicing and we decided to start killing the boss in our 5 raids. We made some adjustments to the dps setups and proceeded with the same approach as we had on Paragons to start with the lowest dps raid. The boss died quite quick in the 1st raid we did, and that's when we noticed that he only dropped 1 Token, when he was supposed to drop 3. We started asking around and told Blizzard about it. We made the call to to postpone the other 4 raids until Tuesday in case it was a bug and would get fixed. Starym actually posted an article about it before which you can read here if you aren't familiar with what actually happened.

Usually we got Tuesdays off before the heroic week starts, but this time around we decided to have Monday off instead. On Tuesday we came back and found out that the issue had been resolved and we went ahead and finished Garrosh in the 4 other raids. Garrosh's loot table was definitely interesting, not only did he have the FFA set tokens, he also carried BoA weapons and was the first boss ever to do so.

This meant that splitraids were even more important than before, not only did you get more items per main, you also had a bonus chance to get a Binds on Account weapon which you could just mail over to your main character incase you were lucky and got it on an alt. We were actually quite lucky with BoA weapons, which was only fair in my opinion since we had horrible luck with the Immerseus trinkets.

After that it was important for everyone to go to bed and rest up. Because the morning after... Judgement day... the day that we'd been waiting and preparing for the last half year.