As promised, the final entry in the Ahn'Qiraj part of Vanilla is here significantly faster!

Funny enough I actually found this boss was quite cool, it’s a massive worm that burrows under the ground for a great deal of the fight. But during its uptime it does a 120 degree cone attack on a random player so the tactics are simple - make 4 groups that are spread around him so only 1 group gets hit at a time. Then you stand at max range and dps the boss. To avoid even more damage you use healers to stand further out behind these groups so they don’t get hit by the cone, because if you do, you get “stunned” for a short amount of time. And if you have healers out-ranging that then they can heal you up when it happens. 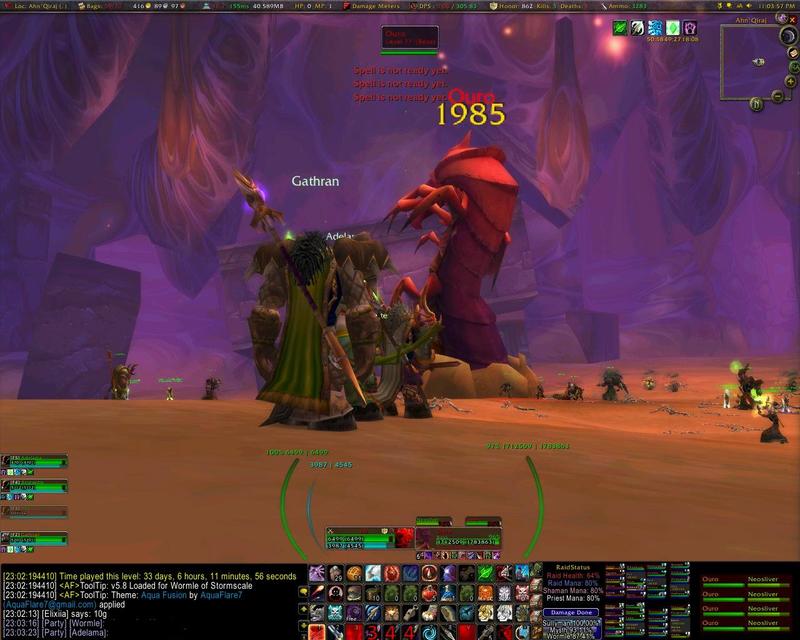 During the burrow Phase you run around for a little while to avoid the burrowed ground that is coming after you and when the timer is about to run out for his submerge you all stack in the center and aoe the hatchlings that spawn. The boss did hit pretty hard though, so you need geared tanks. And at 20 % he stops submerging and just goes into full hard hitting mode. The boss is pretty simple and I don’t know anyone who had problems killing it, so it’s a good reward boss before C’thun which on the other hand wasn’t so easy.

This boss… Was hard. 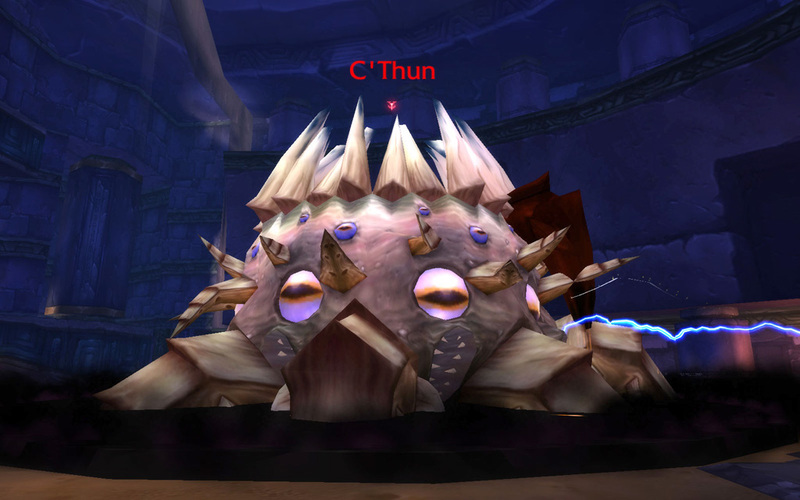 To be honest when I look back at it now it’s not actually that hard but I would still bet that if you placed C’thun in a LFR raid today it would still wipe the group a bit (Durumu style). The boss had so many variables, that is hard to list them all up without writing a book about it. The first and foremost thing to say about him is that it was 100% unkillable in the first stages. However, I never tried these stages and Curse was stumbling a bit in AQ40 and were a few weeks behind Nihilum who got the World First on this.  But from what I was told it was unkillable, stuff just had too many hit points and did too much damage compared to what you could handle. Blizzard did allow guilds like Nihilum and others to smack their faces against the boss for a little while before they decided to nerf it.

The boss is considered by many to be the hardest boss created in wow since exactly 0 guilds killed it in its original “intended” design. At this time in World of Warcraft the American guilds were all over the world first kills and especially a guild called Death and Taxes, who were considered the “Paragon” of Vanilla - taking almost any first kill worth noting. And they were not short of it this time either. DnT, together with other top guilds like Nihilum were banging their heads on this encounter for days, maybe even weeks, can’t remember exactly how long it went on. The guilds knew exactly what was going on and how to kill it, but the numbers just didn’t add up. Blizzard gave the guilds time to see if anyone could overcome the numbers or find any other tactics. Both American and European guilds did leak that the boss wasn’t possible to kill in its current state, everyone pretty much knew that as a fact.

And Blizzard did as well. So they had a major dilemma, since US and EU don’t raid at the same time, they had to give 1 of the continents the nerf patch first. So the day came in 2006 where Blizzard decided it was the Europeans turn to get a World First kill. They hotfixed the boss at around 3-4 AM US time (9-10 CET) so no one noticed before they had to get up and get to work. Gathering a 40 man raid wasn’t easy back then like Method and other guilds can raid all day these days. But Blizzard  allowed European raiders to raid a heavily nerfed C’thun somewhat before the US, it only took Nihilum, who were the leading European guild, a few hours after the nerf to get the kill done. 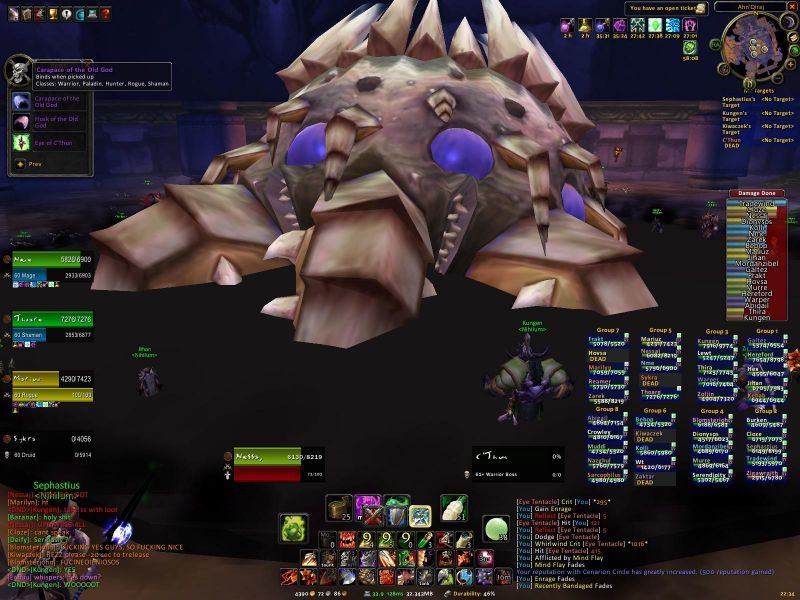 Stole this picture from Nessaj on the interweb :p Nihilum World first.

As you could imagine, the leading US guilds and their US fan bois were furious. There were like thousands of post on the official forum and even more or less just went around the internet hating on Blizzard and trashing Nihilum for getting this World First kill over the US guilds like DnT, Elitist jerks ect. Many guilds were really disappointed by the way it went down and probably most angry at Blizzard for making a blocked boss like this. But if we look back at it, no matter what choice Blizzard made regarding the encounter, the guilds would've been displeased with.

Leave it and no one would kill it. All the top guilds were already moaning about how Blizzard made a boss that couldn’t be killed and shared their disappointments on the World of Warcraft forums.
Nerf before raidtime for US? Then EU guilds would have been mad. So it was a losing situation no matter what.
Also during these hours there was the usual “Post movie or exploited” hatred, but only a couple of hours after the US found out that the boss was nerfed they had a kill. And the exploit questions stopped.

One of the best rumors was that Kungen (Tank and GM of Nihilum) used a Disgusting Oozeling to stack up debuff on himself so he would be able to push off the debuff you get in the stomach of C’thun in P2 - this was supposed to make him stay inside until both claws were dead without having to come out (explanation later). This is kind of wild and I’m not 100% sure about this, but I found it funny anyway so what do you think?! Maybe someone here can deny or confirm what really happened!

The main abilities were his beams and tentacles, and he had a couple of different phases.
He starts out in the “eye” phase where he is doing his beams. He had a green beam and a red beam each designed to wipe your raid if you had no idea what to do.
The green beam he used to cast on a player which would then jump to a nearby player, if any, with increased strength, and on and on, wiping your raid if you stacked up. This you found out the first time you pulled the boss because he engages as soon as you enter the room. He beams the first guy he sees! And then something like this: will happen :D

The tactic you use though, is to send 1 guy into the room (often the main tank) to soak the first beam, and then after it had hit him, the rest of the raid could enter. It’s a mechanic that requires your whole raid to be spread out. But it’s fairly simple to deal with.
The 2nd Beam is the “fearful” red beam of doom! 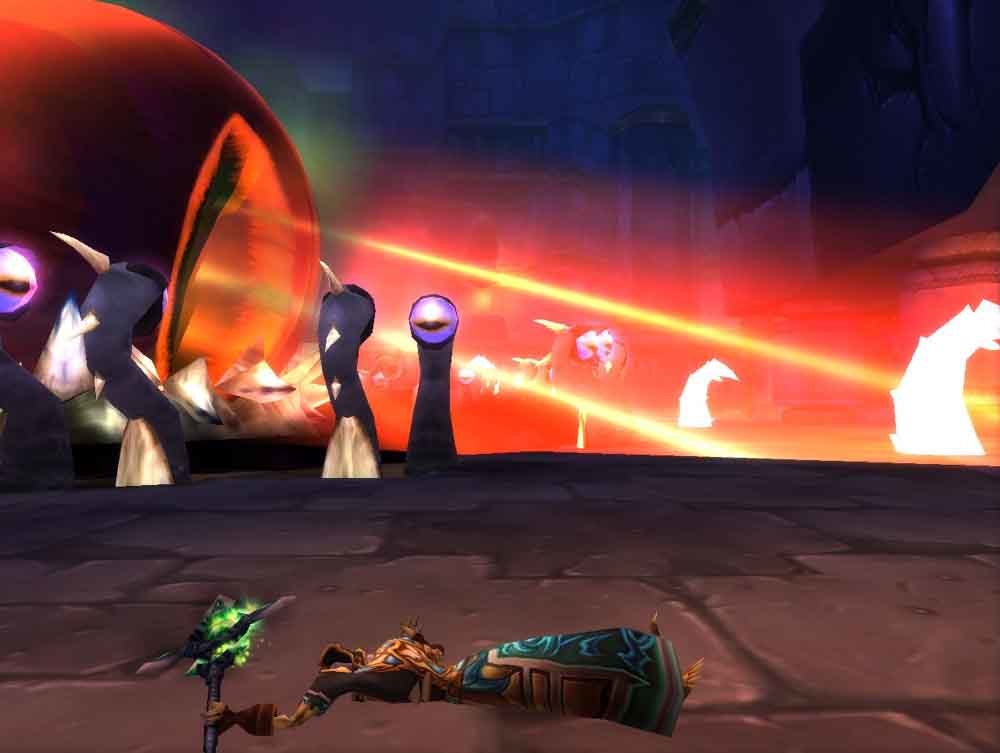 The beam targets a player in the raid and then starts a red colored beam that goes 360 degrees around the room, killing anyone it touches instantly. The beam “could” be jumped over but only people who didn’t hold their lives in high regard or didn't want their raidleader happy ever tried that. Everyone had to run a lap around the boss and get back into positions.

While these 2 mechanics are fairly simple to deal with by themselves another twist comes on the field soon.
Tentacles, lots of tentacles!
In the eye phase the boss will spawn Mind flaying Tentacles that will slow players down if hit and deal a high amount of damage. Fatal, as they often hit just before a red beam. The tactic is simple enough, spread the dps around the room and make sure each of the 8-10 spawns die within seconds (easier said than done for a lot of tries). Other than that he spawns smaller meleeing tentacles on players that should be killed whenever everything else is under control. The phase ends when you kill the eye and the real Body of C’thun comes up from the dark mist. He stops doing the beams that he had been doing in the previous phase but adds a couple of new things. First of all he takes almost no damage because he has a hardened shell that needs to be weakened from within. Pretty much from the phase start he will be spawning Huge tentacles around the room that need to be tanked and killed, they have tons of hit points though, so your dps needed to be on top of them before there were too many up! He will still be doing the mind flaying tentacles so you needed to keep your positions and kill them asap. But he will also add a new ability I like to call being “eaten”. Basically he spawns a “void zone” under you and then you get swallowed into his stomach. 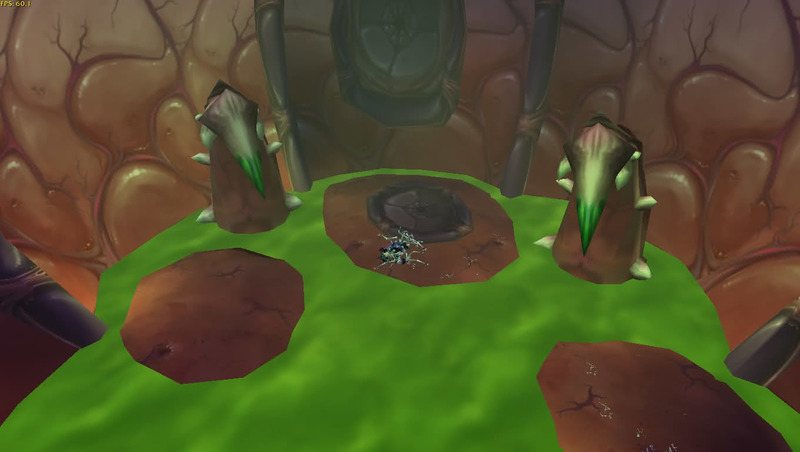 Once inside you get dumped into the acid and have to make your way to one of the platforms. Inside there were 2 large tentacles, and your job was now to kill these 2 tentacles and make your way out of the stomach by going on the platform in the middle. You couldn’t do this alone so you had to deal the damage you could and get out because there was ticking damage clock on you constantly inside. So you only had limited time before you died. Often there were up to 2-4 people inside the stomach at the same time. Once you got out it was a good idea to bandage yourself up because healers were already busy with lots of other things + healer mana. When you managed to kill both of the tentacles inside his stomach C’thun became “weakened” for a short amount of time, meaning you could deal lots of damage to him before he resumed his hardened shell. I believe you had to do this about 3 or 4 times before he was dead

On our first kill I sacrificed myself in the stomach on the least weakening phase to kill the tentacles inside the stomach in time before you had the mind flaying adds spawning (if you didn’t time this you could end up with mind flaying adds during your precious time in the weakened phase and then you couldn't properly dps the boss as you had to handle the flayers.
I remember yelling over Ventrilo, I’m killing it, I’m killing it now, get ready, get ready, Get Ready. With a little overexcited voice!

All in all I was somewhat disappointed with AQ40, i never really found any love for this instance. Not to mention the 5-6 min corpse runs you had to do to get back to C’thun when you wiped. C’thun is an epic fight, Ouro was fun, the rest of the fights won’t make my shortlist. Luckily Blizzard stepped up their game and released Naxxramas, One of the most memorable instances to date.

Minecraft King of the Hill - Episode 11