This great instance. Once the prime jewel of Endgame raiding. I still remember it as if it was yesterday. Getting my attunement as servers came up and Riding from Light's Hope Chapel towards the instance in the North...

Like any patch day in Vanilla, servers were supposed to come up at 11.00 but eventually first came up at like 18 or later due to issues, a lot of people took the day off just to be first on when the servers come up, and so there often was a lot of spare time to fool around on Ventrilo and what not. Unlike today there wasn’t anything called PTR testing of bosses for the public so people had no idea what to expect inside the instance. Therefore there was only very little information about the bosses, which was the easiest and which the hardest. Blizzard's concept was to make it so that the first bosses of each wing were “supposed” to be the easiest but most guilds just started with 1 wing, and the wing most people agreed on would be the easiest was the Spider-Wing.

I joined Curse during their stay in World of Warcraft but the guild dated all the way back to DAoC if I’m not mistaken,  back then it was a mostly French guild. And even during the start of Vanilla Curse consisted of a lot of French people. The Guild Master of course being one of them. His Nickname was “Net” and he played a healing priest in Curse. Net was also the owner of www.curse.com which everyone who plays wow above 5 man instances knows about. It’s the home of most Addons to the game till date. Back in Vanilla Net decided that it was time to focus on his business (building the Curse Empire that you see today) and drop the focus and time he used on World of Warcraft.

Instead of disbanding the guild or just leaving and letting the guild fend for themselves, he decided to recruit a new guy to run the guild for him who also had the job of promoting the guild. During Blackwing Lair a mage called Fura from the American guild Nightmare Asylum got known worldwide for a cleaver kiting tactic on the first boss, Razorgore. Not only was the tactic really smart but the quality of the video was above what you would normal find on the internet at that time.

Net decided to recruit Fura to curse (it’s still a rumor and I cannot confirm it, but Fura was paid to take over the job as GM in Curse while also promoting the guild with high quality movies of end bosses killed from one of the best guilds in the world). Fura is a British guy so it wasn’t a problem with playing times. He started a mage on our server and we helped him gear up and do whatever quest he needed help on. He botted most of the way to 60 as bots were kind of popular back then.

While Fura had the title of Guildmaster, he wasn’t actually the guy who was running the guild from the inside, he had help from his officers Mysth (warlock and raidleader), Mek (hunter/Shaman) and Mackenson (rogue) and in the early stages there were some old officers as well.

In Vanilla there wasn’t any MMO-Champion or Wow Progress site or anything like that. There was actually little communication between servers other than the official forums. In Curse we decided to make a who's purpose was to discuss high-end raiding from classes to bosses and tactics. You would probably not see anything like that in World of Warcraft today as guilds compete against each other instead of competing for server firsts. In general there wasn’t “as much” hype for world rankings other than the “world first”.

The forum was never a “success” as you could have hoped, however there were quite a few users who signed up and used it sometimes. It was a secret forum and you could just sign up for it. The top guilds in the US and the top guilds in Europe were invited to participate, not everyone wanted to but there was a good amount of people anyway. A lot of Americans like Elitist Jerks, Death and Taxes, Conquest, Dues Vox, Vicious Cycle joined up. The general rule was if you were a member of the guild or higher you could get access to the forum and it was pretty much up to us to decide who was worthy. Many of the things that were discussed were different bugs found in the game and class mechanics. Roles and so forth, it was my own first experience talking with other high end raiders who were playing on a similar level to myself.
A forum like this could be fun and useful today but, since there is a lot of secrecy between the top guilds during progress,  I don’t think it could happen. However, the top players and the mediocre players have come a lot closer these days as the game is getting “easier” to understand and play. Pretty much everyone who plays somewhat competitively has a decent understanding of what’s actually best for their own class and don’t need to discuss what’s up. Also tips and tricks can be learned by any skill groups now compared to Vanilla where most of the tips and tricks came from the high end raiding guilds.

As Naxxramas was the first multiple choice raid instance you had to choose between 4 different wings to start with, Spider, Plague, Death, and Abomination wing. No one actually knew what was easiest but most people suspected the Spider wing and started with that. So did we. Considering it was Patch day and the servers had been down for like 6-7 hours more than “estimated” the servers worked okay-ish, at least playable compared to what we had later on. Trash wasn’t so bad but, as expected, there were a lot of poison mobs.

The first boss of the instance, and a pretty easy one for that matter. It required 1 hunter to be fast and good positioning for your casters and healers. The room is a circle with acid surrounding most of the platform. However, there was a path you could run at the wall on the other side of the acid. This was used to kite the boss while he was doing his main wipe ability called Locust Swarm. An ability that applied a ticking dot that both silenced you and dealt massive damage to anyone within 30 yards of the boss. This meant that you couldn’t just tank it and get out-healed. We quickly realized that you needed to use the outer path to run around with the boss to the other side until the Locust swarm had expired. There were 2 ways to do this, either with a swiftness potion, or like we did with a hunter sharing Aspect of the Pack with the tank. The boss was slowed by around 40% when he cast locust swarm but he was still as quick as you could run if you didn’t have any movement speed incense. There wasn’t any heroic leap or priest to grip you, you simply didn’t have any utility spells to work with other than the aspect of the pack. So if the tank was too slow or the hunter didn’t swap to pack fast enough it could cause a wipe because the tank would be dazed and healers wouldn’t be able to get in close to heal due to the silence and damage from the Locust Swarm.

It wasn't not hard or anything but it did require you to stare at his cast abilities and react instantly when it was cast.
Other abilities included spawning Crypt Guardians throughout the fight that cleaved and left a stacking poison dot on the off tanks so you needed multiple tanks. These guys were the main focus for dps before going on the boss. When The crypt Guardian arrived, it would spawn 10-15 small scarabs that needed to be AOEd down - dying to these caused more scarabs to spawn. The last ability was Impale from the boss. Hitting anyone in a direct path of his target for around 4.000 damage and throwing them up into the air to take fall damage as well, slow fall and other abilities could be used to ease the damage taken from falling. This was pretty much rinse repeat, kiting the boss from 1 side to the other while controlling the Crypt Guardian and Scarabs. And like any other good Vanilla 40 man boss, he dropped 2 epic items, compared to the millions you get from 1 kill in 25 man today. 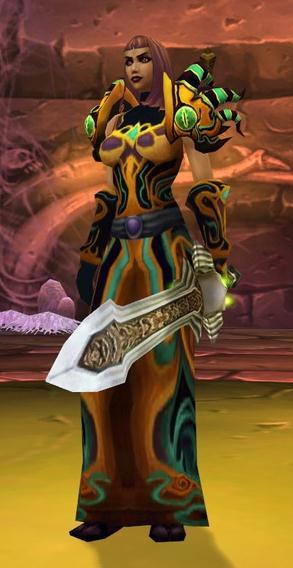 This was the 2nd boss of the Spider Wing, a boss with 6 adds: 4 worshipers and 2 followers.
The followers were the easiest of the adds, they had little health but since it was a timed DPS race you had to deal with them quickly. If you left them alive they would randomly charge people and silence in an area around them. What we did was pulling them with hunters all the way to the back of the room so they didn’t silence the healers and tanks when they picked up their mobs and then nuked them down as soon as possible. The worshipers were used to sacrifice to Faerlina so you would stop her Enrage ability. Basically every 1 min of the fight the boss would enrage, basically doubling her damage and attack speed. If you Mind Controlled a worshiper and cast a silence/interrupt spell on Faerlina with them, doing this would kill the worshiper and end the Enrage. So it was a DPS race until there weren’t any more worshipers left. If you for some reason silenced her before she had cast her Enrage it would only silence her for 30 sec as you didn’t interrupt the spell (1min cd), therefore shortening your Enrage timer.

Grand Widow Faerlina had 3 different abilities. Rain of fire like from warlocks today, hitting the ground for around 2k so you had to move out of it as soon as possible. Melee had to watch out for this, especially as she could cast it on herself.  She also had a Poison Bolt Volley that did initial damage and left a poison dot on 10 randomly selected targets. Shamans with poison cleansing totems were nice here. The last ability was the already mentioned Enrage. Wipe factors on this fight could be too low DPS as it was a DPS race, but you could also have a very frustrating time with resists on Mind Control or the MC would break as you were about to use the worshiper.