We have something special for you today, as we take a dive into raid history and its very beginnings, taking a look at the entirety of Vanilla and the weird things that happened on boss fights during World First progress! We have some very special guests here to talk to us about the various bugs and strange happenings, from two of Vanilla's top guilds, Drama and Death & Taxes. Plastique/Lenny from D&T and Nineteen from both D&T and Drama are here to take us through the experiences of two World First race guilds and the oddities, exploits and more, starting from Molten Core and ending with Naxxramas.

What we get to hear about some Ragnaros Spyglass trickery, the origins of the "Kite it to Vael's room" strategy/meme, the ingenious method of dropping a debuff on Azuregos, summoning  dead players back into the Nefarian fight, the insanity of Viscidous and more! So let's get into it, with Nineteen taking over, with comments from Plastique/Lenny throughout:

Before the age of Twitch, much of the gaming world was hidden, especially so when it involved competition at the highest level. Without donations and subscriptions streaming in, top guilds and players were not incentivized to reveal their strategies. And those strategies were often unconventional, occasionally even relying on the bugs that filled the unpolished games of that age. Some believe that using bugs is an exploit, but I’ve always held that anything done inside a game, without modifying the game, is not an exploit but a clever use of game mechanics. It’s up to the developers to moderate the use of those mechanics, not players. Also, when it happens in reverse, and bugs end up negatively impacting players, we aren’t afforded a do over. And bugs plagued Vanilla. For instance, BWL was released while devs were still putting the finishing touches on the back part of the instance, as they thought that Vaelastrasz’s inherent difficulty was enough to prevent players from progressing past him. It wasn’t, so they forcibly locked Vael’s gate, preventing guilds from moving on. Unfortunately, the lock bugged and let one guild through, Fury, while the rest were forced to sit idly by as the race to half the World Firsts in the zone slipped away. 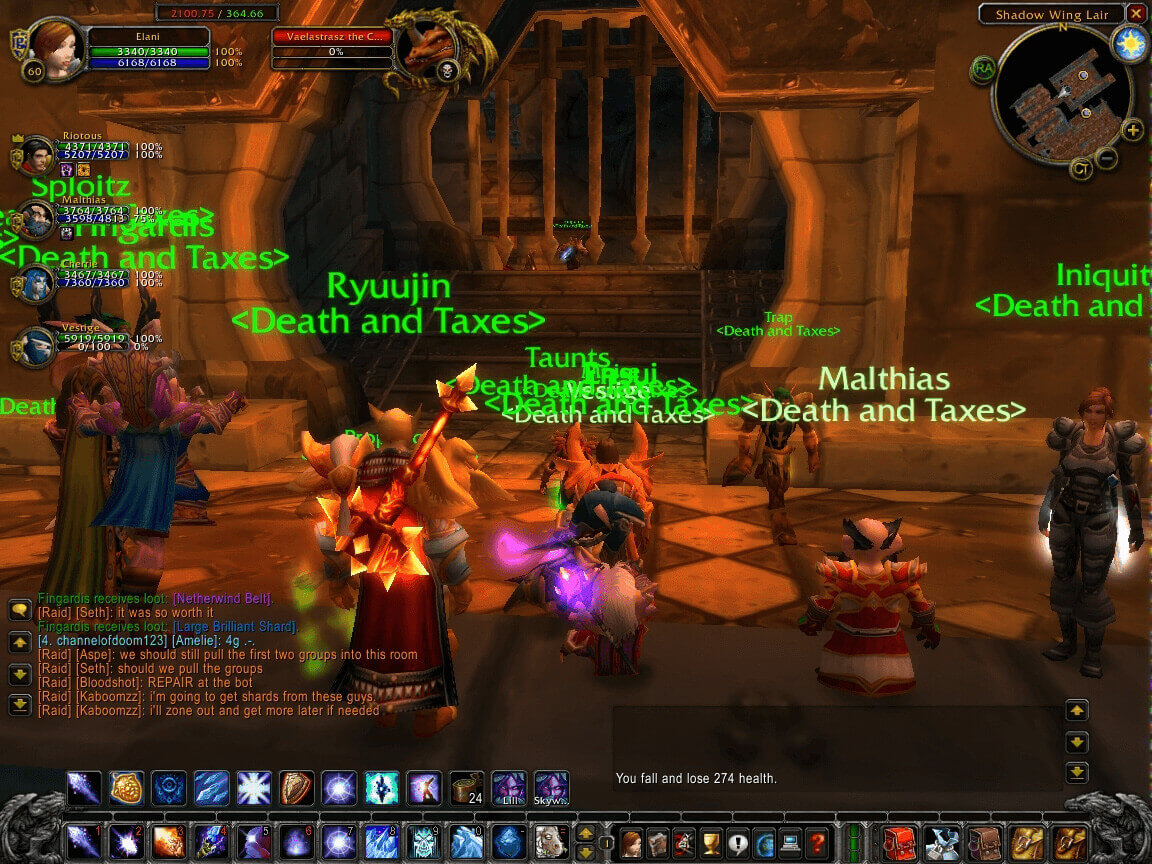 Vael’s gate locked even after he was defeated.

I do not know how the first Azuergos kill was secured but I do know that many of its subsequent kills were graveyard-zergs. Blizzard foresaw this problem though, so they marked any player that died to Azuregos with a 15-minute debuff. While marked, any players who tried to re-engage Azuregos would be frozen. This debuff persisted through death and could not be dispelled in any way...
Aside from logging out, that is. Yep, that’s right, players could just log out and when they logged back in, they were scrubbed of Azuergos’s mark and ready to rejoin the fight!

Around the time of the first Ragnaros kills there was a bug with the Ornate Spyglass, an engineering gadget. The Spyglass is an activatable item that allows players to “look far into the distance,” while rooting them in place. At the time, the root also granted immunity to knockbacks. This was particularly useful for melee DPS and tanks during the Ragnaros encounter, as they wouldn’t have to worry about Ragnaros’s knockback ability. Obviously, no one uploaded any kill videos showing themselves using the item, but there is a curious lack of melee knockbacks in early kill videos. Also, for this bug to be effective it only required a handful of players, those dealing with the melee knockback, to be in on it.

Note: There were also rumors back then that Tauren players could simply out-range the knockback because of a bug with their hitbox.

Firemaw was the only boss in the middle of BWL that fury did not secure. World First Firemaw went to Death and Taxes, who were my main competition at the time, as I was still in

Our guild was attempting Firemaw at the doorway behind Broodlord Lashlayer, using the standard LOS strat. We were getting destroyed. At some point during the night people attempted to zone out of the instance to avoid repair bills while being chased by the boss. The members who zoned back in before Firemaw reset were pulsed back into combat.

A few of our casters saw this as an opportunity to experiment. They developed a pattern of letting Firemaw chase whomever had aggro back and forth along the ledges in Vael's room, while they jumped off and ran back up the ramps. It didn't take long to recognize that the kiting was working, so the majority of the raid joined in nuking Firemaw from the floor. A flood of relief washed over us as Firemaw's HP was reduced to zero with our priests smiting, resto druids starfiring, tanks and melees shooting their bows for our guild's very first 'World First' bosskill.
- Plastique (Death and Taxes) 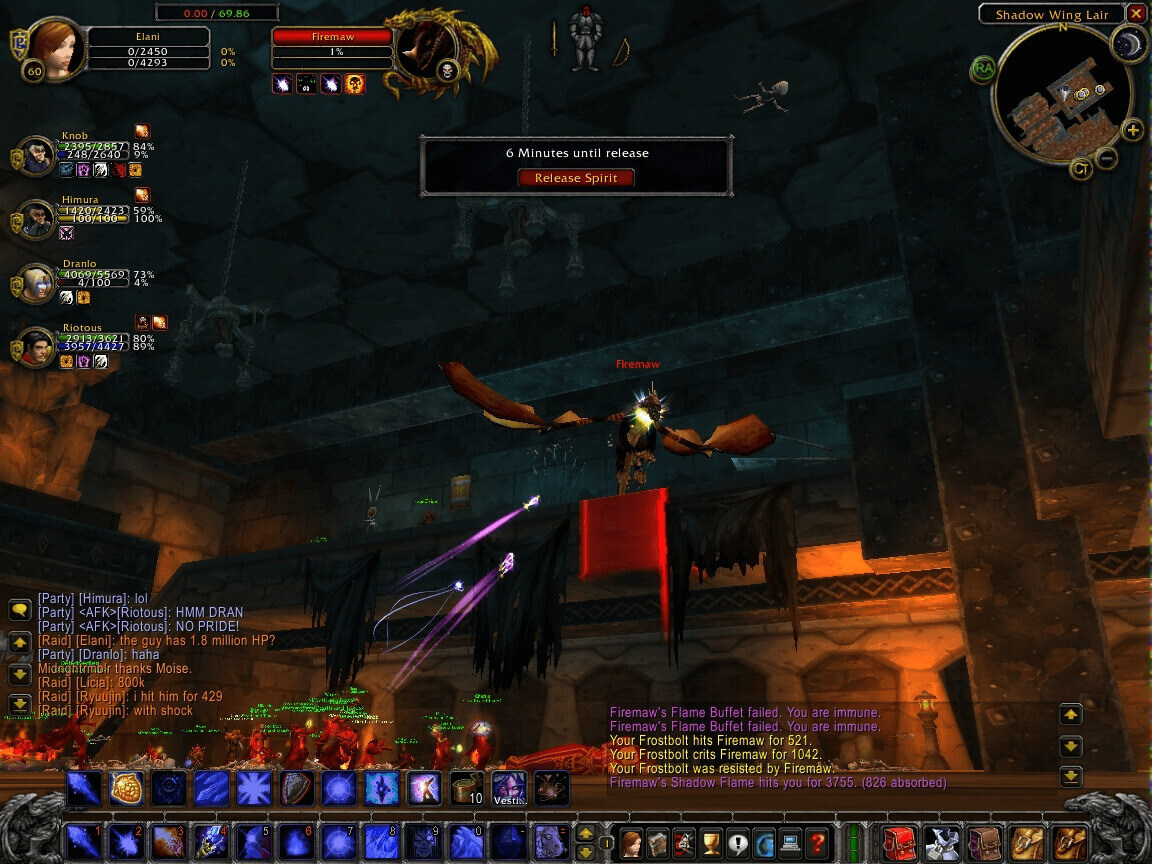 Kite it to Vael’s Room.

Searching for potential strategies was often a crapshoot. Pictured, you can see Death & Taxes testing if the kite it to Vael’s room strat would work on Chromaggus. It did not, hah. 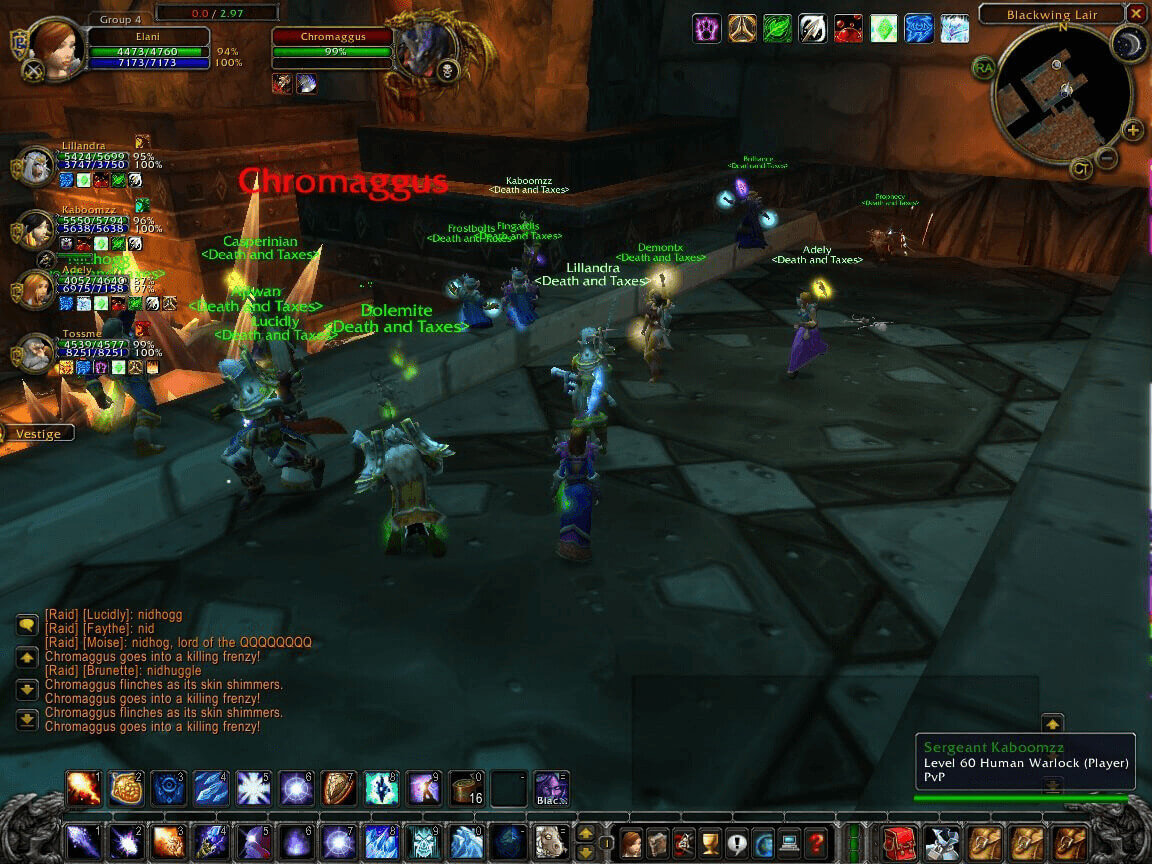 Don’t kite it to Vael’s Room.

And even when valuable strategies were discovered they didn’t always lead to World First kills. Sometimes the strategies were deemed too powerful and Blizzard stepped in to prevent their use while waiting for a hotfix. Such was the case with Chromaggus when they, Drama, caught wind (read: spied) of a new kill position being developed whereby ranged players would fight peaking over the top of a ramp. Vertically breaking LOS like this made it so that ranged players would not get hit by any of Chromaggus’s abilities. Blizzard did not plan for this and were unhappy that a guild was on the verge of defeating BWL’s penultimate challenge so easily. Blizzard really wanted players to have to break LOS horizontally, by running in and out around a corner, so GMs stepped in to halt progress. As you can see pictured, Death & Taxes was only allowed to continue attempting Chromaggus as long as they “did not attempt to use the [vertical] ‘line of sight’ issue.” Members of the raid weren’t happy to be forbidden to use a tactic they had already spent time practicing, so they were keen to return the favor and sick GMs back on 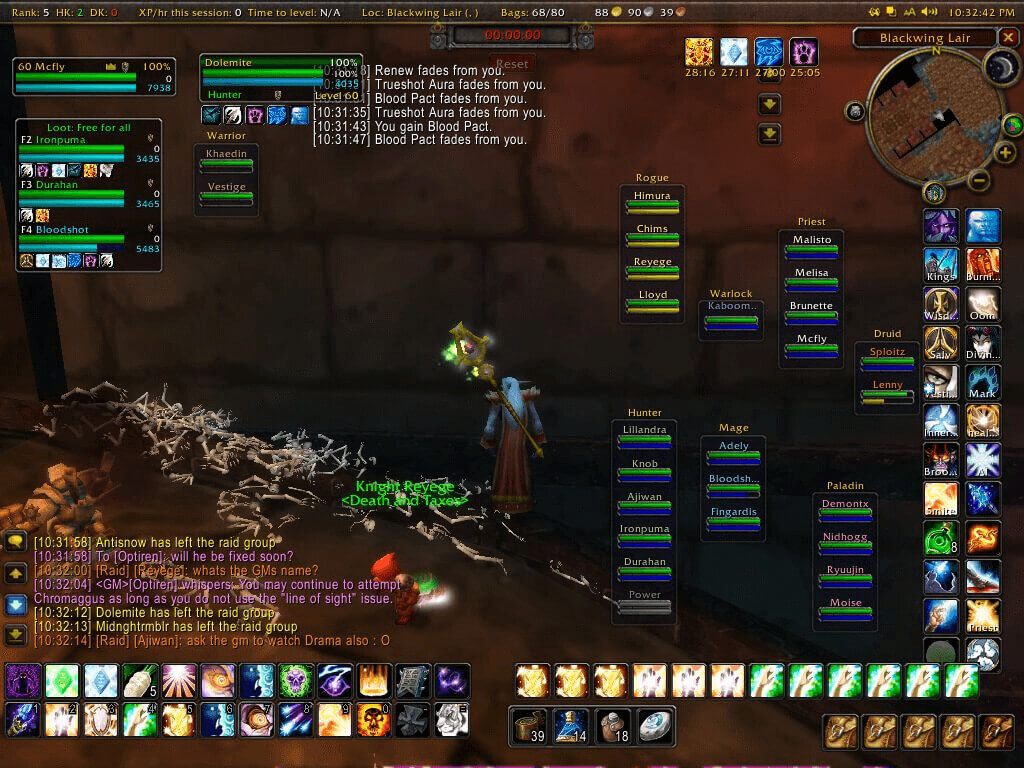 Being able to summon wasn’t the only part of the Nef encounter that didn’t work properly. There were several large pillars spread throughout Nef’s room and players who were feared into them would often fall under the map and die. This accounted for the lion’s share of deaths in our raid and gave license to the more puritanically minded players to go along with our use of summoning, as a counter bug. 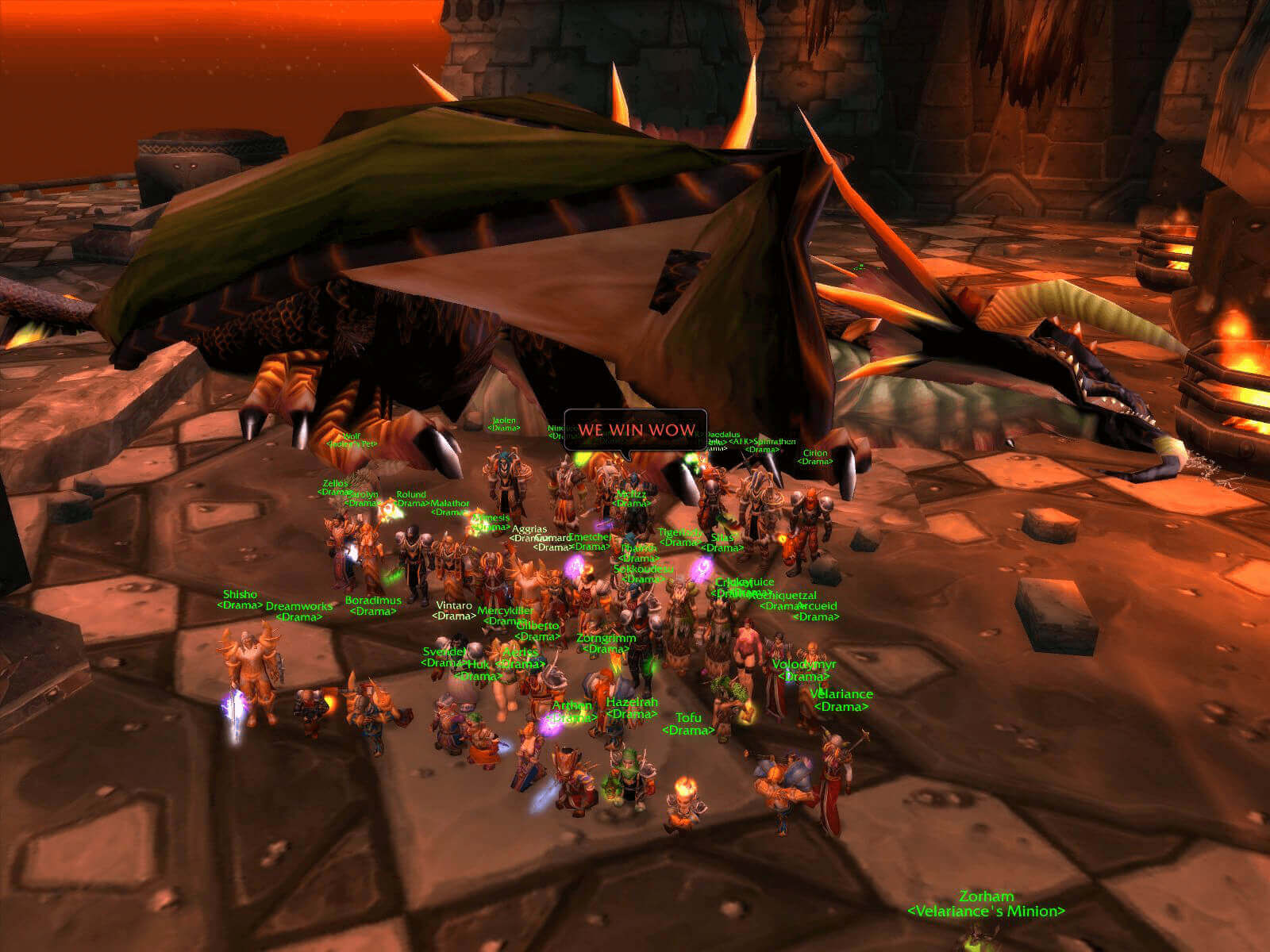 After Drama, I played for Death & Taxes. I joined them a few weeks after their World First kill on Viscidus and immediately began working on C’Thun with them. What’s interesting is that even though they had downed Viscidus weeks ago, I didn’t kill or even attempt Viscidus with them until after he was nerfed. This was unique because every prior boss went from un-killed to farm status without fail. It was also unique in that normally once the first guild downed a boss, other guilds would soon follow, yet no other guilds had killed Viscidus at that point (at least as far as I know).

Since I had never even attempted Viscidus, he was an enigma. Even the details of the first kill were shrouded in mystery. I remember asking about it and never getting a straight answer. I didn’t press the issue because I was the new guy and guilds are often cliquey. Also, whenever they talked about it, they did so with disdain stating things like “he wasn’t worth the effort.” Specifically, they said they already had gotten enough of his good loot (the spell crit sword) and had little interest in seeing another piece of his bad loot (i.e. the shaman pants as an alliance guild). Only now, 15 years later, did I have my questions answered about how pre-nerf Viscidus was killed:

The basics of the fight were to stack 6-8 mages for rank 1 Frostbolt/Blizzard and have any warlocks or priests in the raid use frost wands. Melee would use Coldrage Daggers. We stacked 7-8 resto druids for abolish poison - anything less and the fight was a nightmare. When Viscidus was frozen, everyone needed to melee him. Any casters with staves needed to unequip and punch him to increase their attack speed. Melees and hunters obviously used fast weapons, dual-wielding if they could. To further increase the rate at which Viscidus was shattered, the raid used Barov Peasant Callers at staggered intervals.

And finally, I think it was Ryuujin who started it, our engineers crafted goblin sapper charges and grenades for us to kill the oozes faster. The raid needed any AoE DPS it could get to compensate for having swapped in a slew of poorly geared resto druid alts. However, as a side effect of the sapper charges we also experienced lag spikes while they were being used. The oozes that weren't dead delayed their merging which resulted in Viscidus healing for less. This is something we experienced the first time we killed it but were able to kill it again using the same strategy, pre-nerf, without the lag.
- Plastique 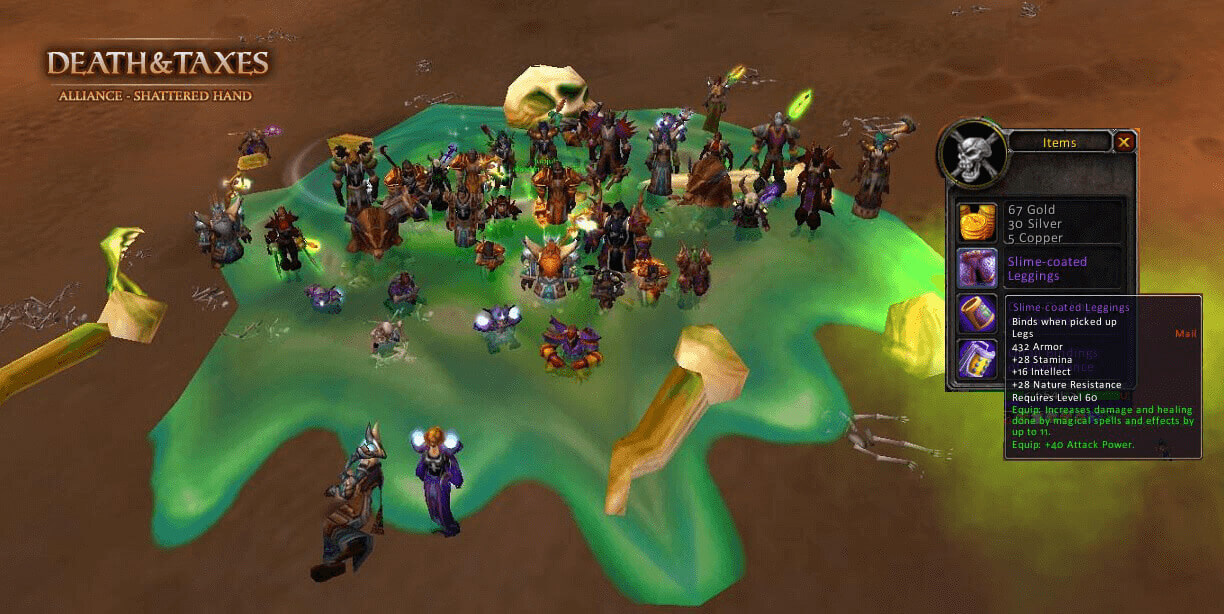 C’Thun, Naxx, and the End of Vanilla

C’Thun is remembered as being an almost impossibly hard boss yet no secret strategies were used to kill him (or Ouro), because none were needed. The end bosses of AQ were merely nerfed into the ground. They went from being walls that top guilds spent months attempting to scale, to lifeless corpses within hours of a hotfix. And that hotfix was released to EU hours before NA, which meant that C’Thun was dying as NA guilds were just zoning in, an unsatisfying end to a 2-month long competition.

As for the race to World Firsts in Naxxramas, it was basically straightforward as the bugs catalogued by Eoy were only discovered later on. During the race, the only bugs worth remembering were negative ones like server crashing lag-outs at Heigan, which halted Nihilum’s progress towards The Four Horsemen. And then there was Death and Taxes Kel’Thuzad encounter which failed to reset for an entire week which allowed not one but two other guilds to pass them.


It is disappointing that so many of Vanilla’s bosses were released in such defective states, but that was the nature of Vanilla WoW. Instead of perfectly PTRed and datamined encounters, we got an unrefined wild frontier where players often trekked out just one step behind the devs. So, cheers to those pioneering guilds of old and the creative ways in which they claimed their kills!