Raid History Raiding Outside the Box: Raid Leading Without Guides or Videos

Raiding Outside the Box: Raid Leading Without Guides or Videos

As already mentioned before our guild is one of the relatively few that deliberately do not look up boss strategies, so we can come up with them ourselves. Before we get into the why and how we do it, a few things about myself so you can see where I am coming from: my name is Tyvi and I am the DK, GM and RL of MM (give or take a few other acronyms). I have been in the same guild since I started playing WoW on release day, back when people still did not know enough Latin so we could get away with Magnae Mammae as a guild name. I started out as an officer since I was one of the founding members and aside from the first few bosses in Molten Core, we did not look up strats so this is pretty much the only form of raiding I know and I like it that way.

The effect this had on our raiding was pretty significant: since we did not let external factors influence us, we used specs that were commonly referred to as "unviable" by other players who copied other (top) guilds and took everything they said as gospel (the only requirement we had is that you knew what you were doing but that applied to every spec). It is primarily because of this attitude that I discovered the love of theory crafting and was also the reason I ended up playing my first tank: a Feral Druid, one of the most overpowered tanks in terms of EH and threat in vanilla - if you knew how to exploit their strengths and were not bogged down by preconceptions and gave it a try. So with this in mind, I also experimented with other things that were pretty uncommon at the time - like stacking avoidance when most other tanks were stacking stamina - for some pretty hilarious and effective results. 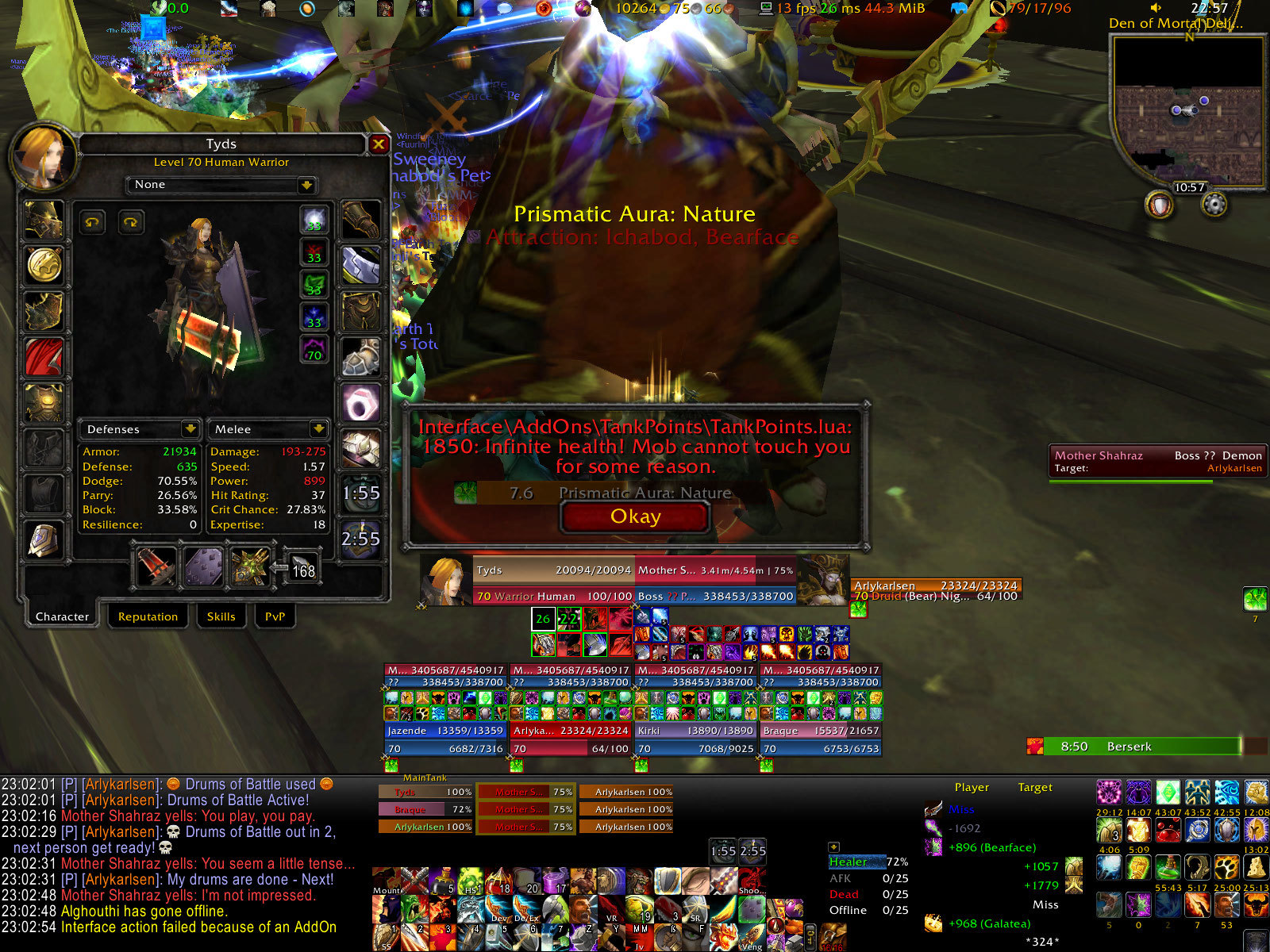 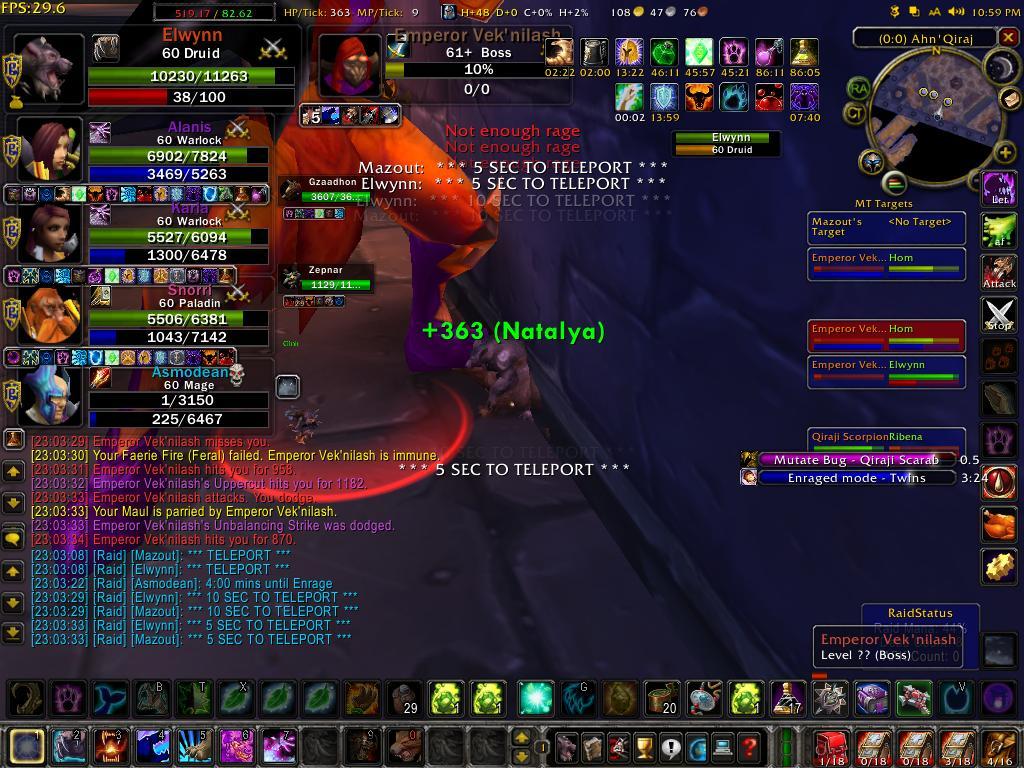 No, I do not know what I was thinking with the UI either and yes, I do take custom UI design requests, thank you for asking.

But anyway, back then I was not doing the primary raid leading, though I did help with it whenever needed, and it was not until we started doing WotLK 10 mans in our spare time that I was settled with the job, mainly because I wasn't fast enough to say 'no'. Then, just before Cataclysm hit, our previous guild master quit and I took over his role and the actual raid leading of our main raid group for good, pretty much again because I was too slow in making up an excuse why this was a terrible idea - like how the sun was permanently in my eyes while my 12 cats were jumping on the keyboard while eating my dog's homework - which would make raid leading impossible (and I totally would have gotten away with it, if it wasn't for those meddling kids). Astute readers may have spotted a pattern here, which is good because

is one of the most important skills you need to have to analyse boss fights and come up with your own strategies (if this isn't the best segue into a new paragraph on this site, I will buy a hat and eat it). Essentially, all bosses consist of the same basic building blocks that can be combined to make a new encounter - you just have to spot them and find the best way to deal with them. And after you have raided for a while, you will be able to predict some of the boss mechanics and how to handle them even during the first pull. In my opinion, puzzling out how to deal with a boss without being biased by premade strategies you might have read somewhere else is an important and fun part of learning a new boss.

For example, there are only so many ways adds can factor in a fight: sometimes you need to kill them because otherwise your tanks or your raid would start taking too much damage if you did not (Tortos bats for the former and Thok bats for the latter), sometimes you can kite them so you can do more DPS on the boss (Tortos bats again) and sometimes they are actually key in defeating the boss by dropping items you need to use or allowing you to debuff said boss (Corrupted Elementals on Lady Vashj, Mimiron bots, Horridon Dinomancers). And this is something you can be assured that you will find in future encounters as well so once you got the basics down, you are ready to make your own strategies. Finally, Blizzard is also aware of this and does include trash that has similar abilities that you will face on the bosses themselves. For example, how many of you knew that you could interrupt the eye stalks that spawn during Warlord Zon'ozz's AoE damage phase just by virtue of finding out that you could do the same during trash even though they never show a cast bar?

Challenges as a raid leader

As the raid leader you generally have to make the final call about which strategy you want to implement and know when it is time to change tactics because it is not working. You will not always be able to do this quickly because premature deaths can make discerning if the strategy is effective or not harder. So not only do you need to know if said deaths were caused by people adjusting to the strat, completely unrelated (because they screwed up doing something they were doing perfectly before) or if the strat actually makes it harder for them to survive by lowering the margin of error (for example because you are now tying up your raiders' survival cooldowns for something you dealt with differently before). For this you need both a combination of the right addons (Death Note is pretty good for finding out what people died to) and/or raiders that are actually capable of telling you themselves (cats on keyboards is our number one source of death, oddly enough).
And sometimes it turns out that the strat you were using was perfectly fine but you just lacked the required DPS or lineup to pull it off more comfortably, so you go back to a strat you discarded some time ago and kill the boss while wondering why it is so easy all of a sudden.

Additionally, you will also need people who can and are not afraid to speak up to offer improvements because as a raid leader who is also busy playing his own class, you will not always be able to see everything as well as someone directly involved (especially so if you are in different phases). Most of the time the suggestions are viable and can be implemented, sometimes you have to veto them because they just would not work out and other times they are at least worth a laugh (my only regret is that we lost the strat pic when we changed forums).

I am happy to report that things have improved considerably since WotLK for us in that regard: whereas I had to iron out most of the initial strat or cooldown rotations back then, our raiders have adjusted well and are now more autonomous in assigning themselves for CDs, healer assignments or DPS target assignments. So much that I generally do not have to look into things anymore unless stuff goes wrong or people can't figure out how to prevent their own deaths etc. Finally, it is only fair to let you know the type of boss I fear more than any: Megaera. The fact that you can kill 4 different heads in different orders means you have a huge number of permutations you can go through and that you need to test to see what works best: do you shift the burden on raid healing by killing the poison head? Do you shift it on tank healing by allowing the fire head to live for too long? Do you shift it on DPS and interrupts by killing the arcane head? Or do you want to deal with more frost kiting by killing the frost head? And once you decide to go with whatever the raid suits best, which order do you kill it on?

Someone, I will not say who, may or may not have faced the Arcane head the wrong way.
I am sure the sun and/or cats were involved in one way or another,

It probably doesn't need to be said but that kill felt really gratifying when it finally happened.

Another oddity is the fact that I actually have to tell people to cleave on Fallen Protectors because people are just so used to single targeting down the primary target to Prevent Bad Stuff From Happening ™. I mean, how often do you have to tell people to cleave more? It's crazy. If a tank tanks in a forest of tanks but no one is there to hear him taunt, does he still beat everyone on DPS?

So how does this method of raiding affect me as a tank besides what I mentioned before? Surprisingly little, actually. I still do whatever helps us get the kill and amusingly enough, this usually is more about optimizing my DPS than survival (because the latter is generally a non-issue, both because we are a 10 man guild and because my co-tank is a Paladin who just loves getting all his Hands on me) since every little bit of DPS matters, regardless of the source (and let no one else tell you otherwise). 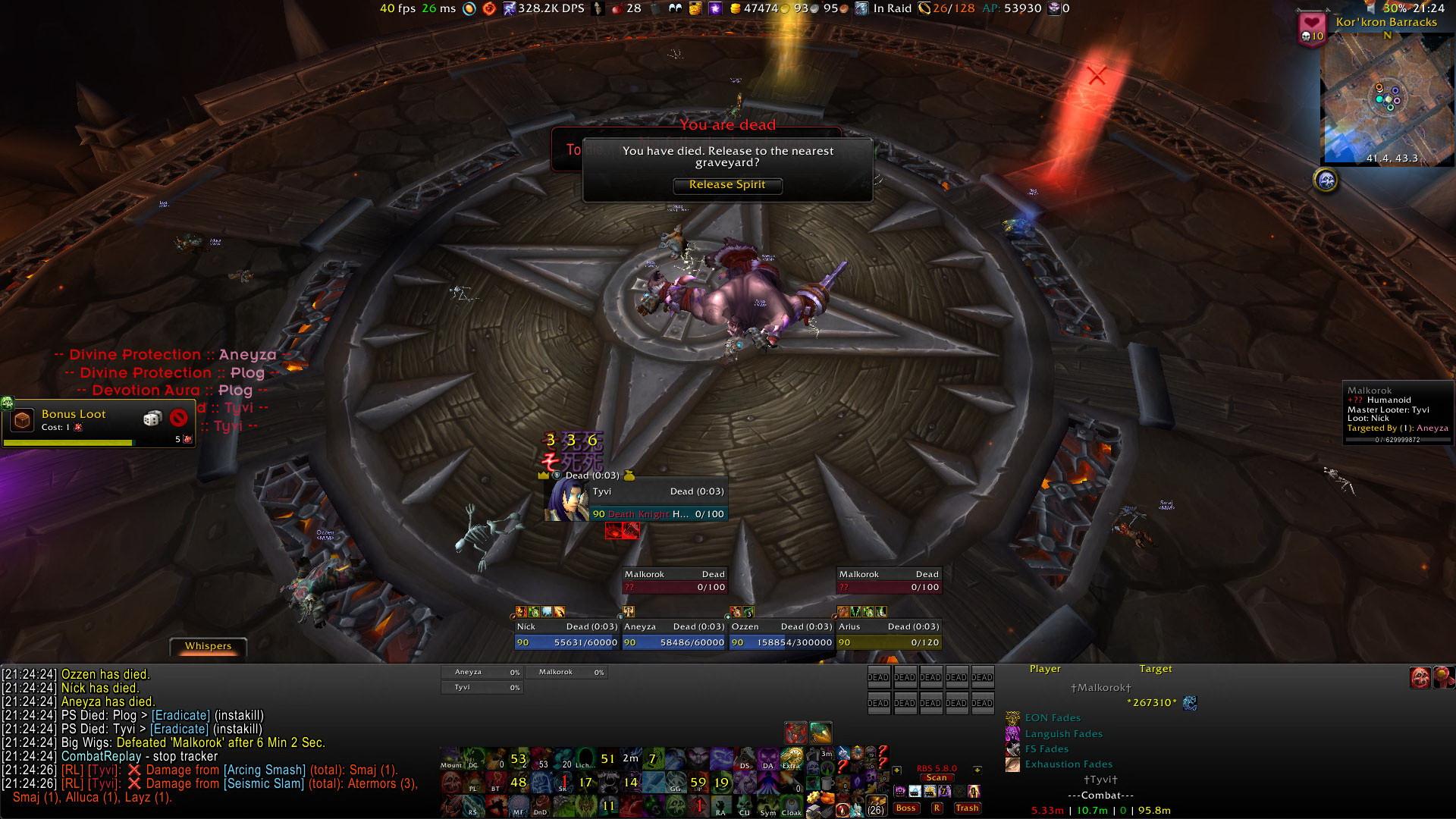 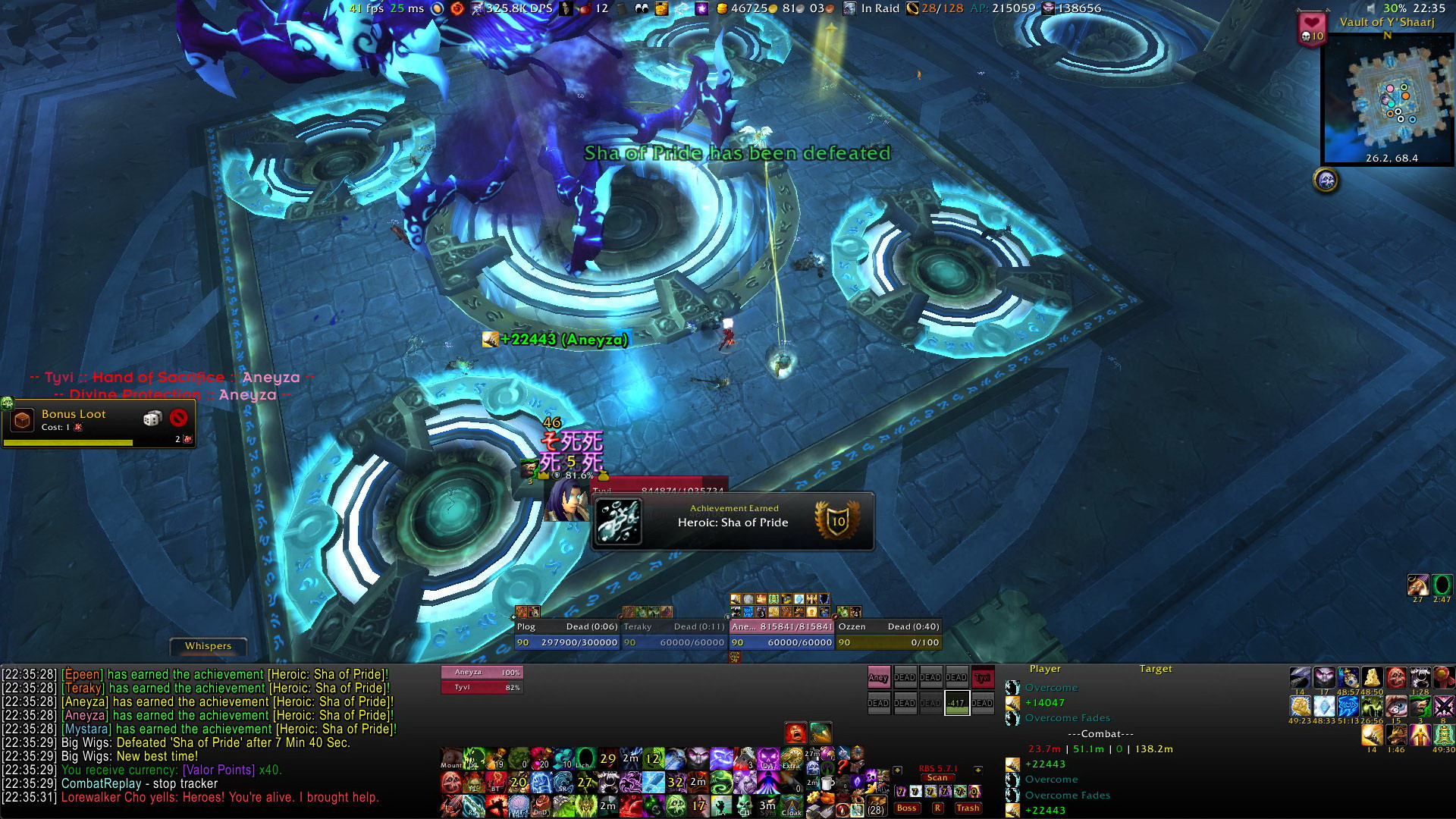 Aside from our strat reflecting this (i.e. Megaera adds were killed pretty much by the tank solo) that is about it. There is of course the fact that you work closely together with your healers and your co-tank to determine what is feasible and what is not but I imagine this is the same for nearly every other guild out there.

And since this article is getting longer than I had anticipated, you can read the Blood Tanking thread on Elitist Jerks if you are interested in my tank philosophy.