News Mythic+ Tips: De Other Side

Mythic+ Tips De Other Side

The second dungeon in this series is De Other Side. My name is DanWarr and I will be taking you through each of the Shadowlands dungeons, giving you tips for each that may make your runs go smoother. These tips are primarily for fairly new players to the dungeon or Mythic Plus, but stick around even if you’re a Keystone Master! Who knows, you might pick up something new!

There are 4 Urns placed around the dungeon that can be interacted with by any member of the Night Fae Covenant. When clicked, this Urn will explode, stunning any and all nearby mobs for several seconds.

Due to their locations, these Urns can make several, normally problematic packs, far easier, especially for your tank. In particular, there is an Urn close to the first patrolling Enraged Spirit if you go right at the start of the dungeon. The Enraged Spirit patrols between the stairs to the Zul Gurub area with Hakkar and the Mechagon area with the Manastorms.

If you click the Urn right as the Enraged Spirit loses the buff that spawns the Enraged Masks, you will land the stun after only 1 tick of the Rage cast, removing all unavoidable group wide damage and turning this normally deadly mob into a regular mob. 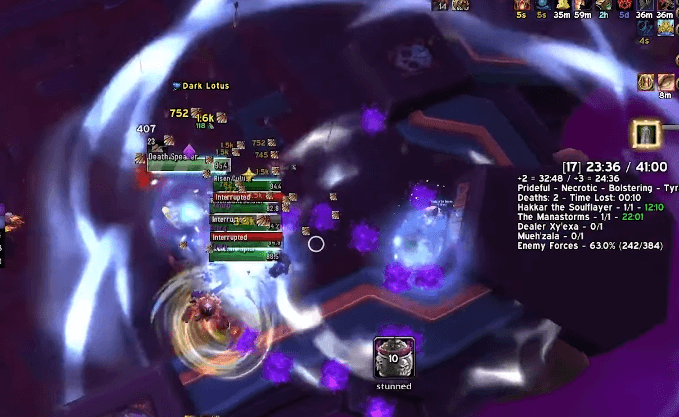 One of Hakkar’s main abilities is Blood Barrier. This ability alone slows down boss kills significantly, especially if you are ever forced to face the boss without a Prideful buff or Bloodlust.

The initial cast of Blood Barrier does party-wide damage, the amount of damage inflicted by this ability determines how large the shield gained by Hakkar is. What makes this ability worse is that the damage done by the initial cast also hits the adds summoned by the boss, Sons of Hakkar. This makes killing, or at least damaging, the adds vital to avoid an outrageously large shield.

Note that because the shield is based off of damage taken, using a personal or group-wide damage reduction cooldown will also help minimise the size of Hakkar’s barrier.

Everyone is familiar with the Slime gauntlet in the Mechagon wing and I’m sure many of us have had unfortunate incidents with these slimes. However, at the entrance to this area just to the left of the doorway there is a button that can be used by any Shadowlands Engineer.

When used, the gauntlet is paused for quite a substantial amount of time, allowing you and your group to pass freely without fear.

Quite an underrated boss in the dungeon in terms of difficulty, particularly on Tyrannical. Dealer Xy’exa inflicts players with a debuff that deals quite significant amounts of damage over time before expiring and jumping to the next closest player. Each tick of this DoT also leaves an Arcane Vulnerability debuff, increasing all Arcane damage taken by 5% per stack. Since the bomb mechanic in this fight is also Arcane damage it is important to continually reset this debuff.

By bouncing the Arcane Lightning DoT between 3 players in a rotation, no one will ever take more than 4 stacks of the Vulnerability debuff, which remains well within a reasonable healing range.

With plenty of DPS and good footwork, Mueh’zala is one of the easier bosses to take down in relation to the other bosses in the dungeon. However, we have all had those unfortunate moments where one platform has failed to kill their mob and click the totem in time. At this point, it is important to identify which platform failed and which portal the group needs to take on the next intermission phase. Identifying the platform is as simple as seeing which platform still has an active totem. 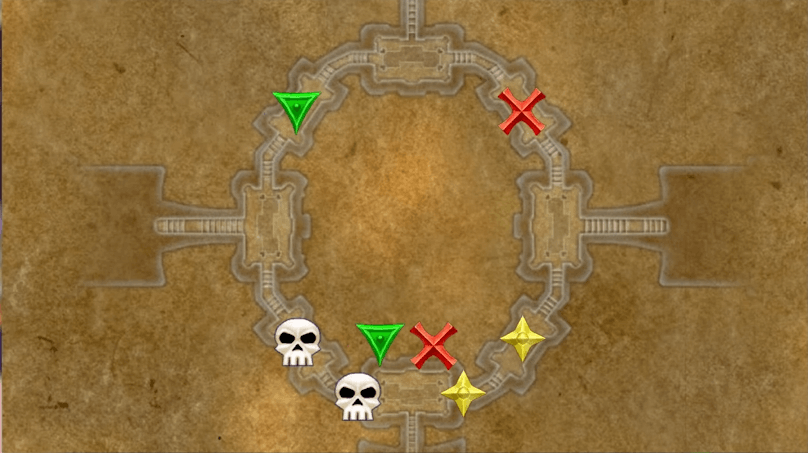 The portal relating to that platform is relative to its spawn location. For example; here you can see four markers indicating the portal spawns.

This is true no matter which platform you are fighting the boss on.