Another week, another Mancy's Ensidia entry! Besides the usual (amazing music, AMAZING music and the raid review) this week I'll be doing a top 10 fails in raid environment compilation, so do not miss it!

4.1 this week, our raid was scheduled for Wednesday at 18:30. Surprisingly enough, being a patchday (4.1 HOORAY) the server was really unstable and laggy, but afraid we were not!

So, we started with Bastion of Twilight and I was arcane all the way. I enjoyed Halfus as I managed to beat the tank (you know, arcane and multi target...), Theralion soon followed and then it was Ascendant Council time. Since we never have any trouble on this boss anyway, I believe we one-shot it and it wasn't even close. It was one of the cleanest kills we've had, just like Nefarian (you can read about it in last week's article).

After that we destroyed Cho'gal and Sinestra and headed to Blackwing Descent. We heard about a bug on Omnotron that made the boss unkillable since it would randomly reset and stuff, so we were prepared for that. What we were not prepared for, however, was 3k MS on everyone and 5sec delay on spells. But we were not discouraged, we went to Throne of the Four Winds instead!

Conclave died and so did Alakir, not much to say there besides the usual: This Al'akir caster sword does not exist and is pure fiction. I shouldn't whine about loot though, since I managed to get 3 items already : Theralion's Mirror, Shard of Woe, Master/Hit trinket from Conclave!

Some people wanted to go back to Blackwing Descent, but we decided to stop for the day and go back on Thursday. The bugs were fixed and everything went down really fast. I actually enjoyed doing it this way, splitting the raid in two. It makes it way more interesting and less tiring!

With the main raid over, everyone was looking forward to Monday's alt raid. It was high time we did some hardmodes too! Namely Halfus, Omnotron, Atramedes, Maloriak. We barely wiped so all in all it was a pretty interesting raid. I have to note though, this Rivah guy almost managed to wipe us on Atramedes. He was supposed to use shields during Searing Flame and interrupt the cast, and well, you can see the outcome. 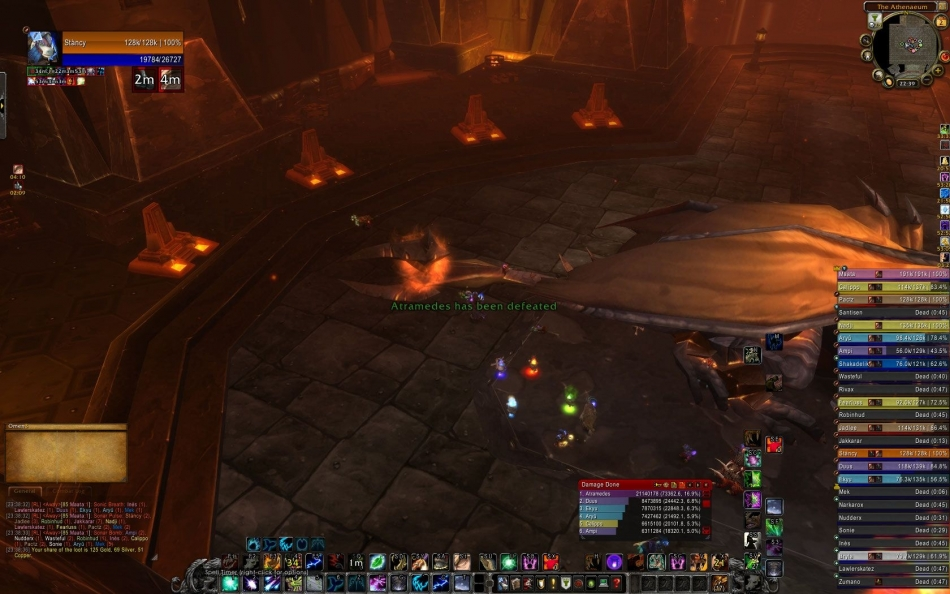 Besides raids, we have even more recruits now so everything is looking cool. On top of that, our beloved Shadow priest Inz is returning! He is (slowly)leveling up his priest to join our ranks again. His return brought back a lot of chatting about the old times, so I decided to fix this top10 mess up in Cataclysm list. What is it ? Well, the top 10 biggest mess ups in a raid in Cataclysm according to my opinion. They aren't listed in any particular order.

Kiting Nefarian adds by Kungen. This isn't really a mistake, but it's kinda funny anyway. Our first idea for last phase was to have our tank kite the adds. After a few tries, Kungen deemed it impossible so we tried some weird 4 tank tactic. Next day: Premonition releases a vid of a warrior tanking. GG KUNGEN.

Not using healthstone on Ascendant Council by Rivah. We wiped on hm... 4k hp left on the boss I believe? During progress that is. And Rivah was the only one that didn't use Healthstone before he died, nor dispersion (pretty sure like 1 more dot tick would have changed the outcome).

Conclave by Azmara. There is really not a specific mistake, but this Azmara guy just managed to die every single time we attempted this boss by everything. Wind platform: he dies to Wind Blast, Tornado, Shield, without using healthstone. Nature platform: I don't know, he managed to die anyway. He is no longer in the guild, but it was pretty funny!

Sinestra orbs, by Minci and later Aliandramk (go team priest). First off, during progress: we have the boss on 4% and we get the last wave of orbs spawning.. One of them is on Minci, a priest. He doesn't notice it, everyone tells him on vent to move, and he moves straight through the raid cutting everyone instead, resulting in a wipe. That's pretty cool, thinking that we actually took 2 more days to kill the boss and lost a rank in the mean time. Then we have Aliandramk ruining achievement (like a month before we got it) but that's not as big!

Dark pool things on Maloriak hardmode by Stayven! It's progress time and after wiping a bit it's about time we kill Maloriak. But no! As he is busy giving direction to the other healers since he is, you know, the raid leader, he suddenly dies and goes on vent "What the hell how did I die". I guess those huge dark pools that put a dot on you are hard to notice!

Speaking of Maloriak, we had this very funny incident with Ushra. He managed to die during the Dark Phase and when he was asked how he died, he blamed it on melee for not interrupting Arcane Storm. While that seems fine, it suddenly occured to us that there is no Arcane Storm during Dark phase. And that was pretty awkward for him!

During Theralion and Valiona encounter, there's this very difficult to deal with spell called Meteor. During progress on that boss (normal mode even), Team Legacy (Inz, Rivah and me) just outshined everyone! First off, Inz manages to die to the meteor since he didn't pack up on melee when he had the arrow/debuff. Then, it's said on vent that everyone should focus and hurry to pack up. Next meteor: Rivah, he doesn't notice and dies aswell. I'm busy laughing at him on vent, and guess what: Next meteor, Mancy down. This was one of the most hilarious moments of Cataclysm raiding.

While we're on the subject, we also had this pretty huge amount of BoP fails on Ascendant Council, when you had to BoP the bubble the boss casts. There is no one to name and shame here, because literally every Paladin we've had would just fail on it or be slow!

Speaking of Ascendant Council and paladins, there was this guy Komplexa... he was a true hero. Besides failing with bops and getting the correct debuff, he was best at kiting Frost Orbs. I will never forget his performance of hugging a wall with the frost orb coming to him and begging for a grip!

Last but not least.. on Theralion and Valiona again. This time I'm the star. It's not during progress but during farm instead. So the boss is at about 2-3% and it's going bad, half the raid is dead but it seems doable since it's so low already. I'm about to die, and I think: okay, time to be pro and show everyone how good engineering is. So I use the engineering belt enchantment, which gives me a shield that absorbs 20k damage. However, it has a chance to malfunction and taunt the boss instead! Long story short, I wiped the raid since I taunted the boss and melee moved out of range and died.