Welcome to another edition of Mancy's Ensidia! In this entry we have the first suicidal expansion reactions from Ensidia members, a lot of PTR action and Deify's new catchphrase (that's a bit old, but gotta mention it).

In regards to the main raid, it took place on Friday, same day as Blizzcon since people couldn't show up on Wednesday and Thursday, so I'll talk about it later. So, starting with the PTR raids, there was some 10man testing on Monday and Tuesday night, nothing special there. We ran 3 10-man groups on Monday and 2 10-man groups on Tuesday. In the following screenshot you can see who the pros were in my group: (Falz and Tador are some great people from Apex that decided to help us out) 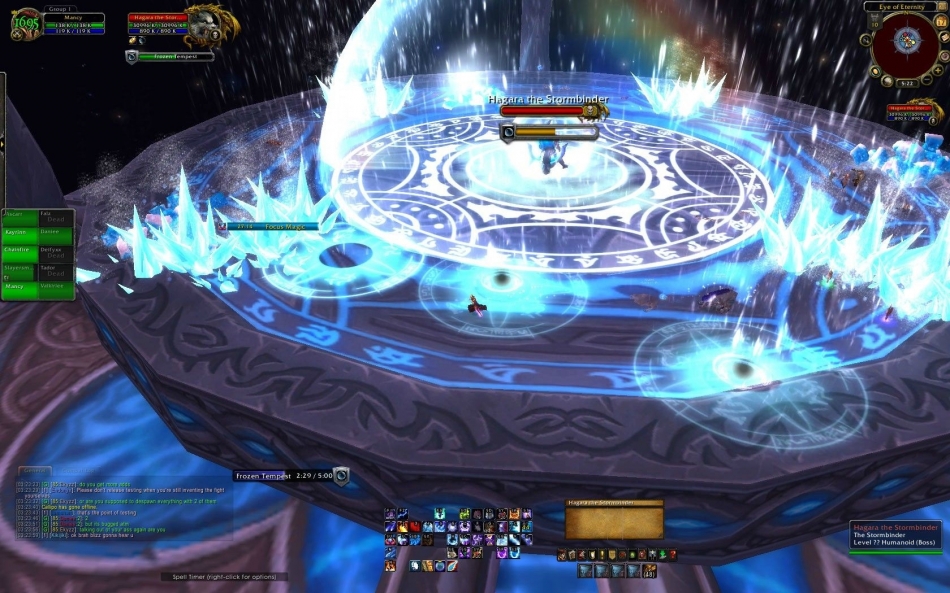 We tested Warlord Zon'ozz, Hagara, Ultraxion, Warmaster Blackhorn (Gunship v2) and Spine of Deathwing. Ultraxion is definitely one of the better looking boss, but Deathwing's Spine is also pretty interesting: 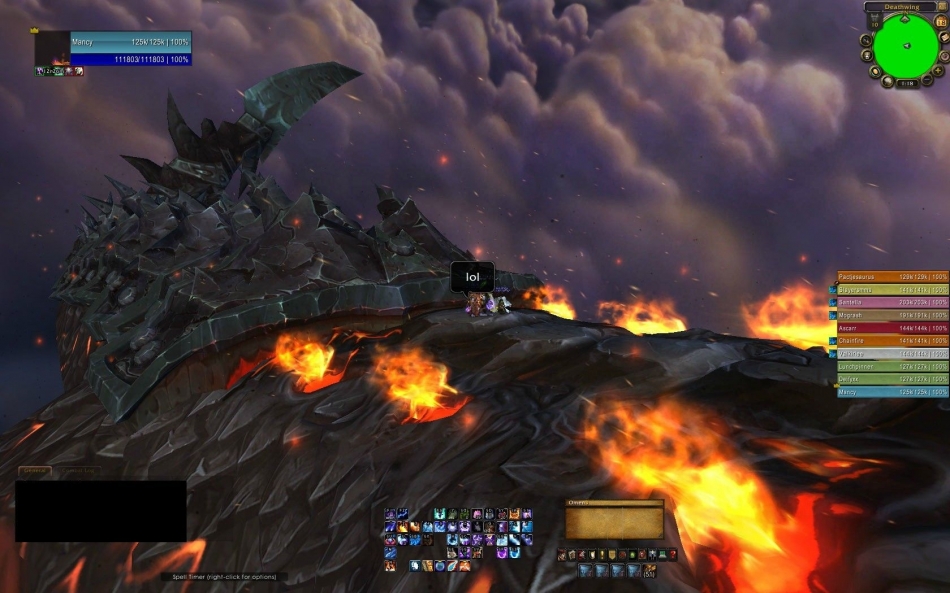 Thankfully the raid times have been closer to normal this time around (no 05:00 testing) and soon came 25man testing, wherewe tested Yor'sahj the Unsleeping, Ultraxion on Wednesday and Morchok, Hagara, Spine of Deathwing on Thursday. Testing was a lot smoother as well, bosses weren't too buggy and were actually testable. All the encounters look pretty interesting, although fairly easy. One of the most annoying bugs was on 25-man testing of Spine of Deathwing : In order to get ported to the Spine, you need to talk to an NPC on the ship where the Gunship fight takes place. Thing is, this NPC tends to disappear instead of porting you, something that ended up being quite frustrating. All the frustration was gone however, as we started teasing Caleb for being way too naive and believing everything his streamers told him : changing difficulty, using different teleport options, standing still while talking to the NPC and other stuff like that. 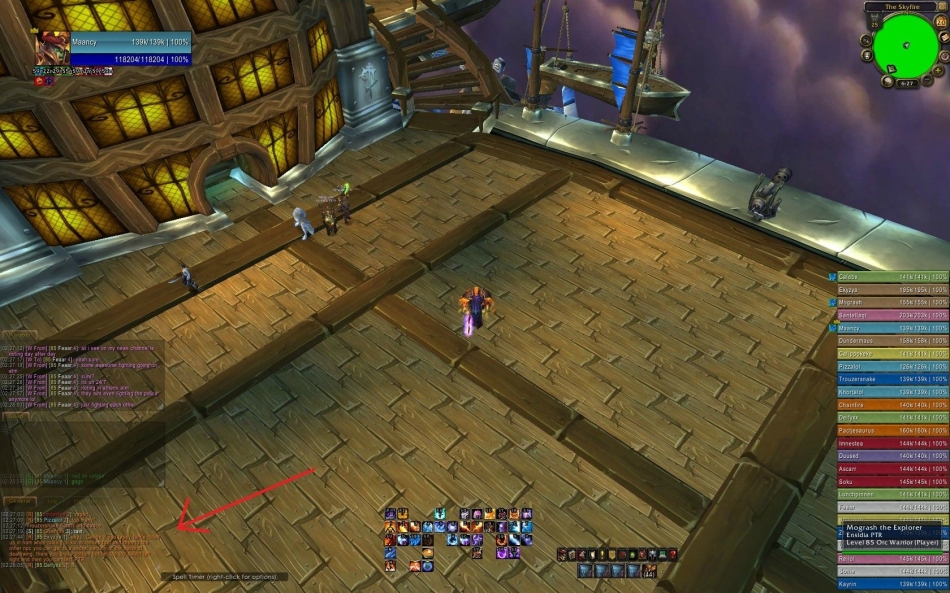 Anyway, that pretty much sums up the PTR so far. I suppose we'll soon have Heroic mode testing, so can't wait to see how that will pan out. In the meantime, we have our Friday's raid. We did clear 6/7 HC on the first 25man Group on Wednesday, since there was some downtime between boss testing, so we didn't have that much to do. So we started with the second group and started clearing. As you might imagine, raiding while Blizzcon is taking place and all the cool expansion features are being announced isn't the best thing, so the raid wasn't the smoothest one we had. Sure, everything went fine up to Ragnaros, but this is where the pain started. People weren't focused on the raid but on the stream, so we did have quite a few wipes. To give an example of our wipes, during the time where Warlock changes were announced, you could see Duus standing still not casting Shadowbolt, not using any other abilties or moving. On another one of our wipes, when the Pet Battle system was being announced, Zumadin was so shocked that he actually stepped into a Magma trap during phase 2 and killed us all, kamikazi style. I guess he wasn't happy with the changes. Let's just say we weren't exactly happy with some of the changes, so the climate was pretty negative, however after some french yelling people focused, closed the streams, stopped lagging (yes I'm talking about myself in the 3rd person here) and finally killed the boss. It was getting pretty late, but we didn't stop, instead we formed the first raid and one-shot Ragnaros there. Goal achieved!

Before we started, we had some confusion about who was marked as the Moon (showing where the proper position is in the frost patch) and so Deify developed a new catchphrase : YOU IS NOOB

I'd like to say a few more things about the expansion. As I mentioned earlier, most of us received it pretty negatively. Why? Well, plenty of reasons. First of, getting Kung-Fu Pandas, PvE Scenarios, 5man challenge modes and Pet Battling and Trading isn't really the best you can ask for your game if you take it seriously. But even besides that, there was basically 0 mentioning of raids. They said there will be 14 bosses (mistake, as we saw on Cataclysm launch) and showed us the interior of an instance that was already changed. So I think it's pretty understandable that we weren't positively surprised, given how much they mentioned raiding and we are a group of hardcore raiders. Anyway, I'm sure most will stick around and see how it actually unravels, who knows, maybe we will be positively surprised in the end!

Another thing I wanna mention is our great 10-man group on Monday that did 6/7 HC. Skaanky (Maanky, my warlock) was the leader. Well, people should have known better than joining a group I was leading. Sadly, they didn't. So we started, cleared all the trash til Shannox spawned, pulled him and then realised that it was on Normal mode. So we released and started running back. On the way to the instance, I noticed Ascarx (rogue) was alive, so I thought he Vanished or whatever and was going to ress us, so I changed the difficulty to 10man Heroic. Surprised was I to see that Ascarx was in Orgrimmar, so noone was actually in the instance when I changed the difficulty. The result? Trash respawned, so we had to kill them again. Needless to say, people in the raid weren't that happy, but we did end up getting plenty of BoEs so in the end, it all worked out.

And that's pretty much it for this week's Mancy's Ensidia. Stay tuned next week for (hopefully) recent roster changes as well as some drama. I promise, there will be some. If there isn't, I'll create some and screenshot it.

HyperX joins the expedition into Wrath of the Lich King Classic