UPDATE - Sep 07 15:36 CET by Starym And the Top 50 is done, as is our coverage of tier 18 and Mythic Hellfire Citadel! It's been a hell of a ride and probably one of the better races so far in WoW's history, so let's hope Legion isn't too far away and brings us the same quality of raids and bosses WoD did (and that all the top guilds manage to stay together until then!). See you next time!

Here are the final three finishers, and they're nice and diverse: Chinese guild 魔神 (Devil), Drive from the EU and Easy from the US! Congratulations to every guild that managed to finish up Mythic and down Archimonde, regardless of position, that takes some dedication.

UPDATE - Aug 30 15:22 CET by Starym Long time. no update, so here's the latest guilds that managed to finish up tier 18 in spots 38-47  : Consequence, NollTvåTre, Рак Гейминг, Error Code, B Negative, The Fallen, Embody, Enraged Revolution, Promethean and Devil. Big GZ to all of them!

UPDATE - Aug 24 14:24 CET by Starym Seven more guilds have finished up HFC Mythic since we last checked in and claimed spots 31-37. They are: 炼 狱, Fusion, Reckoning, 傲血荣耀, Punishment of Asia, eXample and Huge in Japan.

UPDATE - Aug 15 19:35 CET by Starym More Archimonde kills as we move away from the top 20. Force of Creation, Nova, Forgotten Name and WHATEVER WERE AWESOME claim spots 27-30.

UPDATE - Aug 12 19:41 CET by Starym Quite a few new Archimonde kills in the last day, with Wave Flow getting the World 24th and the bigger news being the US/OC top 5 being done. Midwinter managed to finally down the big guy and finished US/OC 4th, just ahead of Ascension who ended up 5th!

UPDATE - Aug 11 16:25 CET by Starym There's been some more kills in the past few days, but let's start with the US/OC No.3, namely vodka, who got Archi down a few hours ago. Spot 20 was claimed a few days ago by 丨金錢丶魅劦丨and 21 yesterday by Openness with vodka coming in 23rd. GZ to all three guilds! 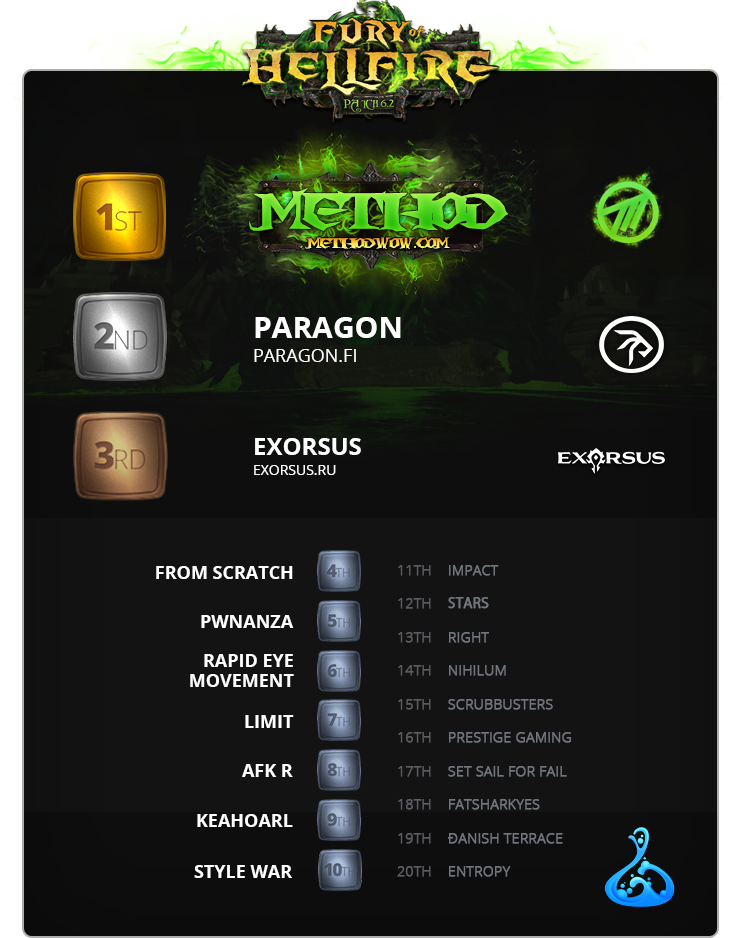 UPDATE - Aug 03 14:17 CET by Kozmo Stars join the party and takes down Archimonde aswell which places them as number 12 in the world, 4th in Asia. 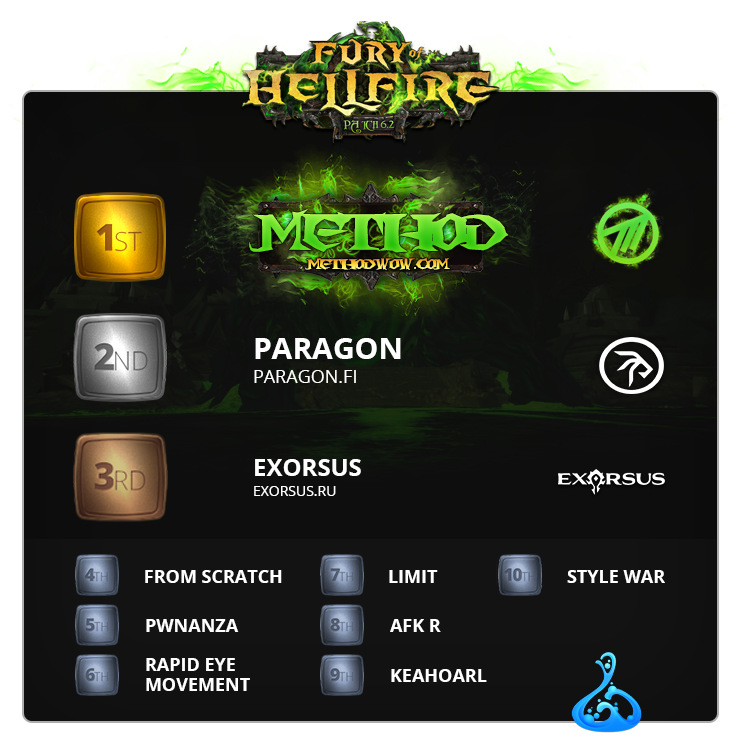 UPDATE - Aug 01 10:00 CET by Starym We have a US/OC first! Limit claim this tier as their own as they down Archimonde and finish up Hellfire Citadel as US champions as well as World 7th! 13/13

UPDATE - Jul 31 21:26 CET by Starym And we have a 6th guild across the finish line! Another one from the EU, it's Rapid Eye Movement downing Archimonde and done at 13/13. Gz to them! 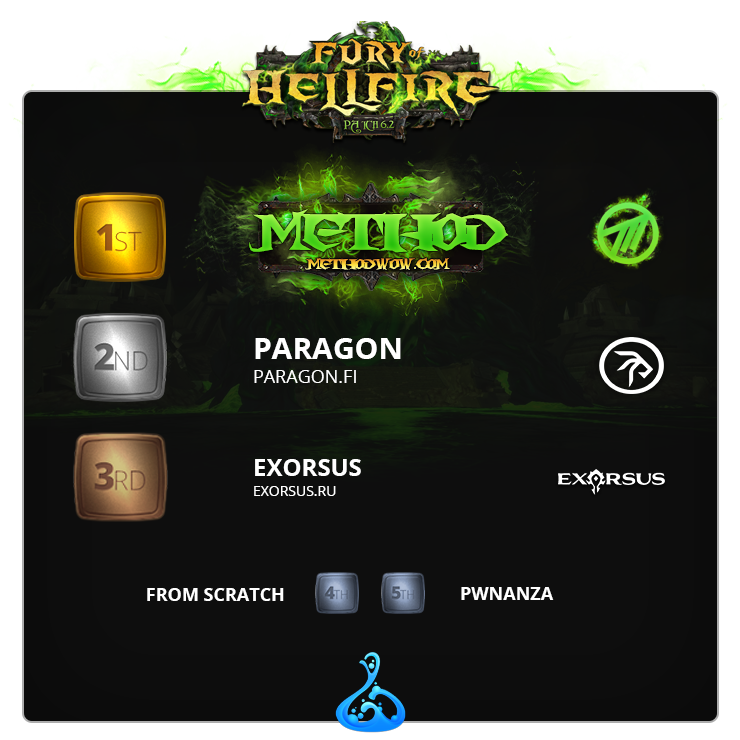 UPDATE - Jul 30 19:16 CET by Starym Pwnanza pull quite an upset and claim the World 5th on Archimonde, closing out the top 5 before both Midwinter, REM and both Asian guilds! Huge GZ to the guild on their 13/13, and it seems we have a full EU top 5.

UPDATE - Jul 28 23:14 CET by Starym As with the kill itself, Paragon aren't far behind on posting their video:

UPDATE - Jul 27 21:58 CET by Starym We have a fourth guild that's done with HFC! It seems that screenshot motivated From Scratch somehow as they claim the World 4th on Archimonde! Huge gz on the finish before the next reset. We're still waiting for those US and Asian firsts.

UPDATE - Jul 27 19:31 CET by Starym Thanks to 王雄 ‏@CoBeTDH on Twitter we got a taste of Phase 3 Archimonde Mythic: 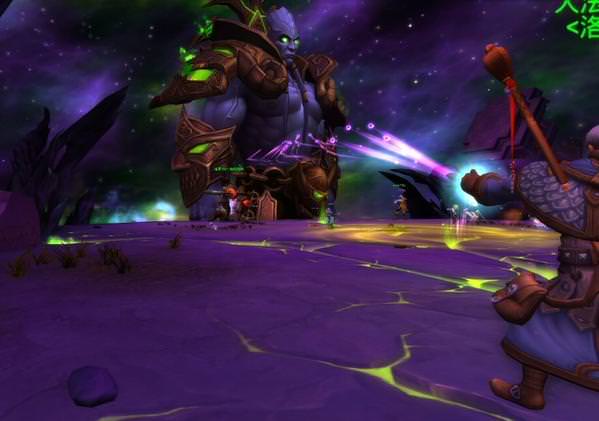 UPDATE - Jul 26 23:13 CET by Starym A few more guilds downed Mannoroth, the lastest being Nihilum just now. Set sail for fail got him just alittle beofre Nihilum and Impact and ScrubBusters also got to 12/13 yesterday, gz at all four!

UPDATE - Jul 23 22:00 CET by Starym Literally seconds after I posted a facebook update hyping up the bronze race Exorsus go and ruin it! They got Archimonde down World third and clear HFC, 13/13! Congratulations to them! I guess it's time to hype the top 5!
Killshot: 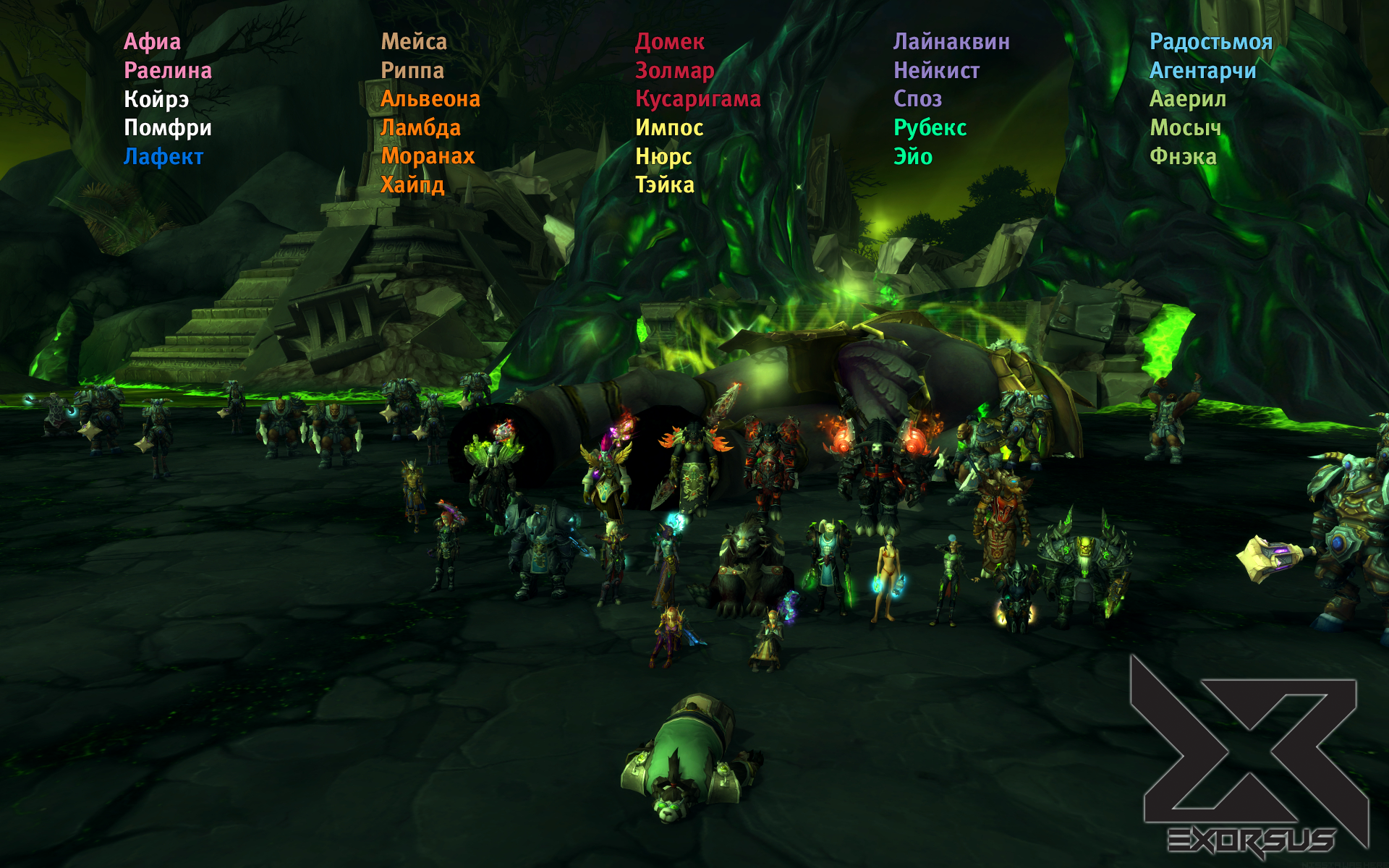 UPDATE - Jul 23 20:23 CET by Starym It seems Envy isn't as done as some grim commenters were saying. They're still in there, clearing bosses and managed to get the EU 9th on Mannoroth and slot into overall 17th.

UPDATE - Jul 22 21:14 CET by Starym Another Asian guild gets past Mannoroth just before their reset, setting them up with at least a chance at that World 3rd finish. KIN Raiders claim the Asia 5th and move into 15th overall. 12/13.

UPDATE - Jul 22 17:50 CET by aenima Right down Mannoroth for an Asian 4th/World 14th kill, making it now 12 guilds in chase of Method and Paragon and the World Third Kill on Archi.

UPDATE - Jul 22 01:59 CET by Starym Mannoroth down again, for the 12th time and Russian guild Openness claims the EU 8th, moves into 12th overall. Plenty of guilds now on Archimonde, that World third is getting close - can anyone beat Midwinter's 1 day extra loot/legendary rings advantage?

UPDATE - Jul 21 18:55 CET by Kozmo Mannoroth is having a bad day as yet another guild takes him down, this time its Prestige Gaming who gets the kill, World 11th, EU 7th.

UPDATE - Jul 21 16:41 CET by Kozmo We have some stats on Method and Paragon's wipe counter throughout the entire Hellfire Citadel.

UPDATE - Jul 18 18:20 CET by Kozmo And it is Paragon with the silver after all, World 2nd Archimonde, 13/13. It really has been an incredible race (and it's not over yet, that fight over 3rd seems like it'll be quite intense) and we have to thank both Method and Paragon for giving us one of the best progress tiers ever. Let's just hope we get more like these in the future! Also, 3 more to go until it's video time! 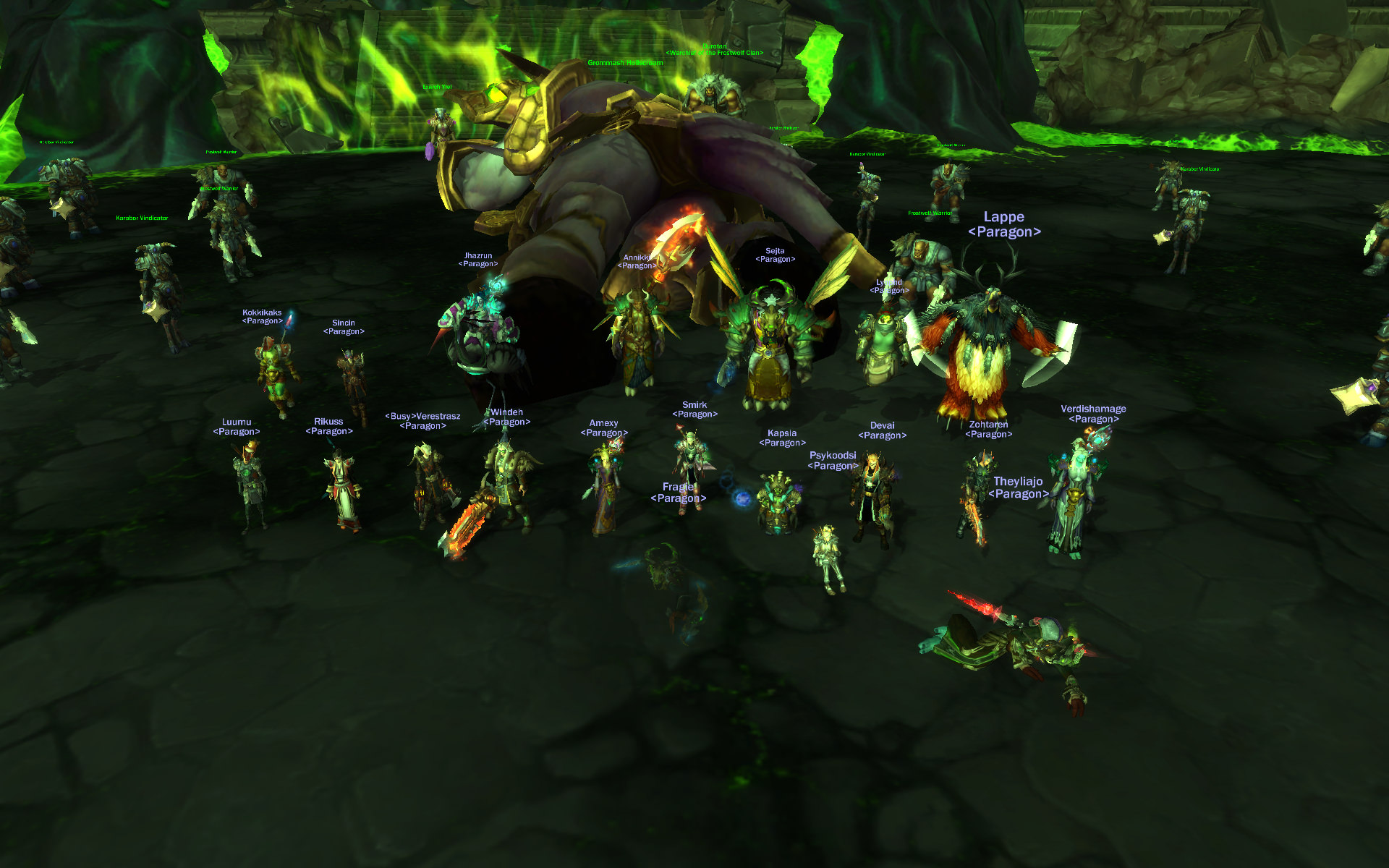 UPDATE - Jul 17 01:18 CET by Starym More 11/13s and we already have a complete top 20 on them - set sail for fail rounding out the rankings, followed by ScrubBusters and KeaHoarl, who also go the Asian 5th on Tyrant Velhari.

UPDATE - Jul 16 19:52 CET by Starym And we have the nerdscreams from the Method Archimonde kill!

UPDATE - Jul 16 18:21 CET by Starym So, it was Method after all, huge GZ. We'll be doing our usual interview with the winners so let us know if you have any questions for them in the comments. Make sure to start with #Question or similar so we can easily sort them!

UPDATE - Jul 16 16:50 CET by Kozmo Once again it's Method who are victorious, they are the T18 Champions! Archimonde is no more as they take him down for World First, 13/13. I am really looking forward to seeing the video of this boss after hearing from the likes of Rogerbrown and others that this boss is probably the hardest end boss they've ever fought. He died after 472 Attempts. 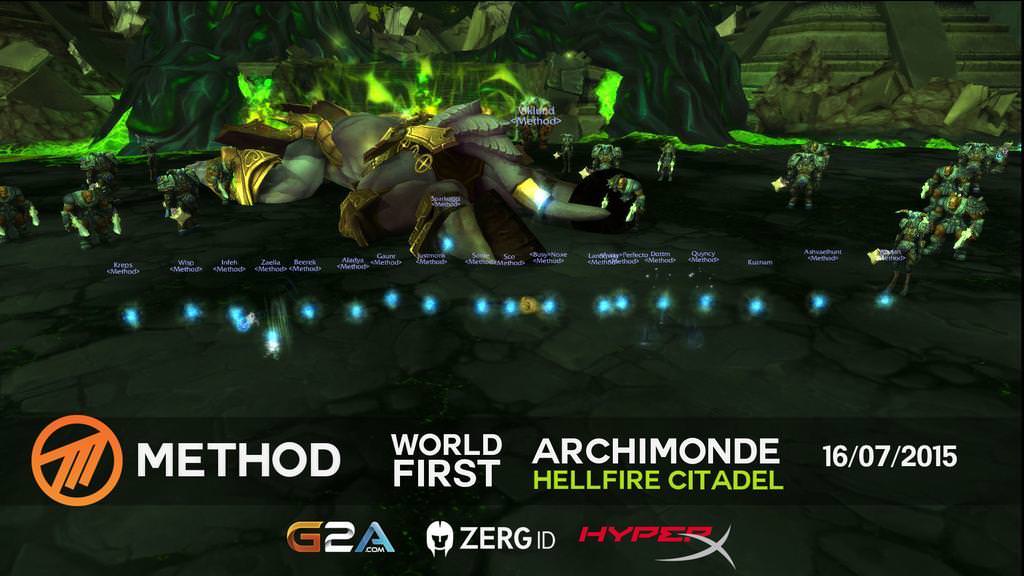 UPDATE - Jul 16 00:03 CET by Starym Day 1 of the EU reset gives us another high profile kill! Rapid Eye Movement get the World 6th, EU 5th on Mannoroth and gain access to Archimonde! 12/13.

UPDATE - Jul 15 23:05 CET by Starym While the extra set of gear and potential rings haven't seemed to loosen Archimonde's grip on his own life they are helping other guilds progress. Danish Terrace move up to 11/13, downing Xhul'horac and setting up in 18th place overall.

UPDATE - Jul 15 06:13 CET by Starym As has become something of a tradition during progress, we have another History of World Firsts edition for you and this time it covers Mists of Pandaria! http://bit.ly/MoP-History-WF

UPDATE - Jul 15 05:10 CET by Starym Archimonde lives! The first endboss of a raid to make it to the third reset since early Cataclysm and Al'akir (not counting Ra-Den and his limited attempts, of course). Maintenance has started in the EU and it's pretty impossible for the Asian guilds to down both Mannoroth and Archimonde for the first time in the next day, so this is it.

Five years since we've last seen a three week race and we also have five guilds at the final boss. Even though it still seems to be a race between Method and Paragon, you shouldn't discount Exorsus, Midwinter or From Scratch, despite the significantly lower amount of time spent on Archimonde. We may have have a serious upset this race, and at least all guilds are now ready to go, the finish line starting at them so close they can feel it.

UPDATE - Jul 14 23:57 CET by Starym It seems the 11s just won't stop today, the reset's got everyone going all in! Nihilum are the next in the 11/13, two more bosses to go club, downing Tyrant Velhari World 20th. Not sure where this puts them in the overall standings since WoWprog still hasn't updated even the Ascendance kill, but I'd guess it'd be at No.17.

UPDATE - Jul 14 18:30 CET by Starym So, here we are in the last day of the EU reset and the only guilds that have a shot at downing Archimonde before the next cycle are going at it. Method, Paragon, Exorsus and From Scratch still have some hours to go before we actually get to see the first raid endboss to surive the second reset since Al'Akir back in Throne of the Four Winds in Cataclysm (we don't count Ra-Den, screw you limited attempts!). So, will they make it in the few hours remaining or is Archimonde going to be the big bad he was back in Warcraft 3 again?