Siegecrafter was demolished and we quickly moved on to Paragons of the Klaxxi, satisfied with our latest triumph and looking forward to tackle a new encounter and figuring out a strategy. But we had a surprise waiting for us, probably what is considered as the most broken encounter in MoP - yes even more broken than Zor'lok. This encounter had a long list of bugs (pun intended) and it was extremely over-tuned. It felt like Blizzard's testing team only spent 30min on this boss and then moved on. It really was a complete disaster and a huge letdown from their end after the awesomeness that was Siegecrafter.

This is also where the Chinese guilds became a problem. I don't wanna get into it completely because there is way too much information to be covered for me to be able to fit it in an article and also lots has been written about this already. But the point is that they are fighting a different encounter over there, a much easier tuned version of every encounter since the scaling of the extra iLvL and loot that they get boosts them a lot more than the boss having 8% extra hp/damage.

Normally this isn't an issue though since we do not consider ourselves competing with them, it's like people in the Olympics aren't competing with the people in the Paralympics because they do not compete under the same conditions. But this time around they were streaming the bosses, and since the bosses were easier they caught up quite quickly. It actually started on Siegecrafter but when they streamed that boss we were so far ahead on him so that we weren't really worried about it, it was just fun to watch them massively fail during breaks.

But now they started to catch up because the Paragons of the Klaxxi encounter was incredibly stupid at the start and we were waiting for a bunch of hotfixes that we reported to Blizzard. They actually showed other EU & US guilds how to deal with the first of the Paragons on their stream and at the same time we had reached as far as we could get without the hotfixes. This meant that our nice head-start that was reduced since the other guilds already knew what to do before they even got there.

So what was actually broken with this encounter? Let's get started, it's a long list but I'll tell you all about it.

When Ka'roz the Locust flew away there was invisible damage that instakilled people and the combatlog just said that you died but not from what. You basically went from 100% -> 0% hp in 0.1 seconds. Nothing was documented in the dungeon journal either. Ka'roz the Locust sometimes decided to randomly switch target and punch someone in the face after throwing Amber or doing Flash . And no, it had nothing to do with threat.

The boss was incredibly over-tuned. They got a 20% stealth buff just before we reached them according to armory. They wanted the enrage timer to be a lot tighter but Blizzard forgot a key part of the fight which is that the Paragons do more damage the longer they are up. So not only did they do more damage, the damage they did scaled a lot more. This lead to you basically getting one-shot by Application of Scorpion + Multishot within the first 2 minutes of the encounter. 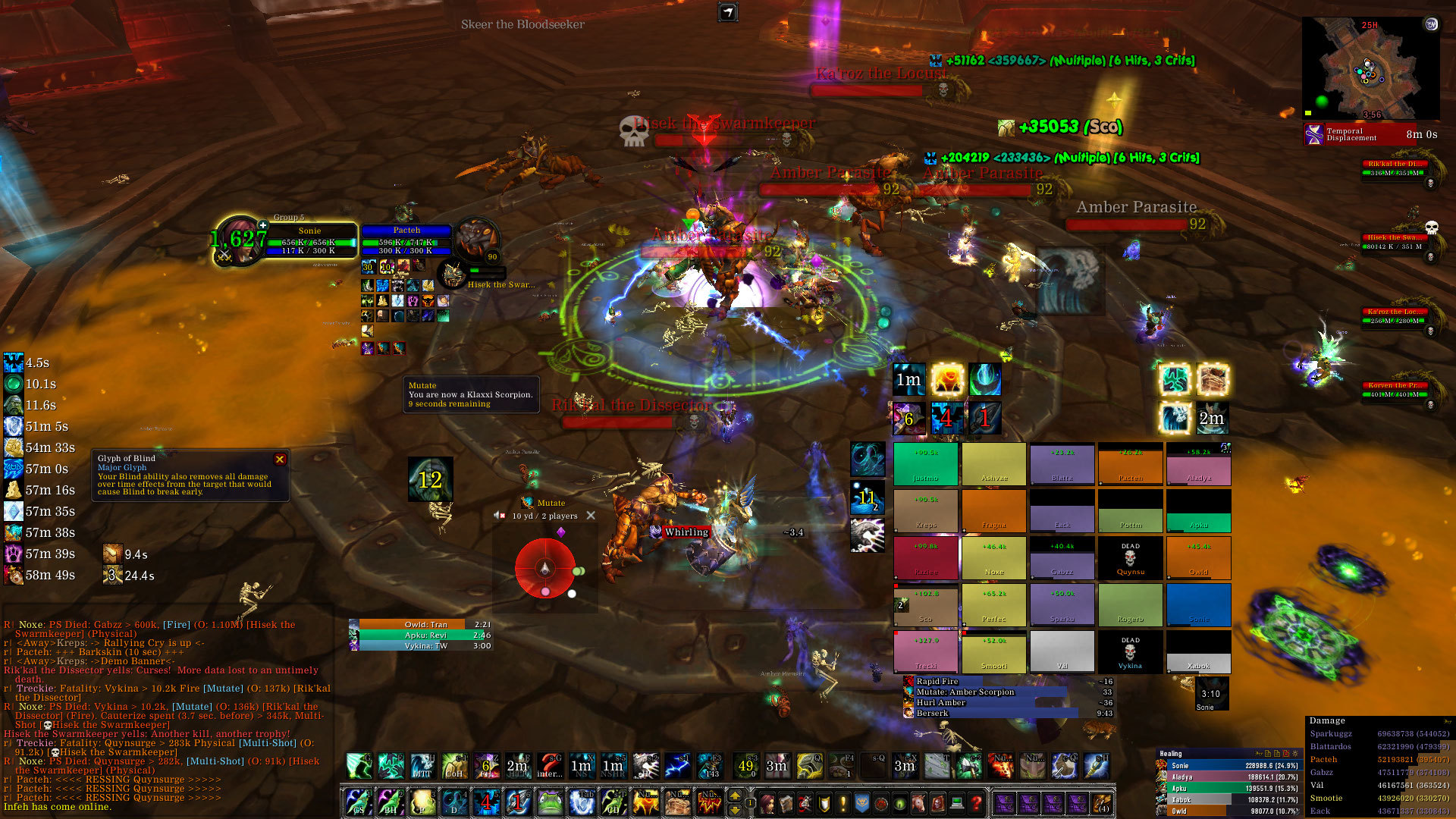 We also found out that a warrior could use Spell Reflect when the Mutation was about to be applied and if the warrior got mutated, Rik'kal the Dissector would turn into a scorpion, and since the boss isn't clever enough to eat 1 Parasite he would instantly die after 14 sec.

Encase in Amber from Korven the Prime interacted extremely weird with all kinds of Hisek the Swarmkeeper attacks resulting in sometimes having Instant Aims that you couldn't react to quick enough and sometimes you stood there waiting to soak it but nothing came.

Probably the most silly bug out of them all: sometimes the encounter completely broke when you wiped. They just stayed up instead of resetting, so you could Mass Ress and continue from the exact point where you wiped. Luckily this got fixed before some scumbags abused this, because this was really a next level exploit.

And finally, Kunchungs weren't always attackable during Kaz'tik the Manipulator which meant that you couldn't free people when they got Mesmerized. 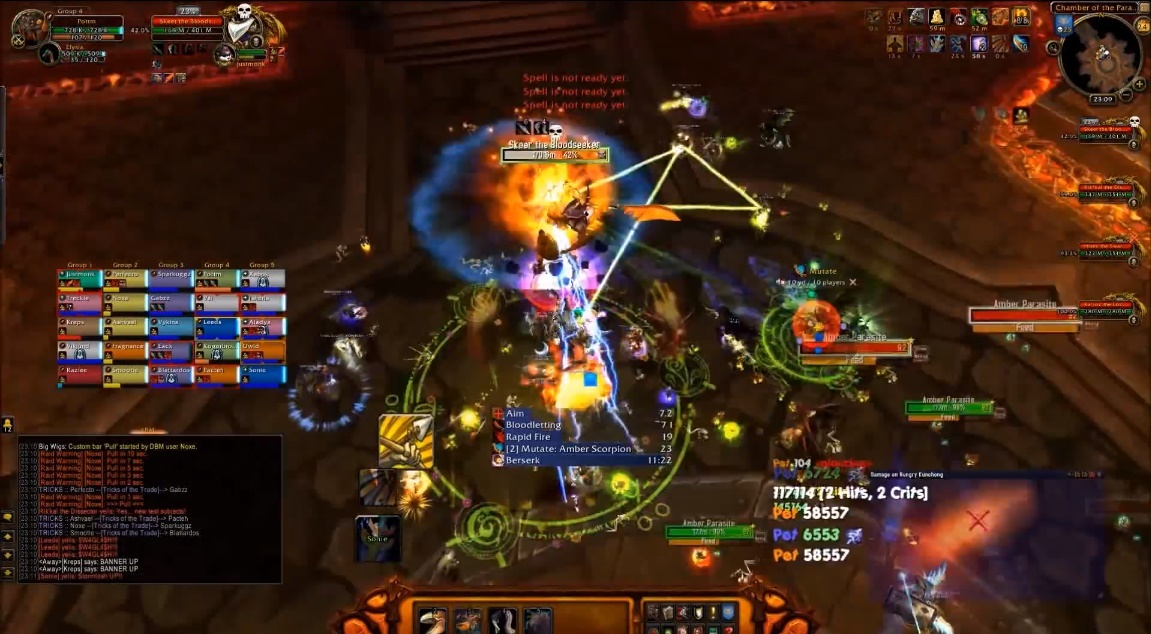 Now that we got the bugs covered, let's move on to the actual progress. We continued on Saturday evening after a nice and earned foodbreak. Our plan for that day was to get as much information as possible about the encounter so that we could sleep on it and think of strategies but sadly we couldn't get very far because of the bugs listed above. This was actually really frustrating since Blood Legion killed Siegecrafter the next day and basically our headstart was completely gone since the fight didn't get fixed until Monday morning. But at least we got to practice the first few bosses a lot and witness a lot of fun insta-gibs.

Our approach to this fight was that we wanted to reduce the amount of damage on the raid, but we also believed that the enrage timer would be extremely tight, which also had an impact on our strategy. And that is also why we decided to kill Korven the Prime before Hisek the Swarmkeeper. We didn't want to have to bait another Encase in Amber and lose even more dps on the enrage timer. This decision lead to more stress on the healers since the Swarmkeeper would be up for a bit longer and most importantly during the first Calculate, so you had to make sure you had that covered with cooldowns. The Multi-Shots really did hurt a lot at that point and you could get pretty much insta-gibbed if you were unlucky with combinations of other abilities. 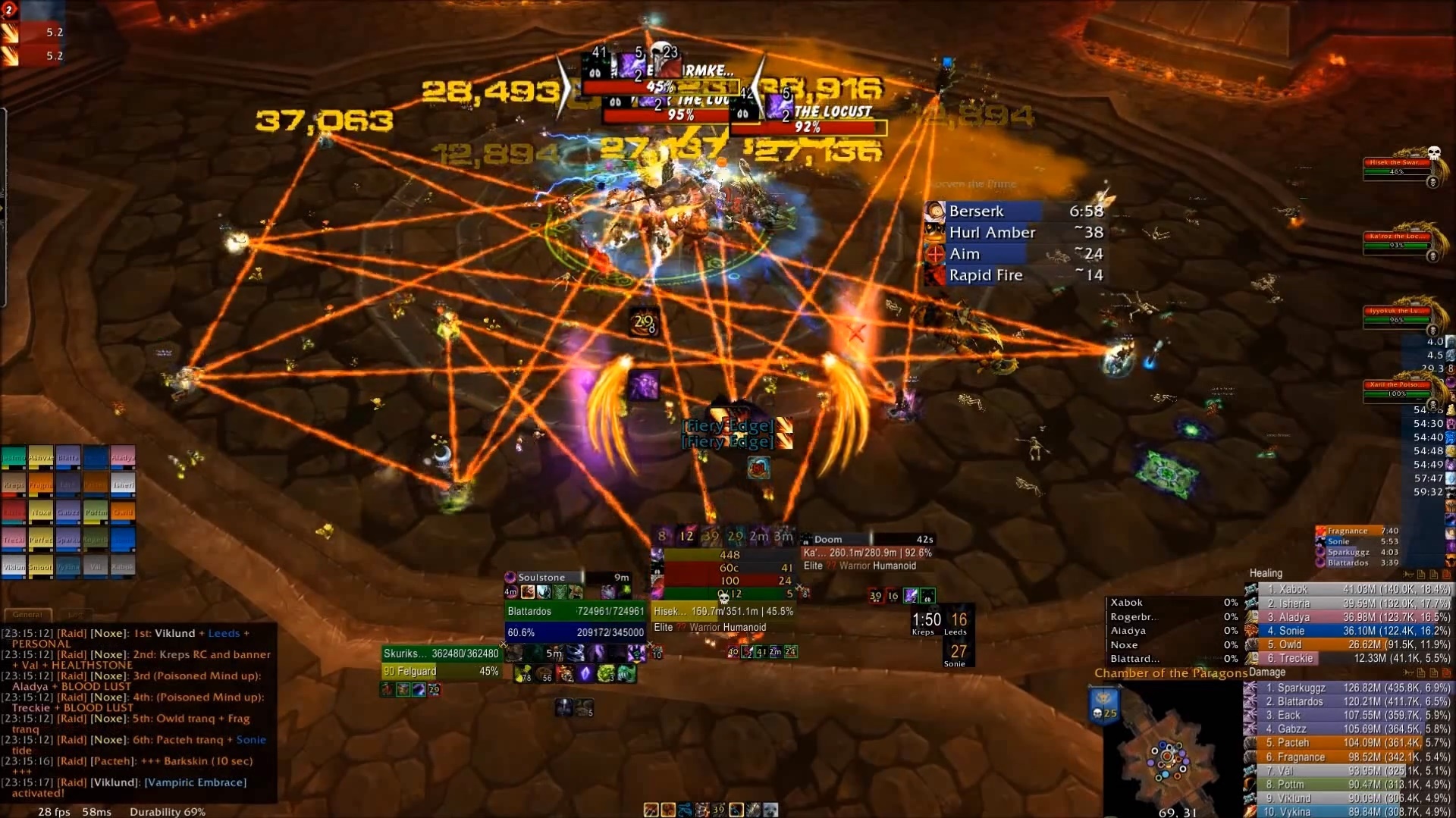 From a healer standpoint and looking beyond how broken the encounter was, I actually enjoyed healing this fight. It was a lot of damage going around and personally I really enjoy the Calculates where you have to make sure that your cooldowns line up and also, of course, it was an amazing feeling to drop a HTT there and see how much healing it did.

Our final strategy ended up being:

I believe this was the best way to do it, at least for the ilvls that we did it in. I know that you could leave Bloodseeker up a bit extra by abusing Hand of Protection on the tanks when he does Bloodletting, which prevented the adds from spawning, but this was an exploit that also got fixed. But our strategy was the best legit one at least!

We managed to kill him on Tuesday evening before our servers went down which was huge since the US servers had already gone down so we were guaranteed to be the only guild that killed Paragons of the Klaxxi in the first week and therefore we managed to get a bit of extra loot and also a few extra hours to practice Garrosh phase 1.

​So we had a sweet head-start for Garrosh by now and morale was extremely high. Everyone was happy and satisfied about the Paragons kill as we moved on to fight the ultimate evil of this expansion, the Warchief himself.