Welcome back to another episode of Method’s journey through HFC Mythic’s. Last week I got the boss order wrong which also got me confused about the addon for Iskar, so I apologize for that. We did indeed do Iskar last out of the three and during our time we spent on the other two, we found out about the Iskar cheese. Additionally I promised to provide an insight about our roster changes going into HFC, and I'll give you a simple and nice overview with the following table.

Anyways, for Xhul’horac and Tyrant Velhari my memory is fresher and I won’t be making any silly mistakes like that.

We had two options here, and it wasn’t that obvious for us which one we should choose. We started out with Xhul’horac and we made decent progress. The first challenge was how to deal with Fel Surges. We started out by dropping them all on the same side, but in quite random positions, which was totally fine until Omnus spawned, when we ended up changing our strategy quite a lot. Non-empowered Chains of Fel was a cake too, the only real difficult part of the encounter at this point was the imps but we were prepared for this with our setup luckily. We ran 3 DKs and 3 Moonkins which means we had a grip + solar beam for each wave which definitely made things a lot easier.

But we still had to sort some additional CCs with stuns and interrupts etc. Not too long after that we managed to reach the point where Omnus spawned which brought Black Holes and Void Surges, and here we definitely ran into some trouble. We were prepared for the Black Holes with our usual rogue schenanigans, but Void Surge turned out to be an issue. Our initial strat was to put Void Surge on the right and Fel Surge on the left, like on Heroic Difficulty. But this caused problems as we quite quickly got overwhelmed. We realized that we didn’t stack the Fel Surges well enough, and the Void Surges were just simply too far away to explode Fel Surges and vice versa. But after brute forcing it a bit we managed to finish off Vanguard and it’s here that the mess started. 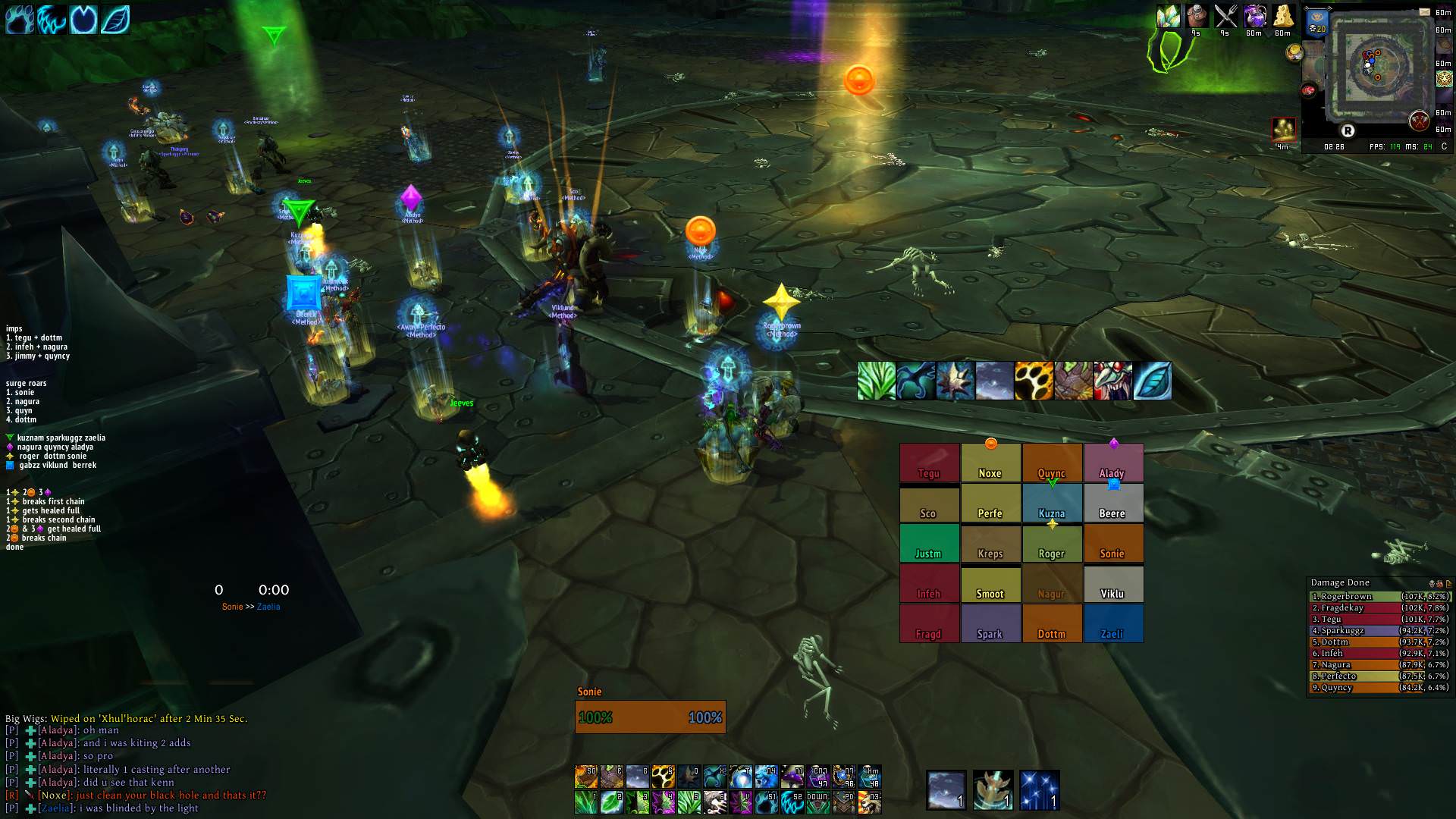 We got destroyed by Empowered Chains of Fel, and we really didn’t have an answer for it. We quite quickly made an assumption that something was wrong with it. An assumption we made too early, without properly testing the ability. We thought everyone got hit by the Fel Snapback twice when the first person broke it, and we just didn’t have enough immunities to cover that.

So we actually decided to go and try out Tyrant Velhari instead, simply because it has happened before when you are the first guild that progresses on an encounter, that some mechanic wasn’t working like it was intended to. And when racing for world first you really can’t risk waiting for stuff like this to be fixed, other guilds would catch up then for sure.

Tyrant Velhari was mechanically a lot simpler. We quickly progressed on this encounter and it didn’t take us that many pulls before we consistently were in phase 2. With the gear we had available it really was a high dps requirement on this one though. We had a few wipes due to interrupts but most of them were because we couldn’t push to phase 3 quickly enough. So we actually ended up trying to go with 3 healers for some time. It was extremely difficult to heal this with 3, but it definitely was doable. We reached phase 3, but it really was too risky to run with 3 healers and the number one rule of progressing is to get consistency, which we didn’t get.

At this point we decided to look over some logs and recordings of Xhul’horac and someone luckily saw that the first person who breaks the chains only got 2 Snapbacks, so you could split the raid into groups around the boss that would stay close to each other and make sure that you had at least 1 person with an immunity in that group to break it first. We went back to Xhul’horac again, reached the Empowered Chains part, and it actually worked! We had a working strategy for it, now it was just about executing it. We decided to have the boss in the middle and 4 groups of ranged around him in each corner of the room. This was also a lot better for us in terms of Fel and Void Surges as we could stack them all up in corners, with Fel and Void always not too far away from each other so that we could cause the explosions to clear the room. We progressed quite quickly at this point and we managed to kill of Omnus as well. 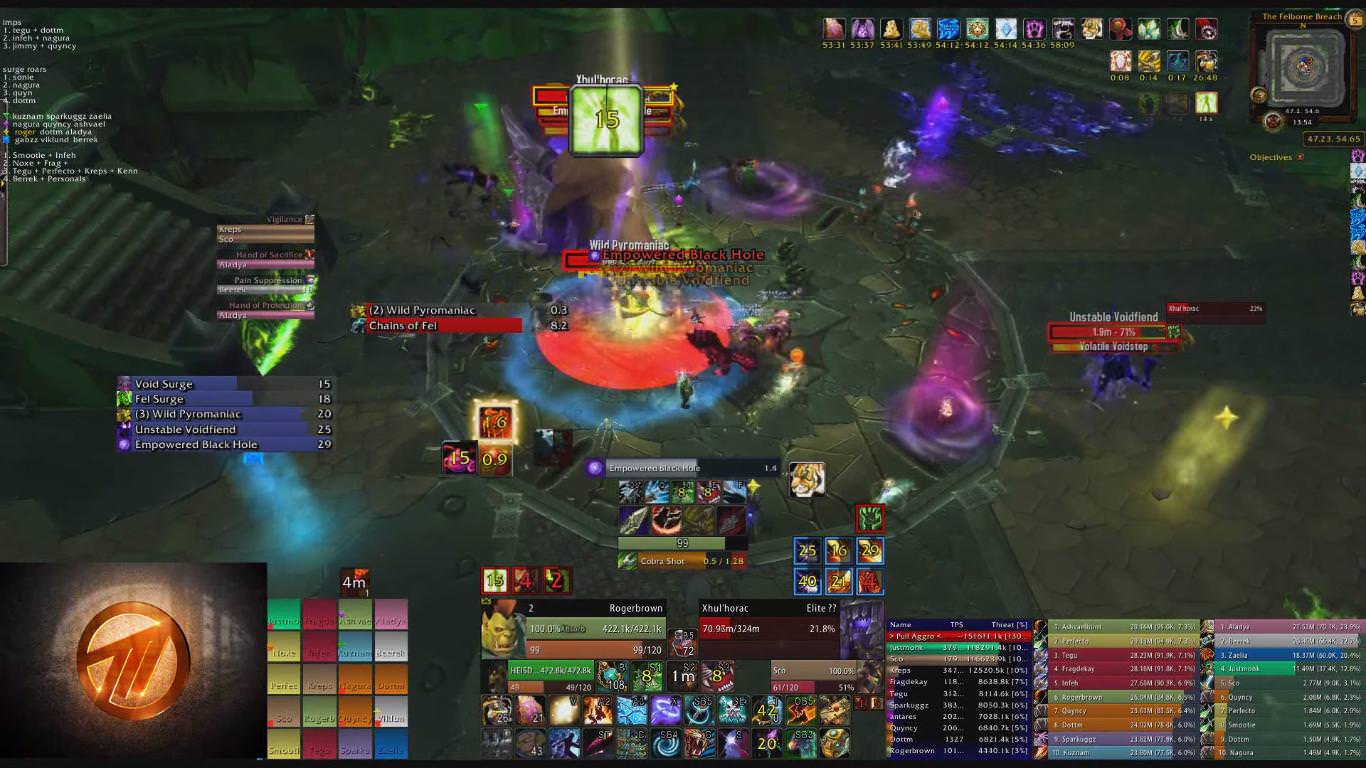 The next challenge turned out to be the Empowered Black Holes. Up until this point we were only running 2 rogues, which wasn’t enough to cover it. So we wanted to get a 3rd rogue in, but felt like we couldn’t afford sitting any dps that we had in at this point as we would maybe fall behind on imps. We discussed and agreed that healing was actually very easy before the last phase, all healers were pretty much dpsing anyways all the time since there wasn’t really much to heal. The best option was definitely to drop a healer and that’s what we did. The only difficult part would be the last phase with 3 healers, but we figured we could power through it with proper cooldown management, which we did.

The difficult part of the last phase was the healing and the Empowered Chains of Fel. We realized that we could bait the Chains on Kuznam by having everyone else stack up in melee and that’s what we did. Kuznam removed it with Ice Block and at this point the boss was almost dead. The second Empowered Chains we decided to not break at all. A few hours later we made the call to drop down to 3 healers, Xhul’horac finally died and it was another sweet World First!

Paragon had already killed Tyrant at this point, so we knew that it was doable and we moved on to her. This time around we decided to go back to 4 healers though as we couldn’t get good enough consistency with 3. Healers had to squeeze a bit of extra damage in phase 2 to make up for the loss of a dps and I ended up dpsing with Heart of the Wild for it’s full duration during Bloodlust which for sure helped. 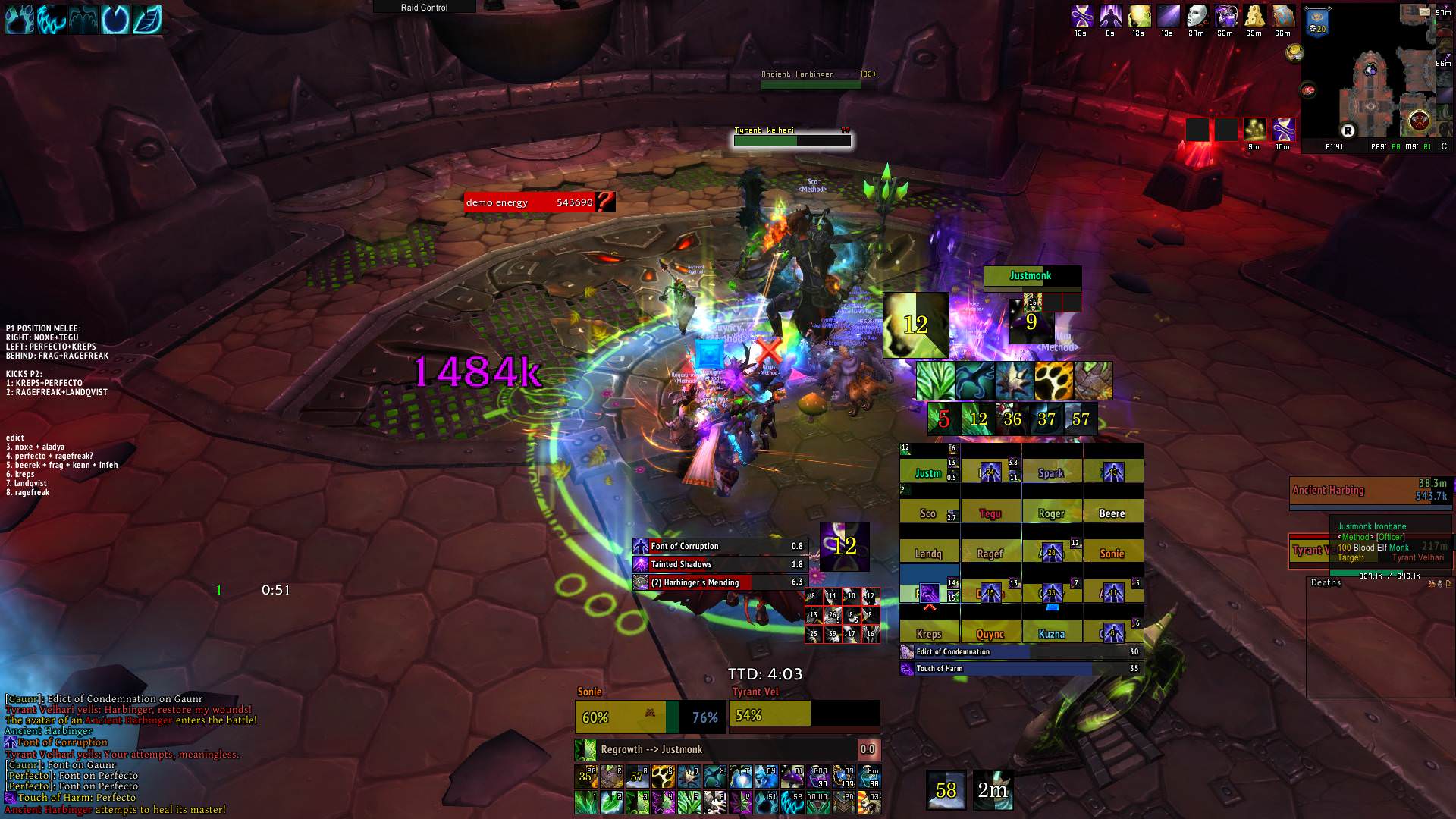 We reached phase 3 again and now we had a lot more healing than  we did previously. We also had a nice strategy with our dps warriors tanking Tyrant while the raid regained % hp. We had to sort some timings and some cooldown management but other than that, it really wasn’t that difficult of a fight for us at this point. 5 hours after we killed Xhul’horac, we killed Tyrant as well, and during this time we also had a food break and cleared the most long and boring trash ever.

Paragon had already killed Xhul’horac as well at this point and we were now even at 11/13M, with no other guild close to us. I can imagine from a viewer perspective that this was exciting, the race was on!