Welcome to another edition of Healing Method, where it's finally time to talk about the most exciting parts of my gaming experience, the actual raiding progression, which  doesn't happen that often, when you actually think about it. The last time was 13 months ago with Siege of Orgrimmar. So for me it's very exciting when I finally get the chance to do it again.

Kargath was supposed to be the Jinrokh and the Immerseus of Highmaul in terms of difficulty, and I definitely believe it lived up to that promise. It was a very simple encounter with few mechanics and things to kill you. The raid damage was also additionally extremely low and gave the healers a false impression that Highmaul would be easy to heal. Personally I believe that the only difficult healing encounter this tier was Imperator, but let's not get ahead of ourselves, more on that later. I guess what I'm trying to say is that Kargath was extremely easy compared to Brackenspore, among others, when it comes to healing. Fairly sure it could be 2 healed, but what's the point in that, except for lols. Extra healers give more room for more fails. We went with 5 healers to play it safe but it was definitely overkill. 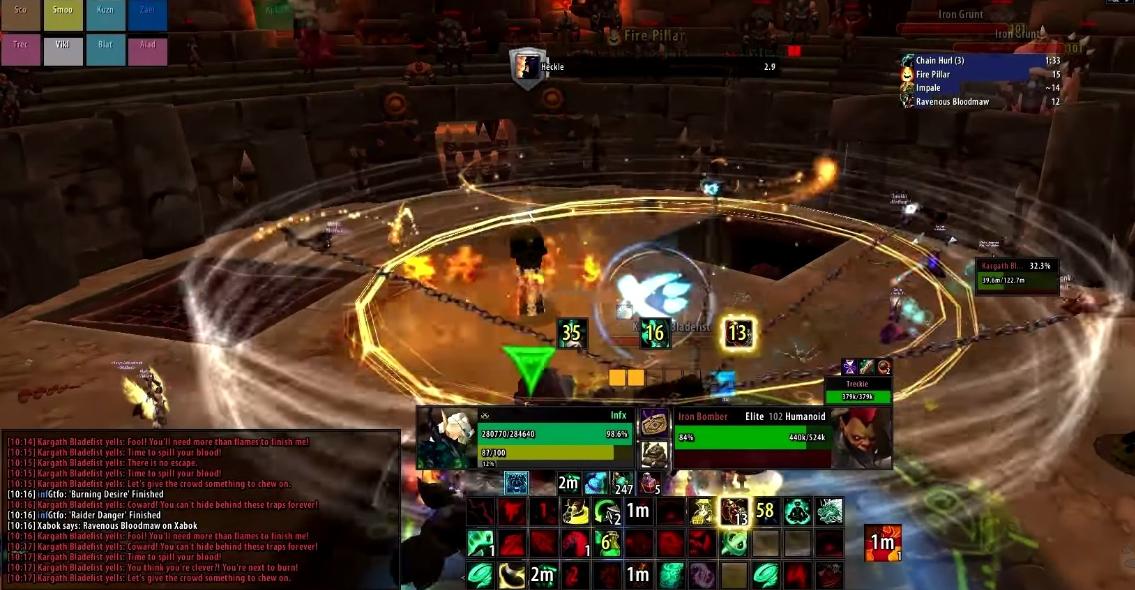 We actually did wipe once on him, /shame. Everyone was overhyped since it was the first pull in Highmaul mythic. Here you have to know the big difference between being hyped and overhyped - when you are hyped you are focused and overhyped its actually the complete opposite, you go complete yolo mode and just wanna start and be done with it.

Twin Ogron is the second easiest boss in Highmaul and I think it's pretty safe to assume that everyone agrees. For healing the same rules applied, there wasn’t that much to think about except spreading out the raid cooldowns for the different high damage moments in the encounter: quakes, enfeebling roar and pulverize. Outside of that it was very relaxing and easy. We went with the standard 5 healer setup here too and wiped once as well, due to people underestimating the importance of trying to avoid the fire.

Brackenspore was our third choice of boss. We performed really well on this encounter on the beta so he felt like a natural choice for us. If it wasn't for the fact that so many US guilds killed Twin Ogron when we were sleeping, he could have been our 2nd choice. As a healer I enjoyed this boss a lot, it was a really fun style of healing: managing raid cooldowns for the Infesting Spore and simultaneously keeping the blue mushrooms up with single target heals and external cooldowns. We started out with 5 healers but quickly realized that dropping to 4 would actually make the fight easier to heal due to Spore Shooters dying quicker. Other than that there wasn't much more to this fight if you had reliable interrupters. Brackenspore quickly fell over and we moved over to Tectus. 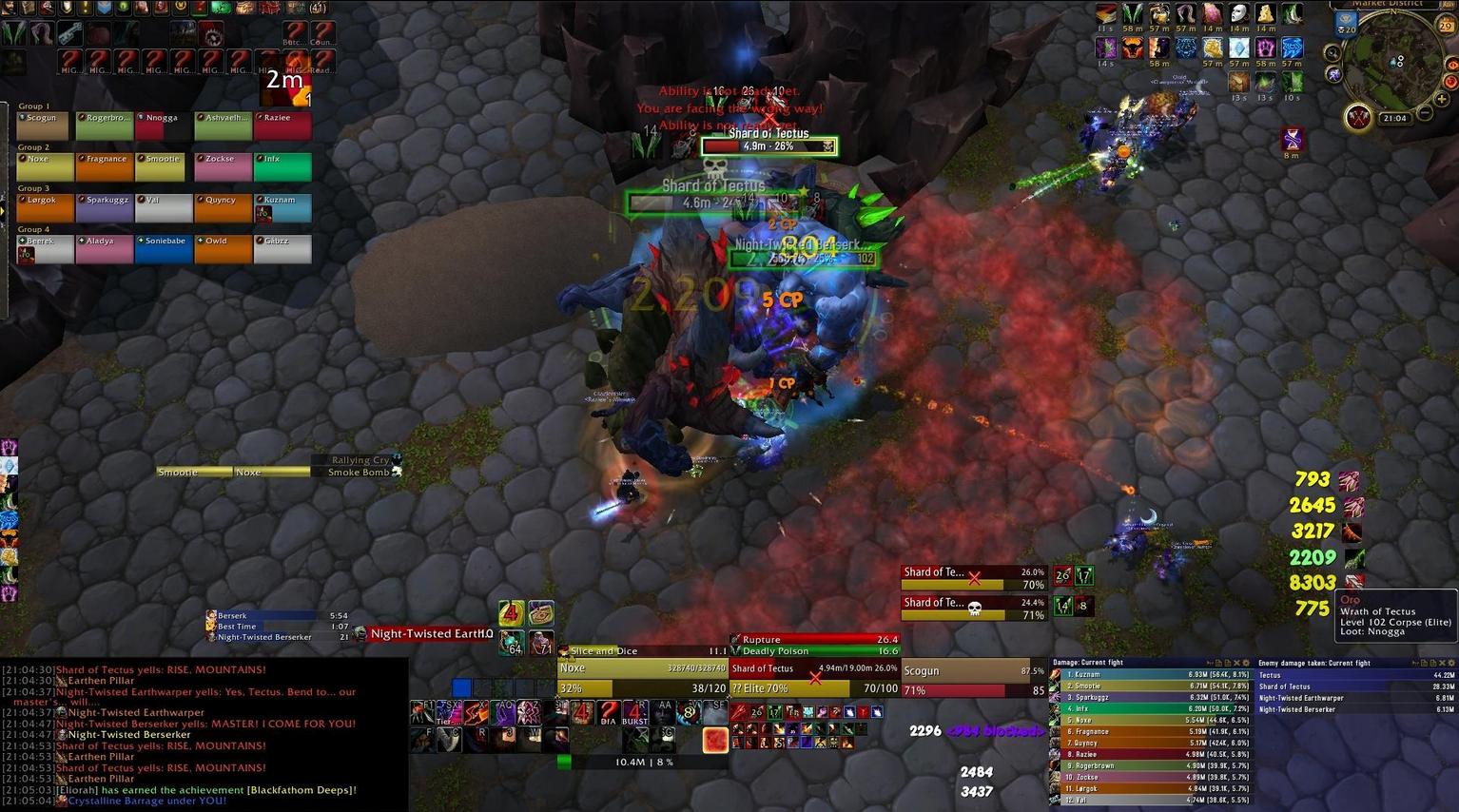 Tectus was about the same difficulty as Brackenspore, and also one of my favorite encounters. A very short fight with burst damage and abilities that required instant reactions and movements. We knew from before that running few healers was the way to go here. It's all about the last phase and there you needed just pure dps to kill the mountains before you ran out of space. On the first pull we really underestimated the damage of the lines, you couldn't even touch them at all so you really had to think where you would kite your line. We knew from beta that it was physical damage for some weird convenient reason, which meant that we could use Hand of Protections for it in the last phase for me, Zaelia and Aladya (we used 3 healers) so we could just stand still and keep tanks up, instead of making a big mess with the lines. After a few pulls in the last phase we managed to bring him down with only a few people left alive.

Next up was Ko'ragh and this is the boss we failed the most on I believe. And me too btw… As a resto druid I preferred mastery over haste. And with the weird way feasts are working, it meant I had to strip down naked with a few mastery pieces equipped only. The problem was that I forgot to equip my gear as we pulled, so I did that pull almost naked. Luckily it wasn't the kill though, but it was pretty funny and I'm sure I'm not the only one who failed with this. (Write a comment if you or somebody you know did this too.) What did we fail on here as a guild? Lack of preparation. When we practiced this encounter we always used hunters to soak the balls. This worked really well in heroic as hunters are easily the most mobile class. However, we didn't think about Mind Control when we prepared for the fight. On mythic we had to switch to casters instead and they had almost zero experience with it so we had to learn from scratch and wasted a lot of time with it. There is so much preparation required to compete in WF race, there's a very big chance you miss small stuff like this which ends up having a big impact. We went with 4 healers here since the dps requirement was quite high in the gear we had. Despite the time we wasted here on just lack of preparation, we managed to bring him down quite quickly and we moved on to Imperator.

We decided to give Imperator a few pulls just to get a taste of the fight and to see how difficult it actually was. Phase 1 wasn't too much trouble and we quite quickly managed to reach the first transition even though it wasn't pretty with traps everywhere. We fixed our phase 1 positioning and could start practicing the transition, but we underestimated the importance of interrupts here and realized quickly that we had to do that flawlessly. It was around this time that we decided to go and kill Butcher quickly instead. We thought that it would be good to have the extra gear from Butcher (if it really was or not is debatable but I don't think it would had changed the outcome).

We'll just save Butcher and Imperator for next time, which will come earlier than usual since I can't really write stuff while also progressing in Foundry. Or eat. Or sleep much.