Another progression tier, another win for DREAM Paragon. They are coming dangerously close to the old Nihilum record for total World Firsts, so I'd like to personally ask them to stop now, kthx. After a really tight progress race it seemed like we might get some serious upsets in this tier, with Method grabbing the first hard boss WF by a solid margin. But, things quickly normalized and Paragon decided that there was enough suspense and uncertaintly in the race and just put it in overdrive, downing the last two bosses. Ragnaros still hasn't been killed by anyone else and it might even be a while before he is, so we caught up with Arx and Zyn from Paragon to see what the mood was like over there, what they thought of the instance and how it all went down. 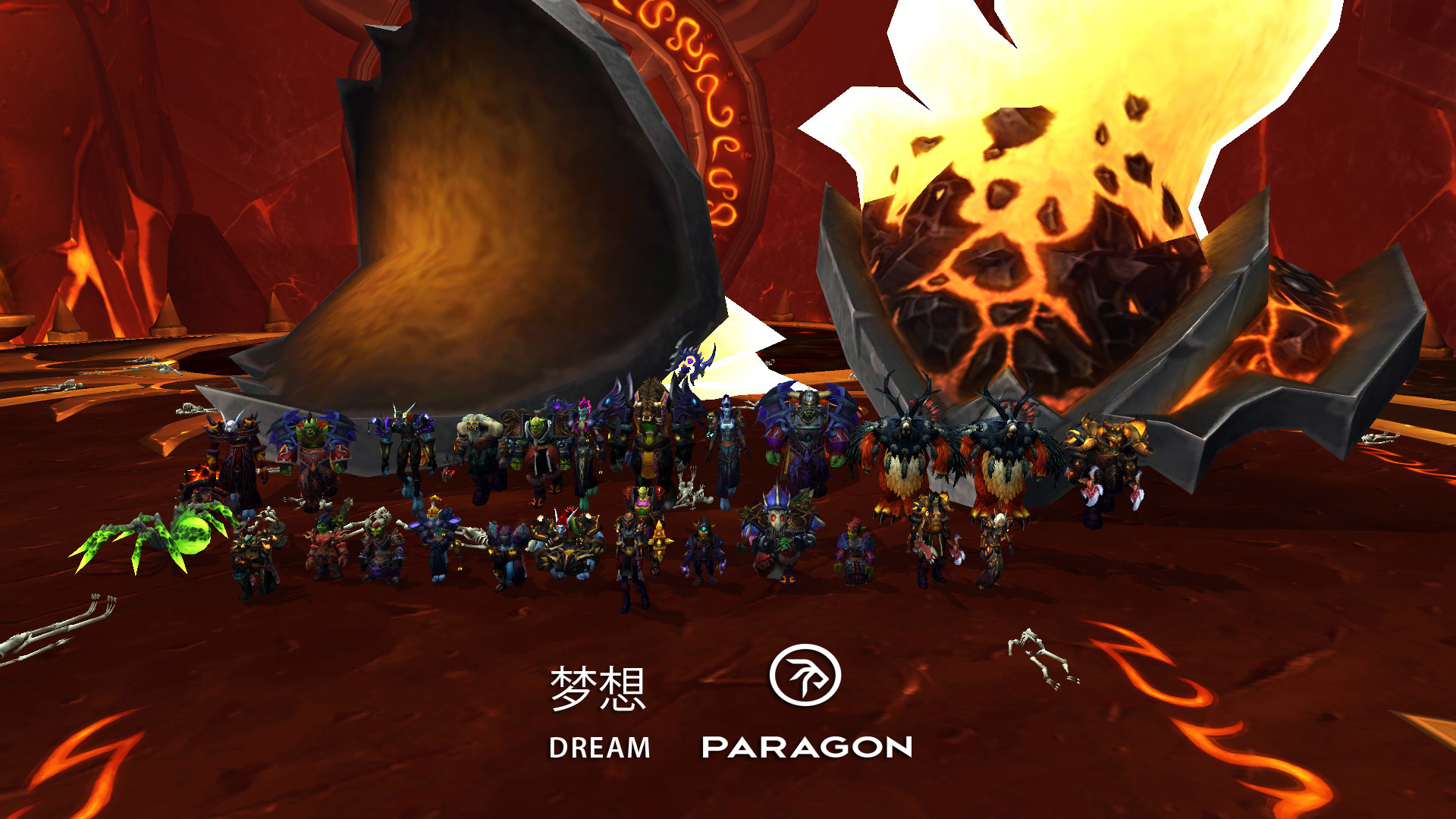 First off, congratulations again on yet another tier of content conquered as the top guild.
Since we aren't going to be hearing nerdsceams for a while until the video (or perhaps not even then), how about doing some now? And since WOOOOOOHOOOOO isn't exactly a "good read" maybe you could instead share some of your feelings/what was going through your head the moment he died.

Zyn: Absolute joy and relief. Only the Lich King kill has felt as good.


Speaking of yet another win in a long series now, did it feel less special? Do you think your enthusiasm for WF kills will ever die down, or is it just always an amazing feeling, no matter what?

Arx: If anything, it almost felt more special to me than anything before. We spent so much effort on the boss, and pulling it off felt amazing. It'll always be like that for bosses like LK and Ragnaros, but I have to admit that killing a filler boss doesn't feel that special anymore. :)

Zyn: Pretty much the same as arx said. The filler bosses I couldn't really care less about anymore. Ragnaros was _the_ most brutal boss I've personally seen and fought. Finally getting the kill was really amazing.


Do you think the underdog in the race, whoever it may be, has a better motivation than the long reigning champion? Having been in both these positions yourselves, was there a difference for you?

Zyn: The way I see it: it has nothing to do with whether or not you're the underdog or whatever else. It's all about the motivation. Other things play a much, much bigger factor in this. 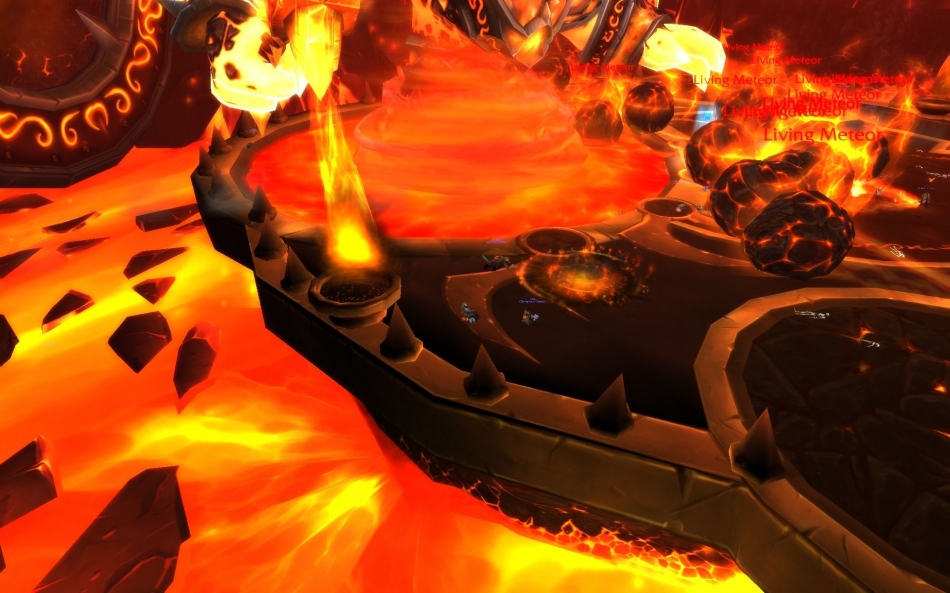 Ragnaros. Obviously the strats and tactics are still top secret, but what can you share about the boss? Clearly he was the hardest of them all in Firelands, but how does he compare to other bosses in general, and specifically to other end bosses like Kel'thuzad, Sinestra, Kil'Jaeden, Illidan  etc.? Do you think the difficulty was properly tuned and hit that sweet spot?

Arx: Since proclaiming your most recent kill "the hardest (possible) boss ever" seems to be a cliché trend nowadays (even if it'd be true!), I'm not gonna do that. Instead I'll just say that we spent considerably more effort on Ragnaros than any other boss before, probably hitting around 500 wipes. By comparison, Yogg-0 took 150-ish wipes, and LK about 170 or so.

Zyn: Well, like arx said, it's probably a cliché, but for me personally it _has_ been the hardest boss. I'm absolutely certain that if we were to face any other boss from the past with no gating, no attempt limits and no bugs with our current raiding team and relatively bad gear for the tier, any of them would have gone down faster


You published the killshot and enterprising fans (stalkers? :D ) can check your armories for who got the Achievement, so what can you say about the class composition there? Was there a large amount of class optimization, or was it just a case of bring the best players?

Arx: We generally see what classes we'd want, what players we have available for those classes, and then go from there. Bring the player and the class?


Were you worried at certain points in the race with the other guilds, Method especially, doing so well and even beating you to some World Firsts? How does that impact your performance, does it encourage you to do better, does the pressure affect people negatively or do you just play on, same as always?

Zyn: Of course things like that add a little bit of extra pressure. Method especially worried me in this tier, it seemed like they really went all out. But that kind of stuff doesn't impact my actual in-game performance in the slightest. In a way I enjoy the fact that there's some really hardcore competition. (As long as we don't lose that is. :D)


To what extent do you monitor what other guilds are doing?

Zyn: Not much, really. I was keeping up with what our guild was doing though. There was this awesome stalker thread on the EU forums. It provided a lot of entertainment during the raids. Scary thing is, the internet detective Lolisa got a lot of things right too. I'm glad we could keep most of our stuff secret though.


How would you rate the whole instance in terms of difficulty, bugs and overall design?

Arx: The first four bosses were a bit of a letdown. Some good ideas, but the numbers weren't always quite there, so they died very fast. By comparison, I think Baleroc would have been very good for an early boss -- simple fight but on-the-spot tuning. Majordomo was ok as well, and I guess at this point my feelings towards Ragnaros might be a bit biased. :P There was a small amount of bugs, but the important ones were hotfixed quite fast. As far as I know, nothing that impacted the WF race -- I doubt anyone properly in the race turtle-tanked Majordomo.

Zyn: Cool ideas and concepts. The first bosses could use some harder number tuning though to accommodate my taste. But I do understand why they're relatively easy. Shannox was probably the biggest letdown though, with how it worked in reality. 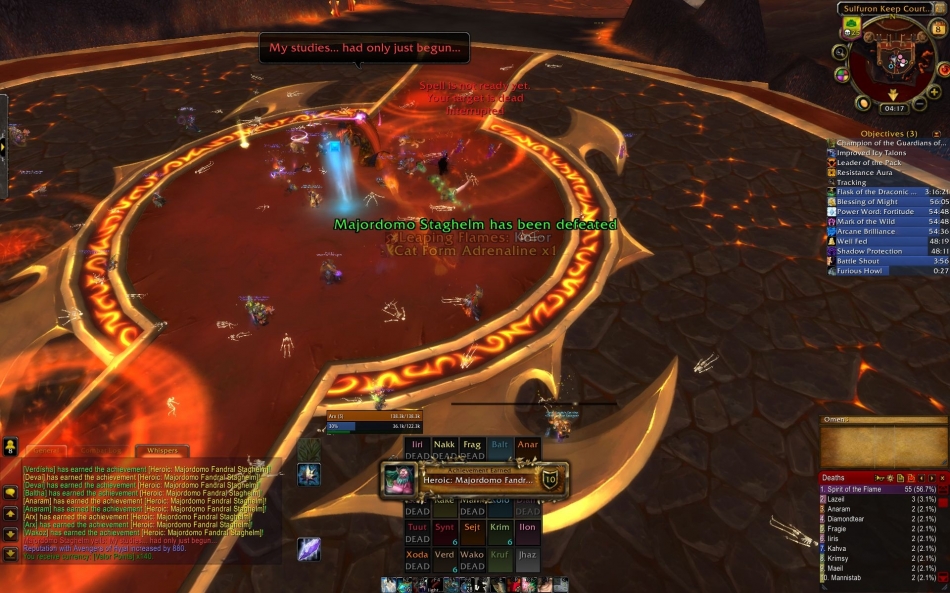 How does this instance compare to the Tier 11 one specifically?

Zyn: Much shorter progress, but that's something I don't mind. Especially now since it came out right in the middle of the really short summer months. Significantly less bugs as well and a much, much more brutal final boss.


What's the most ridiculous strategy you tested?

Zyn: I think we had more than one mage in the group for a while. Everyone knows that mages have 100 IQ which is split between the amount of mages in the raid. It's even worse if they're goblins AND they have engineering - it's a deer in the headlights scenario, they just freeze because there's too many escape abilities. Guaranteed wipe.


What's the funniest whisper you got during progress?

Arx: Just after killing Raggy someone whispered me if I wanted to change girlfriends. That's a first. :D

Zyn: Someone asking if we were recruiting shamans. I fell off my chair and wiped the raid. Oh man, still gives me the chuckles.