Here we are, back in the Core, talking to the central and indispensable raiders from top guilds that form the foundation of their raid progress. This time around it's the No.3 25 man guild's boss, Exorsus paladin Alveona.

Tell us about yourself a bit.

My name is Alexander, I'm 22 years old, living in Moscow and just finished both of my higher education studies. Atm I'm working in the corporate finance industry.

I started playing WoW at the end of Burning Crusade, when the Russian realms were created. Some of my friends from Everquest 2 (the MMO I'd been playing before WoW) suggested I should play it casually with them. When I asked them which class should I choose, they said that paladin is a super fun and interesting class, especially for healing (I hate them for this joke, seriously). During late BC times, when we were progressing in Karazhan and Zul'Aman I was a really bad healer. Why? Well, I had no idea why I was playing this boring class at all and my gold quantity was so low that I'd been socketing green quality gems in my new shiny epics. But when WotLK started, everything changed. I rerolled to retribution spec (which became viable) and we started our semi-hardcore raiding (“Surreal” guild on Thermaplugg). During 3.0 and 3.1 content I was making my first steps toward a GM and RL "career". In the middle of 3.1 I understood that with our current roster and server we had absolutely no chance of getting better results, that's why I wrote applications to the top 3 Russian guilds. Guess what? Every guild rejected my application, so I joined another hardcore guild (top 5 Russian guild “GCD” on Soulflayer). Sadly, after two or three weeks of raiding this guild disbanded due to GM “emo-mode”, so I joined “Exorsus” on the same realm and helped a lot of players from my previous guild join it too, so it was some kind of “mini-merge”. That was my last guild change.  Starting in 3.2 (Crusader's Coliseum) and 'till now I've constantly been playing and improving this guild.

What do you think makes you a good raider, why are you a core part of your guild as a player only?

Speaking of my skill level, I think it's something a bit above average for our guild, nothing exceptional. My main goals as a RL and GM are to organize and keep those super-exceptional players playing cooperatively, avoid dramas and control the recruiting process. That’s why I`m still handy for this guild, in my opinion. :)

As the GM of a top 3 25 man guild how hectic does it get handling all these people, personalities and issues? Do you have to step in to resolve disputes/drama a lot?

It's really hard, believe me. The more exceptional players your guild gets, the more problems and drama you get. Without control and some kind of leader with proper respect it's pretty impossible to rule the guild at all.

Tell us a bit more about what it's like being the GM in Exorsus.

It's tons of time spent on planning, organization, recruiting etc. For example an ordinary raider only needs to know when the next raid or alt-raid will be and that's all. Need to skip this week? Ok, no problem, just write 1 message on the forum.  For a GM (well, RL mostly) it's pretty impossible to skip the raid without a lot of consequences both for the raid and for yourself. That's where officers help you to sort out different things like loot, raid setups (we're running at least 2 main raids + 1 alt raid during farm) and so on. 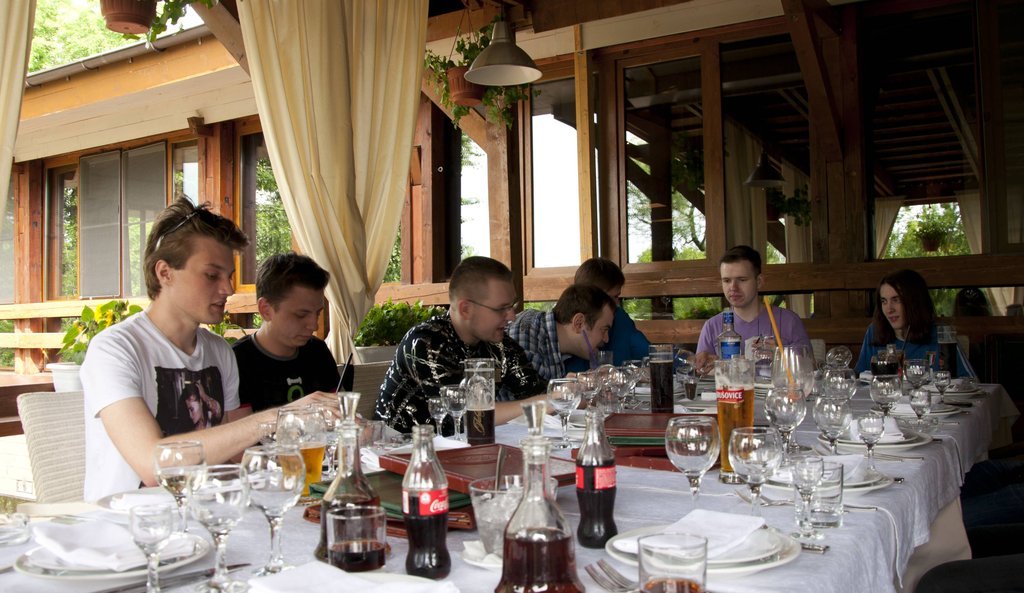 Alveona in the purple-ish shirt

As a GM, do you have any suggestions for players when writing an application to join a top guild?

What do you look for in a player when recruiting, what is that specific thing that makes you think a player might be good just from an application?

Do you also raid lead/come up with the strategies on the bosses?

Yeah, I`m raidleading during progression. The strats part is a tricky one. Every raider takes part during strat discussion, so you need only decide which ideas to choose.

What do you do in WoW when you’re not raiding or farming for raids?

Nothing, gearing up my alts, that’s all.

Are there any other MMOs you play and like/are looking forward to?

RIFT is great, seriously. Non-stop world events in the world is something which definitely should be implemented in WoW (I'm pretty sure everyone remembers the pre-WotLK event and wants more events like this!). Tbh RIFT has tons of great ideas, but the game itself was too hardcore at the beginning, that’s why it was not so popular.
I`m looking forward to “Everquest Next” from SoE and “Titan” from Blizzard (not quite sure that either of these games will be released in the next 3 years lol, probably at least my children will be able to play them!)

What was your favorite moment in WoW?

My first raid in Karazhan. I had no idea what to do and it was really awesome.

What was your favorite boss kill and favorite raid?

Ragnaros and Lei-Shen kills most likely. Favorite raids are Ulduar and Throne of Thunder.

What are the best and worst features of your main class?


What would be the single most important thing about playing your main class well?

Handling our active mitigation system well and using your cooldowns at the proper time.


What makes your guild special, what separates it from the other top guilds?

Apart from being Russian-speaking only? Well, a lot of our players are still raiding only due to a great guild community, not due to high motivation for raiding, that's probably special!

What has been your favorite/least favorite new feature in MoP so far?

How would you rate Throne of Thunder among all the WoW raids so far?

One of the best raid instances along with Ulduar and T11 instances. 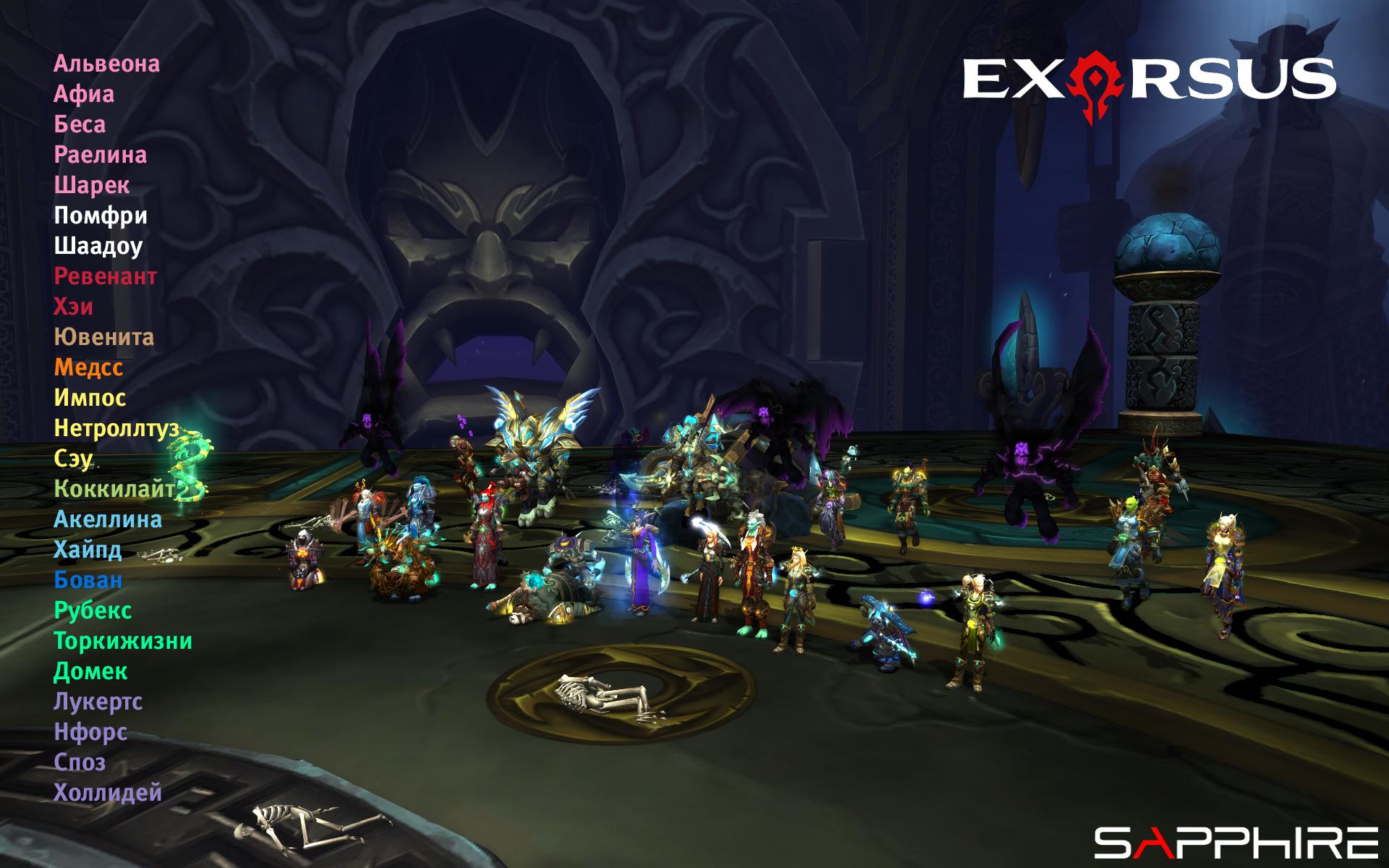 What are your thoughts on the "25 man raiding is dying" discussion, and how would you address the issue?

I don’t want to accept it, but 25 man raiding is dying and in my opinion MoP will be the last addon with a 25 man raiding race. Even now it's only 10 guilds left, competing for the top spots. Recruiting is a pain too now, the main source of new members are disbanded hardcore guilds (multinational guilds got some advantage due to quantity of servers). In my opinion the best way to fix this would be to introduce 15 man raiding instead of 10/25 modes. It would help with a lot of problems, including the testing cycle (2 x less to tune), creating new dungeons (platforms sometimes too small for 25 man and too big for 10 man) and so on. Current “help” for 25 man raiding with thunderforged gear is just a band-aid on dying person, not the medicine to save it. Let’s hope that I’m wrong, but we will see.
Speaking of “save the 25 man” plan – the only thing that can save 25 man is an old WotLK model with different rewards for 10 and 25 man, but Blizzard will never do that sadly.


Would you say raiding (and the game in general) is going in a better direction or not and why?

Hard for me to say. From a casual player side – it's probably going in a better direction.
From a hardcore player side – definitely not. It's harder and harder for a good player to show their advantage over bad players (due to easy and forgiving rotations). Tons of different levels of difficulty (LFR, “Flexible raid”, Normal modes) forcing us to raid them all. Legendary chain quests with random drops with same chance from LFR and Heroic is just plain stupid (a lot of players already got their cloaks, while I'm sitting at 6/12 runestones after 7 weeks). The only thing which is keeping us raiding is cool raid encounter designs. So I can't say Blizzard is doing everything wrong, but some parts definitely should be changed.