As Spine remains unkilled by any other guild in 25 man, so we figured there might be a very small window of time someone over at Kin Raiders might have to talk to us a little about their current lead in the World Rankings, and so we gave it a shot. Thankfully we got lucky and managed to grab one of their players away from Madness of Deathwing tries long enough to answer some questions about the Korean WoW scene, their guild in particular and, of course, the Spine kill itself. This is just a short chat and we'll have a full Raiding Pinnacle with them as soon as they're done with progress. 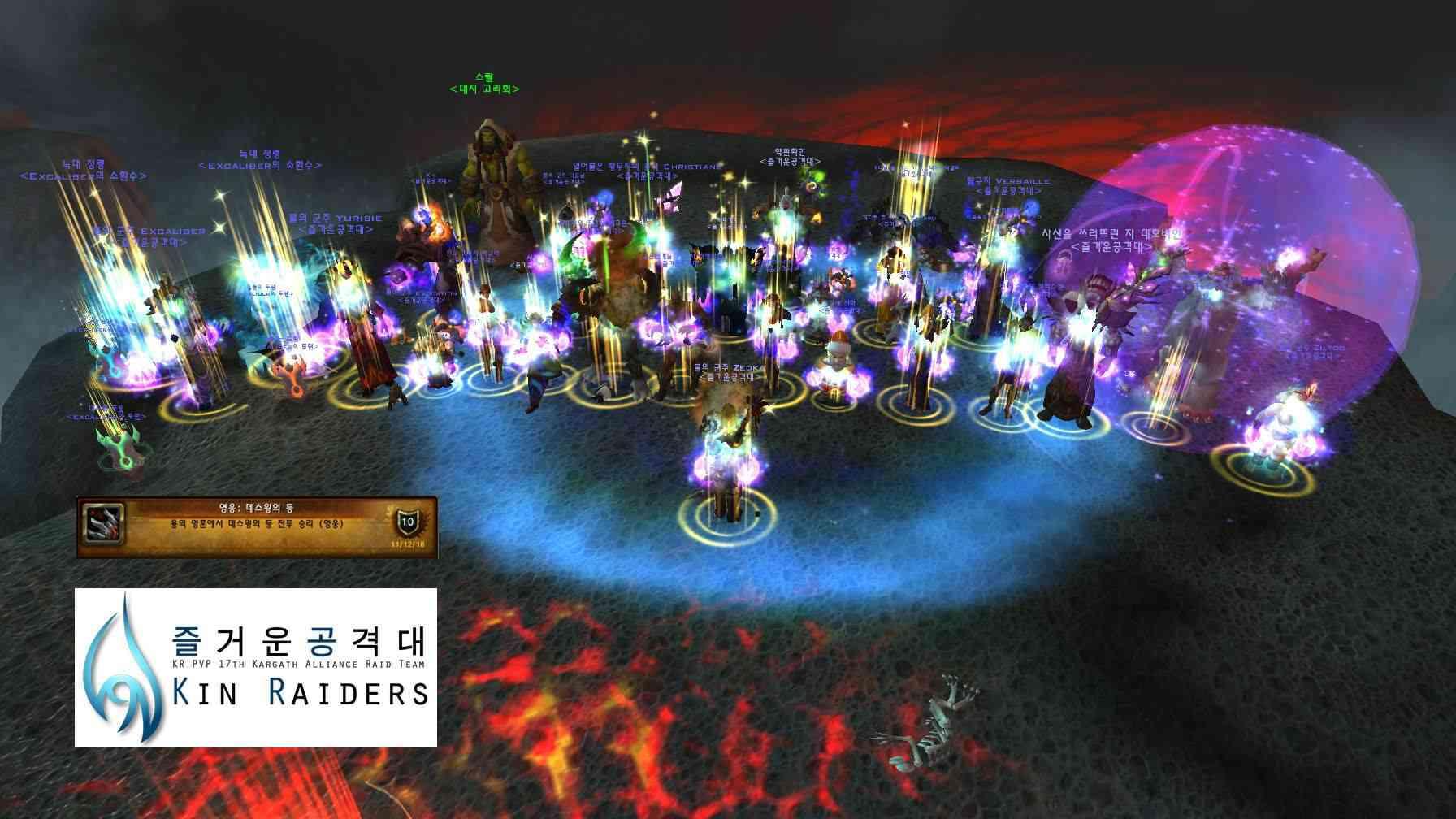 First things first, let's talk about the guild and yourself a little!

Hi there, I'm Excaliber and I play Enhancement Shaman in 즐거운공격대. There are so many things I'd like to talk about concerning my guild, but I think it's best to start with a story about our leader Jjapaghetti (Jjapa). Jjapa plays a Prot Warrior and most of the tactics we play come out of his brain. He made 즐거운공격대 with three of his college mates in Burning Crusade on the Blackmoore (KR) server. At first, his goal was to be realm first, but as the guild got bigger, so did the goal. 즐거운공격대 started to draw Korean users' attention when we achieved 3rd Kil'jaeden kill in Korea. Since Sunwell Plateau, qualified players kept joining the guild and before the gate of Icecrown Citadel, 즐거운공격대 was ready to hit the number one spot in Korea and to probably be among the top world guilds. However, on the first week of Icecrown Heroic, Jjapa suddenly had to leave the guild for personal reasons. 거대괴수곰탱, who became the next leader tried his best to hold the guild together, but the absence of Jjapa hit the guild so hard that more than half of the raid members left. 즐거운공격대 still managed to kill the Lich King in heroic and ranked 9th in Korea, but the guild was clearly in decline.

Then, Jjapa came back to WoW right before Cataclysm. He contacted old raid members, recruited new players, and re-established his leadership in a short amount of time. With its leader back, 즐거운공격대 became the first guild to clear t11 instances in Korea. In tier12, we set our goal to be in the world top 5 and moved to Kargath (KR) to play on a more populated server, but the raid attendance still caused a lot problems at the end of t12. As you know, Ragnaros heroic forced many guilds to use classes with specified abilities: AOE for the 2nd phase and a powerful finishing blow the 3rd phase. We didn't have enough players and classes to optimize the composition and even with much of the tactic already completed, we barely passed the top 10 bar of the t12 race.

For Dragon Soul, I'm confident to tell you that we have the best players ever in the history of 즐거운공격대. Since tier11, 10-man raiding has become extremely popular in Korea and many 25-man raid guilds got disbanded. Qualified players all around Korean servers knocked on 즐거운공격대's door to enjoy the hardcore 25-man raid and to make a grand finale for Cataclysm raids. The World first Spine of Deathwing heroic kill was definitely a great thing to experience as a WoW raider, but we know the real race begins now with so many great raiding guilds all around the world. I'm pretty sure many guilds starting with names like Paragon will figure out an answer to Spine, and we are ready to compete with them. :)

The following is how we did in past raids. I do not know the world ranking for the instances before Cataclysm:


How many active raiders do you have at the moment (fully geared people who are standing by to jump in the main raid)?

We started the tier 13 raid with about 50 people.


Do you only run one main raid that focuses on the first kills or more?

For the heroic instance, we only run one main raid. After we kill a heroic boss, we clear the same boss 2 or 3 more times in normal instances with stand by members and alts to maximize the loots

Have you been using the double resets that were available in Firelands, and for how long?

I do not know the exact date, but the double resets applied on Korean server around the end of October, and yes it somewhat helped us to gear up our members and especially alts.

How many Dragonwraths do you have in the guild?

19 members have Dragonwrath. Four of them joined the guild with Dragonwrath right before patch 4.3. Five of them made Dragonwrath on their on using party channel raid with random ppl. Ten of them could make Dragonwrath via guild raids.


How many alts do each of your raiders have?

About one third of the raiders have none, and the rest have various number of alts ranging from 1 to 10. I myself play seven alts.


Did a significant number of your players get banned due to the LFR exploit or did you manage to avoid that whole thing?


Did you do anything different for this Progress patch than before?

Korean raid guilds always suffer from raid attendance. During tier 11, Paid Character Transfer to Blackmoore (KR) server was locked, and we had to play with only 28 raid members. Many of the tries we had were with less than 24 people. After t11, we transferred to Kargath(KR) and we could secure about 40 to 50 members for Firelands. But as the tries got longer, a lot of members, especially who used to standby more, left the guild, and this became a serious problem when we reached Ragnaros. The number of raid members reduced to 27 again. We basically completed most of the tactics for Ragnaros before Dream Paragon shared their kill-movie, but we simply didn't have enough people to use the tactics in practice. In order to solve this problem, we focused on playing alts as well as recruiting new members. Many of our main members played at least two or three alts in Firelands, and this alt-playing helped us a lot so far in t13. For example, we were forced to play with a certain DPS composition for spine of Deathwing, and I played a Mage instead of my own Enhancement Shaman. 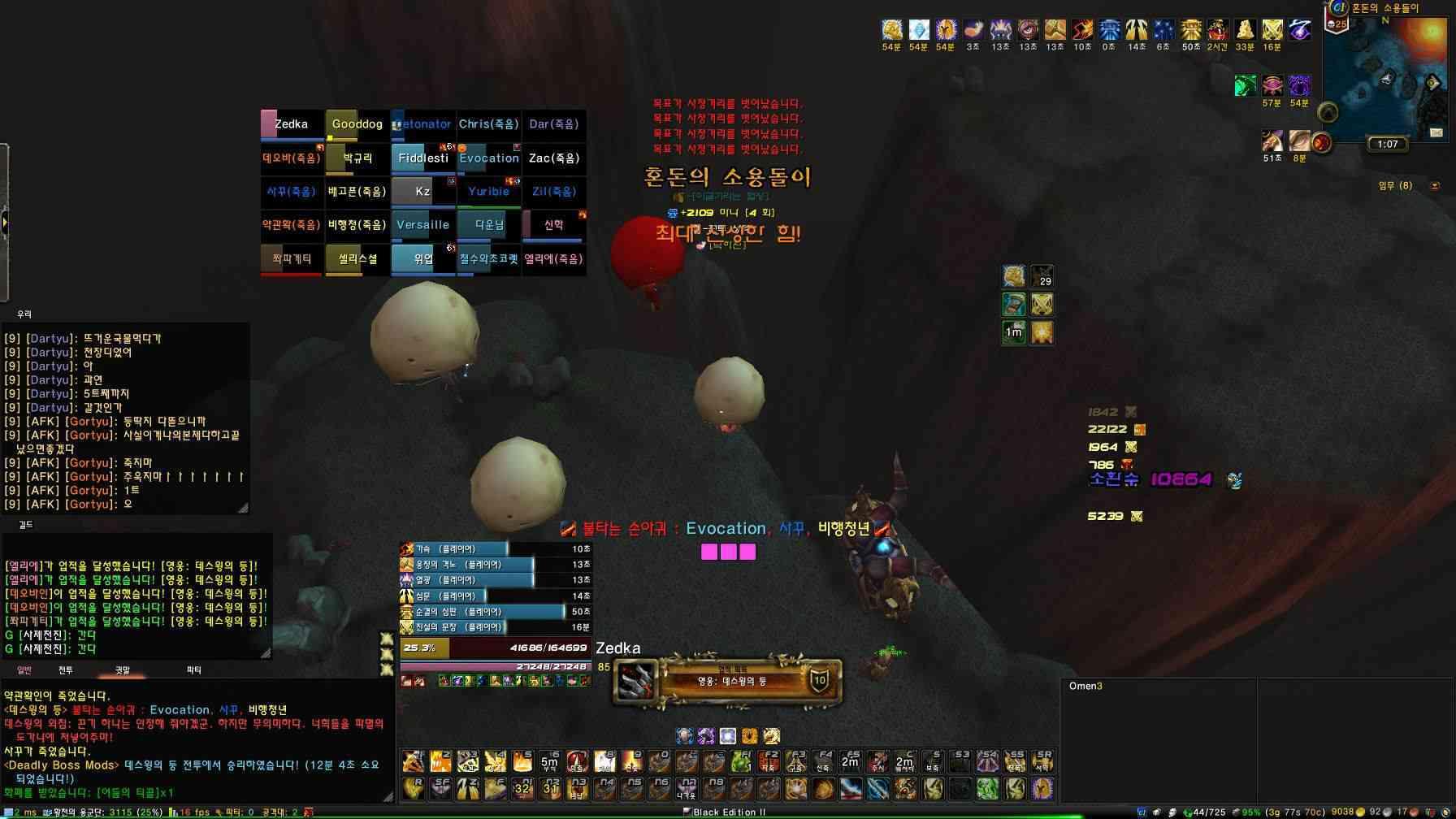 Access to Madness of Deathing after the Spine kill

Take us through the road to the Spine World First.

Everyone knows how good it feels when you down a seemingly impossible boss. At first, burning tendon had about 42 million HP. We started SDW on Dec 10th, and after about a day, we were able to blow one plate off, but everyone was simply drowning in the pool of Corrupted bloods. On top of that, Blood corruption: Earth was not working as intended. A hotfix regarding SDW went into effect on Dec 12 and the health pools of everything on the Spine was reduced. The hotfix mentioned fixing Blood corruption: Earth, but that part wasn't applied until the server maintenance on Thursday. Anyway, we could cut off one more plate before maintenance and we knew what we needed to do. We decided which classes to gear up first and after server maintenance, focused on maximizing loot for those chosen classes

On friday night, we started with SDW again, and this time Blood corruption: Earth was working just fine as intended. From that point on, everything went so smooth. What we had to do was tuning for the last 1% of the tactic. We actually could kill it on Saturday morning, but everyone got so excited and our hands got so shaky whenever we reached the last tendon.

We knew this could be the one and only chance to achieve WFK (even though it's not the last boss) and Dream Paragon was right behind us. Blood legion and Vodka were also two days ahead of us. However, we were confident that we could kill it this week, and as mentioned above, everything was figured out already before the maintenance. I'm very happy that we could kill it first. We were well prepared and did our best for the first kill. Now we face the Madness of Deathwing, and if we can do as we did in SDW, I'm pretty sure we can surprise the world once again.


As WoW players in Korea, do you get some attention, compared to the huge E-sports stars over there, considering how big Starcraft 2 is? Do you think that might change now that you have a World First and potentially a WF Endboss?

We are popular among WoW players, but not like the Starcraft players. There is a professional Starcraft league (E-sports) in Korea, and they are on TV! I don't think WF endboss kill would change much.