Welcome to my short series I'll be producing over the coming weeks attempting to give you guys some real insight into Method as a guild, what its like to progress raid at the top and a break down of what those 2 weeks of progression are really like.

Let's start off with myself. My name's Matt, currently living in Lincoln in the United Kingdom and I'm just finishing my 2nd year of a Business Management degree at University here. I've played computer games since I was young, starting out with Command and Conquer: Red Alert and later onto Generals, so obviously my first love is strategy games which is why following the Starcraft scene is something I love to do. Eventually, however, I moved onto playing FPS games; I played Battlefield 2 to some success, playing for the national team as well as winning UK Lan events under Team Coolermaster and Epsilon Esports. Sadly however, the game died and after a short spree playing Counter Strike, I decided to take the easy life and play World of Warcraft. So I started playing in Wrath, quickly managed to join a half decent raiding guild and ended up scoring a world 60th kill on Lich King Heroic with Flare EU playing mage. My competitive nature wasn't content with that and so I pushed to get higher, I sent applications to every top guild and, luckily for me, I landed a trial in Ensidia after a few vouches from current members. I then played with them throughout Cataclysm, rerolling to play Balance druid. After the dismantling of Ensidia throughout Cataclysm I finally left before the Envy/Ensidia merge and joined Method where I have been since the end of Cataclysm.

Alright then, let's start with the build up to this Tier. The middle tier of an expansion is usually going to be the best designed/largest if you look at the history of the last 2 expansions - Ulduar and Firelands both without a doubt the finest raids of their expansions - and this was hopefully going to shape up to be the same. The guild as a whole was obviously super pumped after coming out with a world 1st on Sha of Fear but the roster still had plenty of room for improvement. Over the weeks of farm and moving into PTR testing of Throne we lost only a small handful of players, Enderox, Zkall, Accents, Yata, Barrelroll and Owld.

However, the roster gained some real quality heading into Tier 15: the addition of Lorgok and the return of Imsupersdw meant that the ranged team was looking even more solid than ever, and, of course, Team Orange/Team Saurus was born as the most insane boomkin team to grace the game.

In addition to this we gained Kreps, Ashvael, Anduryon, Rusty and Daniie, making our melee team even more flexible going into Throne. Most importantly, however, we needed a replacement for the baguette lover Owld. We managed to gain Sonie from Envy which made sure our healing roster was as strong as ever. As a whole we were feeling very confident, much like we were heading into MoP, we didn't want any repeats of Grand Empress though, and with this roster we were confident once again that it was our race to loose.

The dreaded PTR begins, and as always it starts with the tremendous pain that is 10 Man Normal Mode testing. The previous progress was staggered but still pretty intense and it wasn't that long ago, literally no one wanted to be there for 10man testing. As you can imagine for a 25man guild, 10man testing consists of running at least 3 or 4 10man's, spreading the roster pretty thin especially when you're needing 2 tanks, 3 healers for each group - suddenly you need to find 8 tanks and 12 healers. Some take PTR attendance more seriously than others and that can be a small issue. *Cough* Scott.

So, of course, desperate times call for desperate measures. When your 10man is getting tanked by Pactztank, a pre-made paladin with which I had about 10 minutes tanking experience, your 10man is probably in for a bad time. I just thought I might as well treat it like I treat playing boomkin, If i see a red name plate I'll Sunfire it. In this case it was taunt instead of Sunfire and I had to remember to buff Righteous Fury - sounded like a flawless strategy. You would hope you could have an experienced veteran tanking alongside me to help, sadly it goes from bad to worse when you have Mcbaguette as your off tank. I don't remember much of this Tortos testing, but it wasn't pretty. 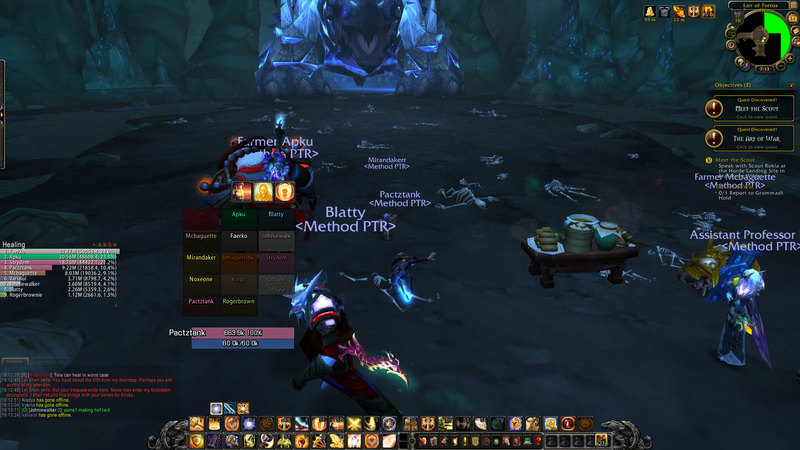 So we're all bored of 10man's, but of course the fun continues as we begin Heroic testing. This time we can't spread the raids so much but still try and field a strong 3 of them. The same issues again pop up, but this time on the healing front - when I bust out the healing spec you know it's getting serious. Sco and Treckie never felt in such safe hands as when getting healed by the HPS monster Pactjesaurus 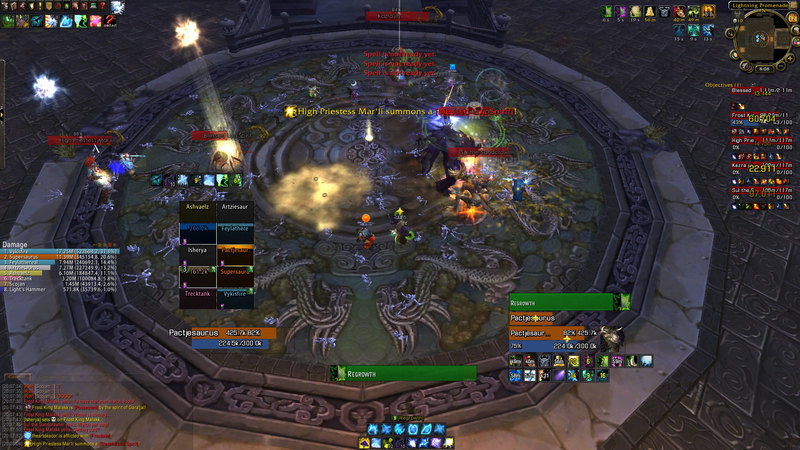 Eventually we arrive to 25man Heroic testing and I can finally play Boomkin for once. Unlike previous PTR testing I've been part of, Throne was pretty smooth, with no major bugs like I've had to play through in the past. If anyone remembers testing Beth'tilac or Rhyolith back in Firelands you'll understand me when I say that sometimes the PTR can just become Blizzard wasting your life. When you're fighting invisible spiders on Beth'tilac for 3 test cycles in a row at 3 am you begin to question why you're playing the game. The only real bugs/flaws I remember was the initial testing of Iron Qon and Twin Consorts. In the original inception of Iron Qon, the lightning debuff mechanic was spreadable by melee which made removing it entirely pretty much impossible. The same sort of melee issues existed on Twins as well, originally the stars would target everyone in the raid almost. Team melee were having a bad time as usual, luckily we got the mechanics changed and ready for live. 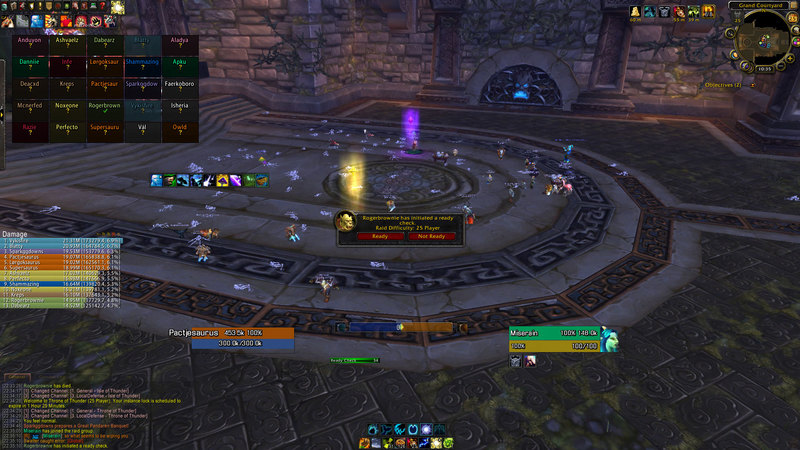 In the next edition I'll be breaking down the 1st week of progression, the preparation, what the bosses are really like, the raiding hours and, of course, the drama. Here's a little taste of how Kuznam prepared for the week ahead, personally I give it a 4/10 for effort.