Outside of the normal class utility that paladin gets, like the Blessings, dispel, and stuns/disorients, there isn’t too much to talk about on the class tree. Below I’ll highlight some of the more important and unique nodes as well as nodes you just shouldn’t take.

Recompense is an incredibly interesting node for raid. It turns Blessing of Sacrifice into a pseudo dps cooldown. You throw it on your co-tank when they are about to get hit by a tank nuke, and your next Judgement or Word of Glory gets empowered based on the amount of damage you prevented. Timed correctly this can do quite a bit of damage.

Of Dusk and Dawn

Of Dusk and Dawn forces you into this unique minigame with your holy power where you want to keep both buffs up as often as possible. Dawn is the more important of the two buffs by far and the one you should try and keep up at all times. With Seal of Order taken you want to try and keep both buffs up as often as you can, and with them lasting 20 seconds now this is much easier to do. However, currently Seal of Order isn’t worth taking over Divine Purpose so you’ll rarely use it.

Sanctified Wrath is by far the most important talent on the class tree for Protection. The increase in Avenging Wrath duration as well as the extra holy power added onto Judgement really bolsters your holy power economy and allows you to keep 100% uptime on Shield of the Righteous. This talent alone makes Avenging Wrath incredibly strong and one of our best survival cooldowns.

A rework of the The Mad Paragon Shadowlands legendary, this talent is much stronger than its previous version. The new Zealot's Paragon it is not not only a 10% buff to just Hammer of Wrath, but also to Judgement. The Avenging Wrath extension portion of the talent was nerfed a bit, however it now extends with BOTH Hammer of Wrath and Judgement.

Here are some talents you want to avoid at all costs as a Protection Paladin. They either are inferior to other options, are too far out of the way on the tree to reliably get, or are just bad talents:

Before we get into the complete builds, let’s go over some of the more important talents and new additions to the spec found on the Protection spec tree.

Blessed Hammer is the goto pick over Hammer of the Righteous simply because it has 3 charges and thus gives more holy power. Not requiring a target is a bonus as it allows you to build holy power outside of combat so you can go into combat with 3 holy power for a Shield of the Righteous.

After Blizzard reworked how the game handles blocking spells, Holy Shield was driven into a flux. It went from one of Protection’s most important survival tools against magic to one of its worst. Fortunately, there have been many tuning and rework passes since then and the talent is now nearly back to its former glory.

Shining Light has been buffed from its Shadowlands version to only require 3 Shield of the Righteous to grant the free Word of Glory. This change was made with our reduced holy power economy in mind and was an incredibly good change. Having access to a free Word of Glory more often is an incredible survival increase.

These three talents now form the backbone of Protection Paladin. The extra charge of Judgement and the cooldown reduction it gains from Grand Crusader is what allows us to generate enough holy power outside of Avenging Wrath to keep 100% uptime on Shield of the Righteous. Without these three talents the spec completely falls apart.

This choice node is a very very strong one. Avenging Wrath: Might is a HUGE dps increase and will be your default choice for nearly all content. Sentinel is an incredible defensive cooldown. The stamina increase and damage reduction it provides along with the extension on it you get from Sanctified Wrath and Zealot’s Paragon are incredibly synergistic. Unfortunately, Protection now has a ton of other defensive cooldowns that are just as strong and do not come at a huge dps loss, so Sentinel is unnecessary until you get to VERY high key levels in mythic plus.

Bastion of Light has been reworked from its Shadowlands version. It now makes your next 3 Shield of the Righteous or Word of Glory cost no holy power. This is an incredibly strong cooldown, for both damage and defense. It is essentially 12 holy power for free, 3 Shield of the Righteous and 1 free Word of Glory from Shining Light. Bastion of Light helps bridge the gap during periods where we have low holy power generation, like outside of Avenging Wrath.

Eye of Tyr is back! This incredibly strong defensive short cooldown ability is something that Protection Paladin desperately needed. It allows you to keep defensives rolling for a very long time in M+ and gives you something extra in raid.

Gift of the Golden Val’kyr

Divine Toll is here to stay! This ability is a very iconic Paladin spell introduced in Shadowlands, and is one of Protection’s best (and coolest!) abilities. However, it did receive a few substantial nerfs in its new incarnation. Divine Toll still grants you holy power, per target hit, despite the change to Avenger’s Shield. However, the Ringing Clarity conduit is no longer tied with Divine Toll, meaning you won’t get the 3 free extra Avenger’s Shields. We no longer have access to the Mikanikos soulbind capstone, but rather a slightly nerfed version via Quickened Invocations that only gives a flat 15 seconds and deals no damage. Divine Resonance, the covenant and Unity legendary effect for Divine Toll, is still available, but is tied in a choice node with Quickened Invocations. Despite all of these changes, Divine Toll is still a very strong cooldown for Protection. It’s still a free 1-5 Avenger’s Shield, 1-5 holy power, and provides you all of the benefits that a normal Avenger’s Shield would.

Avenger’s Shield has had a lot added to it to compensate for the loss of holy power generation. Below I’ll go over some of these talents that weren’t mentioned above.

This choice node has two very interesting talents tied to Avenger’s Shield. The 2% parry per target hit from Strength in Adversity is very strong, especially in m+ where you can nearly have 100% uptime, and 10% parry is nothing to scoff at.

Crusader’s Resolve is a bit weaker. New applications of the ability do not refresh the duration, but still add a stack up to 3 stacks. This behavior is similar to Ironfur from Guardian Druids. However, with the frequency we cast Avenger’s Shield now, you aren’t really going to have a very high uptime on this debuff, and Strength in Adversity ends up being the better choice.

A very simple ability, Barricade of Faith increases your block chance by 10% for 10 seconds. You’re easily able to keep this up 100% of the time and it’s a decent defensive buff gained from Avenger’s Shield and makes it worth pressing.

Bulwark of Order is the strongest Avenger’s Shield talent defensively. It grants you an absorb for 25/50% of the damage Avenger’s Shield deals, up to 30% of your max health. This really helps filter incoming damage and is a great survival tool.

Tyr’s Enforcer adds a good amount of aoe damage every time Avenger’s Shield hits. This is great damage on a single target and scales very well with the number of targets.

This choice node is an amazing quality of life and damage node. Focused Enmity makes Avenger’s Shield only hit one target, but deal 100% increased damage. This is absolutely incredible for single target encounters in raids. Soaring Shield lets Avenger’s Shield jump to 2 additional targets, making it the goto choice for M+.

Ferren Marcus’s Fervor causes Avenger’s Shield to deal 10/20% increased damage to its primary target. This is an amazing effect when tied with a lot of the other Avenger’s Shield abilities such as Focused Enmity or Bulwark of Order.

Bulwark of Righteous Fury is here to stay! This powerful Shadowlands legendary is coming back in Dragonflight as a talent and is a huge reason to still press Avenger’s Shield. The increase in damage and radius of Shield of the Righteous provided by this talent is incredibly powerful.

The Moment of Glory ability provides you with an absorb for 20% of all damage you deal, increases Avenger’s Shield damage by 20% and reduces its cooldown by 75%, essentially letting you spam Avenger’s Shield while this ability is up. It’s a semi-strong offensive and defensive cooldown, but isn’t worth taking in all scenarios.

I’d like to go over a couple less important talents, but ones that are still worth talking about.

Light of the Titans

Light of the Titans causes your Word of Glory to heal you for a good chunk over 15 seconds. This trickle healing really helps tide you over between Word of Glories and is a very good self healing talent. The bonus of Light of the Titans being increased by 50% while you are affected by a harmful periodic effect is great for both raid and M+

Hand of the Protector

The Hand of the Protector talent is what lets Protection be such a potent off healing spec. With our decreased holy power economy, off healing has become slightly less viable, but the increase in the amount of free Word of Glories we have access to helps mitigate that.

Improved Ardent Defender is an okay ability. Increasing Ardent Defender damage reduction to 30% is nice, but not really needed. Blessing of Spellwarding on the other hand is an incredibly utility spell. You’ll take this a lot of times to help negate certain mechanics in both raid and M+.

Below are some different Protection Builds for raid and M+. 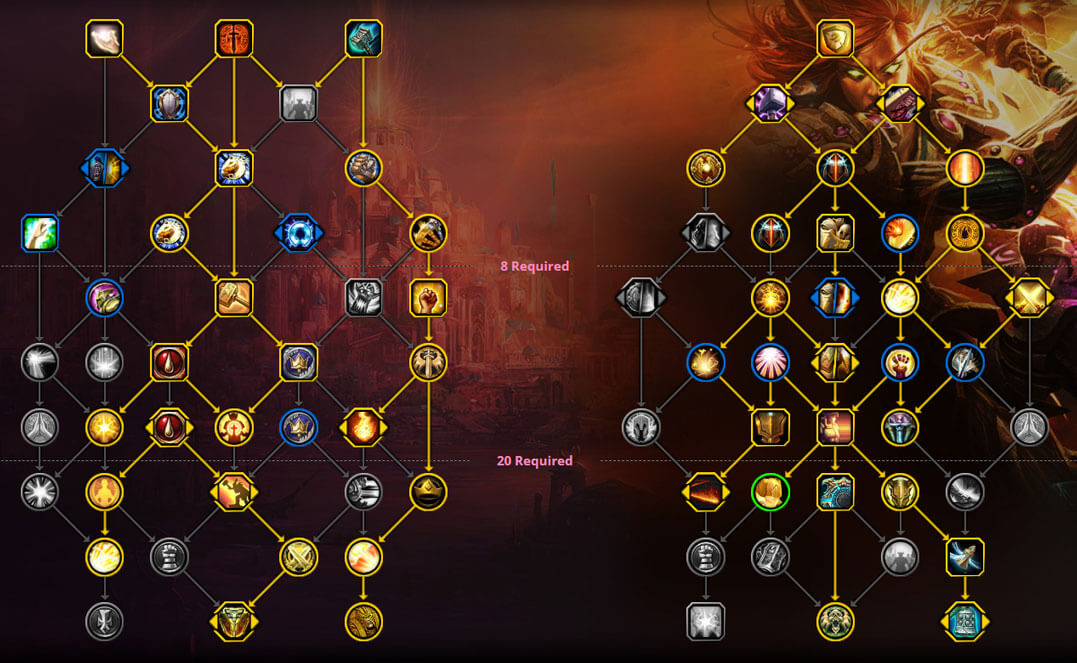 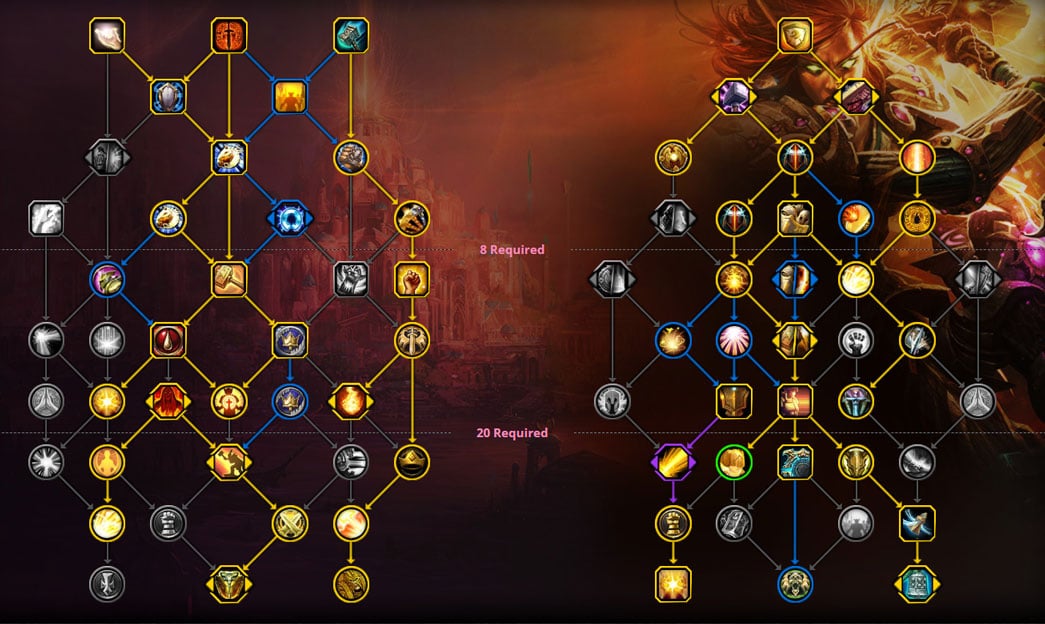 Yellow and green nodes are default, always take talents, green just means 1/2 points. Blue are your flex points. On the class tree you have 3 points to play around with. On the spec tree you have 2-4 points to flex with. The purple node on the spec tree is highlighted because it will change depending on the encounter.