Havoc Demon Hunter’s rotation doesn’t change a lot in AoE situations. It’s mostly the same with the exception of a potential introduction of Glaive Tempest and Fel Barrage into the rotation. It’s mostly just important you don’t waste your burst from Essence Break and Eye Beam and make sure to get proper use of it, by potentially waiting for the next pull (In mythic + scenario) if the current one is about to end. Same goes for Glaive Tempest and Fel Barrage, if the packs are about to be dead. Just be smart about how you use your cooldowns and make sure stuff lines up to achieve the most value.

If you’re playing the Throw Glaive build it’s important to make good use of your glaives and get as much value out of it as possible also making the importance of not overcapping on your stacks of Throw Glaive so much more important to optimize your throughput.

Essence Break and the 40 second burst

Essence Break is a very powerful Talent opening up for a very powerful Burst window for Havoc in both AoE and single target situations. When paired with Metamorphosis which is most commonly gained through Demonic + Eye Beam it makes Blade Dance an incredibly hard hitting ability in the 4 second debuff window and it's important to buff the damage of this short window as much as possible. This is made possible with Initiative which should always be activated right before the cast of Essence Break granting you an additional 25% crit in the burst window.

Additionally you’re gonna see a few builds where you play Inner Demon making your Annihilation after a successful Eye Beam cast summon a demon leaping onto the enemies dealing high AoE damage, however due to Essence Breaks short window you will have to miss out on a proc of Inner Demon to get a double Blade Dance into the Essence Break debuff window.

How to minmax Felrush + Vengeful without downtime

When Casting Felrush and Vengeful Retreat it’s important that you take into account where the cast will end up leaving you. You always want to cast the ability with the thought in mind you want to be in melee range of the Boss’s hitbox to not lose any uptime. It’s also important you don’t make the faulty move of putting yourself in front of the target due to its potential frontal abilities and the fact it can block your attacks.

I would recommend following the green lines in the picture below for the most optimal usage of your movement abilities. 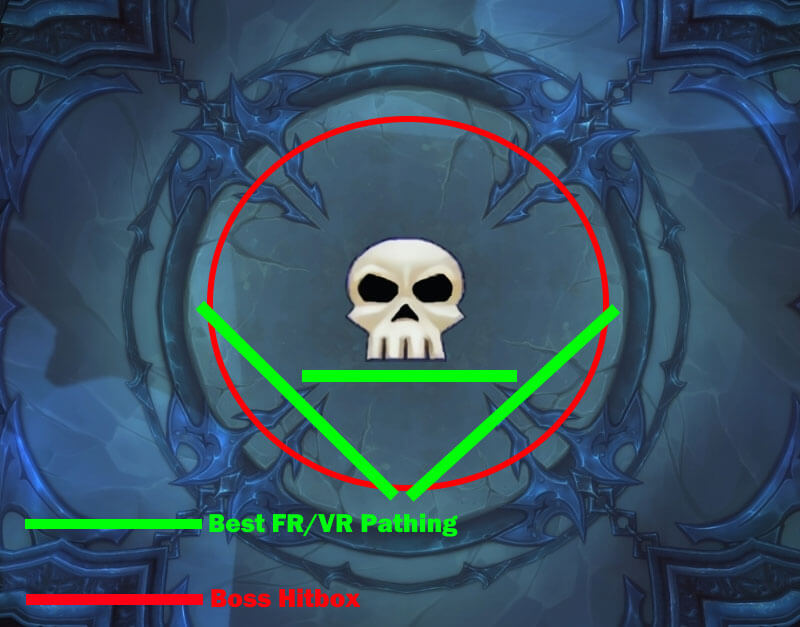 Momentum has become a buff which is possible to keep up for the entire duration of a fight meaning it can have a 100% uptime. It’s very important to keep track of the buff due to its short Cooldown and make sure to use your Momentum activating abilities on CD. However Fel Rush is slightly different due to its low CD and double charges the most important thing is that you never have 2 charges of it.

Havoc Demon Hunter is an immensely tanky Class with its crazy high amounts of self healing through various talents, making it a viable target to receive hits that aren't fatal if need be. Netherwalk is also a crucial ability in the Havoc kit depending on the situation, if there’s ever a need for an immunity, which is a common trope in especially a raiding environment you have the option to pick it, although with a loss to damage its benefits for the raid could very likely out-value it.

Blur is a crazy short Cooldown Defensive so make sure to make good use of it, press it often however always make sure to have it available for the most important situations which would normally prove fatal.