This talent tree will generally fit with any PvE-related content, including raids, mythic+ or open word. All active abilities are pretty much mandatory, but some passive ones can be swapped out for something else, depending on the situation. Let’s say you don’t get much use of Amplify Curse, but if you need some extra Damage Reduction, you can swap it out for Abyss Walker. There is more flexibility within the talent tree, but it will be covered a bit later in the expansion when we have more data. Those changes will be minor and relate primarily to 0.1% of situations, such as the highest M+ possible or mythic raiding in the first few weeks.

Other useful talent points options: Fiendish Stride, abyss walker, banish, sweet souls, darkfury or shadowlame, profane bargain. These talents are pretty straightforward and speak for themselves, so you just pick whatever you feel you are lacking in a specific situation. 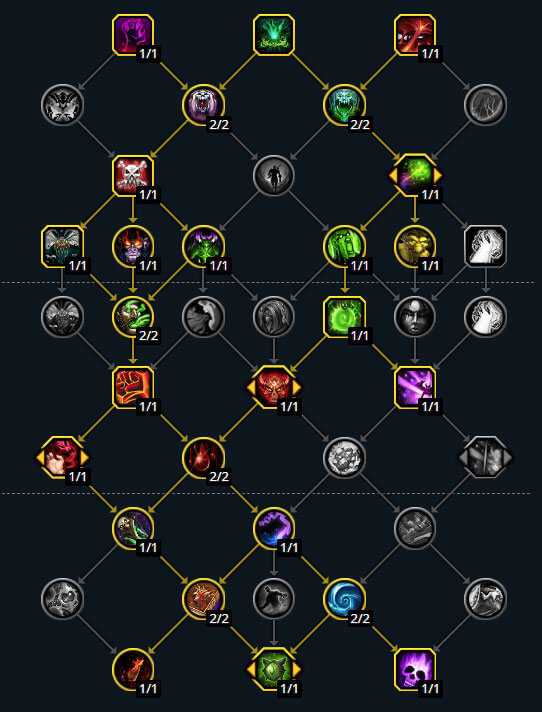 It would work both on 1 and 2 targets fight.

Haunted Soul is the strongest talent overall for ST and other fights.

Dread Touch is currently the 2nd strongest talent for ST. These two talents have good synergy since they amplify our dot damage.

DG branch is currently undertuned and not worth picking on pure single target.

The same goes for the SR branch, which is not strong enough for ST.

TC is a good talent that synergizes greatly with new talent Focused Malignancy but keep in mind that the more hectic the fight is, then more value you would lose from Crescendo since it requires you to cast as many drain souls in free globals as possible.

WoC is a good talent but obviously has no use on ST.

Also not much you can change for sustain AoE/Cleave. If there are more than 5-6 targets, you may want to swap from the Soul Rot branch to Summon Darkglare one with picking Grim Reach.

You can drop 1 point in Sacrolash and pick Xavian for a dungeon like Azure Vault if you want more damage for bosses that spawn a few more adds for Cleave and not AoE like Azureblade or Umbrelskul.

I prefer the DG branch over SR for M+ because it feels better for ST and big mass AoE pulls. But you can also try playing with the SR branch instead, especially if you have smaller pulls more often. Also, if you see that you aren’t making much use of Soulflame, you should pick ID while playing with SR. Build for M+ with smaller pulls would look like this: