As a healer having a good interface where you can keep track of everything that is happening is integral, and this is especially true for someone playing Discipline Priest. Building your dream UI (User Interface) is a puzzle consisting of multiple parts. The most important of these puzzle pieces are your party/raid frames. The bare minimum for these frames are that you are able to track their health at any given time, their current debuffs as well as your Atonement on each party/raid member. Without this information you will be playing in the dark so to speak as discipline, and you will struggle a lot. How you lay out this information on the frames themselves is up to you, as it differs from person to person what is more recognizable. In my humble opinion the current default Blizzard raid frames just don’t cut it in terms of visibility. The add-ons I would recommend to display your raid frames are Grid2 and VuhDo. These two addons do a great job of letting you customize how you would like to lay out your raid/party frames, and I personally use Grid2.

Next is how you want to track incoming raid/dungeon mechanics. There are two options in terms of add-ons here, BigWigs/LittleWigs and DBM (Deadly Boss Mods). These two addons allow you to see timers for upcoming mechanics, as well as display a lot of other useful information that will help you during a raid boss or dungeon encounter. You will want to position the timers somewhere they are easily readable during gameplay, and make sure they are emphasized when they reach a certain time where you can react and ramp for the mechanic in time.

For more advanced raiders you might already be familiar with the add-on MRT (Method Raid Tools) and Notes for raid bosses. In a lot of guilds it is common practice to use Notes in MRT to lay out timings for when certain healing cooldowns should be used. This is incredibly useful for discipline priests as it will set in stone which timings you’ll want to be ramping for so you can get used to completing them on time consistently for mechanics. Moreover in the Weakauras section of this guide I will link a Weakaura that will almost completely streamline timing ramps.

The last part that is crucial for performing well is tracking your own cooldowns. This can be done using the add-on Weakauras and this guide has a dedicated Weakaura section where I will dive a bit deeper into which kind of Weakauras I recommend for the Discipline Priest. To finish off this section let’s take a look at my UI as an example. 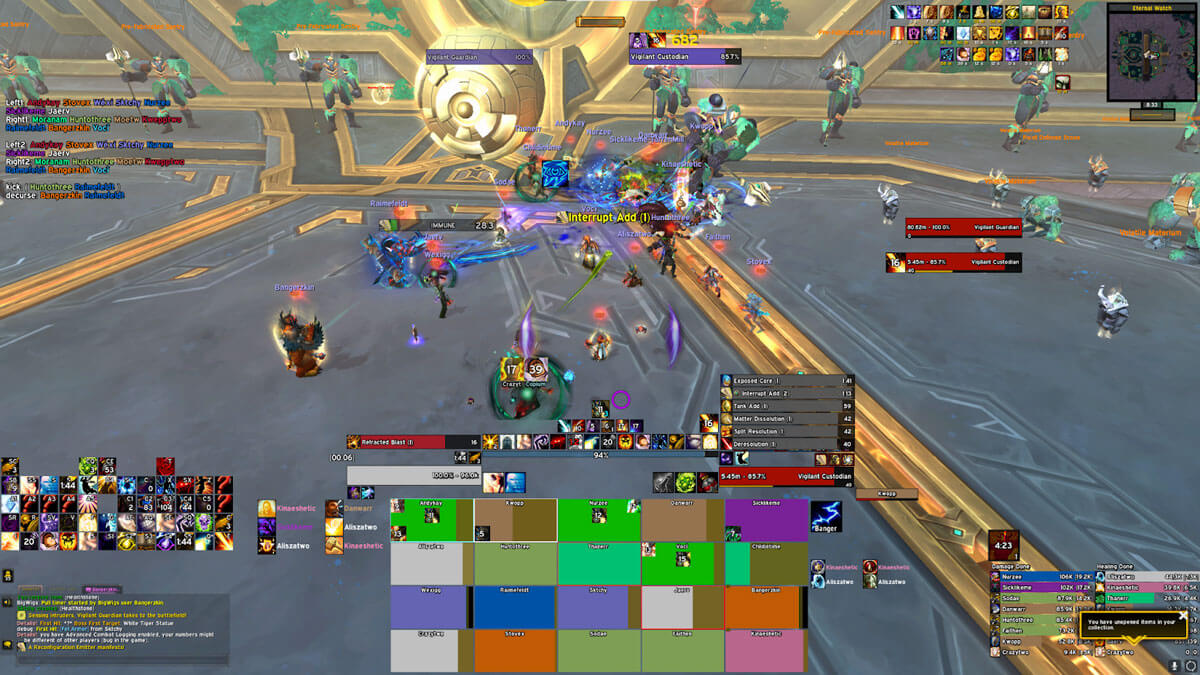 This picture shows what my UI looks like during the raid encounter Vigilant Guardian in Sepulcher of the First Ones. It is a modified version of Atrocity's UI where I made some personal changes and swapped ElvUI for Grid2 and several other add-ons. You can see his UI live over at https://www.twitch.tv/atrocity.

Of course the perfect UI looks very different for everyone, so play with something that you like and what you think works best for you! Experiment, try different addons and setups until you find the one that is perfect for you.

This Angelic Feather player macro places a feather on top of you with one button press.

This Shadow Covenant macro allows you to instantly cast Shadow Covenant on yourself, making it so you don’t have to worry about targeting while casting it during a ramp for example.

You can do any ability as a mouseover. You can replace Leap of Faith with any ability, and it will cast that ability on the target you’re currently hovering your mouse over. I personally have all my friendly targeted abilities as mouseover macros.

Remember to replace “PLAYERNAME” with the name of the player you would like to cast Power Infusion on, or just remove this line entirely if you plan on using it mainly through focus target and mouseovers.

As a Discipline Priest you will mainly focus on using Weakauras to track three different aspects of your class. First and probably most importantly are your own cooldowns. Being able to track your own cooldowns and plan ahead for damage events will determine how much success you will have while playing Discipline Priest. Examples of important cooldowns that should be tracked are Power Word: Radiance, Evangelism, Shadowfiend and Light’s Wrath. Next are your current buffs that interact with your rotation. Being able to track and play around buffs like Twilight Equilibrium and Harsh Discipline are incredibly important to maximize the potency of your kit. Lastly you want to be tracking how many atonements you have out at any given time. Tracking atonement count is more relevant in a raid setting, but still nice to have in dungeons.

Tracking these three aspects of Discipline Priest are really all you need in terms of Weakauras, and you can most likely find Weakauras to track all these as well as anything extra that you yourself feel will help you master the spec on Wago’s amazing public library that you can browse: https://wago.io/weakauras/classes/priest/discipline

An incredibly useful Weakaura is the Kaze ERT Tracker. This Weakaura allows you to use information from an MRT Note to create custom pop-ups for whenever it is time for you to use your healing cooldowns like Evangelism and Power Word: Barrier. The main advantage of using this Weakaura in tandem with MRT Notes is that it makes it much easier to line up ramps, since you can make both visual and auditory reminders to use your cooldowns ahead of time: https://wago.io/n7l5uN3YM

The kind of Weakauras you use is very much a personal preference. Weakauras that work as a kind of all-in-one package that include a lot of the important things to track are very popular such as Luxthos can be found at: https://wago.io/LuxthosPriestDragonflight