Hi, first and foremost ill like to congratulate Method on their World first accomplishments in Throne of Thunder. But also a special shoutout to Midwinter who took a big step up the progression this tier! Well done! Now we can continue with what we started last time, one of the biggest raids in WoW history (at least as far as square footage is concerned). 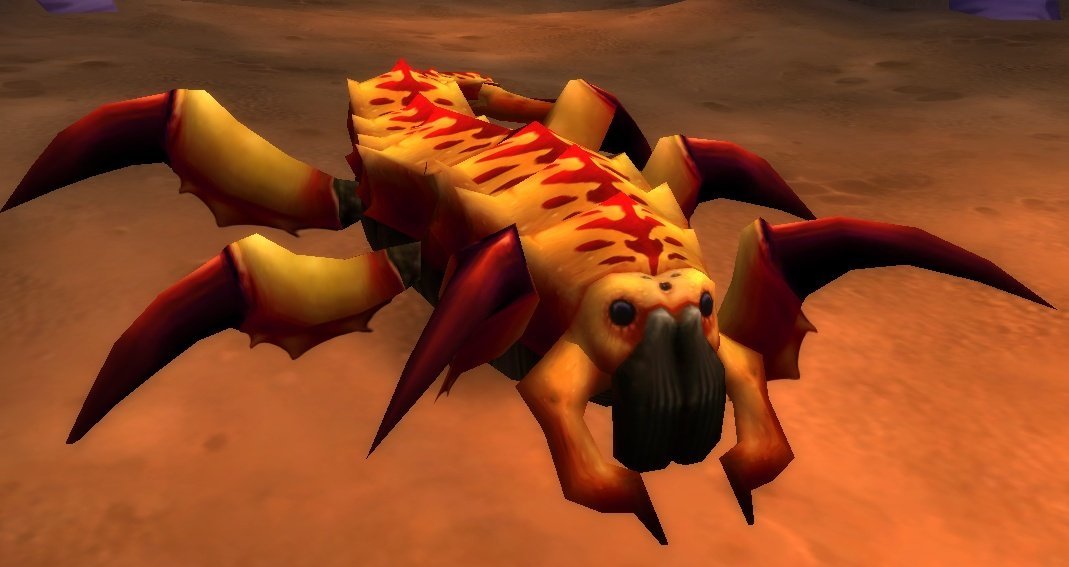 If you asked me today I wouldn’t know if this was actually a boss or a trash mob - this fight is pretty much free loot.
The fight consist of very few abilities: one of them was Mortal wound, a stacking debuff Frankriss did on the current main tank, reducing healing taken by 10% per stack and you needed to use 2 tanks to swap around when the debuff got too high. Otherwise the boss didn’t hit particularly hard and pretty much any geared tank could handle it. He spawns 2 different kinds of adds, Hatchlings and some big yellow worms. The worms are called Spawn of Frankriss and enrage after 20 sec starting to do 5 to 10 times the normal damage and 1 shotting everyone they touch. So it was important that dps swap to the them asap, that they are tanked and killed. There can be up to 3 worms spawning in a very short amount of time. The 2nd kind of add is the Hatchling, he spawns multiple Hatchlings at the same time (up to 8 I think) and if you try to kill them single target you just can’t really keep up.

So what most guilds figured out in like 1-2 pulls is, you tank the boss at the start and let the main tanks get a good amount of aggro, and the dps’ers do light dps so they don’t pull the aggro. Then when the Hatchlings start spawning you use AoE fears to fear them away from the raid until you have a decent amount of them like 2-4 spawns.  Then you make sure you kill the new spawned big Yellow worms so they don’t enrage and kill anyone. And then you stack up under the tail of the boss and aoe down all the Hatchlings. Once you had done this. It’s rinse and repeat, nothing more to the fight. Below I linked a movie to our first kill of the boss. Like most other bosses you can notice how “non” hardcore style it is, plenty of people having a good time writing in chat and the Mage in the movie didn’t actually dps the first 20% - no need, and you don’t pull aggro. 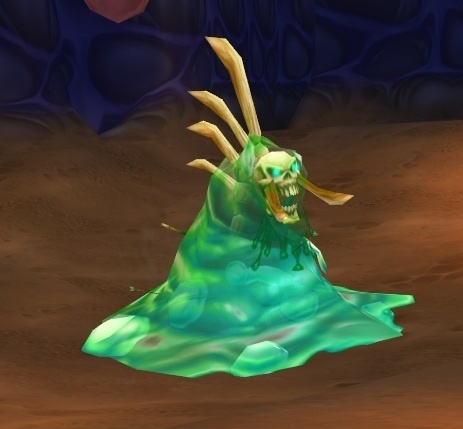 Once you killed Frankriss the Unyielding you had the chance to do an Optional boss (you didn’t have to do it to progress on into the Temple of Ahn’Qiraj). Viscidus was a Horde boss, which means bringing Shamans made the boss a lot easier than bringing Paladins (for once!). When we first got to this boss, we had no idea what to do and it took quite a few pulls to actually find out what the hell was going on. What happened was when you pull the boss (who does hit fairly hard on the tank) you do no damage whatsoever to him. And you just stand there and hit him. And that goes on for a while. You get a hint by the “world message in the chat” that it has something to do with freezing. And after a while (if you got that far) he starts to freeze up completely and shatters into 20ish small globes that spawn on the edge of the room. Each of these globes represent a part of his hit points and you need to kill as many as you can as a killed globe removes hit points from the Main boss. Failure to kill the globe will just mean it spawns on full hit point again at the new Shatter.
While this is all fine, there is 1 key component which is why this fight was considered ridiculous especially for Alliance:

Posion Bolt Volley
The volley targets the raid and puts on a 10 sec dot on everyone ticking for 600-1000 nature dmg every 2 sec. And this is while most people only had 3000-3500 hit points.
However if you were horde you could bring Shamans to drop Posion cleansing totems that dispelled a whole group instantly when they got it, so you didn’t take much more than a 1 time hit. This fight was really unbalanced between Horde and Alliance, other classes could dispel it but it took quite a bit of time to dispel 40 people and it cost a lot of mana to outheal and dispel everyone. In Curse we brought 6 Shamans for our first kill and later on we had 7-8 shamans to cover all groups to make the kill easier. Even if you had this amount of Shamans the fight still required you to Shatter fast enough so the healers didn’t run out of mana. Frost bolt worked, Shaman frost shock worked and wanding with a frost damage wand worked. But not all classes had natural frost damage abilities, and to shatter Visicidus into smaller globes you had to hit him a certain amount of times with a frost attack.

So the tactic was simple enough: go in, melee and hit the boss until he shatters, then go out in pre-assigned groups and kill the globes. Repeat this until he doesn’t have any more globes left and he will be on 1 hit point and die. 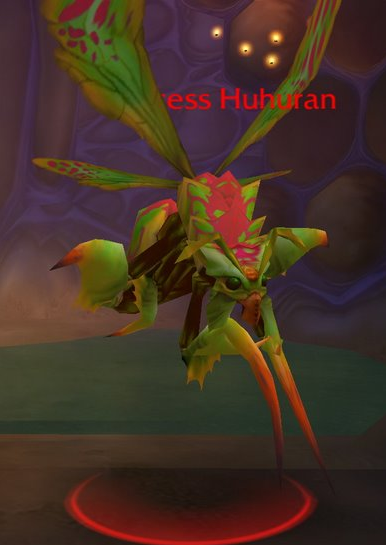 If the Frenzy buff that the boss cast on himself wasn’t instantly dispelled it could easy mean the death of your main tank. The boss was poison all the way through with different abilities relating to Poison damage. You again, like most Vanilla bosses, needed a few good tanks to deal with the encounter and make it easier for everyone. What you wanted to do is rotate the stacking Nature dot that she does on the main tank to 2-3 tanks so you kept swapping and not letting the stack grow too high. The boss was Taunt immune so all the tanks had to be pretty close in aggro so you could stop attacking for a bit and the off tanks could pull the aggro from you. This also meant dps’ers had to watch out for their aggro.

Other than the stacking MT debuff she did an aoe attack hitting the 10 closest people with the Wyvern sting equal to the one hunters have right now. However, if you dispelled the Wyvern sting the target in question took 3-4k nature damage before mitigation, and most of the time you would only dispel the tank that is next in line to take aggro. On top of that all ranged had to be spread out to avoid stacking Noxious Poison which was a dot she threw on a player and aoe around the player target, which silenced the target for a bit of time. And like I talked about in the start, every 15-25 sec she would go frenzy which meant you had to rotate at least 2 hunters who dispel her when she went frenzy - on our kill we had 5 hunters doing it to make sure it happened. On 30% she went into berserk mode and your melee group would take crazy damage including tanks. From 30% and down to 0 its basically a fight against time for your healers to keep the raid up. She didn't Frenzy anymore so hunters could also go full dps.

My guild had huge problems on this boss and it did set us very far behind in the race back then. A lot of guilds got stuck on this boss for a very long time and it was a killer. 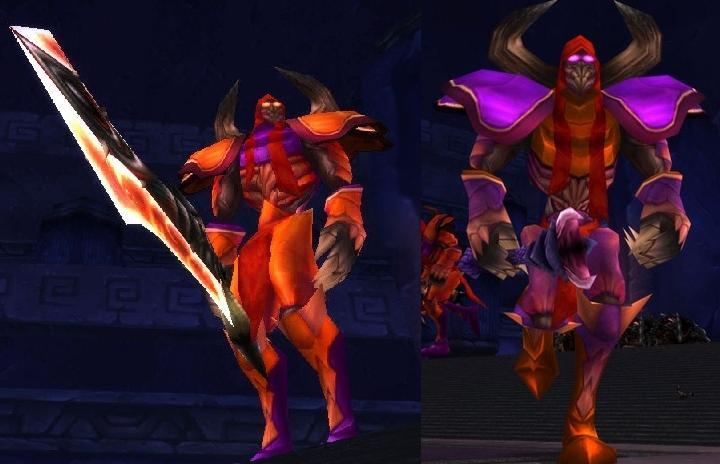 I wish I could tell you this fight was super epic and a great experience but then I would be lying. 2 bosses that share hit points, one had to be tanked by a spellcaster, the other could be tanked by normally. So most people started out with using a warlock for tanking which could work fine, but in the end most guilds found out using a tank spamming Battle shout was enough to keep agro from the healers, as battle shout was dealing “threat” to surrounding targets. Other than the 2 twins there were neutral bugs all over the place so you couldn’t use any aoe spells (like multishot) or a bunch of them would aggro. Once in a while these small natural bugs became big and you had to focus it down before it went to a healer and killed them.

Every 45 sec or so the 2 twins swapped place and reset aggro. So instead of having a warlock in place to try to get agro fast it just worked better with 2 warrior tanks spamming battle shout on each side. The dps always swapped to the one that could be tanked by a melee tank because of aggro issues. This was pretty much the whole fight, other than the random blizzard that he did on the ranged that was very to easy to avoid. Do this for 15 min and you had yourself a kill. Most wipes on this boss were due to failure to regain aggro after the swap or ranged pulling aggro.

The trash of doom

A boss with no loot? Yeah that’s pretty accurate for this trash, it was horrible. And there was tons of it. The trash after Twins was especially bad - I probably died more times to this trash than to any other boss in AQ40! (Maybe overestimated but it certainly felt like it). Large groups of trash mobs were roaming the room after the twins (and before for that matter). The special thing about these trash mobs was that they were hitting quite hard and there were quite a few of them. And on top of that they had a mind control ability so if the wrong classes got mind controlled at the same time if often ended up in a raid wipe or you had to kite around for some time. Like a lot of trash in this instance you used a hunter pet to run up there and pull it so you could FD if you messed it up and pulled 2 packs (happened quite often). It felt like killing trash in Ahn`Qiraj was as challenging as killing over half the bosses, and it felt really nice to have to run back in this instance for 4-5 mins to get to Twins room again after a C’thun trash wipe.

The final two bosses, Ouro and C'thun, get their own entry that will be coming very soon, as there's a lot of ground to cover there.