With the eternal commotion about Vanilla, it's value to current WoW, I thought it would be a good idea to give everyone a place to share their own memories of the beginning of this gargantuan game we all (sometimes) love. It can be about what made Vanilla special and different, or any fond memory you have from back in the day, it's time to go full-on nostalgia! And if you want a great overview of Vanilla and its various raids, you can check out Wormie's Classic Vanilla series. So share your favorite moments and stories from Vanilla with us, I'll get us started and i got a few others to chip in as well:

The first story goes well with the discussion about gear and the ease with which you get it nowadays. Back then leveling took forever and around level 40 I was randomly in Orgirmmar when I noticed something in the distance. It was a Tauren (the clearly superior race), but his hugeness wasn't the only reason it stood out. What was that golden armor jutting from his shoulders, the design is so much more complex than the stuff I've seen so far in the game?! At the time I was still fairly new to MMO culture, so seeing this golden god in this otherworldly armor was amazing to me, I thought it was so cool that some player has gotten to max level already and that that kind of armor was the reward for getting there and accomplishing something in the endgame. Little did I know that a) That was Valor armor, the blue set that drops from the top level 5 mans and b) that that player would later be my guildmaster and something of a "big deal" in the WoW community. I believe his name was Kungen, or something similar.

The second is a bit more generic, and totally not in here just because I have a screenshot of it. You never forget your first epic weapon as a Warrior, believe me. There's a heavy dose of irony to go with this story as well. You see when we were in molten Core back at the beginning of time, no one really knew what the legendary "Right and Left side of Thunderaan's Eternal Prison" aka The Bindings of the Windseeker was. Supposedly it was a 1 handed sword but that was about all we knew; was it even creatable at the moment, what else did you need, and where did the other part drop? So at the exact moment I got my first epic weapon, the fabulous Obsidian Edged Blade, we got the left Binding as well, from Baron Geddon. Obviously I was giddy, and no one really wanted the Binding since we didn't know wtf it was. Jihan, a rogue, took it in the end, but he wasn't too happy about it, he just took it so it didn't get wasted. 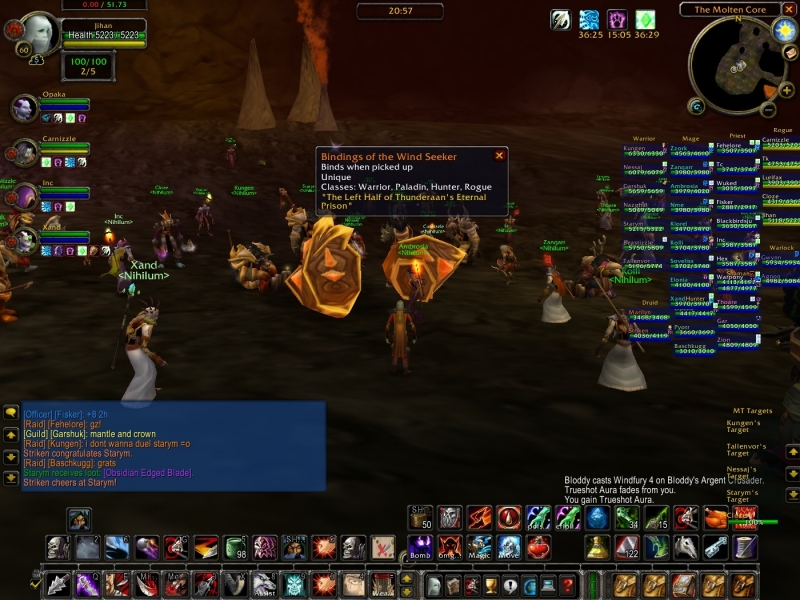 Skip forward to some 2-3 years later, me running my 192398128391838th Molten Core, desperately trying to get the other half of the Bindings to FINALLY get my Thunderfury, still the best tank weapon at the time. The irony, as if you haven't figured it out yet yourselves, is that I was missing that exact left Binding from Geddon. To this day I have the Right Binding in my bags, waiting for its twin to come.

There were plenty of reasons as to why the guild DAWN decided to move from an overpopulated Zenedar to a nearly empty realm, Executus, and I was skeptical for a reason. We’ve always heard of such things as a low-pop ghost server where you wait hours in a battleground queue, just to face a group of enemies quitting the second after they realize they’re playing a pre-made team. We fretted the lack of world PvP and months before the server gets enough Alliance to even start an Alterac Valley battleground. All those fears did turn to be real, since that was exactly what we faced. But here we were, one day left on a high populated server, where we’d made our name both in raiding and PvP, owning pretty much every single server first raid kill and being unbeaten in Warsong Gulch for months.

The last day we were supposed to have this big farewell outside Ironforge – yes, I realize it's lame, it wasn’t my idea damnit – and the only reason why I actually went was to have a few last duels with the people I’d fought with the last year in battlegrounds, in world PvP and in a silly amount of duels we used to have in northern Barrens and whatever the zone outside Ironforge is called.

While the guild and dozens of tag-alongs were skirmishing and fighting with the Alliance at the gates, I met up with a few people and we did what we usually did, fought and trash talked on the realm IRC channel. Suddenly, I get a PM from Raymond, a retribution paladin in times where calling yourself that or even worse, showing up in a fight with a sword would be a laughing matter. But this guy was pretty damn well geared, very skilled and was a leader of the best Alliance WSG team, the only one that really stood a chance against our team when we were full. He had a reputation on the Zenedar PvP scene (elite stuff, I know) for a reason, and two of my warlock buddies saw him as an ultimate nemesis, something they could never beat in a fight. Think facing Sargeras riding on Deathwing, with C’thun and Yogg as pets, that’s pretty much how they’d describe their chances in a one on one fight. I always bragged how I can beat him easy, which was for the most part true. Retribution paladins had very little chance against my build and gear, succubus spamming skill-build of destruction was the s**t, and they, well… weren’t. So I call on my friends to come to some random clearing in the middle of a forest, where none of the rabble was bothering us, and while still around ten people gathered to watch, there were no bigger disturbances. We dueled for some time, me racking up win after win, all in good fun and I was eager to show my friends how easily it's done. Seduce – bolt – seduce bolt, wait for the bubble, seduce – bolt. Easy peasy. He decides to swap some gear around, and I’m chatting to the buddies that just appeared to see a quick course in destroying a guy they’ve never beaten. Having to leave soon, I instantly accept the duel and start my whole thing, quickly noticing that something wasn’t quite right. His epic plate armor was gone, and what stood in front of me was a bearded guy in a green dress – full cloth healing gear. Pfft, what is he trying to do, out-style me? I continue my whole thing, spam those bolts and realize, well… while his HP is going down fast, he’s recovering it with ease. Continue spamming and this suddenly turned into a dps race. Well, a one way race at least. I would be spamming my bolts, draining mana, health, doing everything I had in my arsenal, but ultimately having to life tap to regain mana and in the process losing HP. My bandage attempts were easily thwarted by the fact my pet was long dead and he could do whatever he wanted, but not with a scary two-hander that used to slice, but with a healing weapon, it couldn’t have been more humiliating. I couldn’t re-summon my pet, victory was fleeting and all this time my friends were laughing at me like mad. All that talk, all that bragging and boasting culminated with me being chased by a guy with a beard in a dress, hitting me for a few hundred damage at a time, while I’m on 5% hp and 5% mana. Embarrassing - and they didn’t let me forget it for months. Saying how I’ve just beat him tens of times and how this was unfair and how this isn’t even his PvP build was for naught. The bearded lady killed me, I was a target of mockery and the next day we were on a new server already, one that never offered even a slither of PvP fun compared to Zenedar and moments like this.

One thing that strikes me as a somewhat special story was when we opened Ahn'Qiraj on Vek'nilash. Both the guild I was in (Windwalkers) and a rival guild of the server had completed the scepter (it was a quite rare occurrence that two guilds on a single server would have it complete) and we both wanted to be the guild to open up the new instance. This resulted in us camping outside the gate for hours, with our poor guild leader spam-clicking his right mouse-button on top of the gong that activated the instance in the case that it would become active. While all of this was going on, both guilds tried to get the holder of the scepter ganked, and the whole place quickly became a huge battlefield and the server went down a few times. I heard that some even tried to DDOS the scepter-holders with IPs found from irc – to some success. In the end, our guild leader proved to be faster right-clicker because the guardians of Ahn'Qiraj announced him as the opener.