A big day for Method as all three of our NA teams were competing at this weekend's GCDTV NA May Clash, but only one could come out on top and it was Reborn! And to make it a proper quad Method experience, we also had Ziqo sitting in as one of the casters. The actual journey for our veteran team to the grand finals and confrontation with Sneaky Snakes was quite a long one, taking them through the lower bracket and causing plenty of friendly fire along the way. Reborn had to take out Synergy first and then it was on to teamkill No.2 as they faced Awakened in the lower bracket finals, which ended in a 3-1 victory.

Two Method vs. Method matches, as Reborn clash against Synergy and later Awakened.

The grand finals at least brought some measure of revenge for Synergy and Awakened, as it was Sneaky Snakes that dropped both into the lower bracket where Reborn had to reap them. In the end Reborn aced both grand finals Bo5s against Sneaky Snakes, with the double 3-0 sealing the victory and giving them a well deserved 40 championship points! So big congrats to Cdew, Bean, Samiyam and Snutz as they keep heading down that road that leads to BlizzCon! 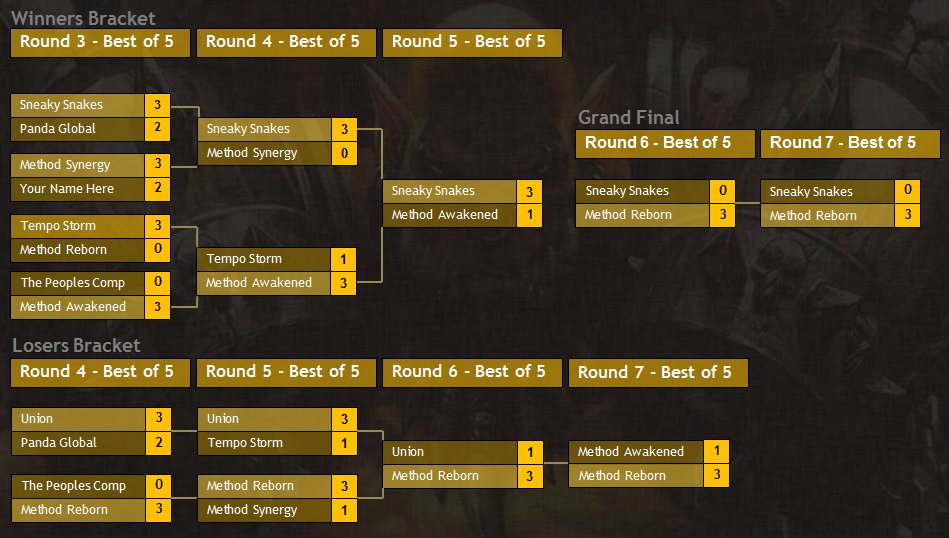 Here's the full VoD of today's action, with the first of the two grand finals Bo5s starting at 3h33min and the second at the 4h18min mark.

In case you've missed previous cups and GCDs from this year's road to regionals and/or just can't get enough of Cdew and the gang, make sure to check out Method: Reborn's adventure in their ongoing youtube series!