Raid History Raiding Outside the Box: Autonomy and Responsibility

Raiding Outside the Box: Autonomy and Responsibility

Following Tyvi’s article about raid leading our guild and my first one describing our general approach to raiding, this third installment discusses our liberal approach in terms of raider autonomy and responsibility. Most raiders, especially those that play not at the very top, are only responsible for not dying and providing constant DPS or Healing. Raid awareness and understanding of the fight is not necessary for most players, as they are directed through the encounter by a raid leader and/or a few trusted officers. Meddling in tactic discussions or call-outs is a big no-no, as is challenging CD rotations. Even though I am generalising, I feel most of you will be familiar with these points.

“The way we start an encounter healing wise seems very chaotic; the only thing we decide on at the start is who has tank priority and only divide healing responsibilities once we have a good picture of the incoming damage. After several pulls we discuss when it’s best to use each healers’ CDs, leaving a couple out that remain free to be used based on personal judgement.”
- Jenesis

All for One and One for All

The majority of raiding guilds are structured in a hierarchical way, with a raid leader being overall responsible. It is his/her role to make sure raids happen and encounters are defeated, with the support of one or more players, who are often also officers. The assistance may come in various ways, from managing administrative tasks such as sign-ups, raid invites, marker placement, call-outs and ready checks, to more performance oriented responsibilities, for example concocting strategies, dealing with players or managing specific role/class aspects. Bigger raid groups have usually more layers in the hierarchy detaching the ordinary raid members from the decision-making. This raid management includes the definition of strategies for encounters, even if it is only a link to a guide on the forum stating "go watch that video, this is how we’ll do it". Some guilds might be more flexible and open to discussion, though sadly, in many instances this is based around picking the best suited guide and adapting it to fit the guild. Whilst this might be very viable and sensible approach for guilds chasing progress or the very casual ones with little time and/or experience, I want to question why more thought isn't put in by the vast majority? Why should ‘ordinary’ raiders not contribute to strategy creation, particularly in smaller, 10man guilds?

This high level of raider autonomy, and in turn responsibility, is relatively rare (in non-top guilds). Autonomy implies that our raiders are sufficiently competent to not stand in fire (or, if you happen to be a vengeance abusing tank called Tyvi, standing in fire) and know how to best utilise one’s class (well, most of the time!) without being constantly reminded to do so by call-outs. Additionally, our raiders are expected to be aware of the rest of the raid, from CD interaction to movement. Ozzen  has summarised it rather well:

“It seems to me that in this particular department each raid member has a lot of autonomy to come up with ways in which his or her class can contribute the most, how and when during any given fight. I often read in the healing channel and party channel how and when certain people use certain CD's, and why they feel this to be the best option; we then sort of adjust and tune their CD usage towards each other, making fights feel quite organic in their execution rather than mechanic. Things like CD rotations are 'discovered' by doing attempts rather than 'imposed' by any one member. That being said it might take longer for us to get a good CD rotation going (I'm thinking of Thok here) but once it does get going it's usually very solid and fail proof.

This individual autonomy spreads to DPS target assignment because our DPS is competent enough in most cases to make the best choices during any given fight. I think this seldom leads to cheesing (correct me if I'm being naive here) even after encounters are on farm, thus our DPS is not only quite effective but also efficient. Therefore I would say that that horrible word known as 'teamwork' (shudder) is more a case of a bunch of competent individuals bringing their two cents' worth to achieving a goal than it is a pack being herded by one or two leaders.”

This autonomy is, in my opinion, a great display of patience and trust in and by our raiders, as well as by our raid leader Tyvi (or maybe he is just very masochistic), but there are further advantages. Aside from our raiders feeling a greater sense of inclusion, it also means that everybody understands the encounter, knowing why they are doing what they are doing and how this affects the group. Everyone understanding all aspects of the encounter enables us to efficiently do ad-hoc adjustments during a pull if necessary.

Take Thok heroic for example: we might have two marked stack points, one for melee and for ranged, positioned pre-pull so that a) there is enough distance between the groups but also that b) Èpeen’s efflorescence can reach both groups. Additionally, we have agreed that he is HoP’d by Plog on the 18th screech (for tranquility), followed by Jenesis’ barrier, before the ranged group runs in to join melee on the 22th screech, at which point Arius drops his smoke bomb. Now, for the sake of argument, let us assume that we somehow ended up with the boss 20 yards out-of-place - for us, that would result in (endless) tank teasing, whilst we all just adjust without further ado, as everybody knows why they need to be in a certain relative position to and distance from each other. Furthermore, assume that somehow Plog’s HoP did not go off (not that this might have ever happened…) and Èpeen cannot use tranquility – a simple "didn’t get HoP’d" leads to everybody else quickly adjusting, using ‘spare’ CDs and/or bringing others forward, as well as amending the stacking.
Or, alternatively, assume a weapon does not get killed on Siegecrafter Blackfuse’s belt (again, not that this might have ever happened…): we do not just wipe due to "gah, a weapon too many, does not compute, help, what do I do". Instead, we immediately adapt positioning and priorities as well as assignments, allowing us to recover more often than not. Yes, yes, of course it should not even happen in the first place, but that is another matter and the examples are purely *cough* hypothetical!

After a wipe we again heavily rely on all of our raiders in order to find out what went wrong: if it concerns a particular raider’s death, we want them to be able say what happened, why it did and whether it is likely to happen again - "dunno" is not good enough (though the cats on the keyboard Tyvi mentioned naturally are).  Similarly, if there is a specific ability we are not dealing with, or if position is off, or if anybody sees any other flaw(s) in what we are doing, it is addressed. Occasionally, it might be small things, such as adjusting the timing or raid CDs; at other times it might be far more complex and take us a whole raid night trying various things out - sometimes successfully, sometimes not. In those cases, we move the encounter discussion to our forum, making notes of what we tried and what went wrong, usually followed by a picking apart of logs and more brainstorming. A few tend to lead to amusing (and not necessarily raid related) topics.

It might also be worthwhile sharing that although we use voice comms for our raids, some rarely speak and others never do, including, believe it or not, our raid leader Tyvi, and instead type in /raid! Yet others talk a lot, some even occasionally sing - a certain person might have once gotten the words to Hakuna Matata wrong, but he shall stay un-Aneyzad… oh, whoops! In Arius’ words:

“Our Ventrillo is VERY silent compared to just about every other guild, even on progression fights. It’s happened several times that during fights my headset turned itself off because it didn’t receive audio for too long :D. It’s funny as it also shows that we don’t need people yelling orders all the time, we can easily improvise and read the fight ourselves. I also feel that often we don’t really need to communicate certain things because we seem to know each other quite well and how we react in certain situations when something go wrong.”

Previously I elaborated on our raider’s autonomy and the importance we ascribe to it, now I am about to mention that we nonetheless utilise some call-outs. Whilst this may seem contradictory or even hypocritical, I can assure you that this is not the case. We do not deny the helpfulness of communication during an encounter, particularly if some raiders are in the process of dealing with a particular taxing element, or when a certain mechanic proves to be challenging for some. Alternatively, the encounter area might be very large, or divided/blocked from view; adjustments might have to be made ad-hoc for a multitude of reasons and it might sometimes be as simple as it having been a long day and tiredness creeping in. 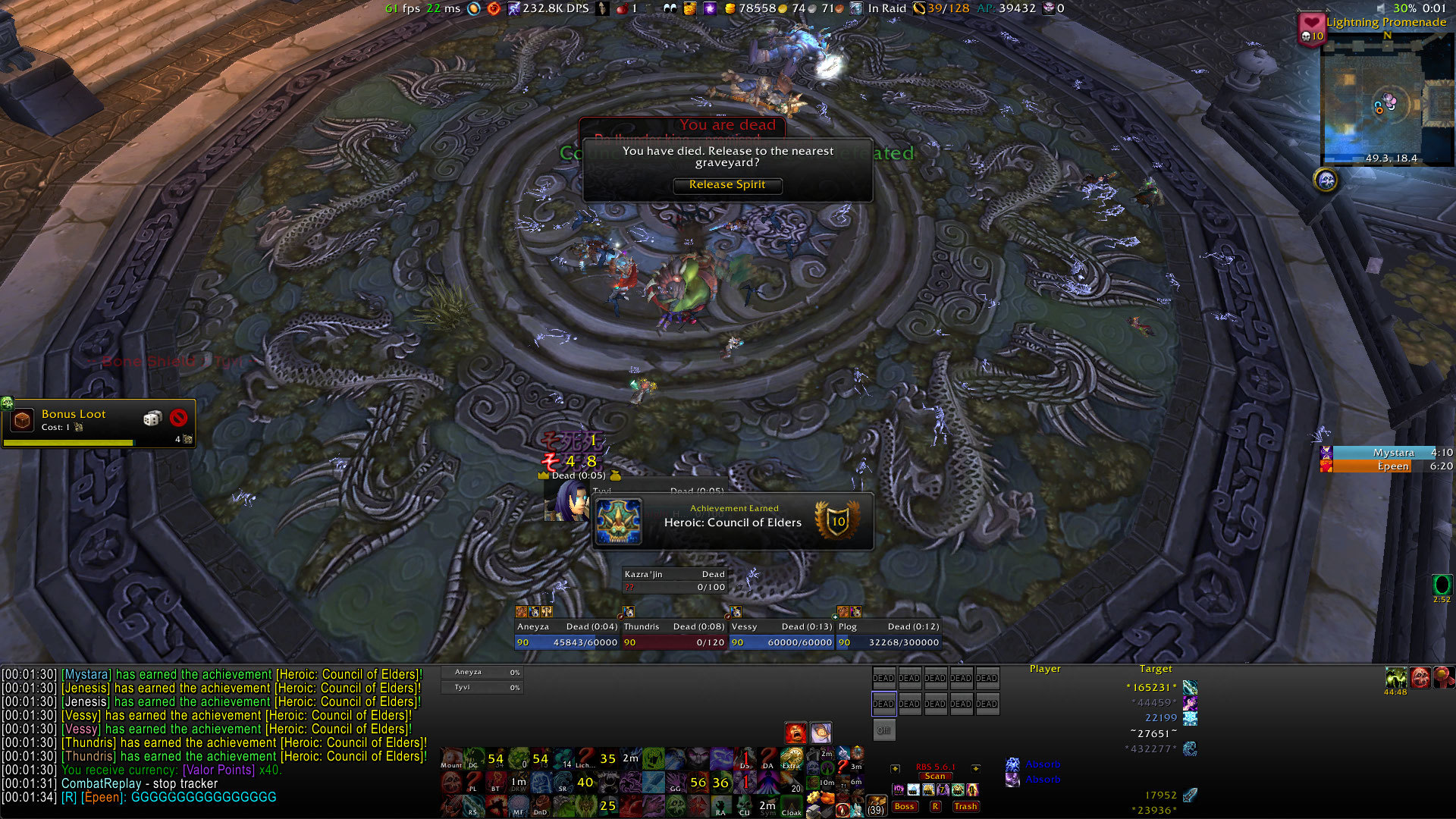 In any case, even when it comes to raid call-outs we share the responsibility, in contrast to having a specific person assigned for the majority of encounters: Níck might for example call-out falling ash on Shamans; maybe Jenesis will announce banner on Nazgrim, or maybe Plog, or Aneyza will, whilst Tyvi decides on when to just ignore defensive stance and burn through the last few percent; Aneyza generally ensures we are in the ‘safe’ area on Malkorok, unless he confuses red with blue, then insists he meant THE OTHER red or was just testing whether we were paying attention (which of course we wholeheartedly believe… NOT); on Thok on the other hand I might double check our positioning (and occasionally shoo melee away) whilst others deal with raid CDs. So in essence, it is very much a shared task.

The fact that this liberal raid approach does not (usually) result in disaster, I believe is predominantly due to two reasons: the maturity of our group and Tyvi‘s leadership, who knows when to step in and when not to. Of course some raids do not work out as planned and some might go topsy-turvy, but I think that all guilds experience that, including the ones at the top! One other thing to note is that we currently have the advantage of being a 10man raid guild, thus limiting the numbers involved in the discussion at any given moment – that said, our approach was the same in 25man (and more) raiding pre Cataclysm and we are confident to continue this way in Warlords of Draenor with a 20man group.

In the next and last installment, I will take you through Siegecrafter heroic from our perspective, sharing our discussions and spreadsheets working out weapon overcharges, belt assignments, raid placement and healing. Ah yes, tank stuff as well of course!