Welcome to the conclusion of my series. It’s time for the serious business and big daddy Lei Shen is waiting for us. To put things back into perspective we are one week into progression at this point and after a 9am raid start we manage to clear all the way to Lei Shen, getting world 2nd on Twin consorts by around midnight. We’re pushing a 14 hour raid already at this point; we call a 30 minute break and plan to get a grasp on what we had lying ahead for us. Of course, I use this time in a valuable manner - me and Darren go for a celebratory McDonalds and head back before the break ends. From our practicing on normal and mild theory crafting we made the assumption that leveling up any of the abilities was a not an option at all, so when we saw the HP value of it on heroic we realized the DPS check for phase 1 was no joking matter. We spent those first few hours on Lei Shen just tweaking and working how to optimize phase 1 to the maximum in terms of DPS, It didn’t take us long to establish the phase 1 tactic that we eventually stuck with for the entire progress. With such low gear levels, no legendary meta’s/cloaks, the phase 1 DPS check was fairly brutal and it was hit and miss whether we would make it each attempt. As many of you know the new RPPM trinkets introduced in Throne can lead to some very varying DPS numbers from attempt to attempt and in the end it came down to that fact that if more than a few people had bad trinket RNG on a single try, we wouldn’t make it. 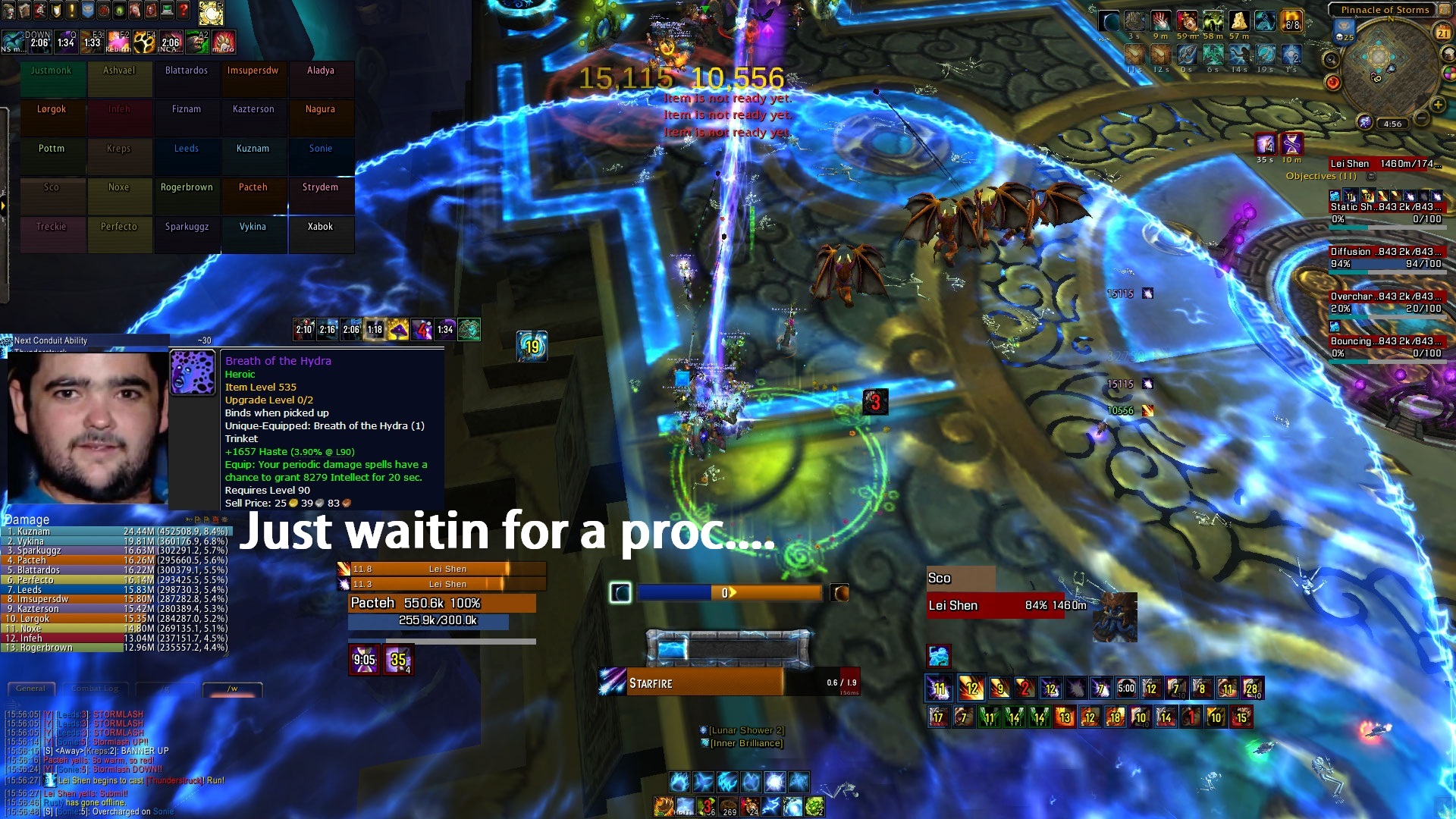 We came back fresh Thursday realizing we needed to tweak the setup as much as possible. Now the transition phase was pretty much identical to normal mode, only a little less forgiving, and the addition of the Helm of Command mechanic was completely negated when running with 4 warlocks; however it still claimed a few casualties. We tailored the raid around stacking as many classes as possible that could soak a Static Shock by themselves - this became even more important when we saw how brutal the final phase was. From our normal mode testing we realized that a minimum of 7 people needed to be out of melee range for the Ball Lightning mechanic in the 2nd phase and so after sorting out some positions and a grip/stun rotation, we had the whole phase 2 tactic sorted by the 2nd day. 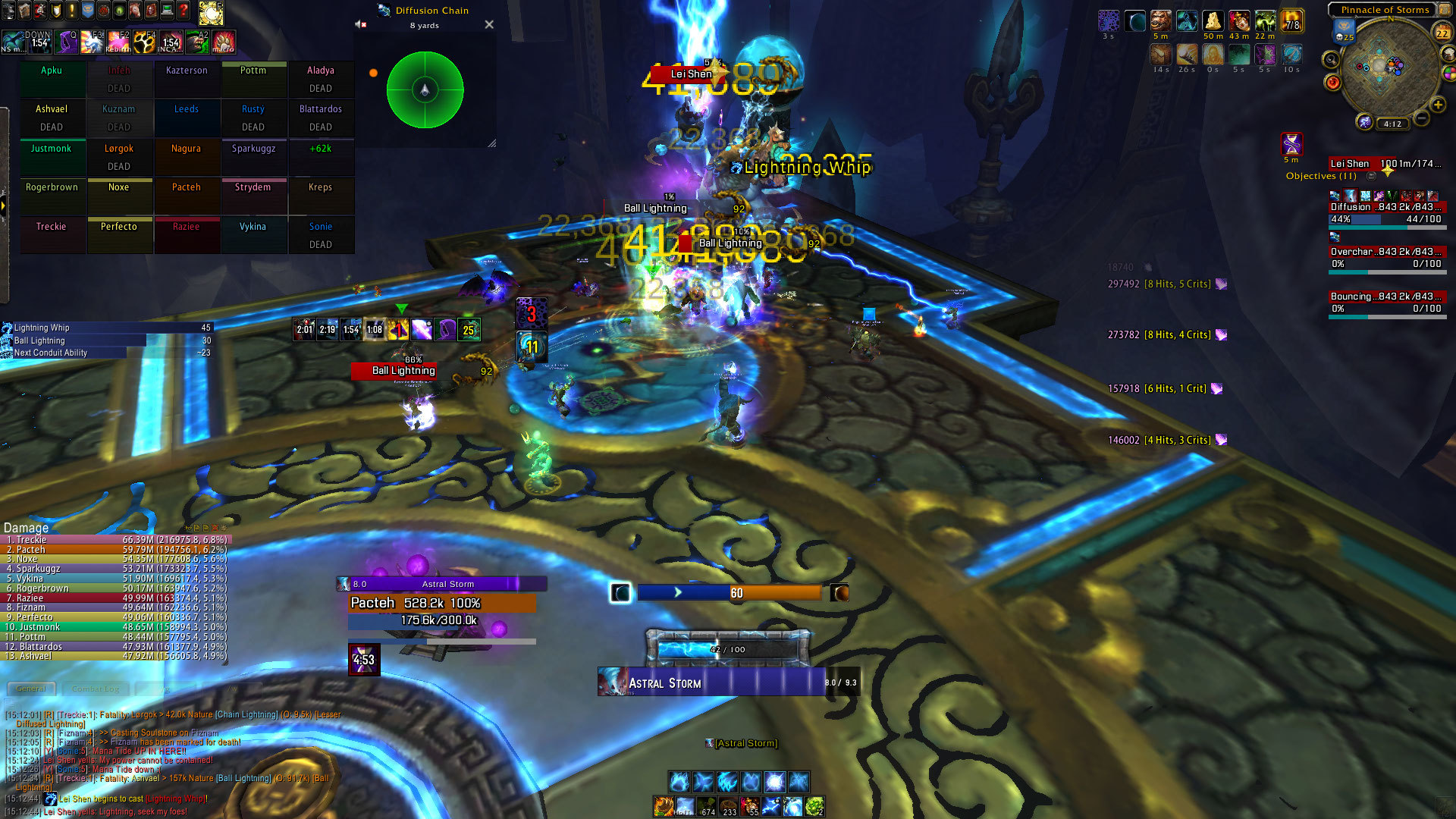 Lei Shen is just one of the those fights, like all of the hardest encounters in WoW, where so much can go wrong. On a typical session of pulls in the early few days there was usually a different thing going wrong every single attempt, the randomness of the DPS in phase 1 and the huge potential for failure in the transition phases made it hard to keep progressing forwards. The simplicity of phase 2, however, meant that after only a few attempts there we managed to clear it and so by the end of the 1st full day of progression we had seen a glimpse of the final phase. More importantly, however, we realised that the fight hadn’t even really started and the final phase was a on a whole different level than the rest of the encounter.

Fighting among ourselves is never helpful on progression but it does happen, people have arguments over how things are being done, tactic decisions etc. I don’t know which poor soul antagonised Blatty in this case but they sure never questioned him again!!!

When you’re raiding these 12-14 hour raid days during progression you really get to know each other pretty well, I’m sure a lot of top guilds feel the same way. In Method, however, we probably have one of the best atmospheres during progression and farm.

Over the weekend we tweaked and tweaked the phase 3 tactic until we got something viable to control the damage of the last phase. We ended up with a beautiful tactic consisting of perfectly setup Warlock portals, a perfectly mobile ball spawning team and I started thinking that maybe we would actually kill this. By Sunday night we were getting in and around the 10-15% mark, and the kill seemed pretty close, what we were starting to realise at this point, however, is that even when we orchestrate this tactic flawlessly, the DPS requirement to beat the soft enrage of the ever increasing wind damage is going to be a huge challenge, we really couldn’t afford to lose any DPS in the final phase and what you see in the kill movie is a flawless performance of that last phase. Killing that boss with the gear level we did was probably as close to impossible as it can get, I’m not sure phase 3 would have been doable in any less gear than we had.

As the next week approached so did peoples' real life commitments, we had gotten very close on Sunday night but sadly had to start cutting the raid hours from Monday since both Aladya and Sco had to return to work, and so we were forced into a 4pm raid start on Monday and Tuesday. We had no idea how close other guilds were but we felt it would be a crime to not get the kill in this reset - it turns out we were actually miles ahead of the competition but of course you can take no chances. 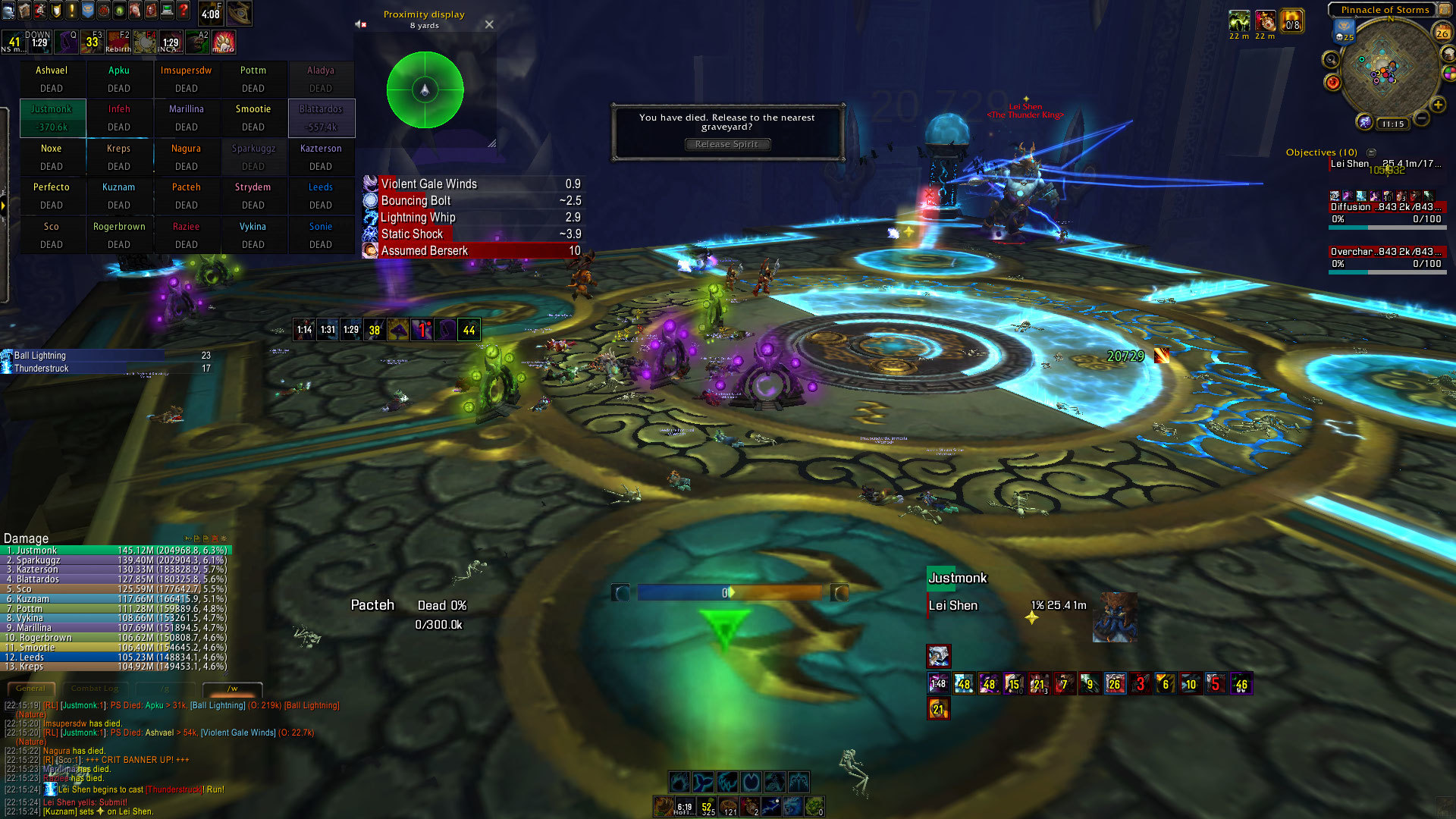 Monday and Tuesday night we were starting to get the real nail biting wipes, the 1-5%ers. At this point we were pulling while knowing any attempt could be the kill try, we just needed some decent RNG in the final phase with Static Shocks and the stars to align with the DPS and it was a kill. The pressure was really on on Tuesday night and the sense of relief when we killed it was unreal, just listen to the final moments of the kill and you realise how much it meant. Sadly, the evening couldn’t be spent celebrating, we had 30 attempts on Ra-den to burn and so the next 3 hours were spent mindlessly pulling trying to find out as much information as we could before the server shutdown at 5am.

Ra-den was nothing but a massive disappointment, the fight is so flawed and mechanically easy that it’s almost a crime Wow progress has determined it to be the end boss of this tier. We were back raiding casual hours already, just evening raiding on the weekdays and slowly burning our 30 attempts over the next week, trying to figure out a viable tactic. This was a long and boring process, the discussions between attempts were getting very long, and I was sat here wondering if I’ll have to re-flask between tries. The fun of raiding is the trial and error, when you’re on limited tries, however, it becomes a lot more theory based, there is some fun in having that added pressure of the attempt, but it really doesn’t outweigh the cost. Finally however, we discovered a nifty way to ignore pretty much half the mechanics of the encounter through ignoring one of the orbs completely and simply soaking a ball, still to this day I don’t I fully understand the fight to be honest because for DPS it's nothing but a Patchwerk fight were you move once every few minutes and switch targets every once in a while. I could probably have done Ra-den progress with 1 hand in all honesty.

Sadly for me, however, I wasn’t part of the final kill, we used our final attempts on Tuesday night and had gotten very close to a kill. Here’s a close try from a few days previous. 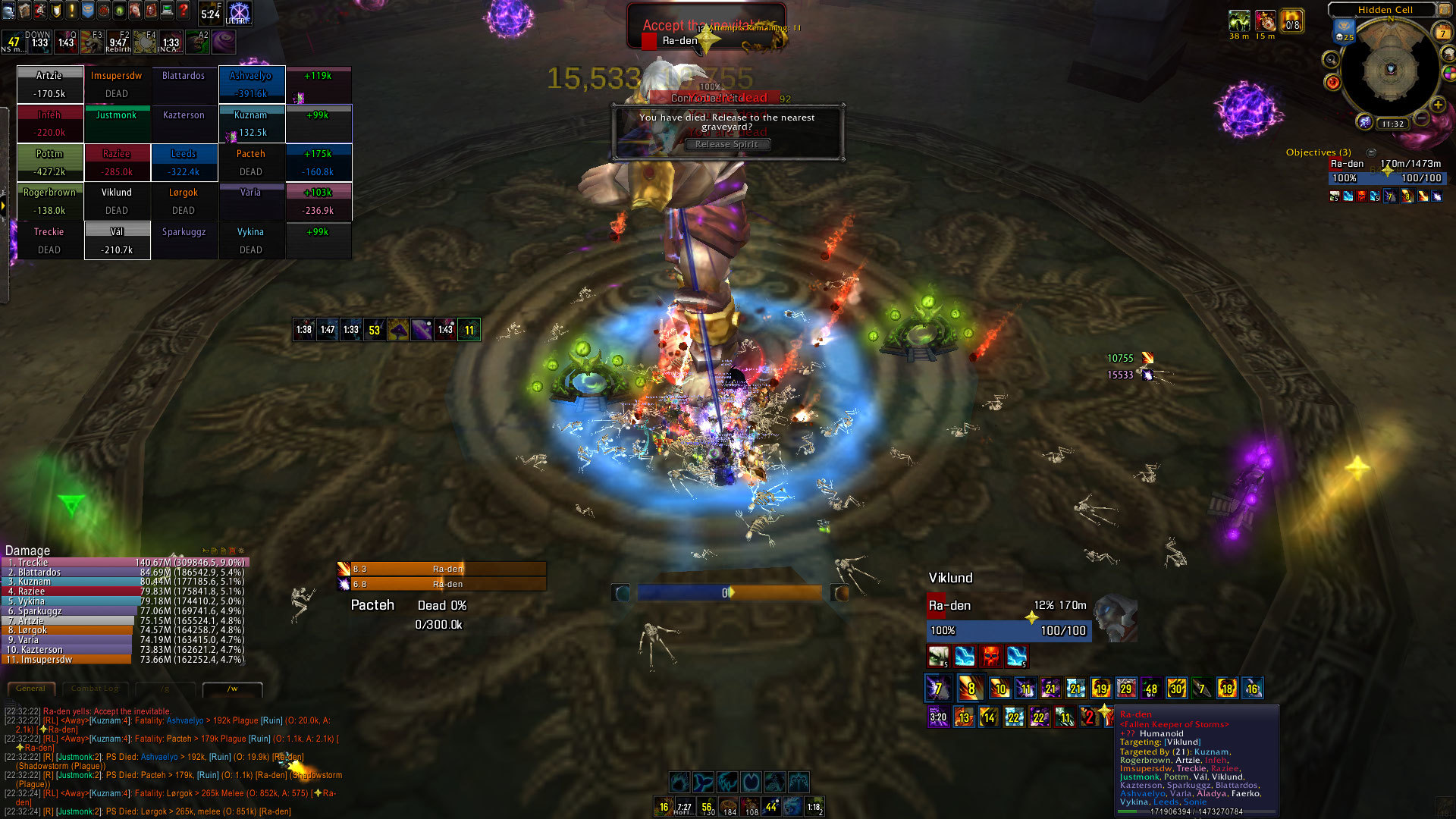 It was my Birthday on the 11th of April and I knew the kill would be done with ease with another reset of gear.  Such a lame excuse for a boss wasn’t enough for me to cancel a night of drinking, literally any ranged could take my spot and there was no learning curve or difficult assignments at all. So I decided to sign off for the night.

That’s about it really; all that was left was to clear up the devastation left after the LAN. Here is how bad it looked in its final form. It’s safe to say I didn’t touch a drop of Monster for a few weeks after progress. 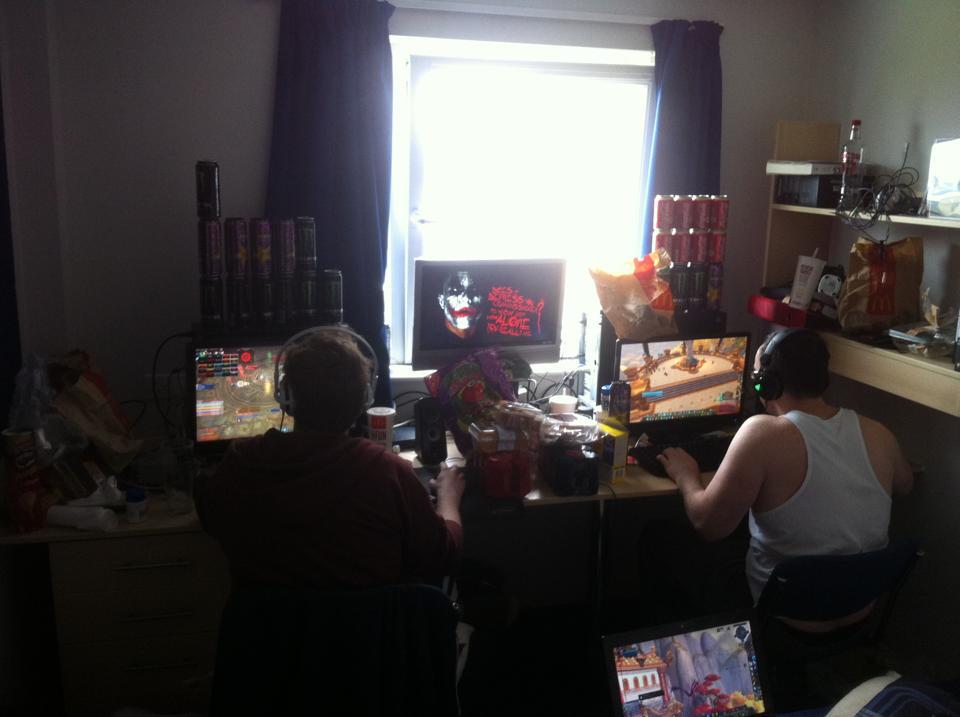