One of the funnest things about being in a progression guild is progression itself; we consider beta testing and bosses a part of progression. This is where the good, intelligent players distance themselves from the mindless cattle. It’s also the best time for applicants to join a guild since everything is on a level playing field. Everyone has the same gear, which is furthered by the fact that stats scale to a certain ilevel when inside raids instances. Furthermore, no one really knows what the bosses are like. Is Mechanic A going to need a raid cooldown? Can I grounding totem Spell B? How much dps will I have after I complete my World in Flames style evasion of boss mechanics that will kill me? One of the most important questions a hardcore raider will ask is how difficult/fun will the MOP encounters be? Will the difficulty/fun levels be high enough to merit me continuing to invest time in this game? Well now it’s finally time for me to weigh in on what the raiding scene will look like at the start of MOP! I do, however, need to add a caveat that I won’t be able to go into super specifics that may give away strategies developed by vodka as a guild. I will however give you guys an idea of what to expect when you step into your first raid instance in in MOP!

MV is probably the least of the three raid instances. None of the bosses have a raid mechanic that is truly difficult to deal with. It really does come down to individual player awareness. One could say that every boss has some sort of player awareness check where if you’re lackadaisical, then you will die. Guilds will either quickly cruise through this instance or groan every time they zone in or even both. Note that the beta servers just got the 15929 build, so I can’t comment on what the bosses are like with the new build since we haven’t experienced it yet.

The Stone Guard- The first encounter in MV and fairly easy. Basically this encounter will test your tanks’ mettle to communicate and manage debuffs. Some of the notable boss mechanics include a frost trap that spawns on the ground that will explode for 300k damage and fire chains that won’t break until you’re more than 8 yards apart for 15 seconds but does a ton of damage while you are apart. Honestly, as a healer I found this fight to be really fun. There is a huge amount of raid damage going out. You need to make sure people stay topped in case of any big explosions, all the while trying to manage your fire chains and dodging frost traps. Given that it’s the very first raid boss in the first raid instance of MoP, the difficulty is just about where it should be. I would give this fight a 2 out of 5 stars

Feng the Accursed- While this encounter may seem daunting at first since there are four different sets of abilities you need to learn about, in reality it’s really easy once you know what to expect. Of the different abilities, I would have to say that the lightning ability is much more annoying to deal with. If you’re bad and get hit by it--it stuns you--the problem is that when it radiates out from the boss it’s pathing is pretty random. The lightning phase aside, once your raid learns how to deal with each phase, you’ll find it much more manageable. While definitely a step up in difficulty from The Stone Guards, the encounter itself is still fairly simple; I would rate this fight at 3 out of 5 stars.

Gara’jal the Spiritbinder- Let me go ahead and say it, The Spiritbinder is my favorite encounter in MoP; it was by far the hardest in this raid instance (MV). When we got to test this boss, the damage taken by the raid was the highest compared to all of the other fights, and this was at the same time when monk healing wasn’t nerfed (although they are still really good post nerfs, but let’s save that for another time). The difficulty aside, the fight itself is pretty fun. If you’re intelligent, you can take advantage of the damage and mana return buffs. Overall the coordination and individual player skill needed makes for this encounter actually challenging and rewarding. For instance as a healer, if you get voodoo dolled multiple times in a row, you need to learn to maintain your mana whilst keeping your raid up. Maybe some tweaks in damage could be made, but I would definitely rate this 5 out of 5 stars.

The Spirit Kings- This is probably the second hardest encounter in this raid instance because of the level of damage and quick thinking needed to get through this fight easily. While this fight has the potential to be extremely difficult, the flip side that it can be super easy depending on what order in which you get the kings. This issue has two sides to it. I like the fact that it can be really hard, but the randomness that can happen during progression time can let one guild much more quickly get through this boss compared to other. I feel that doing something along the lines of Halfus where the order changed from week to week would be a great solution. The order aside, the mechanics are pretty fun. You need to dodge lines of charging soldiers, kite pulsing shadow orbs, and slay your own raid in order to break madness! Furthermore if you’re not on your game and cause either Darkness or Retalliation you are liable to wipe your raid! You can see an example of that here: 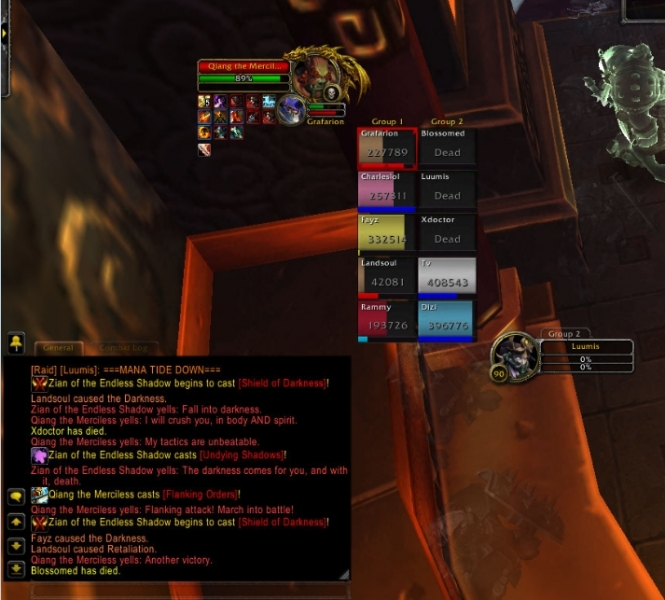 If you get a difficult spawn order, then I would rate this 4 out of 5 stars, otherwise due to how easy this fight can be, it should rate around 2 out of 5 stars.

Elegon- Is this the MoP dragon form equivalent of Algalon from the much beloved Ulduar? Based on visuals, yes, but based on difficulty and the lack of any rewarding feeling progressing through the fight, no. Honestly the fight mechanics are there. Adds spawn that you need to manage and not die to. There’s a decent amount of damage to heal through. There’s a dps check where you need to make sure your spark doesn’t reach the pillars. The issue here is that the numbers are just far below what it should be in terms of difficulty for the 2nd to last boss of an instance. Maybe, with more stringent dps checks and strain on healer mana, this fight could rate higher than just 3 out of 5 stars.

Will of the Emperor- For the last encounter of the first raid instance of an expansion, not bad Blizzard. This fight is a legitimate check on managing yourself in both damage/healing as well as avoiding the swings of the twin bosses. The most important thing about Will of the Emperor centers around the dance. Your raid, especially your tanks and anyone on the boss need to be able to dodge all of the twins’ swings or your dancers won’t get to hit the twins for a high amount, about “a baillion” as Tatix would say. The dance aside, there are a ton of additional mobs that constantly spawn that the raid needs to deal with. I definitely rate this boss pretty high, at around a 4.5 out of 5 stars!

Blizzard’s finally confirmed rumors about artificial gating with this recent post. To be honest, it was met with mixed feelings here in vodka. On one hand, Blizzard is addressing one of the hardcore raiders’ complaints on how the they unload so much content when an expansion starts that we don’t get to enjoy it. On the flipside, the average age in vodka is around 25 or 26, and most of us have jobs. We can’t exactly take 2 months off from work for progression; usually we all ask for 1-2 weeks off when hard modes happen in order to get our competitive fix every 8 months. Another problem is that Blizzard says that they don’t like raid stacking, but that’s exactly what gating enables. Now, instead of leveling 1 character as soon as possible to raid, we need to level multiple toons in order to raid stack for that edge in progression. Without a doubt there will be guilds that will do exactly that. I’m not so sure that’s the kind of environment Blizzard wants where we’re forced to level multiple toons to maintain an edge. If Blizzard claims innocence or says that guilds don’t need to raid stack anymore, then I'll just point to how top guilds were renting mages from other guilds in order to kill Spine of Deathwing. As you can see, I’m ambivalent on the issue since it’s both nice (being able to see/enjoy content) and bad (having to level multiple alts) for me at the same time.

Time for funny guild stuff, mumble bloopers, and final notes. Shout outs go to Kevin aka Stormbornz and Desaar for the music recommendations. If you’re interested in raiding with the best, then visit vodka-guild.net and throw up an application! Anyways I got a lot of messages of people missing our mumble sound clips or here are two! And here’s some music recommended by Stormbornz and Desaar!