Raid History Luumis Served Vodka: A Year in the Guild

Luumis Served Vodka: A Year in the Guild

While I was wondering about what to write about for this week’s blog, I was going through vodka’s member history on wowprogress to realize that I had finally been here for a full year. Let me apologize ahead of time if I start to ramble about the past or become sentimental. But before I continue with my year in review, let’s quickly go over what happened in raids this week.

I apologize because I think I unconsciously made this week’s blog especially long to make up for last week.

Once again, we split the roster up into 2 raids of mains in order to maximize potential loot gains. And as per usual we started with our double double concurrent (four total) Baradin Hold clears. The officers don’t care what character you brought to the runs, but alts need to be able to out dps the tanks at least. Acrylic decided to go on his protection warrior in order to pick up gear. Traditionally, he’s had trouble keeping high threat especially over dps mains, but last week he got the tanking weapon off of Madness and this was the result:

Anyways the first group got started on Morchok, and we immediately knew that it was going to be an eventful night. We wanted to try out underhealing, which meant that I finally got to go enhancement and dps. Here’s my group trying to figure out what side were on: 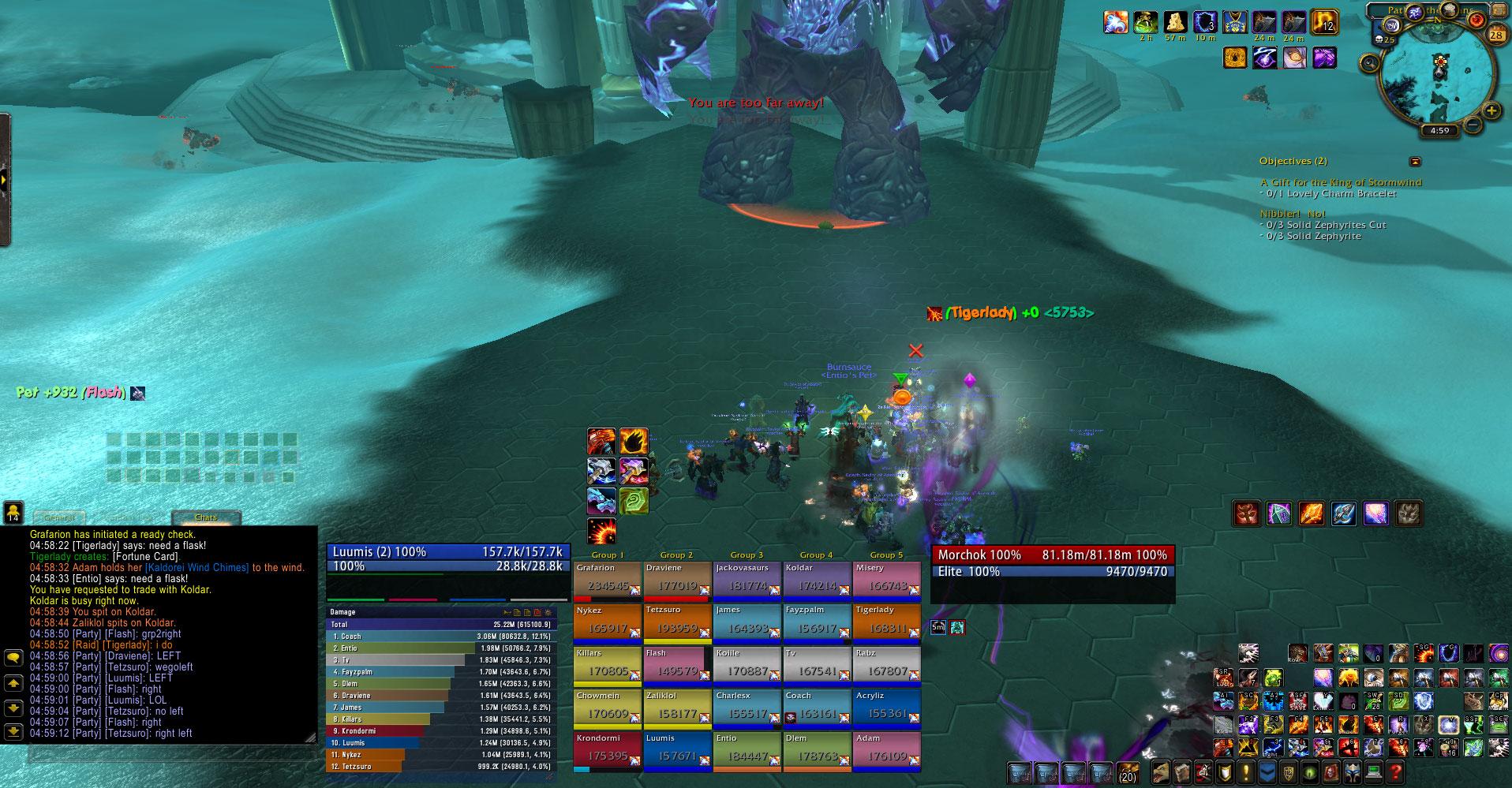 We continued through Dragon Soul with our customary wipe on Zon’ozz because people failing to bounce the orb properly as well as forgetting to kill all of the eye tentacles.

One of my favorite parts about raiding with vodka is the chatter that happens during trash. Trash sucks, there’s no doubt about it, but when you have chats like this they’re not so bad.

The second day’s raid was probably our best yet this tier as well as our most boring one. We literally cleared the whole of DS in a little bit over an hour and ten minutes.

After raid, the officers made some announcements about what the raiding schedule will be like for the next two months. While I am not at liberty to go into details about what exactly we have planned for raids, you can expect cool content as well as streams to watch for while it happens. This boring period of farm content might just get more exciting!

My year with vodka

With what happened in raiding this past week done, now I get to embrace the old man in me and reflect on what the last year with vodka was like for me.  When I joined a year ago March 6th, I had the monumental task of proving to the guild that a dps shaman was worthwhile to have in the guild. Vodka had not run a dps shaman during progression since Ulduar. I believe Mushi was said shaman and the star of an old vodka recruiting video.

On my second day with vodka, Grafarion made me transfer an alt to participate in the alt raid. At the time, I remembered thinking what guilds force that on applicants? Well thankfully, I transferred my alt druid as soon as possible in order to sit on the bench for the alt raid.

During this time period, my recruiting brothers at the time were Zalik, Chowmein, and Entio, and we were often at the butt end of applicant hazing. Here’s what Acrylic told me one time when I was offering him some shaman advice:

In those days, Linyu, Lupita, Acrylic, and Oveh would heckle the applicants hard if they ever made a mistake. During those good old days, Grafarion would threaten applicants if they disconnected or fatal errored one more time that he would gkick them. Nowadays though these guys have either left or gone a bit more soft.

Don’t think that all of our guildies have gone soft since content is on farm status. I once saw our silent, but strong champion demonology warlock Jackovasaurs in Durotar and this is what he told me:

In Firelands, there were a lot of both really great and really frustrating moments. One of the earliest bugs we encountered was on Alysrazor. Raid frames would bug out and we wouldn’t be able to heal certain people. They would appear to have zero hp but not dead. You can imagine how annoying that would be if said bug happened to your main tanks:

While we did get US first on Heroic Ragnaros, we were still weeks behind Paragon in getting the kill. Progression-wise, Ragnaros was probably the hardest boss I had ever done for a couple of reasons. The first was super long in its pre-nerf form. I believe our first kill took over 15 minutes long. In each of the phases, there were tons of stupidity checks that could kill people. Furthermore, since no one knew the proper strategies at the time, a ton of different raid stacking had to happen in order for guilds to get through different phases. You can see in this screenshot how we stacked boomkins in order to transition through the sons phases.

We were fortunate enough that everybody and their mother had a boomkin alt. We actually were really lucky because we had started Firelands progression with only 20 member status raiders and about 6 applicants.

The frustrations I held for raiding and Blizzard were not a Firelands only kind of thing. Raid stacking is pretty annoying concept to accommodate for when you’re trying to be one of the top guilds in the world. Not only do you need to raid stack, but you need to make sure that all of the people are geared enough to contribute. Dragon Soul LFR was finally one of the first times I truly started to hate raiding. We were forced to run LFR a million times so that 2 or 3 people would each have a chance at loot in order to get 4 piece bonuses or an overpowered healing mace. What we did was entirely legitimate. We had Blizzard devs and GMs confirm if what we did was okay. The thing that really upset me over this is when we reported the exploit other guilds were using in order to get multiple chances at loot from different raid IDs in the same lockout. We did what we always have done even on PTR whenever we find an exploit or bug in the game. We contacted a GM and a dev, both who will remain unnamed and replicated as well as fully document what the exploit/bug was for them. They gave us their thanks and went on to execute punishments to all people who abused the exploit the next days. What was truly stupid is the three guildies who helped the Blizzard staff document the exploit got banned as well! We lost two of our top DPS and our main tank. Granted we were able to split off alts from other accounts in order for them to have toons to play on during progression, but it was still a blow to us. How could Blizzard leave us out to dry like that? Especially with all of the PTR testing and help we give. We probably put in over 100 hours easy into Lord Ryolith on PTR in order to help Blizzard fine tune the encounter.

There are a ton of other things I could probably go over like losing Live Raid at Blizzcon or what it felt like getting US first in Firelands or dealing some of the trash talk that other top US guilds throw our way, but I think it’s time to wrap up my ramblings. In short, the last year in vodka was awesome. There have been plenty of disappointments with where we ended up in progression, but we’re constantly improving. Other guilds better watch out in Mists of Pandaria. We will continue to get better.