Oh boy, we managed to reach phase 4. The mysterious bonus phase that wasn't there on normalmode, which also included a new cutscene.

You got teleported to Stormwind's harbor where Garrosh had settled in after killing all the different faction leaders from both the Alliance & the Horde who were all hanging on spikes on the wall which was really disturbing and sad to see. Luckily this phase was just Garrosh's dream, the way he thought the future would be. And we had to kill him to prevent this. 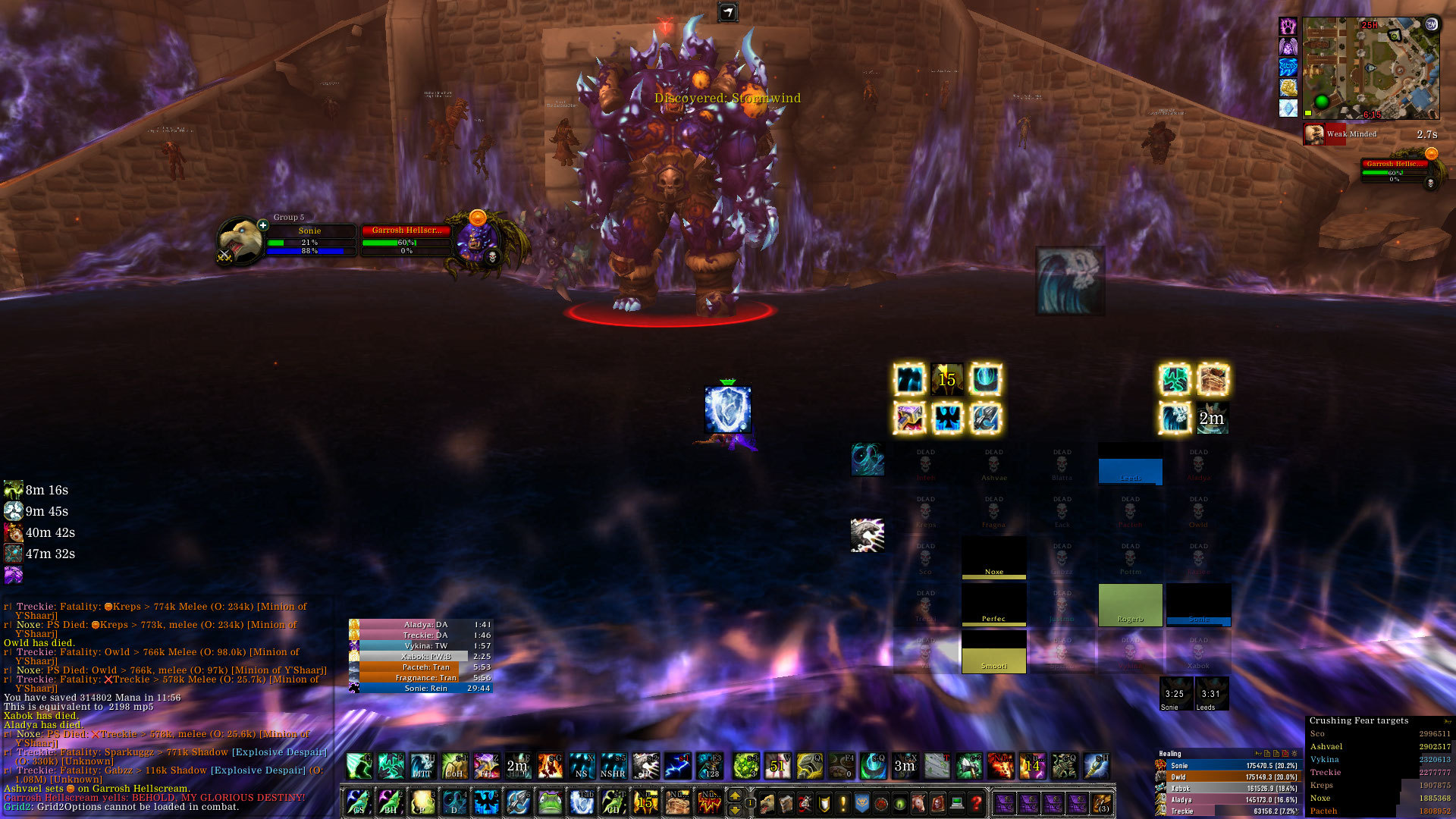 Since this was a mystery phase, nothing was written about it in the dungeon journal since Blizzard wanted it to be a surprise. But little did they know that we have a braniac in the guild that goes by the name Aladya. He checked Wowhead for spell descriptions that contained Garrosh /spell numbers near the ones used in the normal Garrosh fights and came up with this:

It was really accurate, actually. Thanks to Aladya we had a really good idea of how we wanted to do phase 4. The only thing we didn't know was what the Iron Star was good for and if there was even any point to spawn one. We tried to avoid spawning it in the start, and that's when we realized that we are gonna need it and what it's for. We got destroyed when he started spawning the Manifestation of Rage adds, it was pretty obvious that the interrupt mechanic from the Iron Star was meant to be used on this cast. 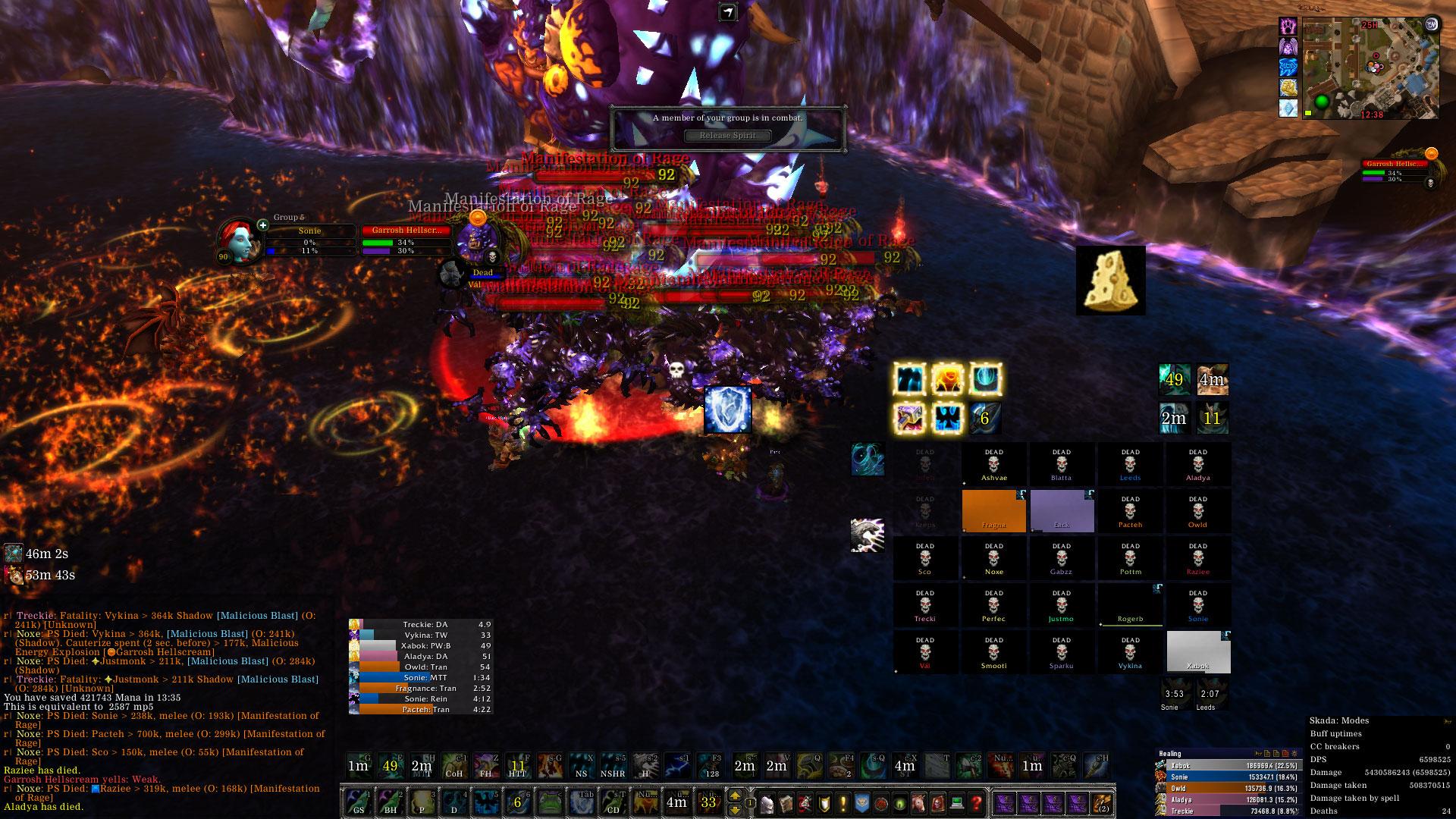 Once again we abused our rogue team. Ashvael got the important task of kiting the Iron Star and trying to time it to hit him perfectly for the cast. He did a really good job, and got the hang of it and its timing extremely quickly.

So now that we had a working strategy for the entire fight, it was just about executing it perfectly. We had a breathtaking 1% wipe 1 hour before the kill, but what happens next? Treckie's internet goes down. We have to just sit and wait for him to come back, it was extremely demotivating. But we handled it the best way we knew to, by trying to stay calm and trying to have fun as we usually have.

When Treckie finally came back about an hour later, it was time for the kill. We already had a few pulls and now it was just about executing everything flawlessly and waiting for the stars to align. Everything went really well up until p4. We actually didn't wipe in p4 that many times as we were quite prepared for it even before and, let's be honest, the last phase wasn't that challenging. The most challenging part of the encounter was to make it out of the Jade Temple intermission with 24 or less energy, spreading out and healing Empowered Whirlwing and after that killing the adds. I think many people underestimate the difference of killing them on 25m compared to 10m. There are two extra adds and they have a lot more hp so you need to start killing them instantly when they spawn and then it's a mess since there are 19 people dpsing 10 adds which causes people to overaggro which leads to adds running around a bit more. In 10m you pretty much just shoot 2 abilities on them and they are dead on their spawning location already, no risk of them running around and buffing each other.

Phase 4 went relatively smoothly except when the 2nd Bombardment came, we spawned an extra Iron Star and if you've seen our video you know what happens next.

Despite the issues with that Iron Star we managed to bring him down with only one man last standing. Garrosh has finally been defeated and Azeroth was once again saved, thanks to us, the brave heroes! The expansion was done, and we managed to finish every single content as the #1 guild. We had broken what Starym describes as the curse; that no guild could win every single patch of an expansion, they would always choke on the last one.

The Future of Healing Method

With the Siege of Orgrimmar review done, what is next for me and Healing Method? Well, the name kind of gives it away. Finally I can get into what I'm really passionate about, healing. Which was also the original intent of the article series but I got asked to write about our progression first.

I'm away for a week now skiing so the next episode will be in 2 weeks and the topic will be something healing related.

Thanks for all the good feedback for the SoO articles, it really made it a lot more fun to write it. I love raiding on the level that I'm doing and it's really nice to know that people find it interesting and enjoyable to read about how we actually do what we do. Much love!