Hello again! This will be the final episode of this series of progression articles. Mannoroth was dead and we could see the light of the end of the tunnel. But we were not there quite yet. We had one of the most difficult bosses ever created in World of Warcraft ahead of us and personally one my favourites. We reached Archimonde on Tuesday evening and we had some very important hours ahead of us. We weren’t expecting Paragon to kill Mannoroth that day as we got some intel that they went back to do some more heroics before the reset if I recall correctly. This meant that it was only us who could get some extra information before the reset ended. And as a consequence we knew what classes would be good for dealing with X mechanic so we could focus on gearing that the following day. 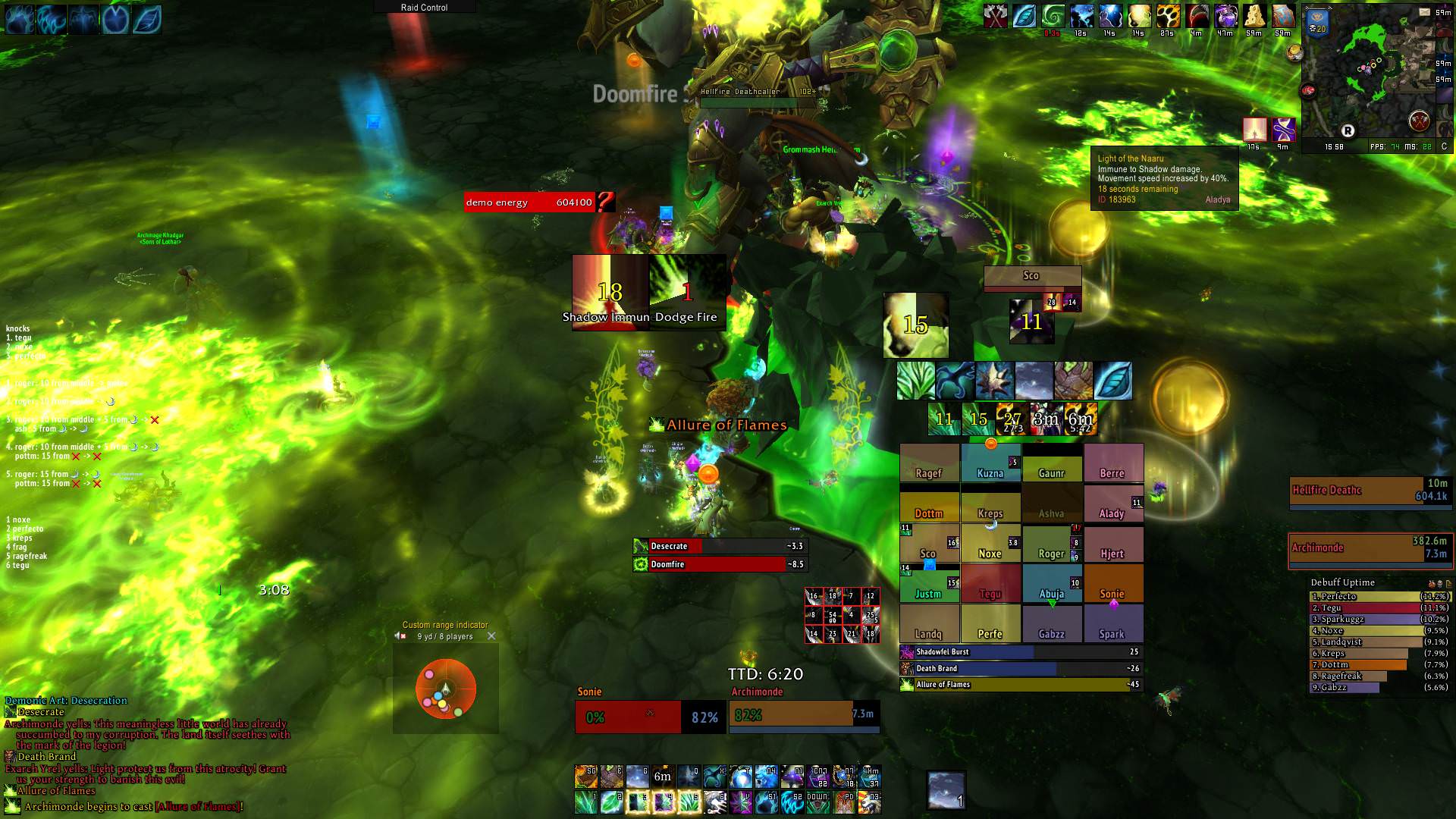 It didn’t go exactly the way we expected it to go however. The Doomfire damage was definitely not a joke before the hotfix. If you aren’t aware of the Mythic version of the Doomfire let me explain it briefly. When Archimonde casts Allure all current Doomfires will explode and kill the raid. However, you can prevent them from exploding by running into them and picking them up. This would leave a debuff on the person soaking it which did extreme damage, and it blocked us from doing any real progress before the reset.

I remember reading a lot of people claiming that the race was basically over because we got to spend these few hours before the reset on him. That was far from the truth. We never reached phase 2 even, it was unfortunate that Blizzard let it go through like this and even more that it took them 4 holy paladins to realize how broken it was. We definitely had the potential to pull ahead a lot here, but we couldn’t because of the broken Doomfire. So what was it about holy paladins? Well, before the hotfixes it was kind of the only realistic way to deal with the Doomfire damage. You would rotate Hand of Purity on soakers so they basically took no damage.

So next reset we planned for this by bringing 4 holy paladins. As I didn’t have a holy paladin this meant that I had to sit, but luckily it was hotfixed quite quickly when Blizzard saw what we were doing. With 4 holy paladins we started getting into p2, but it wasn’t very consistent as we lacked some dps. After these fixes it was a bit easier as we could switch the setup a bit to focus more on damage, for example I was damaging fully in p1, only starting to heal before the 3rd Allure. It really was extremely well tuned for this week with zero legendary rings. 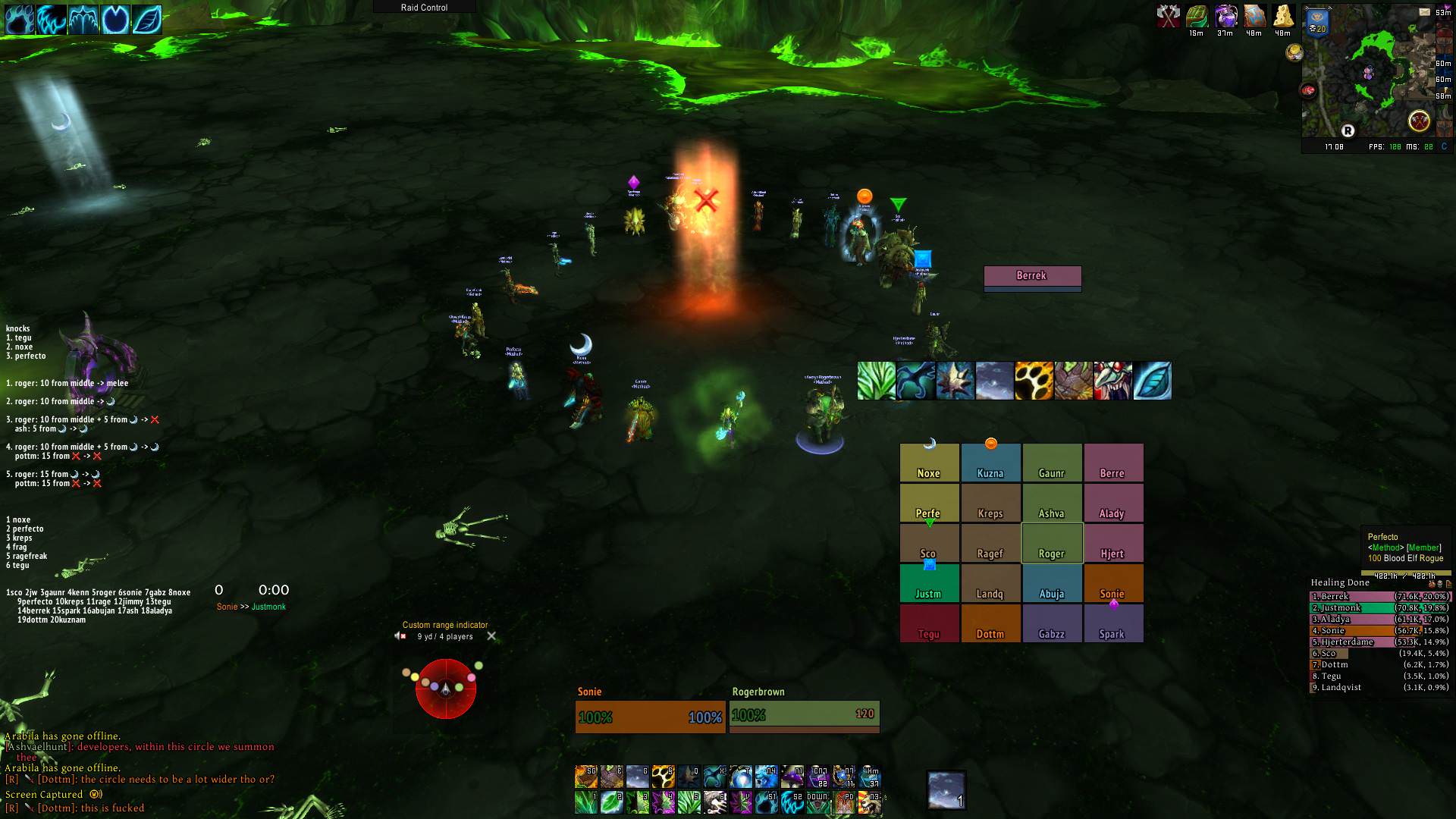 Circlejerk summoning our lord Cthulhu to assist us... or practicing the egg positions?

It felt nice to reach phase 2 more consistently, but now the next challenge was ahead of us, the lazers. We quite quickly came up with a doable way to deal with the mechanic, it’s basically the same way that Paragon does if you have seen their video. Everyone gets a number and you stand in an “egg” formation. It was an alright strategy and it was working okay. However it caused some troubles when the adds came as people needed to step away from them and this destroyed the egg formation and killed people.

It’s here that Pottm started developing the god WeakAura. We switched our strategy accordingly and we could stand on two lines in front of each other and if someone had to readjust, they would only do it on their lines. This way the lines direction would never get changed and you wouldn’t cause a chain reaction for others where they needed to readjust. We still had fixed positions of course but it was easier to readjust thanks to the WeakAura. 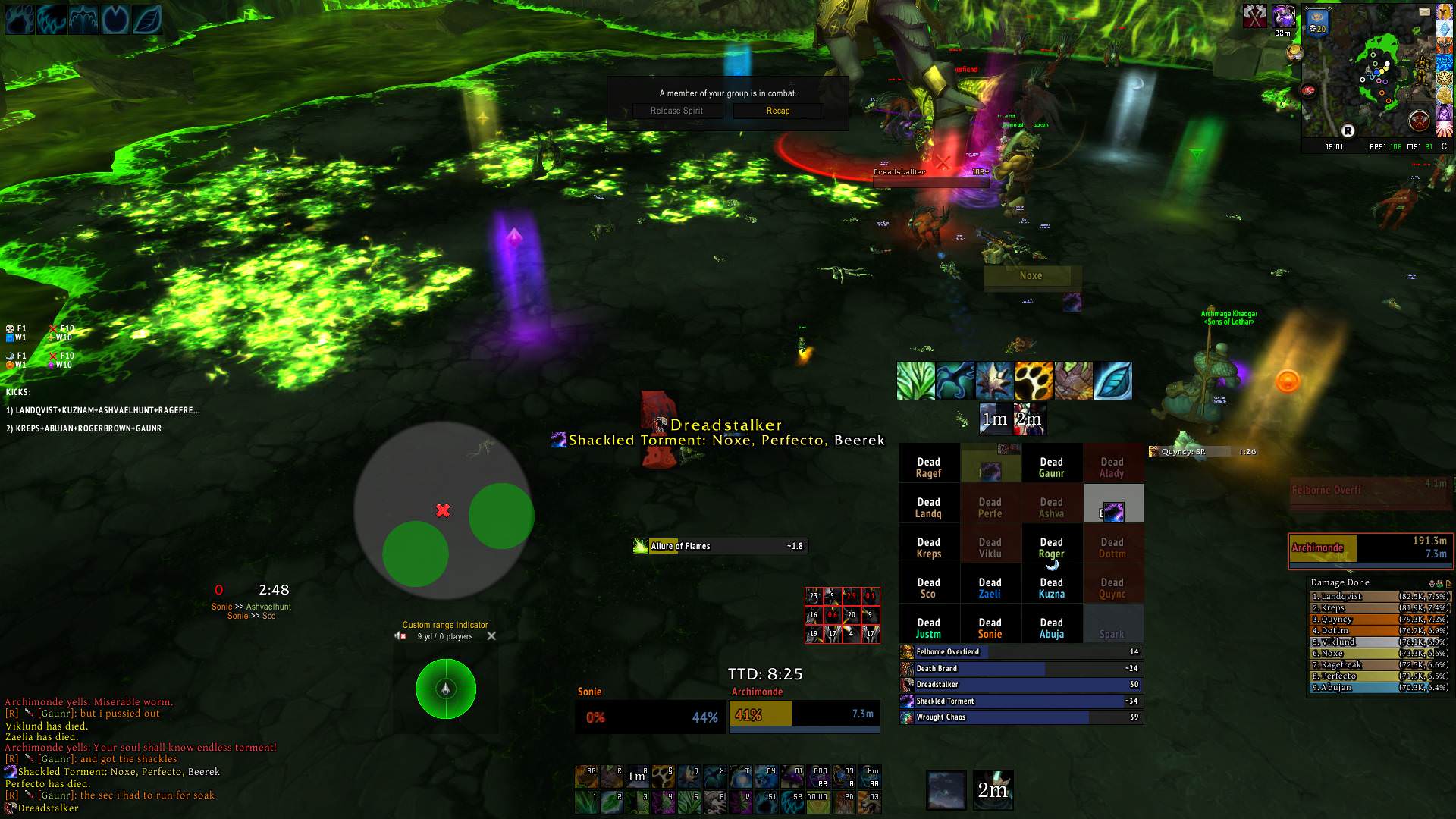 We started doing nice progress and by the end of the 2nd reset we started reaching phase 3. We were wiping around 30% at the end of that week. However, at this point real life started to catch up to us and we decided that we would not start early on the Monday and Tuesday and instead start early on Wednesday to start progressing again on Archimonde with a fresh week of gear. We quickly cleared up to Archimonde again and already around lunch time we killed Mannoroth again and were back on it. 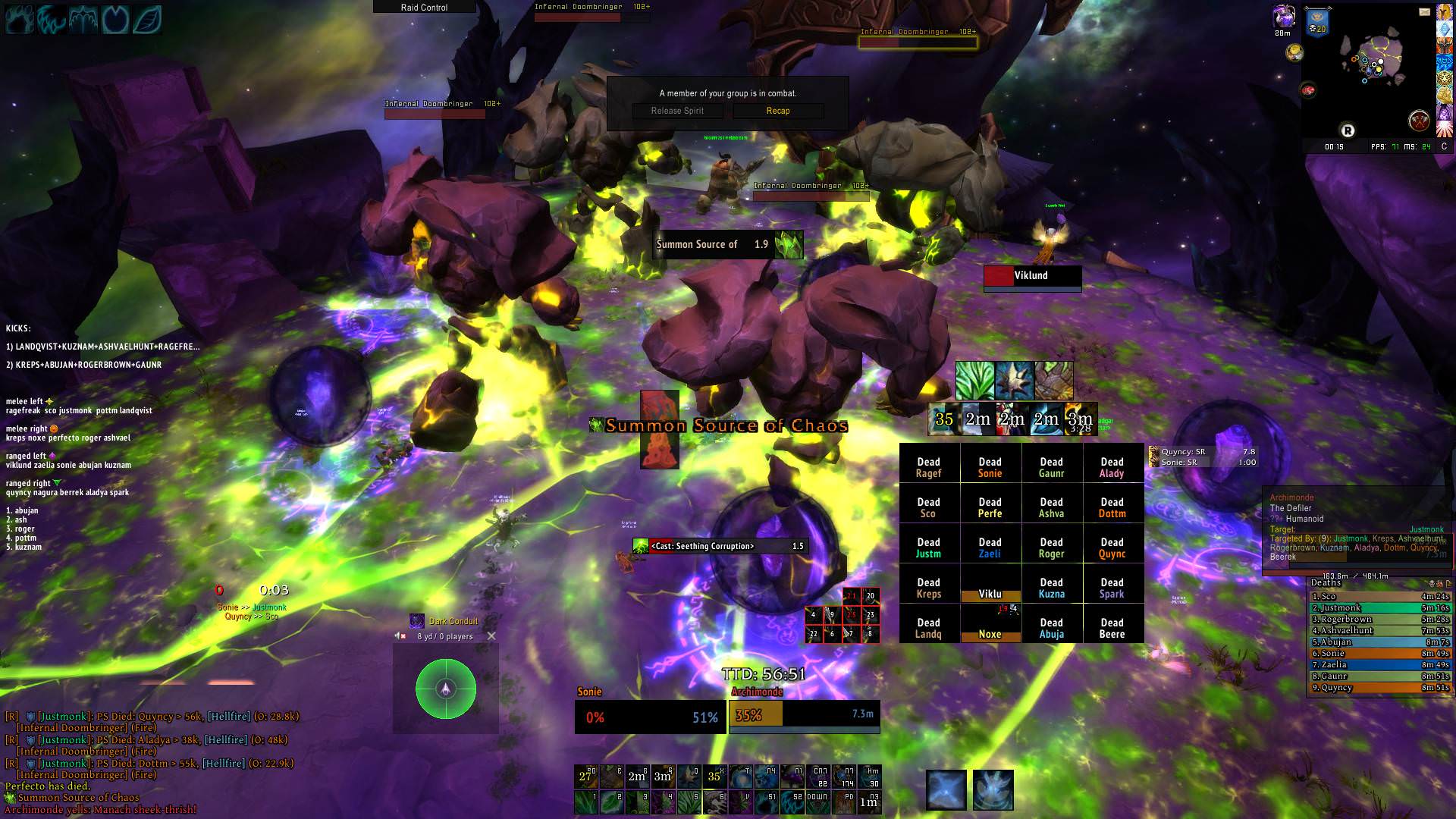 The extra gear helped a lot but we were really unlucky this progress with legendary rings. Our competitors managed to get rings, while we got zero. But we felt quite confident that we were ahead of Paragon as they changed their setup once again this reset with gearing up a fresh mage, which meant they couldn’t be as far as us.

We were a lot more consistent now in phase 3 and we managed to wipe to Archimonde’s enrage on Wednesday. On 21% he turned red, oneshot us and we started laughing and some of us started to believe that he would die on 20% or switch phases and you had to get him to 20% before he enraged inside the Twisting Nether. Obviously this wasn’t the case but luckily Blizzard was watching this attempt and after this we never hit the enrage again. We started wiping on sub 20%, and then had two 3% wipes. 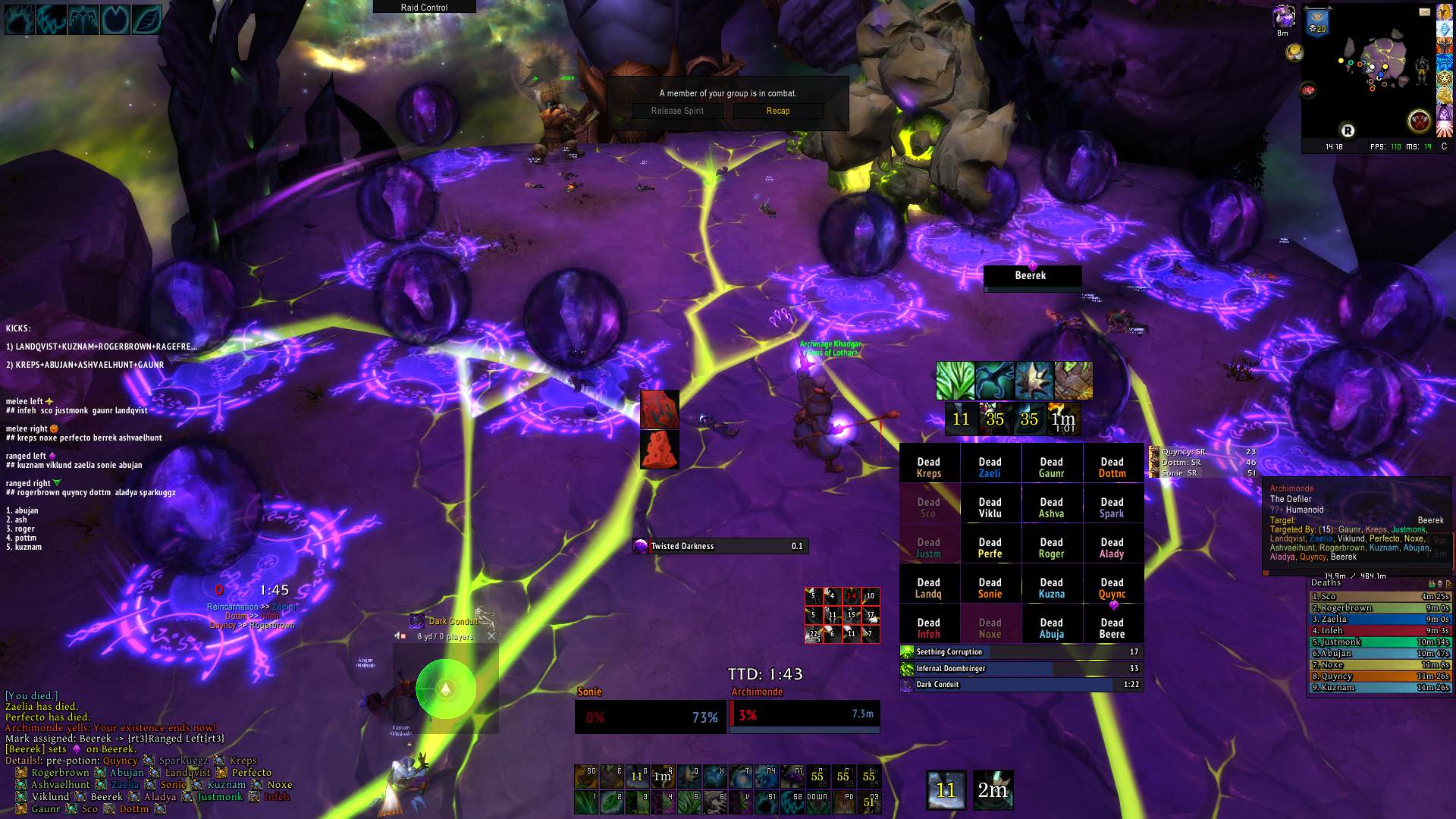 On Thursday, the day of the kill, we were pressured by time. Apparently it was Kuznam's mom's birthday and he had to attend a party. On Lei Shen it was an appointment for a haircut and now this... But it seems to be working really well for us as a motivator as Archimonde died 1 hour before he had to leave for the rest of the day. So Kuznam got to celebrate his mother and the rest of us got to celebrate another world first, everyone was happy! Archimonde died after 472 wipes.

I want to thank you guys for reading my progression series, it's been a long road and I hope it was still entertaining after all these episodes. Please leave me some feedback for what I can do better in the future if I would type another one of these. This isn't the end of my articles here though. I will try to transition back to more healing related entries, so stay tuned for that. Until next time friends!