Greetings travelers. Today we continue from where we left off last week. We had just killed the first wall of Hellfire Citadel, Gorefiend. It definitely came earlier than I had expected but personally I was very happy with it, if a bit disappointed with the difficulty of the following 3 bosses: Iskar, Socrethar and Zakuun.

Let’s start with Iskar, the loot pinata of the upper part of Hellfire Citadel. I think the developer of this encounter wasn’t really aware of how far ahead addon and WeakAuras developers are. The most interesting part of this Mythic encounter were the chains which we and most guilds completely trivialized with WeakAura. If you aren’t aware of this ability, iIt puts a black circle around 8 random players and if they don’t get rid of it before the debuff timer expires then they get instantly killed. Players with the debuff are ”secretly” linked to one other person who also has the debuff, and to get rid of it they need to stand on top of each other. The difficult part is that you have no idea who you are linked to unless you are holding the Eye of Anzu. And to make it more difficult, if you come in contact with any other black circle who isn’t the one you are linked to then both of you instantly die. This was how it was supposed to work. But the developer wasn’t clever enough and decided to apply the debuff in the order of who you are linked to. So it was very simple to see in the combat log who was your ”partner”. So we basically had a WeakAura ready already from the PTR that tells you who you are linked to so you didn’t need to throw around the eye to find out. This got fixed the following week but already so many guilds killed this boss using it so it was basically too late. But I guess the developer learned his lesson and won’t make the same mistake again. 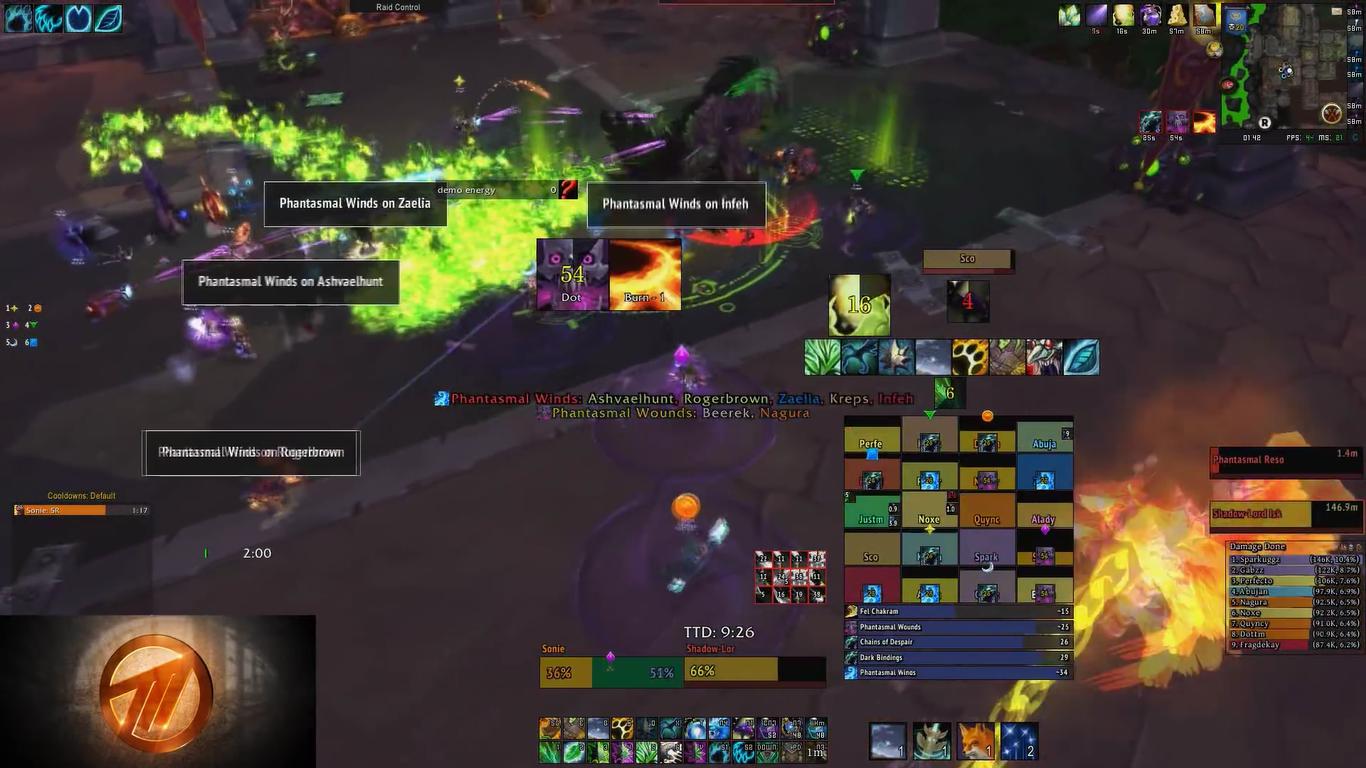 The boss fell over without too much issues after 5 pulls, and now the question was which boss should we choose first? We were the first guild in the world since Gorefiend so we couldn’t get any hints on which boss was easier. Xhul’horac was out of the question since we expected him to be difficult from our PTR testing so the choice was between Socrethar and Zakuun. We decided to go with Socrethar as the mechanics didn’t seem too difficult to master and it wasn’t really a dps race compared to what Zakuun's last phase potentially could be.

Socrethar started out a bit messy for us and we did actually run into one bug on this encounter. Initially, we didn’t know you could stun the adds and kill them off, so our first strategy was to kite them forever. Well, let’s just say it was a terrible idea. But after a few pulls we found out we could stun them and nuke them below 50% and we quite quickly reached phase 2 while doing that. Phase 2 was quite easy if you didn’t mess up on interrupts, the only ”difficult” part was positioning with the debuffs, as you wanted the ghosts to run in a straight line obviously, but I wouldn’t really call it hard. With the gear we had available we decided to do it in two phases instead of one, which caused some problems. 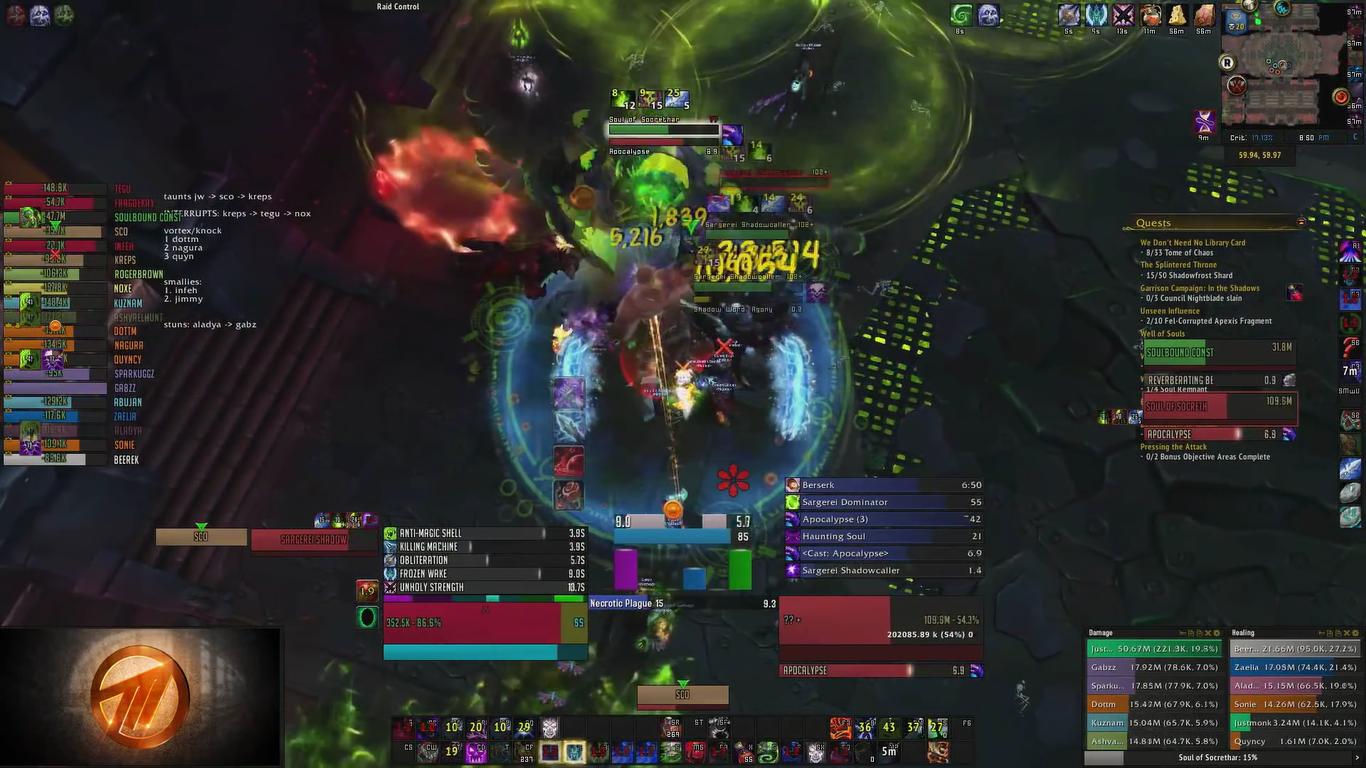 There was a bug where he wouldn’t properly switch from phase two back to one. Ideally you wanted to transition a few seconds before the phase two debuffs disappeared so you wouldn’t have to do phase one with them. So that’s what we tried to do. The problem was that even though we clearly were in phase one, he decided to give us new debuffs and spawn new ghosts. This wasn’t viable of course and we ended up wiping. I believe we ran into this bug 2-3 times, but we decided to transition a bit earlier with different timings which ended up being a temporary fix to the problem and Socrethar fell over after 19 pulls.

The next choice was obvious I believe, even for spectators with not too much experience. Zakuun was probably one my my favourite bosses even if it wasn’t too tightly tuned. It was just so much fun to heal in my opinion and if you had a blink it was even more fun as you could do some fancy stuff with it during seeds. The difficult part of this encounter was that more people had to do what the tanks had to do during HC difficulty, namely go inside and jump over the circle and at the same time dodge the waves. Each time you sent people in however, it got more and more difficult and we quite quickly realized that we can’t send in people during the whole encounter. We did some napkin math and came up with that it was possible to send in only two waves of groups. The difference in Mythic is that the debuff after you soak a pillar is a debuff that lasts forever unless you go inside where it gets cleared. 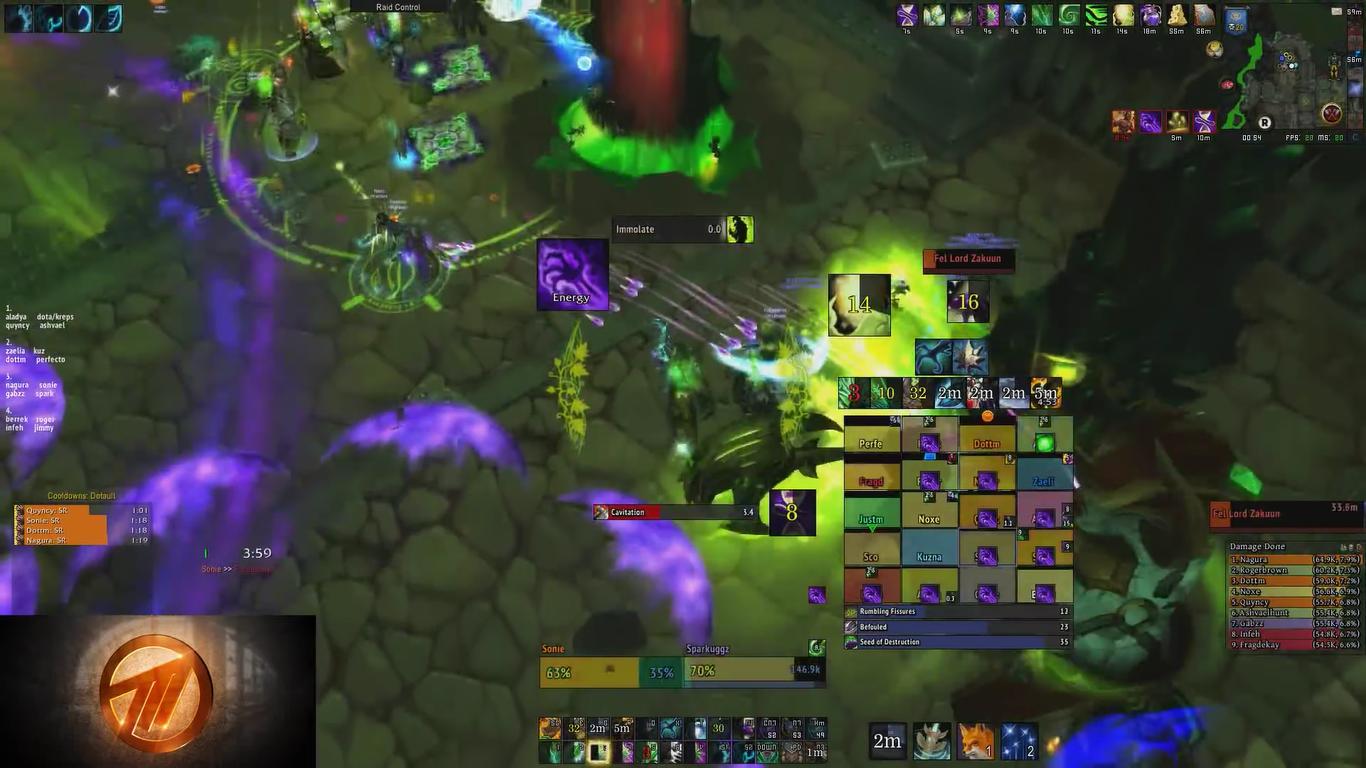 So you wanted to send in people as short as possible while still clearing enough debuffs to be able to soak pillars. We had prepared four groups of soakers who were responsible for different pillar soaking. But since the first two groups cleared their debuff we were able to soak six waves of pillars in total, which turned out to be enough to kill Zakuun before we had too many pillars up to be able to protect them. Once we reached the last phase and popped Bloodlust, he literally melted like ice cream in the sun. Fel Lord Zakuun died after 32 pulls.

That’s it for this week, next week we will get into the serious business. Xhul’horac and Tyrant. I haven’t decided yet if Mannoroth and Archimonde will get a seperate episode or if they will be together in one. I will find out when I write about Mannoroth and when I know how long that will be.

See you then and have a good one!