Welcome to the next and the final episode of Blackrock Foundry progression, Blackhand is what's on the table for this entry. The big badass leader of this foundry, and did he live up to his badassness? Continue reading and you will get my opinion on it!

As mentioned in the previous episode, morale was extremely high after our strong performance on Blast Furnace. And personally (others may disagree) I believe that if we hadn't killed Blast Furnace before Paragon then that potentially could have changed the outcome on Blackhand. Maybe I'm over exaggerating a bit since we did in fact kill it 5 days before Paragon, but if we took as long as Paragon needed on Blast Furnace then maybe we wouldn't have realized quick enough what setup and classes we wanted to use on Blackhand and that definitely could have had an impact on the rankings. But the biggest reason why I think Blast Furnace was so important for us was morale. It was actually our first real victory over Paragon this expansion. Yes, we did kill Butcher before, but it was because they continued focusing on Imperator only. So I think everyone realized that Paragon wasn't unbeatable. And this was a huge motivator, a chance to finish a tier having beaten Paragon without all this 10 vs. 25 bulls**t.

Anyways.. Once we reached Blackhand, as with most end bosses, we got a big surprise. The damage from the demolition was massive. And at first it seemed like you wanted to use 6 healers to be able to deal with it, but after being able to survive them we realized that there was no way that we would be able to beat the soft enrage in phase 1. Lava comes flowing from the side and you don't want this lava to reach the center. Trust me, you will all die. We timed it, and realized that we would need to survive 3 demolitions maximum, after that it was over anyway. So now we could start focusing on surviving these 3 demolitions with as few healers as possible. Eventually we decided to go with 4. The power of raid cooldowns is still insane. Is it good or bad? Well I guess it's individual taste, whether you like it or not. Personally I don't. What do you think? 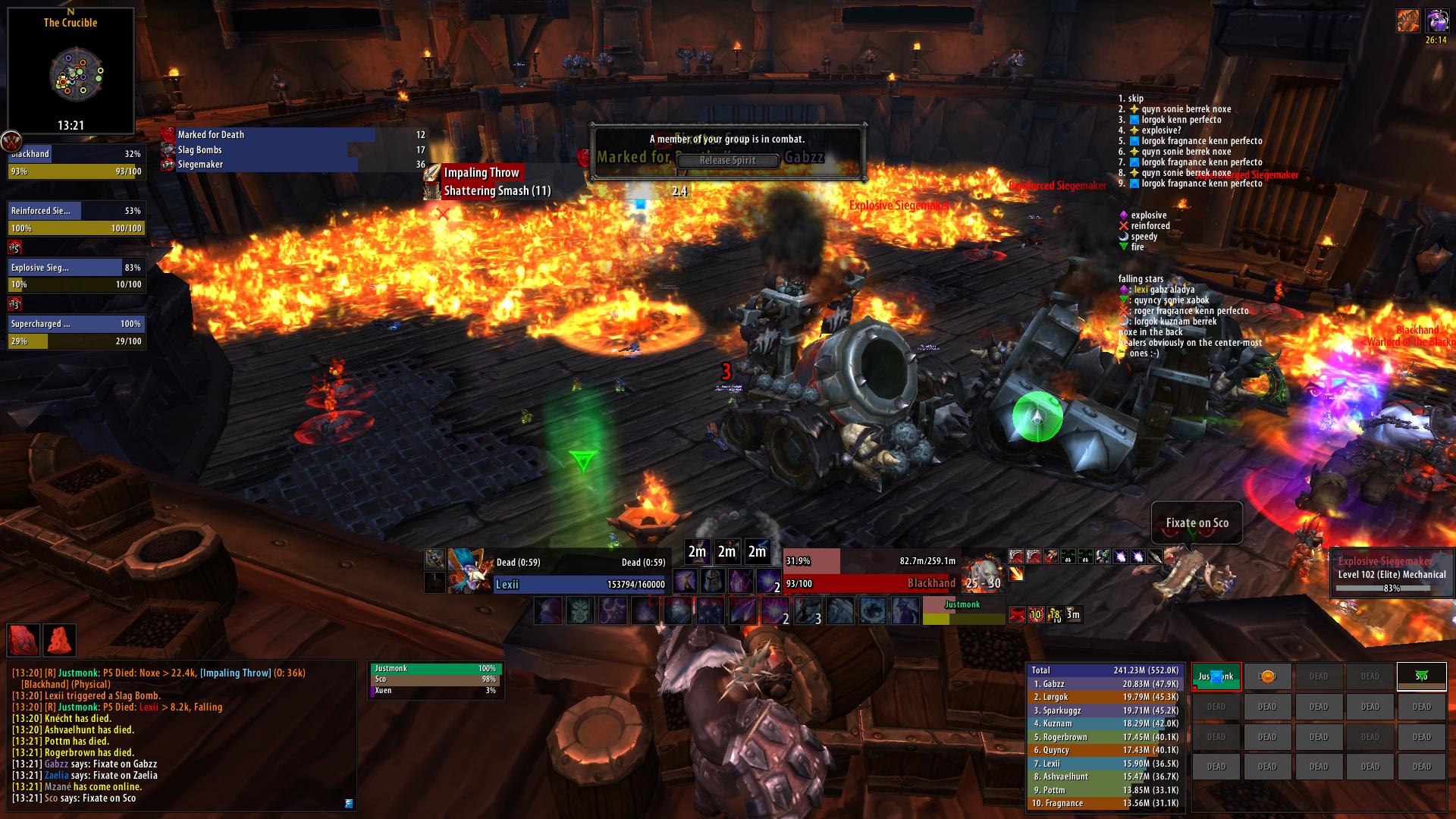 We managed to reach phase 2 with Bloodlust in the start, and we could start practicing and decide which siege to pick when. There was a lot of debate here and I remember some fun stuff we tried to do to deal with the explosion from the Siegemaker when it exploded. We even tried to all jump when it went off, it didn't work. :(

Once we reached phase 3 we realized that we really would prefer to use Bloodlust there, so we started doing everything we could to maximize damage in phase 1 so we wouldn't have to use Bloodlust. It worked but was extremely tight, it was really awesomely tuned for the amount of gear we had. Just 1 less overall ilvl on the raid, and I actually doubt we would have done it, not unless the stars aligned and everyone critted nonstop. Sometimes we even failed the damage in phase 1 and would then painfully die on the 4th demolition. If you saw our video you can actually see this very clearly, as we barely made it out from phase 1 alive, the 4th demolition started but only 1 big nuke had time to come, and we barely survived. One more second and we very likely would have been dead. Which is why in the video Rogerbrown thought it would be a wipe, but obviously he was wrong! :D It's amazing to fight this well-tuned bosses, and I wish that more guilds had the chance to do it. Doing a boss with just a few more ilvls than what it was tuned for really makes it a lot easier and more boring. 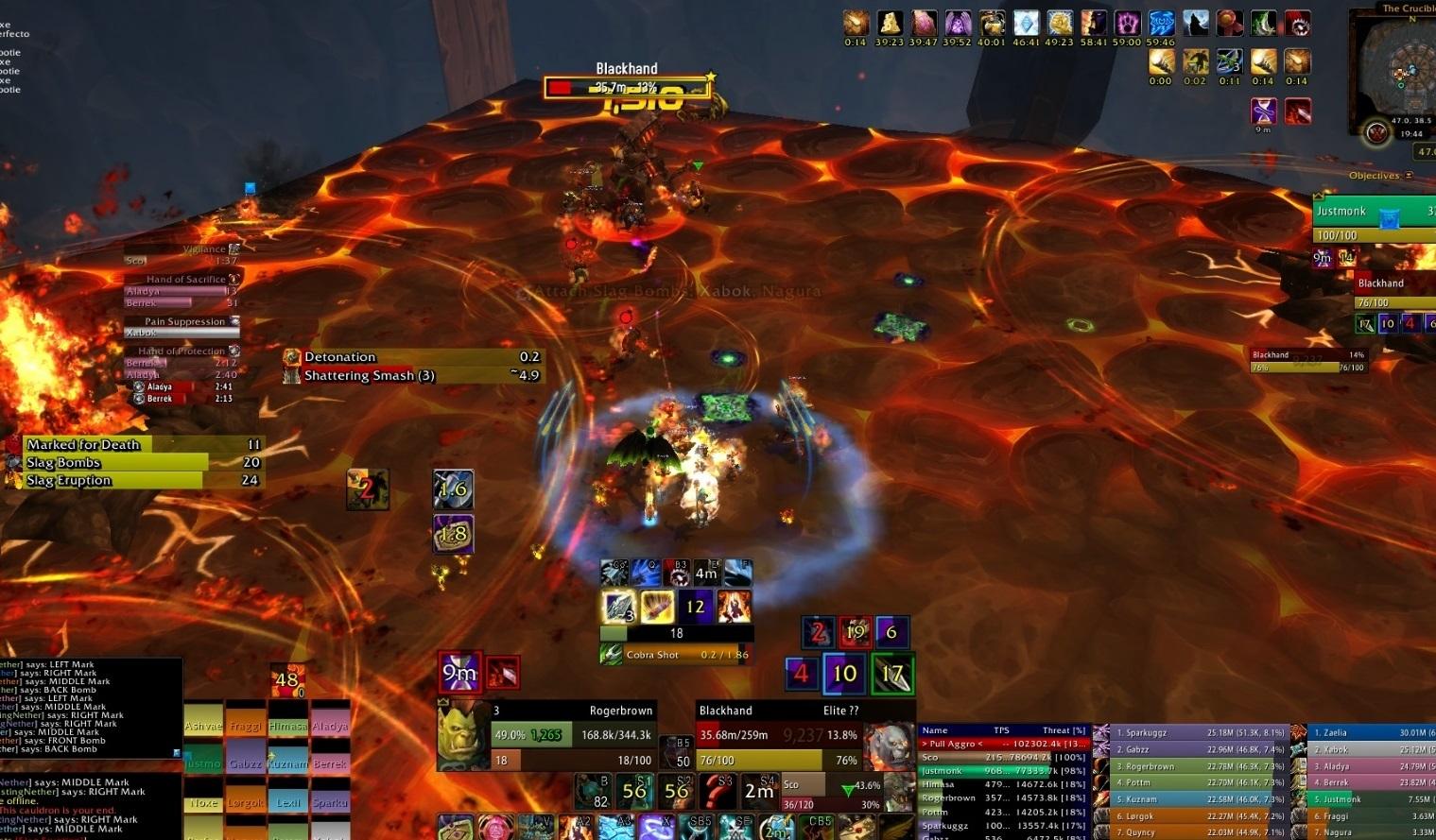 When we managed to reach phase 3 with Bloodlust ready and everyone alive, it didn't take us too long get him to a very low %. And from there on it was just a matter of time before he went down. But surprisingly the last 7% was a pain in the !"#¤%. We really struggled with having enough healing to keep everyone alive at this point, all raid cooldowns used already and healers were sweating and wishing the boss would die early, like Ra-den! Sadly it was not the case here. We had to try to delay the raid cooldowns a bit and try to be more conservative with them, and eventually it worked out. 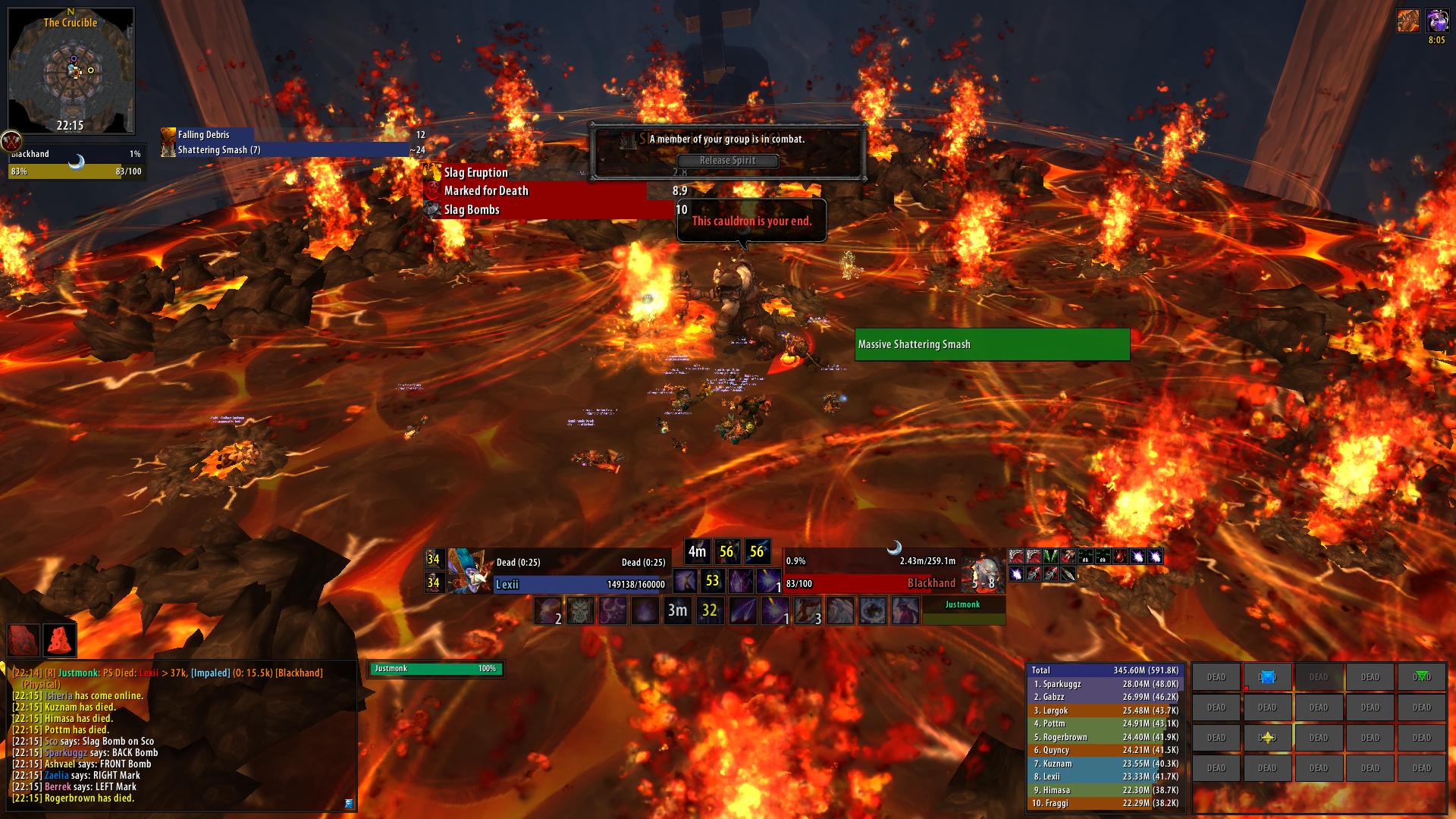 After a lot of frustrating wipes like the one above. Blackhand finally went down, and we had achieved everything that we wanted. We were once again the best guild in the world, and we showed the skeptical people who didn't believe in us versus Paragon. We showed them that we actually are the superior guild and we weren't just the best 25m because Paragon was 10m like some foolish people claimed. Personally I believe Blackhand was quite a cool end boss. He filled most of the criteria that I liked. With it taking us 325~ attempts, and over 600 for Paragon I think we all can agree that it was a difficult boss, on the level on Ragnaros HC, which took around the same amount of pulls for Paragon. It had three completely different phases, with each phase having something new and unique from the other versions, it was difficult to heal, especially in phase 3 with the nerfed amount of raid cds and you had to actually play really smart with them. But most importantly, it wasn't a 14min+ fight. For some reason Blizzard has a habit of making the last boss super long... I have no idea why, but it's extremely boring. I'd rather have a shorter fight, being difficult from minute 1, than only difficult in the end. Blackhand was definitely difficult from minute 1, with the amount of gear we had available during our progression. I believe this boss will go down in history, a boss that people will talk about when they want to mention difficult encounters. 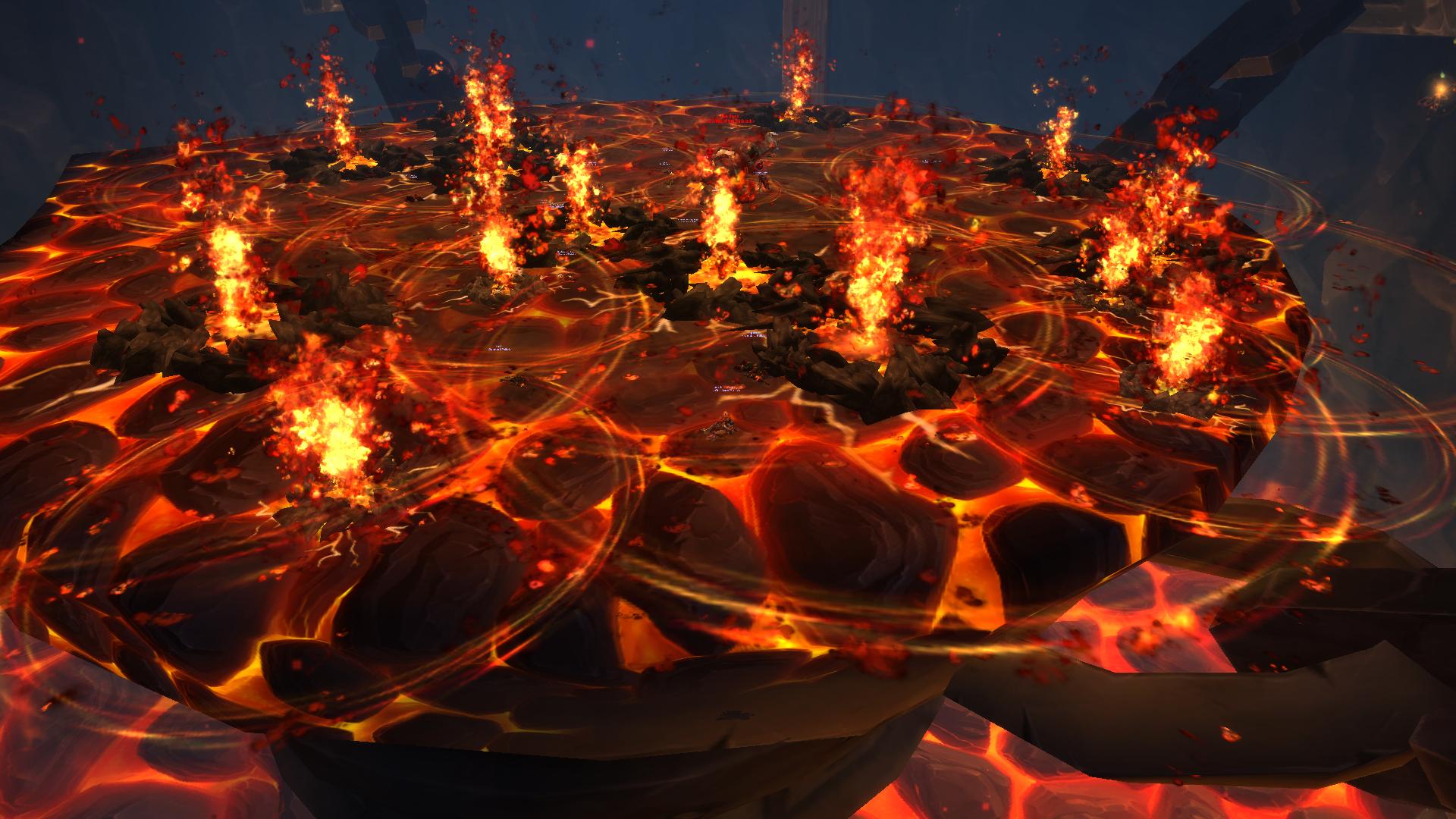 Now it finally was time for some real relaxing farm time. The period between Highmaul and Blackrock was in my opinion not a real farm period, as it was such a short time in between and there wasn't much time to do all the preparation needed for Blackrock Foundry.

As for the articles, I can finally start typing about what I originally had planned for them to be about, healing. For the next one I will most likely discuss the state of healers going into WoD, how strong each healer is and why. I would also like to discuss problems that I believe need a look at to make the healing game more fair and exciting for every class. But nothing set in stone, I have the freedom to type about what I feel like typing about, and this is why I enjoy typing these more healing related blogs so much instead of a pure focus on progression. But of course I enjoy telling you all about Method's adventure in progression as well!

See you next week, have a good one!