Healing Method: Blast Furnace - Nine Down, One to Go

Welcome to the next episode of my Blackrock Foundry progression articles. Last week we were talking about Kromog, Operator Thogar and the Iron Maidens. As you can calculate then we got 2 more bosses to talk about, and also the most exciting ones.

After a lot of fail with strategy on the Iron Maidens we were far behind everyone, especially Paragon who not only killed the Maidens before us, they also cleared heroics. But we didn't let that bother us too much, we realized that it was a strategy failure and not bad playing, so we knew there was still a chance to catch up if we played well. We first decided to clear 3x heroic raids as we expected Blackhand to survive this reset anyway, so the heroics needed to be done at some point. Why not now then, and have some extra items to help progress on Blast Furnace. I don't want to waste any time typing about these heroic raids as this is about mythic, but at least you know that we did it. 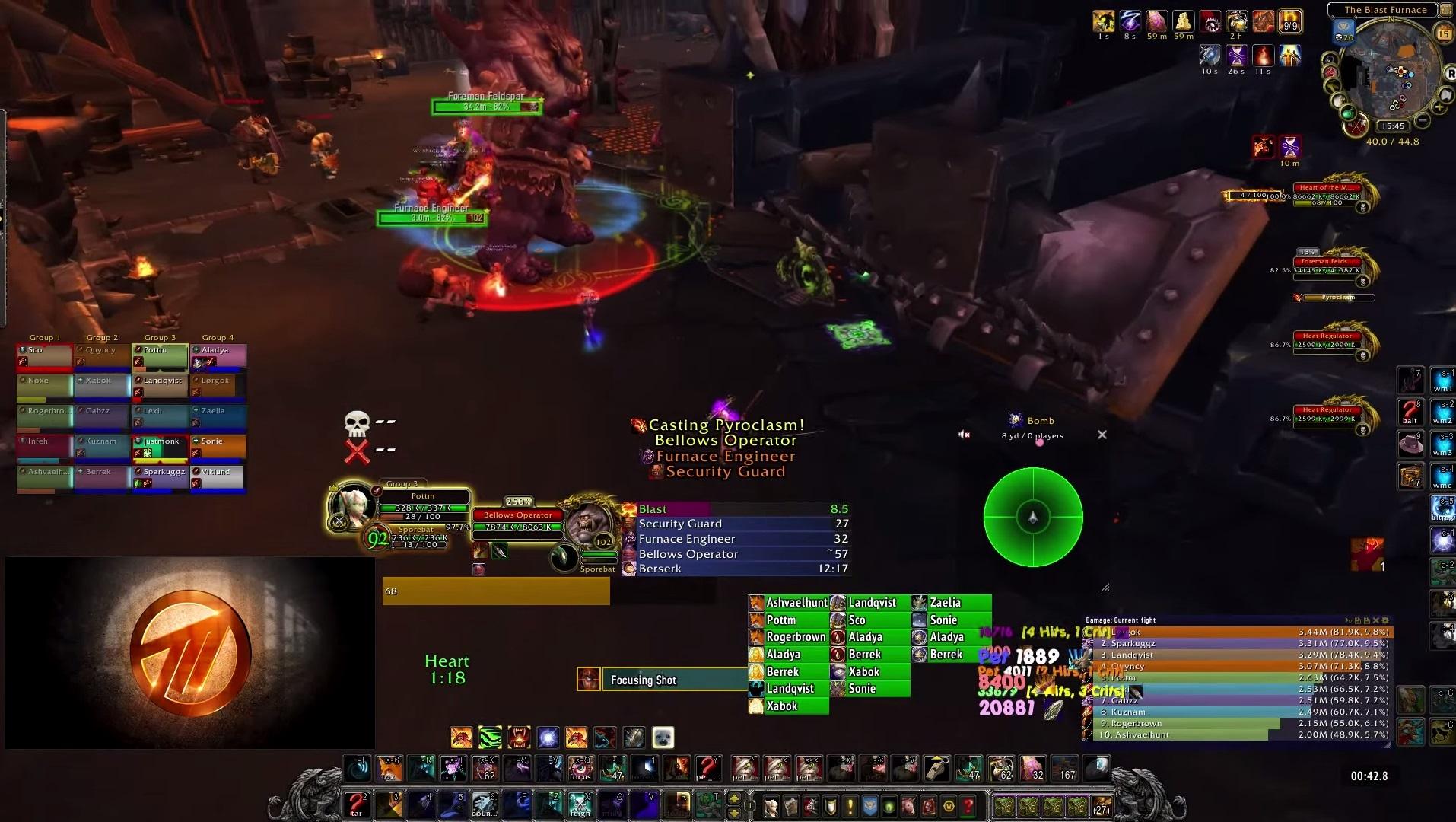 Blast Furnace was definitely a difficult, fun and interesting encounter. Having smart strategy-minded people in the guild was worth more than gold. It didn't take us too long to reach phase 2, but it really was a mess. The boss energy was already extremely high and us healers quickly realized this strategy wasn't going to work, we ran with 5 healers and having 100 energy already in phase 2 seemed impossible at the time. We calculated that each healer needed to squeeze out about 90k hps for about a 5 minute period, the only class that potentially could reach somewhat close to this was OP resto shamans. The rest of us could do around 70k. So after a lot of discussing and calculations the healers said, “no, this will not happen, we need lower boss energy”. The guild listened and we went back to the drawing board. We tried to make our phase 1 as efficient as possible. And oh boy, we quickly noticed now that it really was doable. We got out from phase 1 with around 32 energy, whereas before we exited it with maybe 70. 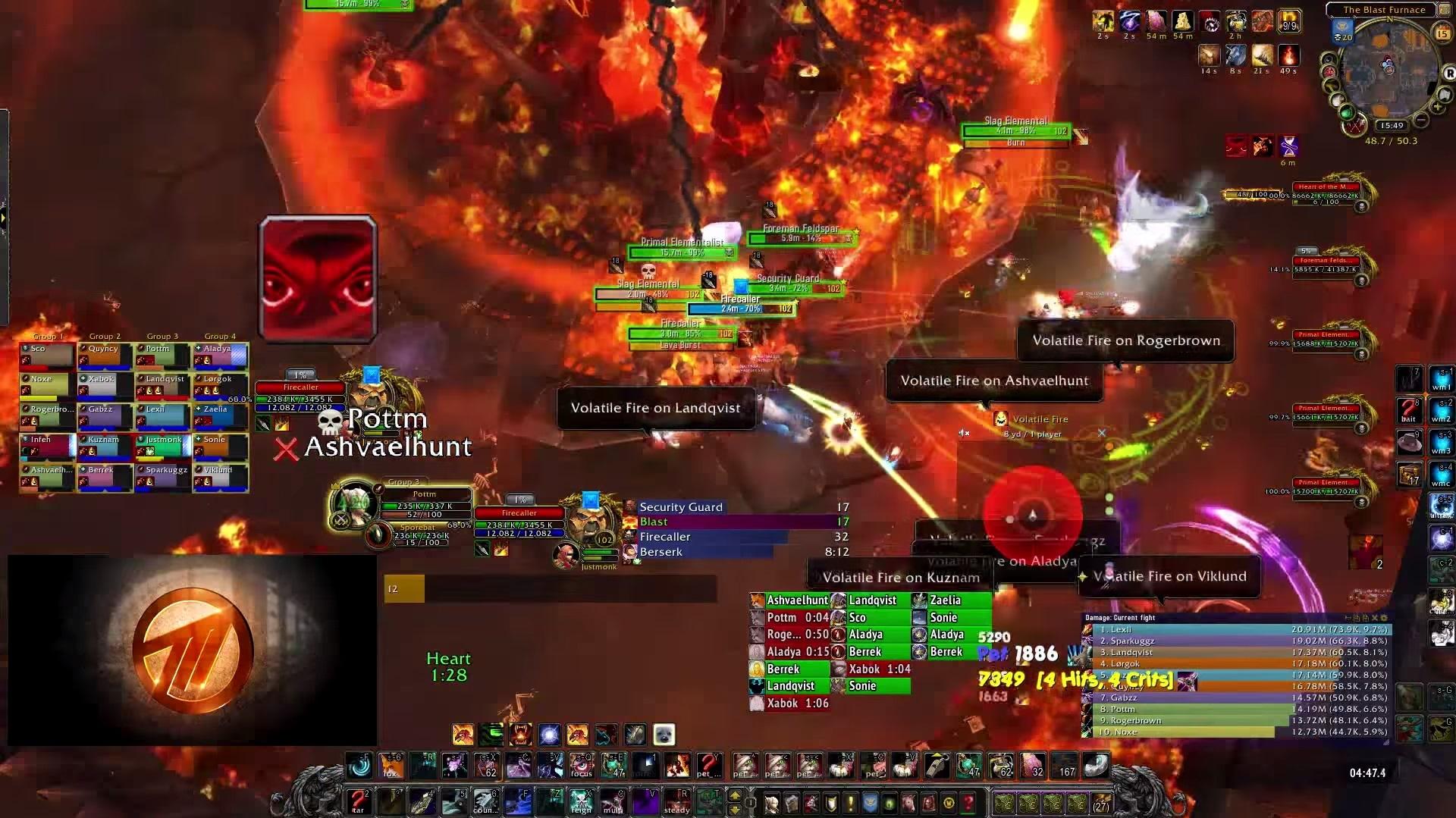 Phase 2 was fairly straight forward, we decided to kill the Primal Elementalists in two goes, and we were okey with that, we knew that with our new phase 1 boss energy, we had a lot of time in phase 2 before reaching the soft enrage. The only really difficult thing was the Firecallers, we tried to CC them all and to kill them all and ended up doing a mix of both. When we reached phase 3 with our new phase 1 strategy the boss was around 90 energy, and from there on it was very easy to kill the boss. I think we wiped in phase 3 less than 5 times total, and our total wipe count was 120. So I guess that shows how much easier the encounter was once you knew the strategy. How vital it was to leave phase 1 with low energy because in phase 2 you couldn't really control it, it kept ticking up slowly. Of course you could kill the Firecallers in one go, at least one time with all cooldowns, but we actually never even tried that as we didn't see it as viable. It was actually pretty cool to see Midwinter doing it, so props to them!

We had redeemed ourselves, we were once again back in the driver seat. The first guild to start working on Blackhand. Like in ToT with Dark Animus and Siege of Orgrimmar with Siegecrafter it felt like there wasn't going to be many more guilds who also would kill the boss until the next reset, but we were wrong before and now we also had a better contender with Paragon back in the competition. When progressing on a new encounter there is like a magic lever which flips on when one guild kills it. When you know that the boss is killable and everyone truly believes in it, then everyone performs much better which is exactly what happens when the first guild kills it.

Guess it wasn't too bad with 127 wipes for 2 kills when it was the world first?

But this really was a nice encounter, it ended up being only Paragon who also killed it that reset. For the next kill we would have to wait 4 more days. We were back at the top where we belong and morale was extremely high. We moved on to Blackhand.

My initial idea for this article was to fit Blast Furnace and Blackhand into the same episode, but I ended up typing too much about Blast Furnace, so the ending will have to come the next week! :D