Some changes to the Onyxia standings as we have GRIZZLY at No.3, Onslaught No.4 and Look Alive at No.5, with GRIND just missing out on the top 5 by only a few minutes!

We have a World 4th on Rag and 3rd on Onyxia, as GRIZZLY take both down, just after Progresses W2nd kill on Ony.

We have a top 3 for Molten Core, with APES, Progress and now Onslaught taking down Ragnaros!

The world 2nd is incoming as KennyMarshes guild Progress is around Garr now!

And here's the 2-pull kill as well:

Onyxia falls to APES as well as they take both WoW Classic World Firsts! 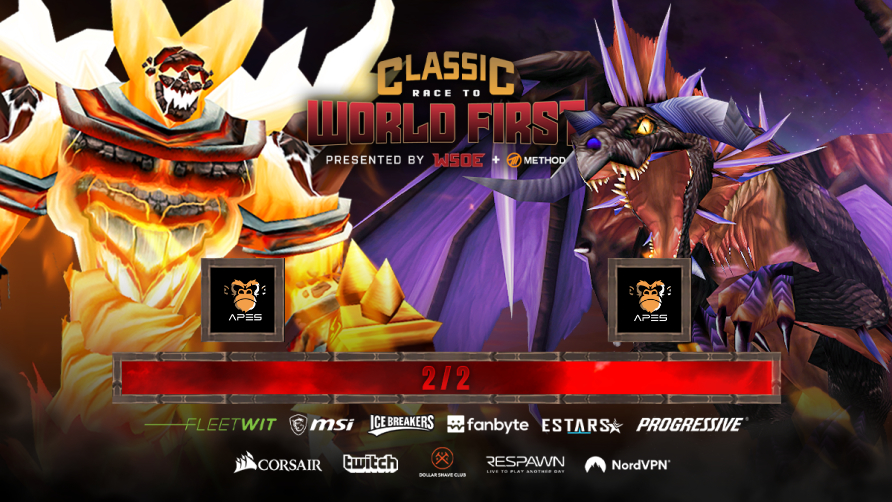 Here's APES' warrior MonkeyNews talking about how it went for them on the earlier bosses in MC:

And APES have done it! World First Classic Ragnaros in one try! Congratulations!

APES are at Ragnaros as it seems they were quite ready when they went in to MC! Check out their progress here:

Meanwhile, in the Method studio, KennyMarsh finally dinged 60, but has been running the MC attunement/reputation grind for a day now, so his guild could also be heading to MC soon.

The big discussion now is what exactly APES are doing in MC, as we don't know how far along the Waterlords quest chain they are, so they may already be done and are actually clearing the bosses with Quintessences ready to go to douse the runes, or they may be on the first, second etc step of the quest that requires kills in MC. Since there's no streaming we can't be sure, but my guess would be they're on the first round of quests that involve killing some MC trash mobs.

We have some Molten Core action already as APES have gone in very recently, with a full 40-man team! Unfortunately they don't seem to be streaming their MC progress at the moment. 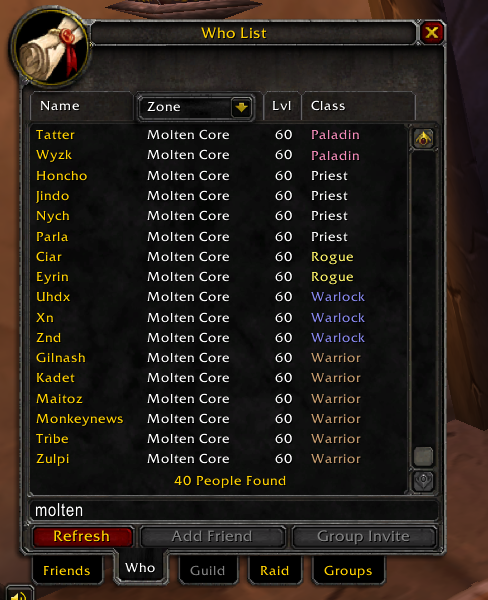 We have a whole lot of 60ies in the West now, with 25 players completing their journey. Here the top 3: 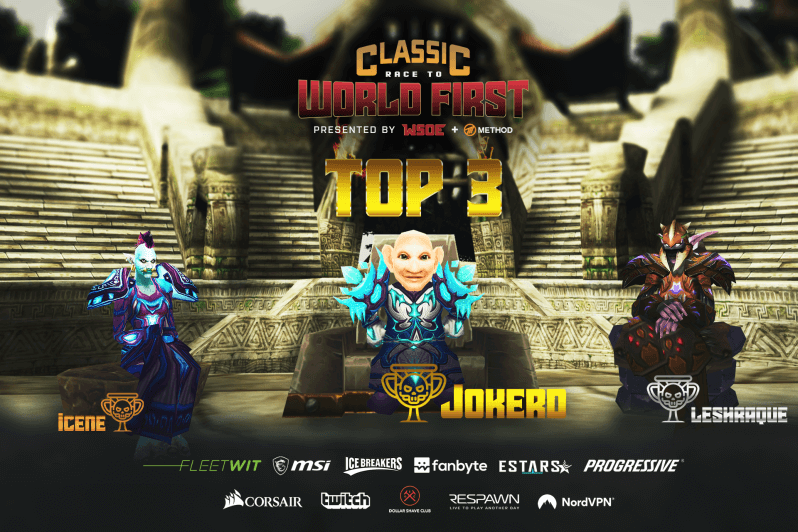 And Jokerd is the World First (West) level 60! Congrats on the winning strategy and a whole lot of commitment put in!

It seems JokerD is indeed going to be claiming the level 60 crown in the West, as he's 40% off level 59, so we should be seeing a ding today! KennyMarsh did go to sleep at level 55 and there are several other players around  level 56 as well.

We're not sure if the Asia servers perhaps already have a level 60 already, as they were in the lead earlier in the race.

We're back to JokerD vs. KennyMarsh in the Western clash, as Joker is some 30% off level 57 and Kenny just got to 55!

The (Western) race has heated up with some people resting and others pushing through as we now have almost 20 players around levels 51 and 52, with JokerD getting some sleep and KennyMarsh cathing up and they are now both at level 52, joined by Buckslice, Zackriledge and probably a few more, with Zack closest to level 53 at the moment. We still don't have any solid info on the Asian server scene, but if they continued as they were going earlier, they're probably still closest to that WF level 60. It seems the dungeon running teams are still staying in Zul'farak as they aren't quite ready for BRD, and the open world levelers are still doing big AoE pulls in the plaguelands.

And here comes the level 51 gind from Jokerd, only 9 more to go!

We have a western level 50, with Jokerd in the lead, followed by many level 48s, including Ahmpy, Leshraque, Hellspawnl and KennyMarsh from the Method studio.

Some more updates for the Westers side of things as Jokerd is at level 46, ahmpy at 45, Nanettie at 44 with the Method stream team topping out at 42 with Kenny as usual. We don't have new info on the Asian server progress but they're very probably still in the lead, depending on sleep and or account sharing.

The top level at the moment is 45, over on Asian servers, with Western top standing around level 42 and the Method crew still ruled over by KennyMarsh, sitting at level 40 and having finally gone to sleep some 3-4 hours ago.

The progress seems to have slowed down as several top players have gone too sleep a while ago and will be back soon, so the max at the moment is around level 43, with the Method studio people capping out at 38.

The progress seems to have slowed down as several top players have gone too sleep a while ago and will be back soon, so the max at the moment is around level 43, with the Method studio people capping out at 38.

We are in the 40ies now as the top levels in Classic at the moment (as far as we can tell) sit at 41 (Çakova, 中国洞 and 연개소문), followed by JourneyWoW at 38 (who's channel we're getting this info from, or rather from his chat) and ahmpy at 36. The Method stream event guys have pushed through level 30, with KennyMarsh alone at level 31.

Level 35 seems to be the top end at the moment, with the streamers in the Method event topping out at 28 and 26!

On the stream we have two level 21s with Tipsout and Kennymarsh leading the way, with Gozu just behind on 20 and his solo leveling strat. Sco and Kungen also managed to get in and are sitting at level 12 together.

As soon as maintenance finishes it's going be another race to who can log in first, with the queues not getting any smaller on these high pop streamer realms, so let's wish them the best.

The NA servers have gone down for maintenance so the streamers will be taking a bit of a break. Meanwhile we do seem to have a level 30 already off-stream, as apparently a Russian warlock has managed to get past the 20ies!

The night has come and gone and the queues are here to stay it seems, at least on the popular/streamer realms. We have enreted the dungeon grind phase of leveling with Ragefire Chasm getting quite the workout and we do already have plenty of level 20ies out there, with a max of level 28 at the moment!

The Method studio in Vegas has it's first level 10! Congrats to Guzu!

The first level 10s are fast approaching as many people are stuck in hour-long queues, including Kungen and Sco, who still haven't been able to even enter the game, as Blizzard try to fix the issues.

We are aware of, and as our top priority, we are working through issues that some players are having logging into WoW Classic, including the 'World Server Down' error. Thank you for your patience.

The servers have now gone live and the queues are pretty staggering!

Want to know how long the #WoWClassic queue times are? Faerlina and Herod has over 20,000 people in queue right now. All servers here: https://t.co/UUFMlQ1XD2 pic.twitter.com/j58IGwcWuE

Here we are with a weird one for the history books, as Onyxia and Ragnaros will be the first raid endbosses to be re-killed by different guilds World First!

The competition in WoW Classic is going to be very different from what we're used to here in the WF race, as progression is taking on a very different shape. The race will actually start immediately when Classic launches on the 26th and will mostly be about the leveling - since the assumption is that the bosses will basically go down immediately when 40 level 60 players head into the raids. World Firsts themselves will be hard to estimate since there's no armory API, so no exact kill tracking will be available either - we'll just have to eyeball it, which is why we decided to only put up leaderboards for Onyxia and Ragnaros, instead of the entirety of Molten Core. It's going to be hard enough figuring out who got which spot on the endbosses, let alone who got 4th place on Golemagg in the US!

Since the leveling process is going to be the core of this particular race, we'll also be doing regular updates on where exactly players are on the 1-60 trek, but we'd also appreciate if you guys also wrote in the comments if you know what levels certain groups or individuals are at, because again, there's no real tracking system in place other than just following people's streams etc.

It's going to be a weird race this time around, but I'm definitely excited to see how it turns out and how we can best cover it, so if you have any suggestions or input, do let us know below!