Let me start instance by instance. First of, Throne of the Four Winds. There was this shaman, Azmara. He was generally pretty horrible. However, on the Conclave encounter, he would just f**king shine bright like a diamond, as Rihanna would say. His position was on Wind platform and for those who don't know the fight, the wind boss has a wind beam kind of spell, like C'thun beam or Mimiron's barrage etc, where you just have to move along in order to avoid it. Azmara would die to it EVERY_SINGLE_TRY. I mean it, every try. If we made 15 attempts, he would die 15 times. It was so sad it was funny, everyone would just laugh their asses off on vent every try the second Azmara died. That stupid s**tter was thankfully kicked, but well, according to him "he left because the guild wasn't social". Next up is A'lakir... oh dear god the nightmare this boss was. There were so many people f**king up constantly that I can't even name someone specifically, everyone had their share of f**k ups on this boss. The crown has to go to Deify though, for forgetting his pet on the other side and f**king it up for us more than once.

Next up, Halfus in BoT. Not much to say on this boss, this was too easy to allow for f**ck ups. I do recall me failing an interrupt once but I think that was during Normal modes. Theralion and Valiona though is a whole other case. We tried many strategies with mages going inside, then SPs going inside, then warlocks going inside, then hunters and so on.. and everyone managed to die multiple times. That boss was really entertaining to progress on, watching people die over and over and again and again but no one specific here either that I remember, besides myself. So the boss is at about 2-3% and it's going bad, half the raid is dead but it seems doable since it's so low already. I'm about to die, and I think: okay, time to be pro and show everyone how good engineering is. So I use the engineering belt enchantment, which gives me a shield that absorbs 20k damage. However, it has a chance to malfunction and taunt the boss instead! Long story short, I wiped the raid since I taunted the boss and melee moved out of range and died. On Ascendant Council, however, we had some true stars. There was Aliandramk who would die to everything all the time. There was also this paladin, Komplexa. Every single time he would get the frozen orb, it would be a wipe. He managed to run so horribly that the orb caught up to him and exploded. He even did retarded crap like using Divine Shield resulting in just another wipe. He was thankfully booted shortly after. Then we had Mek who would also die 24/7 on this boss.. oh yeah, I forgot to mention, he returned to the game (he stopped after ICC and came back on Ascendant Council progress to shine!). Then there was this BoP rotation that some people had trouble understanding. You know, you had to BoP a target.. NO CAN DO HOMIE. Too hard for Aldonn. The biggest f**ker was Rivah, however. We wiped when the boss was at 4k HP (that's 0.000001%) and he didn't use Healthstone. Had he used his Healthstone, he would have had time to cast 1 more spell and the boss would have been dead. Congratulations idiot! That's that for Ascendant Council and now for Cho'Gall. I don't remember any specific people screwing up constantly but I do remember Kungen saying that IT'S NOT POSSIBLE TO SPELL REFLECT when every other guild did it. Sinestra is a whole different story. There are two people that I remember and will always remember and hate forever and ever all through the years. The first one is Minci. Minci was a healing priest. He was also a motherf**king retard mongoloid who costed us world 2nd Sinestra kill, wiping us on 3% with the orb beam, since he didn't notice he had it. He apparently paniced too much and paid no attention. It was a sure kill, boss on 4% everyone alive, but no, he just wiped us. We didn't kill the boss until 2 days later world 4th. The other guy is Aliandramk, the "Macedonian" from Fyrom. How he can be Macedonian but live in FYROM is beyond me, but hey, he is so stupid it doesn't surprise me. So this guy ruined the Sinestra achievement (kill it on the first try with 0 deaths) since he died on 2%. Embarrassing. 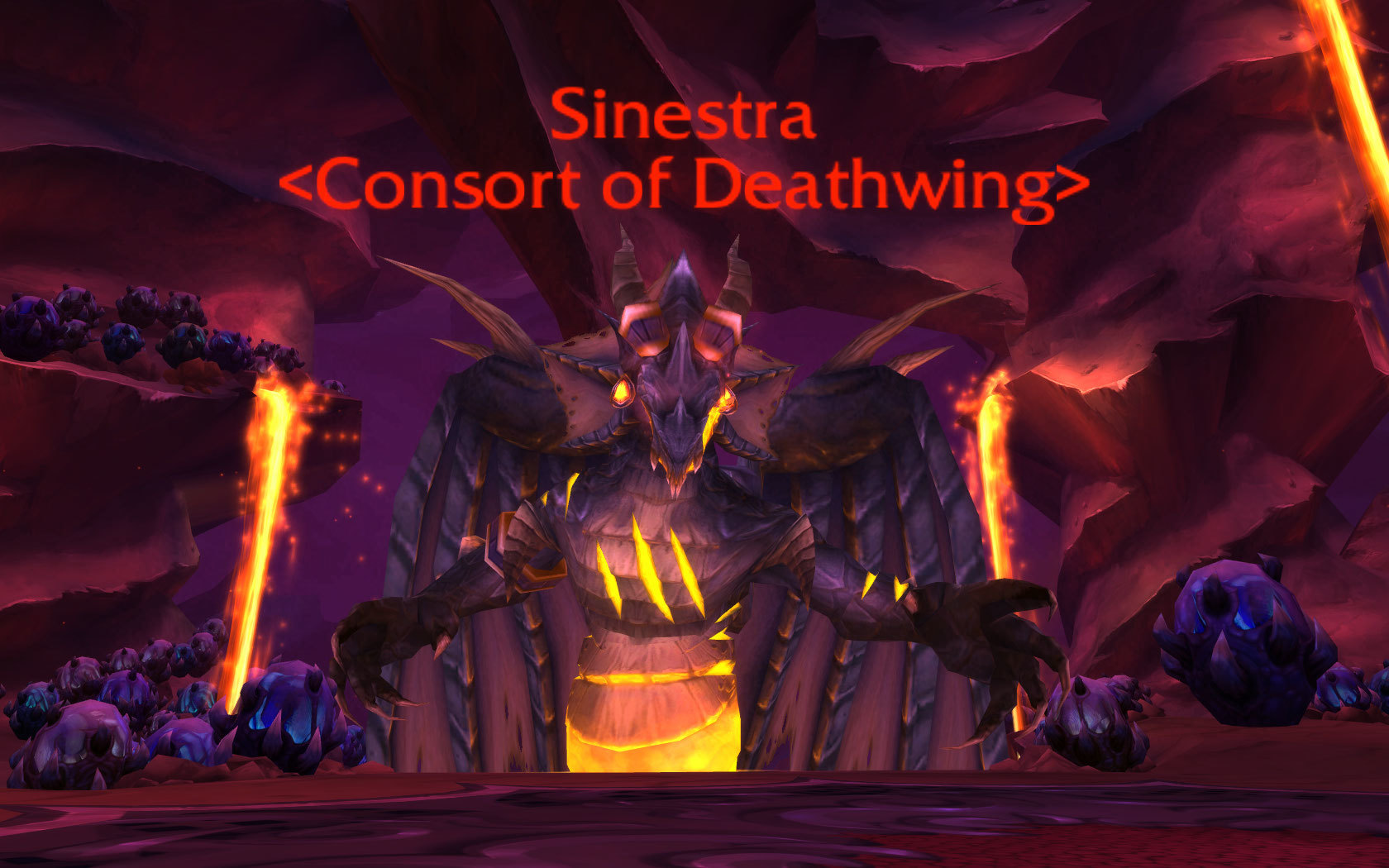 There are two more noteworthy bosses in T11. First one is Maloriak starring Stayven and Ushra. I was watching Stayven stand inside a huge dark pool that puts a dot on you slowly dying as he was talking endlessly on vent giving directions to the other healers and talking nonsense.. when he dies he says on vent : "Wtf how did I die why did I get no heals?" and everyone just explodes into laughter. Ushra was a shaman.. he died during Dark Phase. To a pool. He claimed however that he died to Arcane Storm, a channeling spell that Maloriak casts and needs to get interrupted.. only problem is that he doesn't cast it in the Dark Phase. Liar liar pants on fire, gkick failed trial. The next and last boss worth mentioning is Atramedes. He was bugged in 10 ways and you could choose which way you would like to abuse the boss. Stand at the edge, stand outside the room, stand at the entrance.. this had to be the biggest fail by Blizzard.

And that's that with specifics about T11 progress. Now a few more general notes. First of, Aryu had rerolled tank so it was me and Ekyu playing Mages. I was pretty nervous, as I was competing with one of the best and sadly I didn't perform as good as I would have liked to. DPS-wise I was fine, but certain gimmicks such as Ring of Frost would just make me wanna kill myself and that's where he outshone me. Besides performance  though, we would just constantly fight with each other. He would clearly state his desire to remove me from the guild and he would recruit other mages, telling them to stay away from me since I was getting kicked as a welcome chat. Pretty mature of him eh? Thankfully, Hearnt joined the guild, a brittish mage who performed pretty good until Ragnaros. Another good thing about Hearnt was that he also hated Ekyu. He'd tell me all the bullshit Ekyu would whisper him and we would laugh at his poor attempts to get me replaced together. The reason I wasn't kicked was that Mackzter actually kinda liked him and so did Mek, at least in the start, and I liked them back. Besides Hearnt, I also liked Stayven at the time and also Rivah, a huge mistake of mine, I wasn't able to see through his lies back then, but I was later in the end of Firelands.

Concerning raiding, I was getting a bit disappointed, not gonna lie. Not achieving any world firsts (or seconds) was a huge blow and even more good people quit. I did however attribute that to bad luck (Minci being in the guild is considered bad luck) so instead of giving up I put as much effort as I could in building up a stronger roster by talking to people I knew all over. Sadly, with Kungen and Mackzter quitting and Mek stepping up the guild wasn't getting any stronger. No offence to Mek, he was a great leader, but he wasn't a great player nor that scary leading figure with a strong personality like Mackzter, at least in my eyes. But more about that in the next entry about Ensidia in Firelands.. there's a lot to say about that, trust me.