Welcome to the Mancy Diaries series. It will include a number of entries describing my story from its creation at the start of the Burning Crusade until the end in Cataclysm. It might not sound very interesting at first sight, but I assure you there is a lot of drama, deception, lying, cheating and hating involved that will definitely make for a very entertaining read.

Hello dear readers, it's been a while! First of, a small update: I quit wow a few months ago since I no longer had the time nor the desire to play at a high level. As I was chatting with some friends a few days ago, the topic went to WoW and how much time I spent playing it and then to how I got around to playing at a competitive level. As I was narrating the story, I realized it was very exciting so I decided to give publishing it on Manaflask a shot, so here it goes.

Since I was playing a warrior in Vanilla, I won't talk about that besides the fact that I managed to join Genjuro's best guild The Alterac Deviants and played there for a while (this is relevant). Alright so, let's go back to January 2007, the day the Burning Crusade was released. Disliking the DPS warrior's playstyle (unable to deliver max DPS due to threat issues) and disappointed at how hard it was to find a guild as a DPS warrior, I had decided to re-roll a Blood Elf (female of course) Mage. I dragged a few RL friends who had recently started WoW with me but they sadly quit during the leveling marathon. 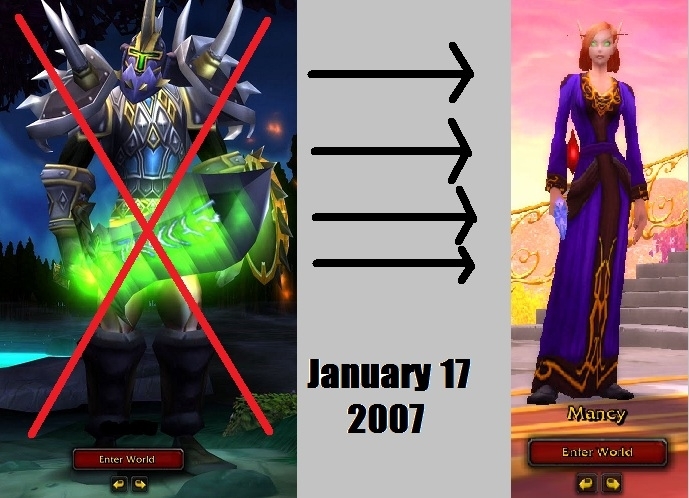 With Auchindoun being a new tBC server, everyone was leveling and that made the leveling experience pretty interesting and competitive. Besides that, you got to meet a lot of people while leveling, people you would meet again at higher levels. I won't bore you with that, but I'll just say that I wasn't that fast at leveling, mostly due to my friends holding me back before they quit. So I reached level 70 and started gearing up and farming reputation. Everything was going smooth, I was spamming dungeons all day long, but there was a problem: I was unable to find a guild. It was impossible. Since I wasn't fast at leveling, every proper raiding guild was full on mages so I couldn't do anything at all. But I'm not the kind of guy to give up that easily. Can't find a guild? Well then, maybe I should form one. And so I did, with people I met during the leveling stage. We gathered a few people, started doing guild runs and then found a guild ready to disband we merged with. Being a 13 year old means you aren't that good of a guild leader, so that guild didn't end up well. I would constantly argue with other officers because things didn't go my way and generally I was acting like a kid, which I was. At some point arguing was so intense that the guild disbanded, but I did manage to get some gear out of it - one of the benefits of being a guild master in a loot council-deciding guild. With my new shiny epics I started applying to a bunch of guilds and managed to join the server's best. I was really happy and excited, couldn't wait to get to raid again. All my happiness and excitement was gone the following morning however, when I found out I was kicked out during the same night I was invited, since the aforementioned officers of my previous guild were friends with the mage Class Leader of the new one and lied about me ninja looting some stuff (which is not something I did). And there I was, guildless, with a f**ked up reputation. That's when I decided to migrate and started applying to many, many, many guilds.

Obviously, I had to lie about a lot of stuff such as my previous guild history and my age, couldn't really get accepted at the age of 14. My next guild was Horizons on Genjuros, horde side this time. One of the main reasons I was accepted was the fact that I played in The Alterac Deviants for a while, which as I said was Genjuros' best alliance guild and thus Horizons' arch rival. I played in Horizons for quite a while, all through Karazhan, SSC and TK and until we killed the first boss in Mount Hyjal. Let me share some... interesting stories.

Firstly, since I lied about my age, I wasn't able to use a microphone so I was using the "it's broken" excuse. After some months, I was pretty much forced to buy one. And let me tell you, the voice of a 14 year old sounds a lot different than the voice of a 21 year old, which is the age I said I was in the application. I did have some issues with that, but I said that I just have a thin voice and they shouldn't laugh about it and should be sympathetic instead. It somehow worked and I wasn't booted. Another interesting story is my constant fighting with my Class Leader, Pook. I disliked that guy since the very first moment, as is the case for all my Class Leaders, I just hate them. Anyway, I would fight with him and most of the time, I'd be wrong. Our biggest fight was about hit cap - he said I should get it, I said I wasn't missing at all so I should get crit and sp instead. He was like, are you crazy hit is the best stat, I was like, okay, maybe for you but I don't miss. It's retarded how stupid I was, but I was lucky as f**k and that guy was bad as f**k so I managed to outdps him on every single fight and I was like, see, I was right all along, which is something that made him ignore me and hate me forever, can't really blame him though, can you? Besides that and me being a kid getting offended by flames, I had a nice time in Horizons. I experienced playing in a "proper" guild for the first time and liked the feeling. I think the peak of it all was Kael'Thas progress. Besides my inability to properly CC mobs since I had no clue what /focus was until the guild master Cubensis explained it to me, I felt really excited playing the game for the first time. Slowly progressing in that fight with a mediocre guild  was an amazing experience, going phase after phase and finally killing it was the turning point for me - I realized I loved the game and I wanted more out of it, so I decided it was high time  I looked for another, better guild.

And so I started applying to every single available guild again, filling my application with some more lies about my age. Somehow, for some reason that I can not understand whatsoever I was accepted to Perfectly Sane - a top 50 guild as far as I recall, which had just killed Illidan. Why in the world they would recruit me is beyond me, but hey, it turned out well. I received a warm welcome and developed pretty good relations with the guild master Jogwe and an officer Nightsong or Nightwish, something like that. In Perfectly Sane I started developing as a player, I realized I _HAVE_ to get hit cap (Illidari Council ensured that) and also got in my head that me dying is not always other people's fault.

There are some interesting stories about Perfectly Sane as well. For example, Tempest of Chaos, a sword from Archimonde that pretty much every Mage and Warlock needed. I had a horrible weapon so I was saving DKP for that - me and another warlock, Eredar or so, who had like 20 DKP more so he would get the first one and I would get the second one. For that reason I would get pretty much 0 caster items, since caster items didn't want to drop in Perfectly Sane. There was one incident with a pair of bracers between me and a friend warlock Siphera, I bid and he was alt tabbed, so after a few seconds and before the master looter called it I looted the item at minbid. He then whispered me about it, I said well I thought you didn't want it, I can open a ticket if you want, expecting him to say something along the lines of "nah, it's ok". Well, he didn't and wanted me to submit a ticket, so I acted offended going like "Nice friend you are, I didn't expect that from you, making a deal out of a pair of bracers, f**k off I'm not submitting anything" and that was that. Back to Tempest of Chaos though. I swear, that item would never drop. I mean, never. We were farming Hyjal for months and I never ever saw it once. One day Eredar couldn't raid, so it was me for the sword. I crossed my fingers, prayed, begged... And guess what. It dropped! How exciting! Oh yeah, I forgot to mention I lost my internet connection at like 2% so some other guy looted it for a ridiculously low amount of DKP. I almost killed myself that day. To finish that story, let me say that it never dropped until the guild disbanded at some point, about 3-4 months before Sunwell was released.

Another note-worthy thing about that guild is the strong hate developed among the mages and me. I don't remember how it started, I just remember two of the mages had me on ignore and the other guy hated me extremely much, but didn't want to ignore  me as he was trying to get promoted to officer - which he didn't. Anyway, as I said, after a few months of farming the guild disbanded. I was really sad, as I loved that guild and it was my first "real" guild, but hey, what can you do, at least I had the experience and the gear to move on. I was also starting to develop as a player. I would no longer constantly f**k up and blame others for it. Sure, my playstyle was still unconventional and I had a lot of improvement ahead of me, but I was starting to become a solid raider.

I believe this sums up the first entry. Not a lot of drama yet, but expect a lot to come in future editions, referring to The Legacy and Ensidia. Coming up next is the continuation of Mancy's journey in tBC, Mancy's adventures in WotLK beta and more.